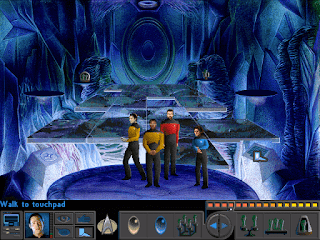 Star Trek of course needs no introduction, and being the staple of pop culture it is, it's had numerous forays into the realm of gaming since video games were first a thing.  Interplay had a couple of popular and successful games that melded ship combat and point-and-click adventure together, but for my money, the best game in this format was Spectrum Holobyte's entry, A Final Unity.  It looked great, had some impeccable writing on par with later seasons of the show, and it even had the cast reprise their roles for all the cutscenes, which perfectly immersed you in the atmosphere and storytelling.  There were also some tactical combat segments, though these are regarded by many fans as the weakest part of the game.  Still, it wasn't enough to tarnish the game's charm and, like Trek itself, it's a great experience that holds up well today.
79. Out of This World (Delphine Software, 1991) 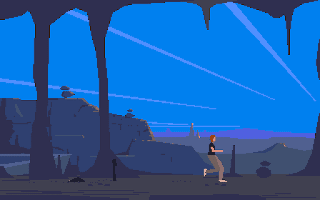 Also known as "Another World", this was a game created from the get-go to be a Dragon's Lair-esque cinematic action adventure on a much lower budget.  Utilizing vector graphics instead of drawn cels, the game's visual design had relatively little detail but very smooth animation, giving it a nicely cinematic flair regardless.  The end result was certainly distinctive and memorable, adding a grim yet beautiful aesthetic to the game and its many, many death scenes.  The gameplay was also quite solid, if heavily trial-and-error based as you tried to solve puzzles, evade enemies and figure out the correct sequence of events in order to survive another melee with aliens and see your way to the end of this strange tale.
78. Heretic II (Raven Software, 1998) 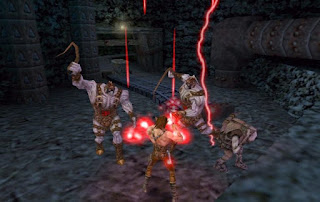 Most people know about Heretic - a pretty popular dark fantasy take on Doom - but not too many people know it had a sequel.  Mostly because it didn't sell particularly well and, owing to a dispute over rights to the game, it has not resurfaced on any digital distribution stores.  Which is a shame, as it's quite a unique and fun experience in its own right.  A third person action game that takes a few cues from Tomb Raider, with some polished platforming mechanics and a bit of focus on puzzle solving.  It doesn't lose sight of what made the original popular, though - after all, it's built in the Quake II engine, which lends itself perfectly to fast-paced projectile-slinging action against hordes of monsters.  Even melee brings some clever mechanics, with sweeping blows that deal heavy damage (and gory finishers) to enemies and even letting you use your staff to pole-vault, which both serves as a longer jump and a powerful mobile attack.  Heretic II is far less famous than its predecessor, but no less fun.
77. Command & Conquer: Red Alert 2 / Yuri's Revenge (Westwood Pacific, 2000) 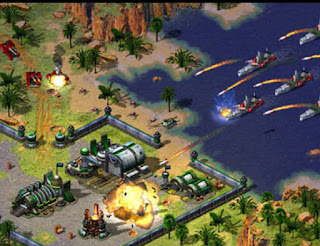 Red Alert is an offshoot of Command and Conquer that takes its concept much more into comic book territory. Beginning with Albert Einstein creating a time machine and using it to assassinate Hitler before he ever rises to power, he inadvertently creates a new timeline where the USSR becomes a global threat. That story gets taken even further in 2, when the ambitious USSR agent Yuri causes them to rise again and invade the United States, but has rather megalomaniacal ambitions of his own as well. The gameplay remains largely unchanged from the originals, though it's made more fun by some of the sillier units you get to command this time - from giant squids to dolphins to giant brains on tank treads that mind control your enemies, both the silliness and the badass factor are ramped up to eleven, but still as intense and strategic as ever. Sadly this was also the last great Command and Conquer, as like so many other companies of the era, Westwood was bought out by EA and turned into a soulless sequel wheelhouse until they became unprofitable and were scrapped.
76. Shadowgate (Zojoi, 2014) 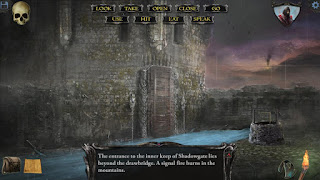 An updated remake of the classic point-and-click adventure game from the 1980s, Shadowgate's 2014 iteration was downright inspired.  The game's narrative was significantly expanded over its predecessor, new puzzles and obstacles were added, and elements of the original were changed up a lot, meaning that the old solutions to  puzzles no longer work (and, in fact, will frequently result in your death).  The game also features multiple difficulty levels that further shuffle puzzles and clues as well as lend some replay value to a genre largely lacking in it.  And of course, the remixed music and updated visuals effectively portray a grim atmosphere that only makes the game's story even more compelling.  Bring on the remake of Beyond Shadowgate!
75. Superhot VR (Superhot Team, 2016) 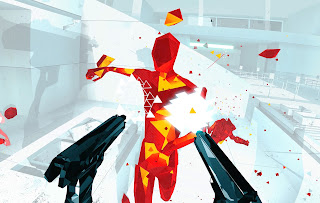 The original just barely missed making this list (its console counterparts being released just over two months after the original on PC), but Superhot VR doesn't, and honestly, it's a much more engrossing experience when you're right in the thick of the game's action.  The gimmick of Superhot is a clever one - it's a shooter where time only moves when you move.  This results in a lot of slick, stylish slo-mo flair - weaving between bullets, shattering enemies with punches or improvised weapons (from bottles to ashtrays to thrown knives and shurikens), parrying bullets with your own guns or slicing them apart with knives, snatching a dead enemy's gun out of midair and returning fire at his distant buddies, emptying the clip and tossing the gun to take out another bad, and so forth.  It's a brilliant blend of trial-and-error puzzle solving and surprisingly intense action that's utterly exhilarating to experience.  The whole experience only lasts 2-3 hours, but it never stops being a constant adrenaline rush until the credits roll.
74. Loom (LucasArts, 1990)

Another excellent point-and-click adventure from LucasArts, Loom takes the player on a trip through a wonderfully-realized dark fantasy world full of striking visuals, dense lore and an unforgettable cast of characters.  Some surprisingly unique mechanics, too, as you don't really follow the usual pick-up-an-item-and-use-it-elsewhere format seen in most games of this type.  Instead, you utilize Bobbin's distaff and play magical 'drafts' with a variety of effects; turning straw into gold, opening things, dyeing objects, and so forth, and often you can play them backwards to get the opposite effect (though some are palindromic and thus cannot be used this way).  Some inspired voiceover and detailed VGA visuals (for the later versions) completed the package and made it a delightful experience.
73. Jazz Jackrabbit (Epic MegaGames, 1994) 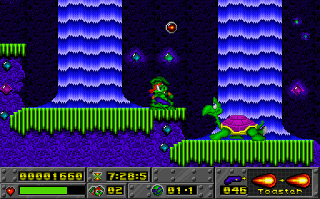 Probably the first PC game I can remember really being blown away by, proving that computers could have games that were just as fast-paced, colorful and smooth-playing as anything on a console. Jazz Jackrabbit obviously draws a lot of inspiration from Sonic with its colorful environments, mazelike levels and fast paced design (even utilizing similar 3D bonus stages to Sonic CD), though it works in a touch of run-and-gun shooting action too, giving you a number of different weapons and powerups to utilize and plenty of enemies to blow away with them.  Cap that off with a fantastic soundtrack and you've got a genuine shareware classic.  It also had a sequel a few years after, but I don't like that one nearly as much; the weird unintuitive level design, jerky physics and often-unresponsive controls make it much less fun and memorable than the first.
72. Half-Life (Valve, 1998) 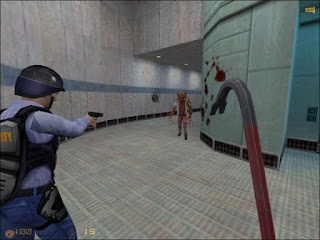 First person shooters were the new hotness in the '90s, and it seemed like every one was upping the ante, trying to maintain a fun, fast-paced style but working in more story elements and realistic environments to play in.  Half-Life was certainly no exception, and for 1998 it was nothing short of mindblowing.  Set in a research laboratory overrun by hostile aliens (and later soldiers trying to cover up the incident that unleashed them), the environments you trekked through had a ton of personality and danger in themselves.  From tram tracks to vats of toxic waste to all sorts of hazardous industrial equipment, there was just as much of a puzzle element in safely navigating them as there was in defeating the enemies.
71. Symphony of War: The Nephilim Saga (Dancing Dragon Games, 2022) 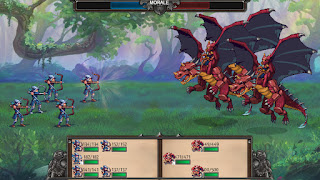 Another example of a game clearly inspired by classics of the genre (Fire Emblem and Ogre Battle in particular), but which ends up being so well-made that it stands out and becomes a fantastic title in itself.  Case in point, you move across the map with your squads (consisting of up to nine units of varying classes), capturing towns, utilizing strongholds and terrain to give themselves an advantage in skirmishes, and exploring characters through mid-battle dialog scenes. Battles get surprisingly large in scale (sometimes overwhelmingly so), though you get powers to do things like grant units extra turns or deal damage over a large area to help speed things up or get yourself out of a jam.  A wonderful and engrossing strategy RPG.
Previous - Next