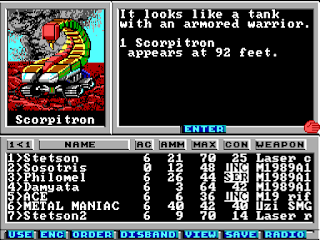 Most RPGs from the '80s were heavily inspired by the likes of Dungeons and Dragons, but whether due to technological limitations or just a mass case of carbon-copying what was selling well (or both), they usually just focused on the dungeon crawling and combat and exhumed most, if not all, actual role-playing.  Wasteland was an early attempt to reintroduce that by not just giving you combat skills to master, but a bunch of other creative ways to interact with your environment - lock picking, safecracking, alarm and trap disarming, sleight of hand, metallurgy, and even some very niche ones like Cryptography and Toaster Repair (which is more useful than you'd think).  It wasn't the most fleshed out of worlds, though, so not every skill was very worthwhile to have, and it still put heavy focus on combat so you couldn't do a purely diplomatic or stealthy approach to most problems. But, it was a solid attempt at expanding beyond the tropes of the day, and it told quite a fun story with a quirky sense of humor, even if you did have to have the manual handy for much of it (and it included quite a few fake passages with bogus passwords, so just reading straight through it wasn't an easy cheat). A fine precursor to games like Fallout.
89. Lode Runner On-Line: The Mad Monks' Revenge (Presage Software, 1995) 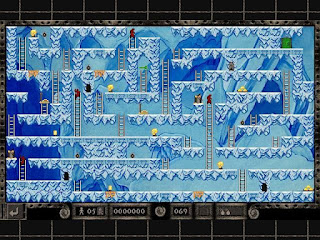 Lode Runner was a pretty popular game in the early days of computer gaming and spawned a ton of ports, sequels and updates, even getting an arcade version at one point.  On-Line is a tuned-up version of 1994's Lode Runner: the Legend Returns, fixing numerous bugs and featuring new levels and obstacles, a custom stage builder and online co-op for up to two players.  The core concept remains the same - collect all the gold while evading the enemies, using your ability to dig holes to trap foes or drop to a lower level and escape.  Pretty simple stuff, but as with any good puzzle game, it gets very challenging in the later stages, requiring some very spot-on timing and movement to succeed.  This version is among the most popular too; so much so that it inspired a full fan remake, which also adds four player co-op and gamepad support.
88. Diablo (Blizzard Entertainment, 1996) 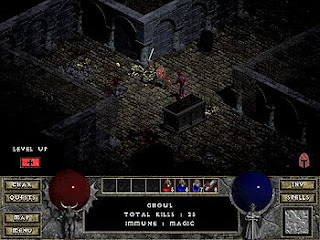 Warcraft and Lost Vikings were fairly popular games in their time, but Diablo is the game that really put Blizzard on the map.  Taking the concept of games like Rogue, adding an action bent and dousing the whole thing in a heavy grim atmosphere, it definitely awed people at a glance. It only became more immersive thanks to its fantastic soundtrack and a surprisingly good story with some high quality voice over, and the fact that you got a random shuffle of quests, items and spells each time you played lent it quite  a bit of replay value. It had an official (though non-canon) expansion in Hellfire as well, adding in several new quests and three new playable classes (though you do have to do some file-editing to make them all accessible). While largely overshadowed by its sequel these days, Diablo is still a very worthy game that is not to be missed.
87. I Have No Mouth, and I Must Scream (CyberDreams, 1995) 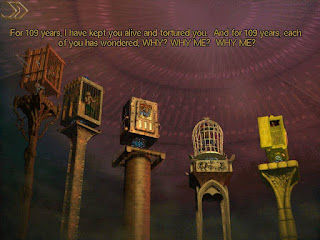 A point-and-click adventure based on the Harlan Ellison story, which sparked quite a lot of controversy for its twisted themes that depicted all the worst elements of humanity.  The protagonists are far from innocent themselves (one notably being a Nazi doctor with a story taking place in a death camp), which only adds to that feeling.  But its themes of redemption and overcoming failure to face a greater evil won out, turning it into a very compelling story even if its puzzles were not always the best and the voice acting was, as per the period, mediocre (save for AM, voiced by Harlan Ellison himself, who is clearly having a lot of fun with the role).  It's recently gotten a number of modern ports thanks to Nightdive, and the original is playable in both DOSBox and ScummVM, so it's well worth a look for fans of good stories.
86. Are You Afraid of the Dark?  The Tale of Orpheo's Curse (Viacom New Media, 1994) 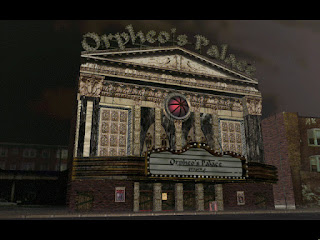 A point-and-click adventure that's fairly obscure, but I got it with a family computer many years back and found it to be a well made and quite entertaining example of the genre.  Based on the Nickelodeon show, the game follows a pair of siblings trapped in a haunted theater who must find a way to break its curse and escape before midnight, lest they become permanent inhabitants alongside a number of other ghosts haunting the place.  It actually does a good job of creating a creepy atmosphere too, with a lot of CGI and live-action stills, some unsettling music and even a few chase sequences with various monsters throughout.  Even the voiceover and acting is surprisingly good for the time period.
85. Might and Magic VI: The Mandate of Heaven (New World Computing, 1998) 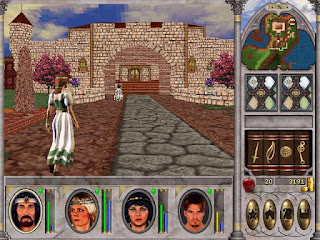 I'm not really a big fan of old school first-person dungeon crawlers; while they are the foundation my favorite genre is built on, they all just feel very samey after a while and, owing to the way they're designed, they all tend to look very samey too.  Might and Magic is at least one of the more memorable names out there with its exaggerated designs, jokey tone and over-the-top gameplay (stats and damage totals reaching into the thousands well before JRPGs would normalize it).  Might and Magic 6 spent five years in development and its gameplay was heavily reworked from its predecessors, having an open world that wasn't locked to a grid, the ability to toggle between real-time and turn-based combat on the fly, and a reworked spell system that allowed for some in-depth party customization (and pretty awesomely powerful high level characters).
84. Castle of the Winds (Saadasoft, 1993)

Dungeon crawlers have always been a pretty PC-centric genre; various attempts at creating them on consoles have always been met with relatively lukewarm reception (Chocobo's Dungeon, Nightmare of Druaga) or relegation to cult classic status at best (Etrian Odyssey).  Out of all of the games in this vast genre, though, Castle of the Winds has to be my favorite, in no small part because it manages to be relatively easy to pick up and play while retaining the challenge the genre is known for.  Simplistic yet charming visuals and a relatively bare-bones yet still captivating story also make it an enjoyable experience, and let's be honest, it's always fun carving your way through an entire swath of ogres or giants and emerging victorious with enough loot to buy a luxurious mansion, only to spend it on some better equipment instead.
83. Heretic (Raven Software, 1994) 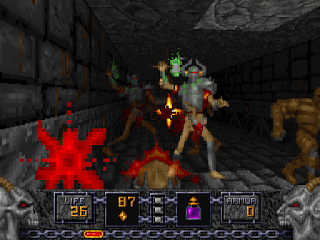 As popular as Doom was, it was little surprise that it would get a number of spinoff games and engine licenses.  Heretic is definitely one of the more memorable ones, taking the basic monster-blasting, puzzle-solving format of Doom and putting a coat of dark fantasy on everything.  Golems, axe-throwing skeleton knights, sorcerers and demons, among many others, stand in your way, while you get several weapons like a magic staff, a triple-firing crossbow, a fireball-launching mace and my personal favorite, gauntlets that launch lightning at your enemies.  More than that, though one could actually pick up many powerups and use them when needed, rather than being forced to activate and use them right then and there.  From temporary flight to powering up all of one's weapons to simply restoring a bit of health on-demand, they were all quite handy to have.
82. Amnesia: The Dark Descent (Frictional Games, 2010) 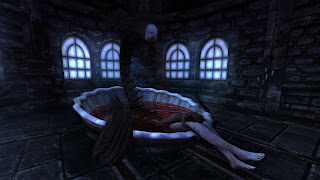 An indie horror title that won a ton of awards for doing what so many similarly themed games fell short with - being genuinely unsettling, tense and creepy.  Putting you in a musty old castle as an amnesiac protagonist, you're left to your own devices at times to wander around and just take in the atmosphere, piecing together what little of the story you can from clues you pick up along the way.  Monsters quickly show themselves too, but unlike most games of this type, you're given no way to fight back against them - you just have to turn out your light and find a good place to hide yourself until they lose your trail or, worst case, run like the dickens to try and escape.  Darkness itself also works against you, though; lingering in the dark too long or witnessing disturbing sights gradually weakens your sanity and causes you to hallucinate or even panic, which can give you away to a pursuing creature.  It slowly builds up the terror in a slick and natural way, making it an incredibly effective horror experience.  I also quite liked its sequel, A Machine for Pigs; though its gameplay wasn't nearly as refined as Dark Descent's, it still brought plenty of its own brand of dread with its more grounded premise in mad science.
81. Santitarium (Dreamforge Entertainment, 1998) 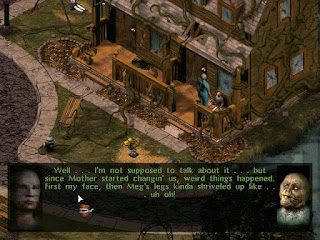 A point-and-click adventure whose name implies that it's going to be creepy and bizarre, and sure enough, it is.  You begin as a protagonist identified only as "Max" who awakes in an asylum with no memory of his past and his face wrapped in bandages, but it quickly becomes apparent that something isn't right - the asylum and its inhabitants (staff and otherwise) are seriously deranged, and venturing throughout it leads him to several surreal and bizarre landscapes, with most seemingly having no connection to his predicament whatsoever.  However, over the course of the game the fragments slowly fall into place and the reasons behind all that you see come clear.  The fact that it accomplishes this without any permanent game overs (it is possible to fail segments; all that means is redoing them, though), having puzzles that actually make sense, and not really even relying that much on gore and violence is a testament to its quality.  Even the voice acting is honestly pretty good for the time!
Previous - Next