This was a challenging list for me to come up with, as I've never really been a die-hard PC gamer by any means. However, I was always fascinated by how different its library was from what I had gotten used to on consoles - for the most part, games on computer platforms, particularly in the '90s era, were a very different experience in that they had so much more ambition to them. Like most of the best-known console developers, they were always pushing technology to its limits, but they also had to contend with a huge variety of different hardware setups and operating systems, which made their games considerably more difficult to develop and run. Still, it was all worth it to play some very in-depth and interesting experiences that consoles simply couldn't deliver, whether due to a more limited player interface or just not having the technological advantages of the PC platform. And of course, it is quite nice to still be able to play nearly all of them today, even if many do require fan patches or virtual machines or some other emulation option in order to run on modern hardware.

The only criteria I chose for this list is that all of my picks must have been designed with a computer system in mind as the primary platform (and have a release gap of at least three months between any console ports), or be PC-exclusive.  Oh, and they have to still be fun to play today, too.

As ever, keep in mind that this are my personal picks and no-one else's.  Oh, and these are by no means the only PC games I like.  Trust me, I had quite a lot of trouble sticking to my rules and narrowing this down to only 100!
A few honorable mentions if that's your sort of thing.
101. Alone in the Dark (Infogrames, 1992) 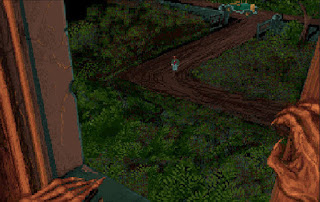 A rare example of a western-developed game that made a splash in Japan; in fact, nearly all of the tropes defined here (tank controls, fixed camera angles, limited items and tons of inventory puzzles)  would later become popularized by Capcom's Resident Evil series, which would go on to become one of the most successful horror franchises of all time.  Alone in the Dark wouldn't fare nearly as well, though, with each game in the series seemingly just getting worse and worse.  The original was still a fun one, though, with some nicely creepy moments even with the comically crude 3D models, a clever storyline and and plenty of traps and horrors waiting to kill you.
100. Wolfenstein 3D (Id Software, 1992)

While not the first FPS to hit the market, Wolfenstein 3D is arguably the one that popularized the genre.  It also remains surprisingly fun for its more tactical design - try to run in and gun everything down like in Doom and you'll probably just get killed.  Instead it's better to take a more methodical approach, carefully peeking into rooms and trying to pick off enemies one at a time, conserving your bigger guns for when you really need them (especially because they burn through your limited ammo supply much more quickly).  As per all the classic Id shooters, it's also rife with hidden secrets, has numerous expansions (both official and fan-made) and a dedicated modding community that ensures it's still being played today.
99. Magic: The Gathering (aka Shandalar) (Microprose, 1997) 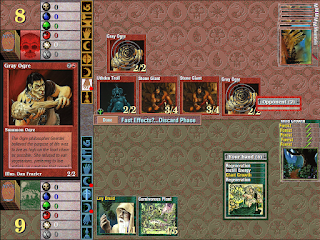 Magic: the Gathering is the granddaddy of all collectible card games, and it began all the way back in the early '90s.  As popular as it became, a number of video game adaptations would naturally follow, including an online game launched in 2002 that continues to this day and incorporates new expansions as they are released.  But before all that started off, Sid Meier (yes, that Sid Meier) created a version of Magic that proved to be quite a bit of fun.  Not only did it let you build your own decks to duel against computer opponents and feature extensive tutorials (with gloriously cheesy FMVs that combined CGI and live actors), but it even had a full-fledged RPG mode where the player tried to save the land from five evil mages, and make no mistake, it was an RPG; defeated opponents would give currency to let the player buy new cards, they would ante up new cards or clues to puzzles as a reward for victory, there were a number of dungeons to earn rewards from (usually in the form of temporary advantages for the next few duels), and one could even upgrade their own character with more starting Life Points and other advantages.  There were even a few expansion sets (Spells of the Ancients, Duels of the Planeswalkers and the unofficial ManaLink) that added new card decks, online multiplayer support and fixed various bugs in the original release. Really cool stuff on the whole, and still surprisingly fun.
98. Simcity (Maxis, 1989) 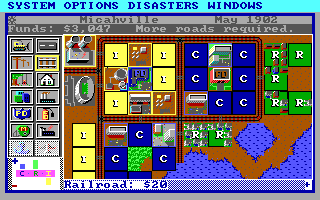 The story of Simcity is a famous one - Will Wright developed the top-down shooter "Raid on Bungeling Bay" for the Commodore 64, but had more fun designing maps with the editor than playing the game itself.  Eventually he decided to take that idea and expand it into a full-fledged city planning and building simulation, and the end result was SimCity.  It doesn't sound like a particularly fun game on paper - constructing your town while managing crime, pollution, traffic, sim health and entertainment - but its addictive design and disastrous events like fires, floods and monster attacks kept it fresh and engaging.  It has also since been made open-source (albeit under the name "Micropolis" due to copyright concerns) and ported to just about every platform imaginable, so you have no excuse not to check it out in some form!
97. Abuse (Crack dot Com, 1996)

A run-and-gun shooter that plays like one part Contra, one part Doom and one part Smash TV, Abuse was like nothing else on PC at the time.  Basically a 2D platformer with 360-degree movement and aiming via the mouse, the game took advantage by having enemies be fast and ruthless and come at you from every angle, quickly overwhelming you if you weren't careful.  Of course, it also took cues from games like Doom with multiple hidden secrets and powerups to find in each stage and even a few alternate pathways to discover. Its source code has also been released, allowing it to get ports to multiple platforms, so there's no excuse to not check out Abuse.
96. MegaRace (Cryo Interactive, 1993) 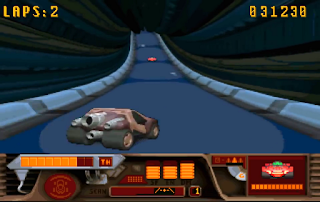 The FMV game genre had a resurgence in the 90s with the advent of CD technology, allowing developers to record and encode videos (usually in very low quality) and stick some gameplay on top of them to create "interactive movie games" (also generally of very low quality).  MegaRace stands out from the pack, though, on the merits of its strong presentation.  While the game itself is a fairly standard combat racer, having the player destroy all the other cars on the track before time runs out, it's wrapped in a dystopian space-age game show hosted by sleazy corporate stooge Lance Boyle (played by Christian Erickson).  Through that, it paints a picture of a zombie-like populace permanently enamored by trashy TV, though with a consistently irreverent and humorous tone that makes it quite an enthralling one to experience.  The great soundtrack by Stéphane Picq is certainly worth a listen in its own right too.
95. The Incredible Machine / Incredible Toon Machine (Dynamix/Jeff Tunnell Productions, 1992-2001) 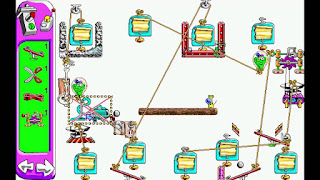 The Incredible Machine franchise is one that saw a lot of iterations (and a relatively recent spiritual remake in "Contraption Maker"), presenting the player with a number of Rube Goldberg puzzle pieces and challenging them to complete goals that varied from stage to stage.  Toon Machine (originally released as "Sid and Al's Incredible Toons") takes that and applies plenty of cartoon logic to everything, pitting the titular characters against one another on the backdrop of a series of puzzles.  To this end, you'll fire catapults, utilize lights and magnifying glasses to burn things, use elaborate systems of ropes, pulleys and conveyor belts to transport objects, and, of course, cause mayhem with anvils, dynamite and bombs.  The between-level cutscenes were also a lot of fun, having Sidney Mouse and Al E. Cat (voiced by Rob Paulsen and Jim Cummings respectively) explain your objectives with bits of animation.
94. Silpheed (Game Arts/Sierra On-Line, 1986-1989) 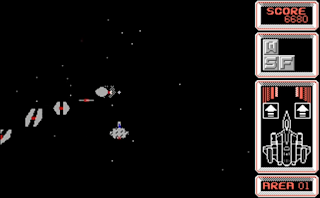 Originally released for the PC-8801 in Japan,  then ported to other computer platforms by Sierra On-Line, Silpheed was a pretty awesome game for its time, with smoothly animated, fast-paced shoot-em-up gameplay that was a pretty rare sight on home computers, as well as some innovative features like interchangeable weapons and even a crude damage model - once your shields were depleted, subsequent hits would damage your engine (slowing your movement and making it more jittery) and even disabling one of your weapons before another hit took you out, which helped ramp up the tension during those crazy battles.  It even had some good, kickass music in its later ports - so kickass that Sierra released a cassette tape demo of how good it could actually sound on a sound card (which wouldn't become a standard computer component until many years after the fact), and even included a $20 coupon for an Adlib card in the box.
93. One Must Fall: 2097 (Diversions Entertainment, 1994)

Fighting games were definitely the hot genre throughout the '90s; Street Fighter II was a huge hit in the arcades, so everyone was trying to make their own similarly-styled fighters to cash in, sometimes quite successfully (Mortal Kombat and King of Fighters being two prominent examples).  The PC didn't get too many well-received fighters of its own, but One Must Fall: 2097 definitely stood out from the pack.  It had style to spare with its anime-inspired characters and story and smoothly-animated robots, and quite a bit of gameplay variety - there were ten robots to choose from, each with their own sets of special moves and flashy combos, and your choice of pilot would tweak their parameters, changing up how they play.  There were stage hazards too (like jets that would fly overhead and bombard the arena with bullets), which definitely kept you on your toes.  The game was released as freeware in 1999, so you can check it out for yourself at no cost.