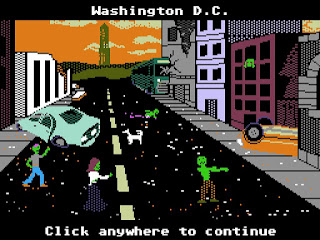 A game which is very clearly a parody/homage to the classic "The Oregon Trail", though it does much to set itself apart too and become a fine title in its own right.  Visually it resembles its predecessor with its low-color visuals and hatched graphics to simulate shading in particular scenes, but gameplay-wise it's a very different beast.  Instead of a wagon you drive a beaten-up car, and you'll frequently have to choose between different routes, fend off attacking bikers or hordes of zombies, and occasionally shoot it out with bandits.  Radiation, infection and vehicle breakdowns are constant threats, and scavenging enough supplies to make it to the end are an endeavor in themselves.  A game that melds humor, grim atmosphere and a constant sense of unease and uncertainty together in perfect fashion, Organ Trail is a fine homophonic homage.
59. Commander Blood (Cryo, 1994) 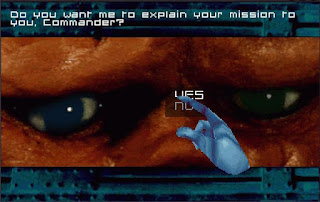 The sequel to the 1988 cult classic "Captain Blood", a game as well-known for its trippy atmosphere and outlandish premise as for its exploration-driven gameplay and a unique, intricate dialog system - picking 150 different icons from the HUD to string together sentences and communicate with the various aliens you encounter.  Sadly that iconic element didn't return for its sequel, but the surreal atmosphere and weirdness certainly did, being amplified by the advent of CD-based FMV.  A combination of CGI animation and practical effects (with all of the aliens being portrayed by puppets), a funky and original eurobeat soundtrack, and some delightfully bizarre characters, visuals and humor make for an unforgettable point-and-click experience.  There was one more game in the series - Big Bug Bang - but as it's only available in French, few gamers outside that part of the world have experienced it. 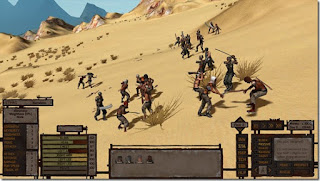 An independent game in development for over twelve years, released on Steam Early Access in 2013 and finally given a proper Version 1.0 release at the tail end of 2018.  So for all that effort, it had to be good, right?  Well, yes.  In fact, Kenshi actually feels like a fully-realized version of Fallouts 4 and 76 in some respects, providing a game that feels like a well-constructed and cohesive whole instead of a mishmash of half-baked ideas in an engine that wasn't really built for them.  Basically an open world sandbox RPG with a real time strategy bent set in an expansive environment that combines low fantasy and post-apocalyptic science fiction, Kenshi is an oddity in that the player isn't a "chosen one" or anything of the sort.  In fact, there isn't really even an overarching storyline - just a complex backdrop and several walks of life for you to start in (from being a lowly adventurer to a holy knight to an escaped slave to an exile from a strange insect-like race) and once you start, you're left to your own devices.  As you play more and more you'll slowly build up your stats and resources, recruit allies, construct bases and steadily make your way to becoming a substantial presence in  the world from basically nothing, and that's always fun.  The strangeness of the setting and the complex, yet intuitive gameplay lend it a lot of charm, and of course, player modding only lets you tweak the experience to your exact tastes.  The kind of engrossing, endlessly deep experience only the PC platform can provide, and Kenshi does it exceptionally well.
57. Stardew Valley (ConcernedApe, 2016) 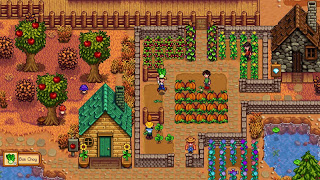 Definitely one of the most highly-acclaimed indie games of recent years, and it's not hard to see why after playing it for only a short while.  Taking everything great from Harvest Moon and mixing in elements of dungeon crawling, town building and of course, plenty of characters to befriend and items to cook and craft.  Hell, later patches even added tons of new content, including co-op for up to four players, and it's never cost any more money than the entry level price.  A work of passion that pays off for both its fans and its developer hundreds of times over.
56.  Interstate '76 (Activision, 1997) 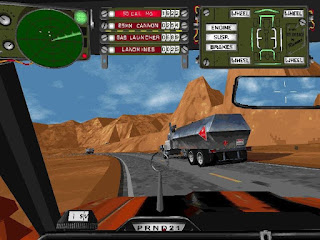 A game that feels like a mix of Mad Max and Mechwarrior (in fact, it uses a heavily modified version of MW2's engine), Interstate '76 was definitely a novel idea.  The execution was quite a solid one too, with a surprisingly good (and well-acted) episodic story, numerous cars to command and outfit, and salvaging parts from destroyed enemy vehicles being a major mechanic in the game - swapping in salvaged parts while your other ones are being repaired is necessary to keep your combat abilities at their peak.  The game also featured multiplayer combat and an addon called the "Nitro Pack" which added 20 more missions, giving you even more chaos for your buck.  It had a sequel in Interstate '82 and a more arcadey spinoff series on consoles (Vigilante 8), but the original remains the best for its impeccable execution.  I76 is also a notoriously tough game to get running these days, as many elements of its gameplay including physics, enemy AI and weapons functioning properly are all tied to its uncapped framerate, but with a little wizardry in DXWnd you can get it pretty close to how it would have operated on a period machine.
55. Shadowrun: Dragonfall/Hong Kong (Harebrained Schemes, 2014/2015) 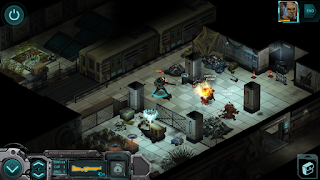 The second and third games in the rebooted Shadowrun franchise, and easily my favorite ones so far, expanding on everything the original brought to the table while losing nothing that made it great.  The story is nothing short of brilliant, bringing together a cast of diverse and complex characters to solve the mystery of their friend's death and the underlying conspiracy behind it.  Throughout the game, every choice you make seems to be the wrong one, making you new enemies and seemingly digging you deeper into a pit you can't escape from, while the combat only gets more intense with enemies bringing out bigger guns, setting up nastier traps and summoning bigger monsters to get in your way.  Stellar stuff all around, and a perfect example of how to do a grim, atmospheric game experience right.
54. Betrayal at Krondor (Dynamix, 1993) 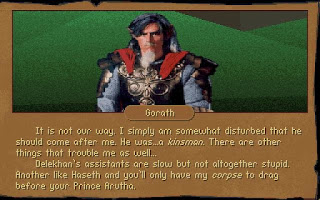 A groundbreaking and influential title in the genre, Krondor was based in the same universe as Raymond E. Feist's Riftwar novels and made a strong attempt to replicate their style, with in-depth descriptions and well-written prose for even the most mundane of interactions.  They definitely didn't skimp on gameplay either - while all of your characters are pre-generated, their skill growth is surprisingly open-ended, improved through active use and paying for training sessions, and you can even choose skills to focus on to have them grow faster.  It was a surprisingly tough game, too - managing stamina and health was a big part of the experience (moreso because all actions and enemy attacks drain stamina, and once that's gone, they start eating into your health, which also drops your stats) and healing felled characters was extremely expensive, meaning that keeping your party in top shape was paramount to success.  It later had a spiritual successor of sorts (Betrayal in Antara) and an actual sequel (Return to Krondor), though neither was as well-received as the original classic.
53. Ultima VII Part 2: the Serpent Isle (Origin Systems, 1993)

The direct followup to Ultima VII (and also the spinoff game Ultima Underworld II), Serpent Isle was also a callback to the franchise's earliest days, returning to worlds not seen since Ultima 1 and showing a world very different and considerably more troubled than the Britannia we've come to know.  The stakes were higher too; not just with the looming threat of the Guardian and his underlings, but a cosmic imbalance is causing reality itself to slowly unravel, adding considerably to your woes.  Unfortunately the game was also the first to really suffer from the EA buyout, as the world feels much more barren and the latter half in particularly very rushed and definitely not up to the series' high standards in design.  Nevertheless, the story is captivating and the solid engine of 7 is tuned up in quite a few ways, making it another very worthwhile Ultima adventure. 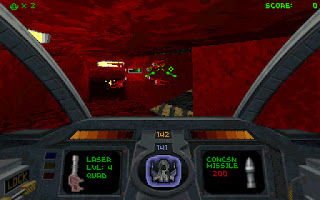 A relatively unique take on first person shooting action, Descent was basically Doom put into the third dimension - you controlled a spaceship that could move and strafe in any direction and were set in a maze full of various robots and traps, tasked with rescuing a number of hostages, blowing the reactor and escaping before the whole place goes up.  It was a bit hard to get used to (especially if you didn't have a flight stick handy and had to make do with a mouse-keyboard setup), but it was visually impressive for the time and it played great once you adapted to it.  The later levels do tend to get aggressively hard, especially when super-durable enemies with powerful hitscan machine guns start to become common, but nonetheless, Descent is a great time. 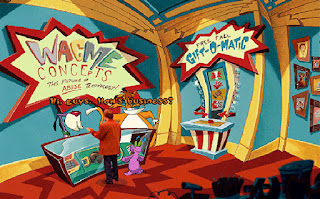 I've played more than a handful of point-and-click adventure games that operate on cartoonish logic, but it always felt rather out of place when they were trying to build a serious atmosphere and story.  Toonstruck definitely broke that mold by putting the player in, well, a cartoon.  Bright, colorful and slightly off-kilter environments, professionally animated characters voiced by big-name actors like Tim Curry, Tress MacNeille, Dan Castellaneta and April Winchell, and starring none other than Christopher Lloyd, digitized and superimposed atop the action like Roger Rabbit in reverse.  There's a lot of genuine talent and brilliant humor on display throughout; it's just a shame that it ends on a very abrupt cliffhanger and, owing to copyright issues, the second part of the story has yet to be released.
Previous - Next