Slaves to Armok: God of Blood Chapter II: Dwarf Fortress (Usually shortened to just "Dwarf Fortress") is a notoriously complex, yet nonetheless very popular sim game with heavy roguelike elements.  Dwarf Fortress is notable not just for its gameplay, but for the fact that it generates an intricately detailed game world for you to play in - from the landscape to the history and backstory of every single character within it.  As the player, you basically just get a handful of dwarves, have them construct a fortress, and have them try to survive everything that comes at them, from monster raids to natural disasters to all manner of other factions trying to make your life difficult.  There is a free-form adventure mode too, wherein you create a character and just undertake quests of all sorts, seeing how long you can survive and gain glory through battle, with a surprisingly intricate combat and injury system keeping things interesting and constantly shocking.  It has some strange bugs and is almost impenetrable without a wiki, yet it's a strangely addictive experience nonetheless.  Those who play Dwarf Fortress swear by it as one of the best games ever made, even in its perpetually unfinished state. 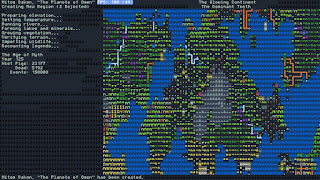 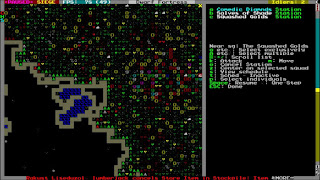