Ravages of Apocalypse was noteworthy for being a fan-made total conversion of Quake that was officially licensed by Marvel Comics and sold in stores.  It was not exactly known for its quality, however.  Some baffling decisions are made with the player's loadout, for a start - your shotgun mode can only fire two shells at a time before a long pause is required to reload, mimicking a real double-barreled shotgun despite obviously not being one.  Shotgun and machine gun modes both use the same ammunition, rendering the latter rather useless as it's far less efficient.  Your flamethrower is in the same boat, launching balls or streams of flame, the latter of which eats through your ammo supply in record time.  Level design is mediocre and the experience is made overly difficult by a general lack of power-ups, so even the easiest setting is very tough to complete without copious quick-saving.  Still, it is at least emblematic of the time period - a violent, edgy take on all things inherently cheesy about the medium of comics - and that makes it good for a laugh in my book.  This is especially evident in the overall premise and the player character themselves - a cyborg created by Magneto who has guns for arms, immolating and blasting bloody holes in evil clones of the X-Men.  One nice touch, though, is that the clones do retain the iconic powers of their counterparts.  Wolverine will slowly regenerate health and even come back to life after death, Cannonball is invincible while in-flight, and Archangel can use his metallic wings to shield himself from all explosive damage, to name a few.  Not to mention that you have to admire the dedication of Apocalypse's scientists, who continue working away on their terminals, completely undeterred, even after you burn all of their flesh off with a flamethrower. 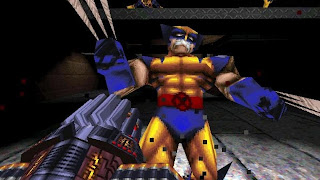 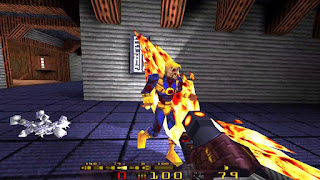