An edutainment classic for the fact that, based on history or not, it was also just a damn fun game.  It blended in elements of roguelikes with its randomized events and an emphasis on challenge, daring the player to start as a poorer character for the payoff of a large score multiplier at the end.  There were multiple pathways and some twitch gameplay segments too (hunting and sailing down-river), so those more used to arcade action had something to like too.  Just a fun game to play in general, and the fact that it's had iterations dating all the way back to 1971 and continuing to this day speaks to its timeless charm. 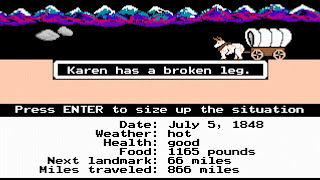 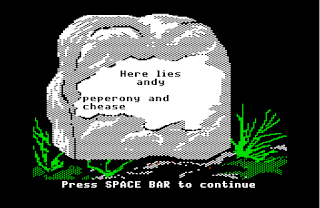 That poorly-spelled tombstone was saved on a disk that ended up being widely pirated and appears on almost all archived copies of the game, becoming nearly as iconic as Oregon Trail itself