The original Simcity was the brainchild of Will Wright; working for Broderbund in the 80s, he designed "Raid on Bungeling Bay", a game where one must blow up several factories before the Bungeling Empire's weapons become too advanced and overwhelm them.  After spending more time playing with the map editor rather than the game itself, he decided to take the concept of building a virtual city and flesh it out into a full-fledged game, and the result was ingenious.  While it hardly sounds exciting - growing your city while managing sim health, pollution, traffic and cleaning up after natural disasters - its simple UI and staggering depth made it a game that was easy to lose hours to.  It spawned several sequels and a whole lineup of "Software Toy" games like SimAnt, SimEarth, SimTown and the monstrously popular "The Sims", but the original remains a classic, and just as fun to play now as in 1989.  It's source code has since been released too, allowing it to be ported to numerous platforms and even playable in your web browser (though it was rebranded as "Micropolis" and other names owing to copyright concerns). 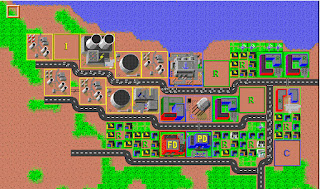 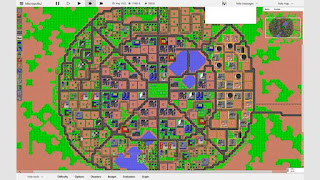