A top-down shooter heavily inspired by the likes of Robotron 2084 and Smash TV, Hyper Princess Pitch is also well-steeped in manic energy and sporting a twisted sense of humor; with a variety of bizarre weapons, from a Brick Gun to bouncing rainbow shots to a short-ranged icethrower, she sets out to the north pole to defeat Mecha Santa and stop him from spreading Christmas cheer across the world.  There are a large variety of collectibles and powerups throughout, as well as a powerful piledriver that destroys all enemies in a radius and temporarily keeps the player out of harm's way, making it a very effective tool when used well.  While it's not a particularly long game, completing various difficulties unlocks more options to play around with, and the action gets truly intense on the higher difficulties, making it a game that's adjustable to any skill level. 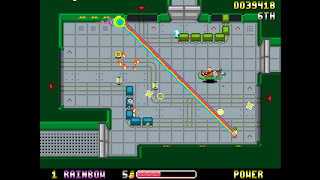 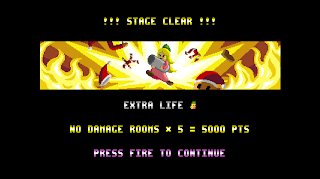