A free-to-play Diablo-like for the PC (also on XBox One as of 2017 and Playstation 4 as of 2019), and quite a good one at that.  While overall its gameplay is similar - having a player pick a class and battle their way through dungeons full of enemies with a relatively simple point-and-click itnerface - it brings a lot of unique twists too.  First is that there is no proper "money" system in the game - trading in goods earns you fragments of identify scrolls, or stones that do various things like add new properties to equipment, shuffle equipment properties, or change the color of spell slots (which in turn affect what skill stones can be used in conjunction with it).  Skill stones work somewhat like Final Fantasy VII's materia system, granting you an ability only as long as it's equipped on your character somewhere and leveling up independently to increase its power.  Leveling itself is strange too, working somewhat like Final Fantasy X's sphere grid - you spend points to unlock nodes on the grid that give you stat boosts, greater damage with certain weapon types, etc..  Character growth thereof is almost entirely free-form, letting you truly customize your character any way you wish.  Basically, it's a game with so much depth and longevity that it's a little hard to believe that the only stuff you pay real money for are cosmetic items.  Well worth a look if you're into this style of game. 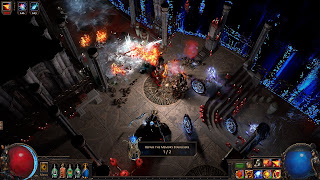 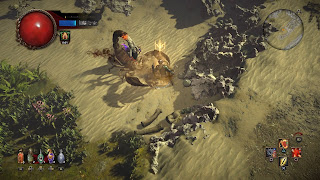