"Tiny, hard-to-see boxes in a huge sprawling location" is Dark Cloud 2's "Needle in a Haystack".

I went ahead and got Olivie off-camera. She's probably the most involved character to get, mostly because you do have to raise yourself a fish and win the Beginner's Class of the Finny Frenzy minigame.  But of course, be sure you talk to her in the Palm Brinks town square first, when there isn't an event going on. 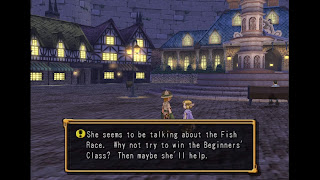 To do that, you can keep your fish in the tank and feed them various types of bait to boost their stats one at a time, but the much more expedient option is to breed fish; the child will always be stronger than its parents (Basically, it's the stats of the stronger parent + 1/7th the stats of the weaker parent, rounded down).  You do have to take the newly-bred fish back to the Rec Tank and feed them five times before you breed them again, and they can be fed once every 2 in-game hours (2 minutes in real time).

So go through that process a few times until your stats are all 20-25, then enter and you should win the Beginner's race without a fuss.

(Fish breed, length, weight and personality type don't seem to make a significant difference, but I recommend "Come out Fighting" as your tank choice before the race) 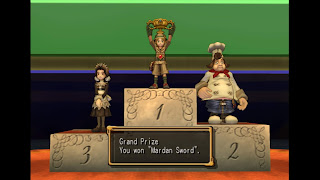 You can occasionally get some decent prizes out of this minigame too - gems and coins among them.  I got the Mardan Sword this time, which is a rare sight but overall not very useful.

Anyhow, once you take first place in the Finny Frenzy, go back and talk to Olivie and she'll join up.  She's notable for being the only character who sells Lures, which can in turn allow you to win the fishing contests rather easily (equip a Minnow lure and fish for Kaji in Veniccio - they can easily weigh over 10,000k apiece!).  Her party ability also boosts both characters' strength temporarily (same effect as using a Stamina Drink).

Odds are she'll also be the last character you recruit.  Once you've recruited all 20 characters in the PS4 port, you'll get a trophy.