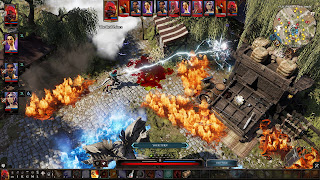 I never had much interest in the Divinity series; they all just seemed like mediocre knockoffs of games that came before them at a glance, and judging from the unimpressive reviews most of them have gotten, I'm not too far off in that assessment.  Original Sin was allegedly their big breakout title, but I didn't much care for it either; the constant bugginess and jank, inane dialog and slow, tedious combat just wore on me before long.  However, Original Sin II is where they finally got things right.  It takes the inventive and playful ideas of the original game and puts them in a smooth, responsive engine, and it actually becomes a ton of fun to explore the world, find hidden secrets and clever ways to reach out-of-reach items, and enemy battles are used more sparingly so you don't get utterly sick of combat within the first dozen or so fights.  But when it does happen, it's a thrill to turn the field of battle to your advantage at every opportunity - dropping oil and setting it ablaze, teleporting enemies into spikes or fire fields, channeling lightning through mist, knocking them out with chloroform and backstabbing their friends, to name just a few.  The narrative is also vastly improved this time, with far less grating party banter and voiceover, genuinely engaging and witty dialog and a plethora of well-written and interesting pre-fab protagonists (and you can still create your own if you choose).  Some of the other mechanics are also unique and downright inspired; conversing with animals, eating the dead to see their memories; even the ability to choose the dominant instrument in the music is something I've never seen in another game.  Hell, I don't even mind the crafting as much now - it actually makes sense and doesn't just turn the game into a tedious scavenger hunt as most similar systems tend to.  It took a long road to get here, but Larian made a damn fine RPG with Original Sin II. 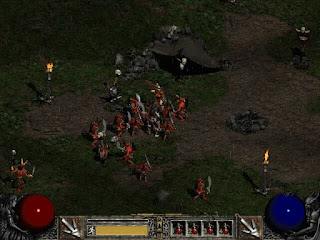 The followup to Blizzard's mega-hit Diablo, the second game in the franchise upped the ante in almost every way.  Featuring faster gameplay, a choice of five new classes (seven in the expansion) each with their own variety of skill sets and equipment choices, and of course a plethora of new quests, items, bosses and challenges to undertake.  It also featured multiplayer for up to eight simultaneous players, who could choose to tackle dungeons, gain levels or just duke it out in battles to the death.  Other new features, like "Rune words" and the ability to combine items and reroll equipment properties would also become staples of other games in the genre.  Once again, a major hit for Blizzard that continues to be fun even today.  There are even a few killer fan mods available for those tired of the stock game. 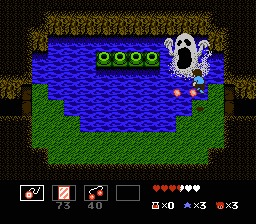 A rare example of a game never getting a Japanese release despite being created by a Japanese development team.  They were missing out, though, as Startropics is a high quality title.  Essentially an Americanized Legend of Zelda, the game features a more modern environment replete with a lot of Zelda's puzzle-oriented dungeons, giant bosses and action-driven gameplay.  Further matching the theme, your weapons included things like baseballs and yo-yos, and you were given a submarine to patrol the game's environments (navigated by a character who bears a strong resemblance to ROB), all in a quest to rescue your uncle from an alien overlord who seeks to conquer Earth and destroy the last of a race called the Argonians.  It's a bit outlandish and fiendishly difficult at times (particularly the final dungeons), but the sheer charm of it makes Startropics into a memorable experience nevertheless.
57. XCOM 2 (Firaxis Games, 2016) 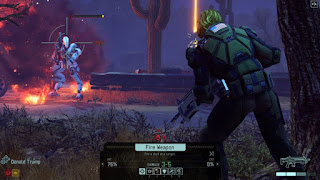 Having played several entries in the series, I can say that XCOM 2, in combination with its War of the Chosen and Shen's Last Gift DLCs, and  is easily my favorite.  While the original is a classic and Enemy Unknown was a great remake, XCOM 2 takes things in an entirely new direction.  Set in a universe after the first alien war was lost and Advent has overtaken the planet with the aim of launching a sinister, world-spanning project, means it's a much darker game, but also one where the odds - and time - are very much stacked against you.  Managing your squad abilities and time are key elements of the strategy, as are making the most of all four new classes and their abilities.  The expansions only compound this, adding in tougher boss characters known as "the Chosen", new recruits in the form of SPARK androids with their own abilities, and a number of customization options.  A game with a lot to see and do, but you can play it for months and not see it all.  And you probably will, because it's ridiculously fun. 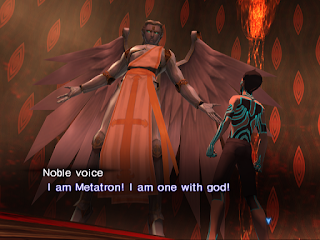 Shin Megami Tensei is a franchise known for three things - its branching story paths, allowing the player to recruit demons, and of course being brutally difficult, requiring a great amount of player commitment and many, many deaths and continues to complete.  Nocturne is no different, providing a plethora of tricky dungeon puzzles, difficult bosses and all but requiring mastery of the game's fusion system and party customization to succeed.  Still, its haunting dreamlike atmosphere, compelling storyline, interesting characters and replay value make it a game that, while it may make you curse a lot, also proves to be extremely rewarding once you batten down and commit yourself to it fully.  Nocturne is Shin Megami Tensei - and Japanese RPGs - at their finest. 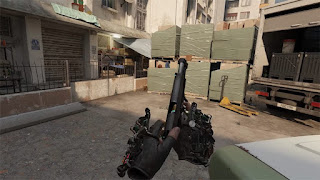 Having lived through the brief fascination with virtual reality in the '90s (as well as a few very underwhelming forays into it like the VFX1 and the Virtual Boy), I scoffed at VR's return in the 2010's as being desperate and gimmicky.  All that said, Alyx was the game that made me a believer.  It incorporates Half-Life's brilliant blend of puzzle solving, creativity and good old gunplay in fine fashion and its atmosphere is top-notch, dropping you right into the oppressive and dangerous world of City 17 armed with only a few firearms, your Gravity Gloves (not quite as powerful as the good ol' Gravity Gun, but still a lot of fun to tinker with) and your wits.  The controls are surprisingly natural,  the dialog is wildly funny, and it had me absolutely hooked throughout its entire runtime.  It still isn't the proper third entry we've been clamoring for, but it's a wonderful new addition to the Half-Life universe and well worth getting immersed in if you have the means. 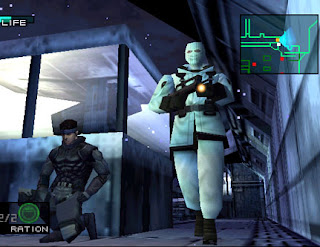 A reboot of Kojima's stealth-driven Metal Gear franchise, which took the MSX and NES markets by storm with its deep gameplay and intricate storyline for the era.  Solid was definitely a sight to behold when it first came out too, not only for its high production quality on par with a good film (even in spite of the grainy graphical capabilities of the PS1), but for the sheer scope and ambition of its storytelling.  Set in a world facing the threat of widespread nuclear proliferation, terrorism and the eponymous super-weapon Metal Gear REX, Snake's story as a reluctant hero sent to defuse one such situation lends itself to a very layered and compelling narrative.  Throughout it all, though, it also never loses sight of its roots as a video game, making sly references to such and even breaking the fourth wall on occasion.  A true classic. 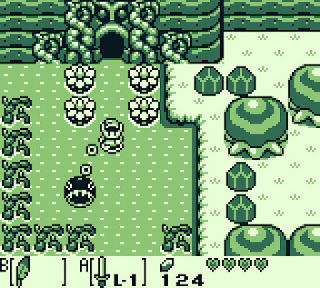 The Zelda franchise's first Game Boy outing, and what a debut it was, jumping straight to the top of Nintendo Power's popularity charts and staying there for a solid five years, only finally being upstaged by the Pokemon franchise in 1998.  There was a good reason for that too, as the game is stellar on every front.  Playing like something of a cross between the original Zelda and something of an action-platformer, the game swaps between sidescroller and overhead segments frequently throughout its dungeons, and platforming became just as much a part of the experience as defeating enemies and solving puzzles.  Of course, as per series standards, there was still plenty of that, as well as a top-notch presentation, a fun cast of characters and surprisingly good storyline that fully takes advantage of the game's surreal tone. 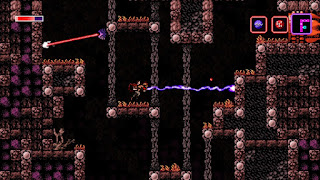 It's still a mystery to me how one guy working on his own can make an incredible 2D Metroid game, yet Nintendo, with the vast amount of money and resources at their disposal, hasn't done so in over a decade.  Well, regardless, Axiom Verge is a stellar game in the same mold, combining moody chiptune music and the same feeling of isolation in an eerie, organic alien environment as any good Metroid title.  Add in some unique powerups, a plethora of clever weapons, tons of hidden secrets and plenty of enormous boss fights, and you've got a hell of a good time. 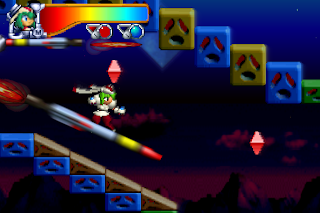 The first Treasure game I ever played, and once I did, I was hooked on the company for life. Equal parts over the top silly and awesome, the game has you playing as Marina Liteyears, a hyper-strong jet-propelled robotic maid out to rescue Professor Theo from his kidnappers, the Clancer army. The game's mechanics center on grabbing, shaking and throwing items to a variety of effects - grabbing missiles out of the air, shaking them to make them larger, and throwing them back at your enemies to name just one. Tossing enemies into one another, throwing bombs and items into a pot then shaking to "combine" them into one larger item to name a couple more. It even features some delightfully silly stages like riding a giant bee, outrunning a tidal wave on a tricycle and the ever-awesome missile surfing stage (pictured), as well as boss fights against some truly outlandish boss monsters. Hell, there's even a time trial system and a hidden gold gem in each stage that extends the ending cinematic slightly, giving it some considerable replay value as well. Another game that should be rereleased to a wider audience but still hasn't for some reason...