A mystical cyberpunk kinda-classic from the golden era of experimental PC gaming (1994), DreamWeb put the player in the shoes of an unassuming bartender named Ryan.  He embarks on a quest given to him by the nebulous "Dreamweb" to slay the 'seven evils' and save humanity, working undercover as an assassin to that end.  Its story is an interesting and ambiguous one, though the overall execution leaves much to be desired - the lackluster voiceover is forgivable to a point (as high quality VO in games wouldn't become the standard until years later), but less so are the rather simplistic puzzles, short length, an overall lack of character dialog and strange leaps of logic that move the player from scene to scene.  Reviews of the time were pretty sharply divided too, with some outlets absolutely trashing it and others giving it as high as 91%.  However, as it's long since been made into a freeware release (and is easily playable in DOSBox and ScummVM), you may as well see for yourself if it's really any good. 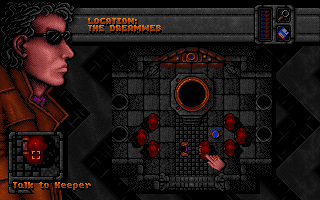