Konami had a reputation for making home ports of arcade games that managed to be just as good as the originals and, at times, even better.  Jackal was no exception, adding in boss battles, faster gameplay and tighter controls to round out a great action title. You play as a small unit of soldiers in a jeep and are out to rescue POWs, able to move and fire a machine gun (though only toward the top of the screen, so careful movement and positioning is mandatory) and lob grenades/fire bazooka rounds in eight directions - both to destroy enemies and to free POWs from prison buildings, which you can then evacuate at helipads for points.  Basically, a top-down shoot-em-up with the smooth movement and aiming of Contra; what's not to like?

An arcade smash for sure, Galaga (here given the extraneous subtitle "Demons of Death" for no particular reason) is just pure fun - blast aliens, avoid their increasingly aggressive movement and firing patterns, and shoot for a high score.  Having your ship captured and then freeing it to control two ships at once and get double the firepower was also a pretty awesome feature for the time, and the sparse-but-catchy music and spacey sound effects perfectly immerse you in the atmosphere.  The NES version is a nearly perfect copy of the arcade game with few frills, but with a game this classic, that's no bad thing in my book.

The first game in the legendary Dragon Quest franchise, which was (and still is) a huge hit in Japan.  It never got anywhere near as big in the west but it is remembered by many because of Nintendo Power, who gave away some 400,000 unsold copies of the game as a subscription incentive.  While it's not the best of the series on the platform, I do have some fondness for this one as it was the very first RPG I ever played.  It had quite a lot to offer for an early example of a console RPG, too - you actually had to talk to townspeople and follow their clues to find important places and objects, it had a surprisingly solid storyline with a high-quality translation, and despite its simple graphics and minimal animation, it looked and sounded surprisingly good too.  Like many RPGs of the era, it's a bit of a slog today because of its heavy emphasis on grinding experience and gold, but regardless, it's a game I will always have good memories of. 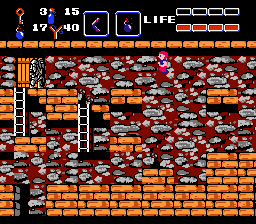 Goonies II is a strange case in many ways.  While there was a game based on the Goonies, it actually never got a home release outside of Japan, only appearing in the west on the Playchoice-10 and VS systems in the arcades.  Then, as if that wasn't odd enough, Konami decided to produce a sequel to it even though there wasn't a sequel to the movie.  It changed up the format quite a bit, taking cues from games like Metroid; you explore a very large environment, uncovering clues, finding upgrades for your character, and eventually rescuing all of the Goonies from captivity.  Even at this early stage, though, Konami definitely showed off the quality in their games with some detailed visuals, smooth animations and a quite good soundtrack (including a rendition of Cyndi Lauper's "The Goonies 'R' Good Enough").  It may not have had a corresponding film, but Goonies II was a classic game just on its own merits. 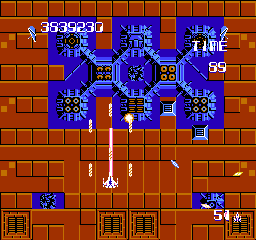 Shoot-em-ups (generally abbreviated to "shmups" nowadays) have been around since video games were first a thing, and there is no shortage of debate about which games in that vast genre are the best.  Zanac was definitely one of my favorites among those released in this era, though.  Not only did it feature surprisingly fast-paced and relentless action for its time, but it was surprisingly innovative too, containing an adaptive AI that would make things progressively tougher if you were doing well or firing too many shots, or ease up if you were struggling or consistently destroyed enemy recon craft.  It had quite a variety of weapons too - eight upgradable special weapons in total, plus an upgradable default gun, gave you plenty of options and firepower to deal with your foes.  It's not the prettiest shooter on the system by a long shot, but it plays amazingly well, so who's complaining? 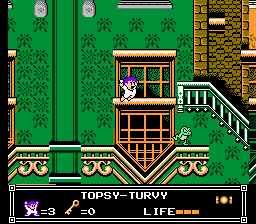 Based on the 1989 animated film (which ironically wouldn't be released in the states until two years after the game), which in turn was based on a newspaper comic strip from the early 1900s.  It doesn't follow either one particularly closely, but it does prove to be a surprisingly solid platformer with good graphics, catchy music and an overall high level of polish.  The central mechanic in most levels is key-hunting, though Nemo himself isn't particularly mobile - he moves slow and isn't that great at jumping, either.  So, you feed various monsters candy to knock them out, then take control of them to navigate the levels, with creatures like a purple lizard that can climb walls, a bee to fly and shoot stingers and a frog that can jump extremely high.  ...Weird idea, but it adds quite a bit of variety to the game, and the levels are big and fun to explore but not so vast that they become tedious to traverse.  Precise platforming and movement becomes extremely tight in the later stages, which can be frustrating, but all in all, another surprisingly good licensed game from Capcom.
101. Swords & Serpents (Interplay, 1990) 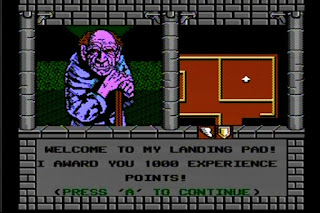 A lot of early PC dungeon crawlers got NES ports, though their execution was often not the greatest; whether due to bugs (Might and Magic), a substantially downgraded presentation (Bard's Tale) or just dragging pacing in general.  Swords & Serpents is one not based on an existing computer game, but rather an entirely original offering, and they did a good job taking advantage of the NES's capabilities rather than working against them.  The unsettling atmospheric music and grotesque monster graphics definitely aided with that, as did an uncomplicated UI and even an onscreen minimap to aid in navigation.  Also unique among dungeon crawlers on the platform, this one is multiplayer, supporting up to four players via the NES Satellite or Four Score.  It is a bit of a pain to save your game and come back later (there are FIVE passwords to keep track of - one tracking your progress through the dungeon and one for each of your four characters), but Swords and Serpents is nonetheless a fun time for RPG dorks.
100. Solomon's Key (Tecmo, 1987) 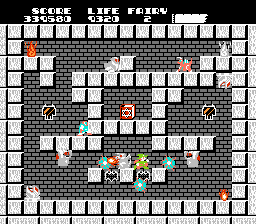 A surprisingly faithful port of the arcade title of the same name, Solomon's Key is one of the better-remembered early NES games for good reason.  Basically a mashup of action, platforming and puzzle game, your goal was simple enough at a glance - get the key and get to the door before time ran out.  Of course, like any good puzzle game, it quickly proved to have a lot of hidden challenges and secrets to uncover.  Figuring out how to evade enemies, searching the boards for hidden items, and using your limited supply of fireballs to strategically defeat enemies and advance all became key strategic elements.  The game also featured three different endings depending on how many hidden goals you completed - if you wanted the best one, you had to free the fairy princess and collect both missing pages of Solomon's Key on your way to the final stage.
99. Micro Machines (Codemasters, 1991) 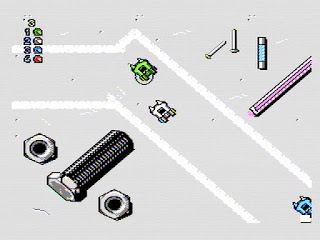 Codemasters was definitely one of the most prominent unlicensed NES developers, with their distinctive gold and silver cartridges with the switches on the back, games frequently being sold on TV shopping networks and Nintendo trying (and repeatedly failing) to sue them into oblivion.  Micro Machines was probably their most popular NES game; based on the toy line known for the fast-talking commercials with the Micro Machine Man (played by the always awesome John Moschitta Jr.), it was a top-down racer with a pretty clever gimmick in that you were a tiny car driving through tracks constructed in everyday places like a garage, a garden, a kitchen table or even a pool table.  You got quite a variety of vehicles too, from Warrior cars with spiked fronts that could crush your opponent to boats to sports cars to helicopters to tanks (with fireable turrets, no less).  A highly-regarded NES racer that spawned several sequels, with the Sega Genesis versions even having controller ports built right into the cartridge to eliminate the need for a four-player adapter.  Fun stuff!
98. Felix the Cat (Hudson Soft, 1992)

A game loosely based on the iconic cartoon character and likely made to cash in on the film released a few years prior (though the game has no connection to the movie's plot).  Felix stood out for its high-quality presentation, with some fluid animation and amazing music for the NES, and for being a fun platformer with some creative design.  Collecting Felix icons allows Felix to transform his magic bag into new armaments, changing up his attacks - you start with a basic punching glove, upgrade to a magic wand that spreads stars in all directions, upgrade again to a car with a long-ranged horn, and finally to a tank on land, with sky and underwater stages having their own sequence of transformations.  While not a very difficult game overall - it's very generous with powerups and extra lives - it's a great, very charming platformer with a lot of charm, and it's a shame it never really got that much attention owing to its late release.
97. Princess Tomato in the Salad Kingdom (Hudson Soft, 1991) 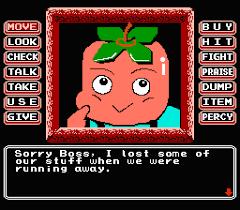 Adventure games were a fairly uncommon sight on consoles, but the NES actually had a fair number of them - Maniac Mansion, the ICOM games, and even a port of King's Quest V (published by Konami, no less) being some of the more famous examples.  Princess Tomato was similarly a port of a computer game, but its only western release was on the NES, with redone graphics and music added from its computer counterparts.  Set in a kingdom of living fruits and vegetables that's come under siege by the evil Farmies, it's definitely a unique and charming setting.  As you can see, it has a rather large HUD too, with a total of fourteen commands to interact with your surroundings.  Throughout the game you're accompanied by Percy the Persimmon, who occasionally gives you clues (and humorously loses all unnecessary items at the end of each chapter to de-clutter your inventory).  It's a pretty easy game overall, as there's no real game overs save for losing a game of "Finger Wars" (rock-paper-scissors) to the final boss, though you can only save your progress at the end of each chapter via a password system.  A quirky and quite amusing little game, though it unfortunately didn't sell very well and commands quite high prices nowadays.
Previous - Next