Phantasy Star Online's time in the limelight was relatively short-lived for an MMO, but that didn't stop it from getting a sizable number of spinoff games across various platforms - from CARD Revolution on the Gamecube to more direct gameplay successors on the Xbox 360, PS2, PSP and Nintendo DS, the online Phantasy Star games marched on throughout the 2000s.  The first to carry on the name was PSO2, though, which launched in Japan in 2012 but didn't get an (official) worldwide release until eight years later.  Twenty years of improvement have definitely made their mark, though, as PSO2 is a vastly different experience from most of its predecessors.  Rather than being relatively slow-paced and methodical, PSO2 is very much steeped in action elements, letting the player chain together combos, evade attacks with quick dodges, and quick-swap between up two six weapons and skill palettes at the touch of a button to change up their strategies on the fly.  Aside from customizing and powering up your character, there are also a staggering number of missions and optional quests to complete, with more frequently being awarded mid-mission in the field to allow you to garner extra rewards.  Hell, there's even a casino where you can play various minigames to earn prizes and daily login bonuses to keep you coming back for more, so there's a lot to see and do.  And the fact that this is all free to play, with monetization mostly relegated to customization options, is quite a nice bonus too. 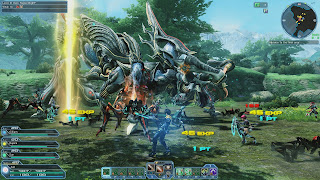 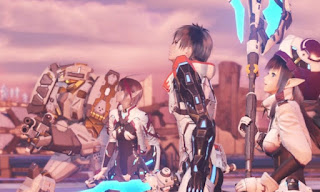