A difficult but well-crafted game that draws inspiration from NES classics like Super Mario Bros. 2 and Metroid, containing detailed 8-bit visuals and a strong chiptune soundtrack.  Metroid for its open-ended, nonlinear world to explore and Mario 2 in its mechanics - most notably Lyle's ability to pick up and throw blocks to defeat enemies and create makeshift platforms and bridges.  One must quickly master the finer points of the physics to succeed - you throw further while running, can do a short throw while crouching, and blocks will bounce when they hit something, which can potentially damage your or an enemy.  Checkpoints are also spaced a good distance apart, meaning you'll have to retread a good part of the map if you die, so careful progress will serve you better than trying to rush. 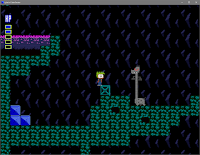 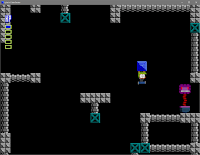