Pushing the limits of 1986 technology!

* You can mine Chromium, Promethium and Tungsten here.  All are relatively valuable minerals, and there are no dangerous life/planetary conditions to contend with on this planet.

Tips (will add more as we go)
Terms
Colonizable Planet Criteria
Colonizable planets are worth anywhere from 30,000 to 50,000 Mu, depending on how desirable they are.

While I was doing some resource-gathering off camera, I came across this note on Planet 3 of the Arth system: 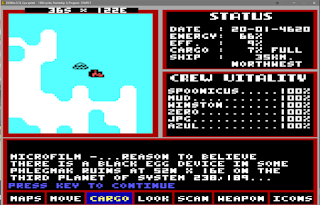 It'll be a while before we venture out that far, but make a note of it for later.

(I don't believe this note appears until you get a notice at Starbase on 10-01-4620 about ruins on the third planet of the Arth system.  It's appears in a random ruin after that date.)