Mass Effect in a Nutshell

I wanted to enjoy Mass Effect.  I honestly did.  I gave it chance after chance to grasp its potential and become amazing, but it all came to nothing; at the end of the day, it's just another dime a dozen third person shooter with bland, underdeveloped characters, a dull-as-dirt presentation and a predictable plot line plagiarized from other, better works, all being clung to by a bunch of nostalgia worshippers who think that making one good game a decade ago means you can do no wrong ever again...

The game begins with a character customization scene.  A strangely intricate one, too, but not for the reasons you think.  Yes, you pick your class and background here, but that all takes a backseat to the incredibly detailed facial construction feature.  And therein lies this game's first major problem; when your developers put this much thought into detailing every single insignificant feature of your avatar's face in a game genre where the camera is oriented behind your character's head roughly 75% of the time, and it gets that much more attention than the alleged Role Playing Game element (which boils down to all of two menu choices), it doesn't really speak well to the design team's priorities.

As for your character's back story (ha ha), you get one of three choices.  That's it.  You literally just pick it from a menu and then go with it, and the only effect it has on anything is the occasional throwaway line of dialog.  You know how this could have been handled better?  Have something like a practical version of the GOAT from Fallout 3, where your actions during the mission become famous throughout the galaxy and your subsequent reactions to them determine how others look at you throughout the game.  Or if that's too much work, just have a linear opening mission that shows how Shepherd became what he is today and have his subsequent reaction to it be entirely up to the player, Deus Ex HR style.  Either one of those would be more effective in helping the player get invested in the narrative, and it would also avoid breaking the cardinal rule of show, don't tell.
Spoony: Hell, even Bioware themselves got this in games like Baldur's Gate 2, where you start off as more or less a blank slate (despite being roped into D&D's good/evil/lawful/chaotic chart by necessity) and your actions would determine how later events changed.  If you had a bad reputation when the Harper fanatics start trying to hunt you down, it would cause Jaheria to leave the party, unwilling to defend you despite her misgivings about their crusade; she clearly cared enough about you to (canonically) accompany you throughout the entire first game, even if you were playing a bastard for most of it, so seeing her choose not to stand by you when a particularly fanatical member of her order comes for your head is a completely valid, in-character moment.  Or in another example, if you killed or duped Drizzt in the first game to steal his badass weapons, he'd come back again in 2, friends in tow, to get his revenge against you, with no option to talk him down.  Or hell, one of my favorites - if you choose to ally with Sarevok (the first game's genocidal main antagonist) in Throne of Bhaal and show him genuine compassion and forgiveness, you could actually convince him to change his ways.  Not only would his alignment shift from Chaotic Evil to Chaotic Good, but his trademark bloodthirst, arrogance and anger would be greatly downplayed for the rest of the game.  Your actions and words were a palpable part of the game and had actual consequences later on, whereas in Mass Effect this is almost never the case - nearly everything you do exists in a vacuum and only really changes a line or two of dialog later rather than having any real effect on the gameplay or story.
Anyway, after spending roughly 3 seconds developing my character's origins and 38 minutes hitting the "randomize features" button to make him look as freakish as possible: 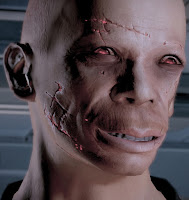 Spoony: You can window-dress it all you want, but it's blatantly clear to me that this is just a sleazy way to earn a few more sales by shoehorning some cheap T&A and superficial political pandering into the game.  This is especially evident because none of the game's characters have the slightest bit of depth beyond their sexuality, and completely ignores the fact that there's plenty of porn to be found on the internet for free.  But oh, that's right, doing that will cause you to miss out on scoring that achievement on your gamer profile and proving you're a manly man to all of your twelve-year-old buddies on Xbox Live.  Blech.   Not to mention that, as I've also stated many times, buying video games to further your political views - especially leftist ones - is ineffective and stupid, because the overwhelming majority of your money is going right into the pockets of the rich conservatives who run the multi-billion dollar corporations Electronic Arts, Microsoft and Sony.  I'm pretty sure Pepsico's board of directors gets a cut too for all those junk food products you bought to get discounts on DLC and merchandise, to say nothing of the companies that produced said merchandise, the owner of the factory that stamped out the disc you bought, the owner of the other factory that created the case said disc came in, the printing company that printed the case insert and manual, and the company that shipped copies of the game to the tax-dodging, minimum-wage-paying big box retail chain you bought it from.  So for every "vote" you and yours have cast for equality by buying a big budget video game, its corporate stakeholders have probably bought at least three actual votes by financing the campaigns of an opposing conservative politician using the salaries you paid them.  They, in turn, have gone in to pass massive tax breaks for themselves and their corporate backers without raising their employees' salaries a dime, kept minimum wages well below the poverty line, busted up unions, implemented 100+ hour working weeks, disenfranchised millions of voters and passed law after law taking away the dignity and freedoms of those you claim to support, all while feeding you a convenient narrative to let you pretend you're a fearless champion for the oppressed when the sad truth is that you're just an easy mark. Way to stick it to the man, progressives!  Not that the overwhelming majority of the chuds who instantly stoop to vicious character assassination to defend a fucking video game actually care about any of the people their beloved gods billionaires exploit to profit off of; hell, they don't even give a shit about the games themselves most of the time, just skipping through all the cutscenes that 90% of the development time went into and GameFAQsing through what little gameplay there is in a weekend so they can get another platinum trophy for their profile and then sell it back to Gamestop before the trade value drops. Which just results in more mediocre games made by slave-wage workers that are padded out with junk missions and character interactions more stiff than an elementary school play, topped with superficial political pandering so these ghouls can pretend to be superheroes to impress their Facebook followers while they never do a damn thing that doesn't benefit only themselves and the billionaires they literally worship. Self-feeding malignant narcissism at its fucking worst.

...Yeah.
And before I get e-mails about it: yes, I did give Mass Effect 2 a try at the behest of a few series fans, and while it is a better game than the first, it still falls well short of being what I would consider a good game.  The game's pacing certainly benefits from its streamlined design and combat is significantly more involving and strategic, but nearly all of the major gripes I had with ME1 are still there.   The characters and environments are still stock at best and uninspired at worst, the writing is still derivative and dry (particularly the corny Gollum-voiced evil lizard stock villains, which caused me to break down into a fit of laughter the first time I heard them), and it's still abundantly clear that none of the actors are the slightest bit invested in the project beyond the promise of an easy paycheck.  Certainly not worthy of being listed as one of the twenty greatest games of all time on Game Rankings, let alone any top twenty I can think of.  Well, except maybe the Top Twenty Games With the Most Undeserved, Overblown and Mindlessly Positive Press Coverage That EA Purchased in 2010.