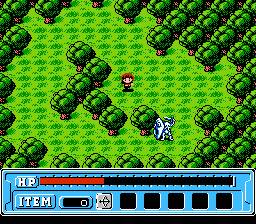 Game Arts is a beloved company to many old-school gamers, responsible for the Lunar and Grandia franchises, as well as for some other cult favorites like Silpheed on the Sega CD and Alisia Dragoon on the Sega Genesis.  One of their earlier outings on home consoles, however, was not so well received.  Faria has all the makings of a good 8-bit RPG - well-detailed visuals, charming characters and a creative fantasy world - but the gameplay unfortunately does not stack up.  Combat in the game, rather than a turn-based format, is done in real-time, with you trying to defeat enemies in an overhead battlefield before they deplete your HP.  Unfortunately, some spotty hit detection makes it difficult to take hits without being hit yourself, and you die very easily, especially early on, when you can go straight from an encounter with some weak bug enemies to getting your face punched in by a hulking red monster many times your current level.  Running from combat only docks you further, causing you to lose experience, gold, or even equipment you've picked up (which really sucks when you drop a piece of gear you just spent hours grinding for).  Pair that with uninteresting dungeon designs and a extraordinarily high encounter rate, and you have a game that just isn't fun to play.  You'd expect a lot better from the studio that brought us the legendary Lunar games just a few years later, but Faria is an RPG that sadly ranks among the system's worst. 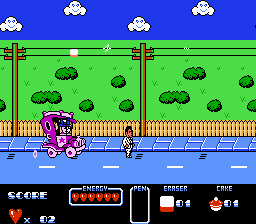 A lousy, underperforming Ralph Bakshi movie mangled by the studio into something unrecognizable from the original pitch, and of course, Ocean - makers of too many crappy film tie-ins to count - was there to make a game out of it before its five minutes of fame were up.  It does at least have a pretty creative gameplay element - you can suck up doodles (cartoon characters, basically) using a pen to eliminate them, but once you fill up the pen, you have to find an empty inkwell to empty it before you can use it again.  Sadly, that's about the best thing that can be said of it - the asinine, unintuitive puzzles, glitchy hit detection and lack of invincibility after a hit (meaning any hazard can and will drain a huge chunk of your health on contact) make it a pretty obnoxious game to endure, to say nothing of the garish visuals and grating music.  At least it followed in the footsteps of its tie-in film and was forgotten pretty quickly after it launched. 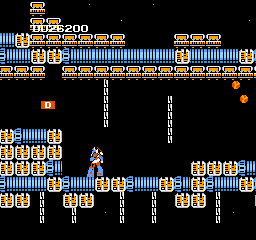 Transformers, as massively popular and prevalent a media franchise as it is, surprisingly has very few worthwhile video games to its name.  Probably the most notorious of all of these (though not the worst, as we'll see later on this list) is Convoy no Nazo - an early Famicom platformer that tried to cash in and ended up being a pretty wretched experience.  The game is ridiculously tough, with one-hit kills, cheap enemy patterns and your character having both a huge hitbox and tiny projectiles that never seem to hit anything you want them to.  The stage design only compounds this, frequently forcing you to jump blind across gaps - usually straight into an enemy bullet - and funneling you into narrow tunnels where you can't avoid any hazards that come your way.  There's even a much more annoying version of Super Mario Bros' looping castles in Stage 9 and it forces you to track down seven letters hidden in obscure "secrets" in each stage and play through it all AGAIN to get the true ending (which, trust me, is not even remotely worth it).  There are a lot of great platformers on the NES, but this is definitely not one of them.
77. T&C 2: Thrilla's Surfari (Sculptured Software, 1992)

I don't know who was clamoring for a sequel to T&C Surf Designs of all games, but apparently enough people were that Acclaim saw fit to commission another one.  This time, development duties were handed off to Sculptured Software (a house that brought us such classics as Metal Mech, Day Dreamin' Davey and Captain Novolin) and the game's focus was shifted into more of a sidescrolling action title.  Unfortunately, this genre shift did not make it any less of a frustrating experience.  There are still tons of obstacles to deal with every step of the way, and even the slightest tap against one will send you careening out of control into a death animation and all the way back to the beginning of the level.  Oh, and you only get three lives and no continues to complete the entire adventure, so good luck.  Even some nicely detailed visuals couldn't save this one from being not only bad, but worse than its already appalling predecessor... 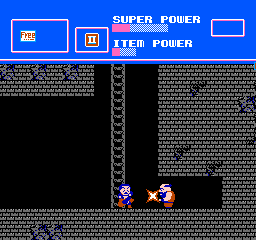 While Superman is a pop culture icon and probably the single most iconic comic book hero of all time, his adventures in the realm of gaming have unfortunately been mediocre at best and disastrous at worst.  But while the NES Superman game certainly isn't the worst he's done, it was still crummy in every facet, with lazy combat (get close and mash the punch button!), a confusing map layout and having to collect icons to use any of Superman's  powers.  Hell, you can't even fly around on your own; you need to find a power-up icon, and even then you can only take off and land at specified spots in the overworld.  The missions in the game are also just dull, consisting almost entirely of going from place to place and punching a building full of generic enemies into submission over and over again.  I suppose the open world aspect of its design was pretty innovative for 1988, but when everything else about the game is so unappealing, it really doesn't amount to much.

Fun fact: The Famicom version of the game is ever-so-slightly better, if only because it actually contains the iconic John Williams Superman theme (omitted from the US release due to copyright issues, only to be replaced with music from the Famicom RPG "Light of the Indras"). 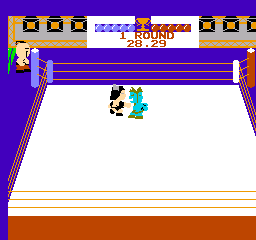 Just another bad wrestling game for the NES, only noteworthy for the fact that it was among the earliest examples of one.  M.U.S.C.L.E. was based on the Kinnikuman franchise in Japan, which spun off into a line of tiny plastic figures in North America.  That's clearly reflected in the game's sprites, which are tiny, featureless little men with minimal and stiff animation.  Move variety is virtually nonexistant, and the only thing that stops every match from being a mindless slap-fight is the occasional power-up ball that grants whoever grabs it the ability to unleash a more powerful attack that quickly whittles down the opponent's health bar.  In short, the whole game just boils down to stalling for time until you can grab said orb and effortlessly curb-stomp your opponent in a matter of seconds.  No skill, no strategy, none of the athleticism or spectacle of professional wrestling.  M.U.S.C.L.E. is a bomb. 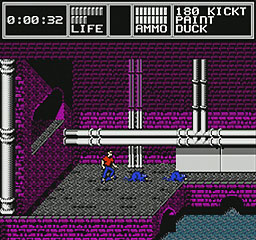 Like Thrilla's Surfari elsewhere on this list, Skate or Die represents a sports title taking an ill-advised leap into the action-adventure genre.  In this case, it has your character venturing through stages (some maze-like in layout... ugh) collecting items, fighting bosses and buying occasional power-ups for your board.  It's not as fun as it sounds, largely due to clunky controls and unappealing level layouts that get repetitive very quickly.  The first Skate or Die title was no masterpiece, but at least provided a bit of fun with its numerous events and pick-up-and-play oriented style.  This lousy campaign mode is just a waste.

At the very least, there is a silver lining here: The game retains a half-pipe event, serving as a minigame where you try to collect as many points as possible within a time limit by doing tricks. While not incredible, it's certainly much more enjoyable than the lame story mode... 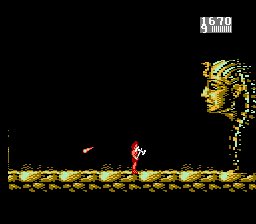 One of many NES games published by Mindscape, a company with a penchant for porting existing games and rebranding them to try and turn a profit from unsuspecting fans.  Mad Max was a rebranded version of Road Raider, Last Starfighter was a repackaged Uridium, and Conan is in reality a lackluster port of a well-regarded title called "Myth: History in the Making."  So if you were staring at that screenshot this whole time and wondering what ancient Egypt had to do with Conan the Barbarian, now you know: Absolutely nothing.

I wouldn't even mind the blatant recycling if Conan were remotely enjoyable, but that is definitely not the case here.  Undetailed visuals with heavy pixelation (ported straight from the C64 version of Myth with no improvements), lousy hit detection, the worst kind of guesswork puzzles and some truly poor decisions in the control department (pressing down on the D-pad to jump and A+Down to duck?  Really guys?) make it an unpleasant experience on every front.  Utterly shameful. 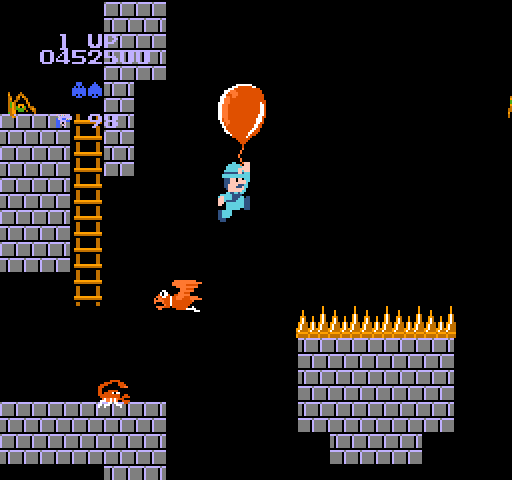 There's no kinder way to put it: Super Pitfall is the death of a classic franchise.  Pitfall was a hit on the Atari and its sequel was quite possibly the most impressive title on the platform, but when it came time to create an NES sequel, the ball was dropped hard.  Now the game is all about obtuse item-hunting whilst dealing with  some truly lousy level design that seems to deliberately be designed to be as frustrating as possible - screens full of nothing but pits, difficult jumps and instant kill hazards around every corner.  Not to mention a plethora of graphical glitches and bad hit detection making the game even less of a pleasant experience.  Cap that off with ugly graphics, choppy animation and being haunted by one constantly looping music for 90% of the game's running time, and Super Pitfall amounts more to torture than a gaming experience.  The fact that a game with such a golden legacy could end up being this crummy only makes it all the more depressing.

Fun Fact: Atlantis no Nazo (a Sunsoft-produced adventure infamous for its extreme difficulty and awkward controls) was planned to be localized under the title "Super Pitfall II."  However, that plan fell through because this game was so poorly received.
71. Predator (Pack-in Video, 1989)

Yes, this section of the list is really laying it on thick with the licensed titles, but can you blame me when so many of the NES' bad licensed titles make LJN's game library look positively magnificent by comparison?  At a glance Predator is just another lousy platformer game with a license pasted on, but the sheer asininity of its design earns it a badge of notoriety.  In addition to slippery physics and being able to fall through the sides of platforms (never good things in a game with lots of precision platforming), the game seemingly goes out of its way to frustrate the player into submission.  Weapon icons are seemingly always placed in the most inconvenient spots possible (placing fist weapons right before a hallway full of enemies being a commmon sight) and some levels are devoted entirely to blasting your way through bricks, one by one, with well-placed grenades.  So in addition to having to precisely place the things so you don't make the level unwinnable, you often have to get them awkwardly wedged in walls just to make sure they blow up the right brick and allow you to proceed.  Did I mention you can never blow up more than one brick at a time too?  ...Yeah.  Some solid music can't save this turkey from being a frustrating ordeal.