Originally released on the shareware model as "Halloween Harry", though they changed the name at 3D Realms' suggestion that it would be seen as a seasonal game and would sell poorly the rest of the year.  It's a relatively novel take on run-and-gun platforming, arming you with a flamethrower as your default weapon (which earns it points in my book) and, rather than a standard jump, you get a jetpack that runs off the same fuel supply.  You can also purchase limited-quantity special weapons from vending machines in each stage, and your goal is to rescue citizens, open paths via switches and make your way to the end of each level.  A fun and creative little game from an era when PC platformers were still a fairly rare sight. 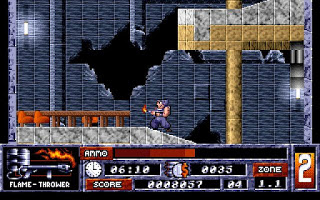