I did some farming off camera to give myself a bit of an edge, getting a fire resistant Magic Shield for the protagonist and my Slime Knight and upgrading equipment for the rest.  I didn't get a Healslime or Flamethrower ally as I'd hoped, but I did get this guy: 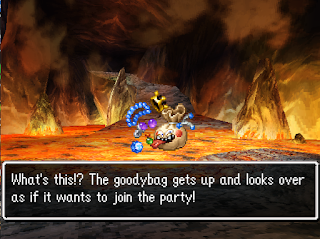 Yep, one of those annoying monsters that spam debuffs and status effects.  But they get shockingly high stats and are completely immune to fire breath attacks, so that's one less character to worry about in the fight.  If they sneak in a debuff or two while they're at it, all the better!  Goodybag does have two major downsides, though - his Wisdom is fixed at 5 (so I can't control him) and his max level is a paltry 7, so he won't stay useful for long.  Still, it should get me through this fight at least.