Fighting games were the hot new genre in the '90s, with Street Fighter II taking the world by storm and countless copycats trying to get a slice of the pie for themselves; some quite successful (King of Fighters, Mortal Kombat) and many others... well, not.  One Must Fall 2097 is a definite standout for the PC platform, with smooth gameplay, an energetic anime-like presentation and even a bunch of hidden secrets from hidden opponents to secret parts that let you soup up your mech.  In addition to ten playable mechs, you also get to pick from a variety of pilots that tweak their parameters, adding quite a bit of variety to the gameplay.  It even has Mortal Kombat style finishing moves to earn bonus points.  Fun stuff, and since it was released as freeware in 1999, it's worth a look for genre fans. 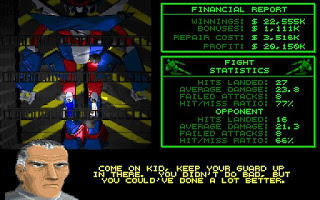