The Genesis debuted in 1989 and got off to a pretty strong start, but it began to struggle once the technologically-superior Super Nintendo entered the 16-bit market with a barrage of high-quality titles.  Attempting to give themselves an edge over their new competitor, Sega developed and released a CD-based addon, hoping the allure of full motion video and CD-quality audio would entice fans to give the Genesis another look.  Unfortunately, most of the games they were promoting were simply not very good and severely lacking in the gameplay department, or just barely-improved Genesis games that tacked on a few cutscenes and new music tracks and called it a day. Even it's much-touted full motion video capabilities were lackluster (with 64 colors, choppy framerates, being boxed into a tiny portion of the screen and a lot of ugly compression), so the Sega CD proved to be unpopular and didn't sell very well.  That didn't mean it didn't have good games, though; as with the Saturn and Dreamcast they were there, just denied their due by a lack of promotion on Sega's part.  So, let's take a look at ten of my favorites.

The early '90s saw optical drives become the hot new thing for consumer electronics; CDs having far higher data capacity than a floppy disk and being very cheap to produce made them quite appealing to game developers too, who quickly made all manner of flashy, multimedia-laden games to show off their capabilities.  The 7th Guest and Myst are two famous examples of early CD games that sold very well, and Sega, eager to show off what the Sega CD could do, quickly produced one of their own in Mansion of Hidden Souls.  It never got anywhere near the same level of attention, but it holds its own despite the relatively limited capabilities of the platform.  Lured to a mansion by a mysterious sorcerer called "the Hunter", you must find your sister and escape before you're both turned into blue butterflies and trapped in the mansion forever.  It manages to be pretty immersive, too - the eerie ambience, the surreal scenario (complete with other trapped souls taunting you and making strange remarks throughout) and the minimal HUD all build up tension surprisingly well.  Gameplay-wise it's a pretty simple item-hunting adventure game and the overall short length is a bit disappointing, but if you're fascinated by old FMV/multimedia games like I am, this is one that's worth checking out.
9. Final Fight CD (Sega CD) (Sega, 1993) 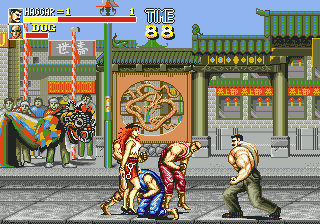 The SNES port of Final Fight suffered from many technical issues, being limited to one player gameplay, missing a stage and having only two of the playable characters from the arcade game.  As with Strider, Sega saw an opportunity to capitalize and licensed the game to produce their own version on the Sega CD, delivering an experience that was much more faithful to the original.  Of course, being on the Sega CD, it also featured a retooled soundtrack and some bits of voice acting in the intro and ending, both of which are pretty forgettable.  But the gameplay is what matters most, and Final Fight CD was as close to the authentic arcade experience as you could get at the time. 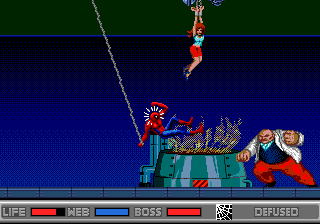 While the Genesis version of Spider-Man was a decent (if overly difficult) game, most people remember Spider-Man's foray on the Genesis as an oddly-shoehorned boss in Revenge of Shinobi alongside numerous other licensed characters, most of which were altered in later versions of the cart.  But not too many people remember the enhanced Sega CD version of Spider-Man VS the Kingpin, and it's a shame as it's a vast improvement over its Genesis counterpart.  Not only did it feature surprisingly good cutscenes, music and voice acting (for the time, at least), but the gameplay was vastly streamlined by no longer having to find money and having a generally faster pace.  The game also provided more nonlinearity by allowing the player to visit stages in almost any order and even two new levels.  Spidey has had quite a few games over the years that have varied pretty heavily in quality, but this is definitely among the better ones. 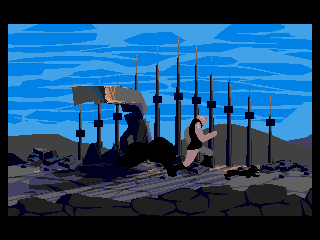 Out of this World was an example of a game that was ported to both the SNES and Genesis platforms, with each having their own pluses and minuses; as was generally expected, the Genesis featured smoother gameplay and animations and less loading screens while the SNES version had more graphic detail and stronger audio.  The definitive release, however, came out on the Sega CD as one half of the "Heart of the Alien" compilation.  This contained not only the original game, but an Interplay-produced sequel where you play as the alien from the original game and set out on an entirely new adventure, with the alien having a distinct gameplay mechanic in the form of a "Laser Whip" that allows swinging between platforms.  It doesn't feel quite as well constructed as the original, but the same trial-and-error gameplay and appealing vectorized graphic style is there, complete with some surprisingly grisly death scenes for the time.  It also once again manages to tell a good story without a single word of dialog, which is something you almost never see in modern games...
6. Lunar: The Silver Star (Game Arts/Studio Alex, 1993) 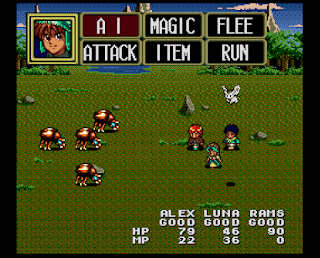 Japanese RPGs were still a relatively niche genre in the early '90s, but Lunar was arguably one of the first to help the genre gain some mainstream popularity.  This was in no small part due to its presentation, utilizing video snippets and voiceover to bring its cast of characters to life and give it a presentation on par with an animated movie; something it did remarkably well despite having a considerably smaller budget and the limitations of the platform.  Working Designs also put a considerable amount of effort into localizing the game, adding quite a bit of humor to its dialog (including numerous pop culture references) and even making some (relatively minor) gameplay changes to add more challenge.  The end result, while controversial among purists, was nevertheless a very memorable RPG for its time, and one of the standout titles for the Sega CD. 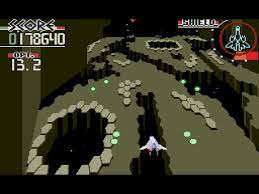 Silpheed was a pretty popular title in the early days of computer gaming, touting smooth animation, high-quality music and surprisingly fast-paced gameplay when it debuted in 1986.  Game Arts decided to remake it for the Sega CD in 1993, now with CD-quality audio, recorded voiceover and "amazingly detailed polygon graphics" (mostly in the form of FMV playing behind the action).  It plays very similarly to the first game despite the technological leap, but that's by no means a bad thing - it moves fast, plays well and looks and sounds great, managing to avoid a lot of the ugly compression and interlacing that plagued so many other FMV-driven games on the platform.  It may not be the most technically impressive Sega CD title ever, but it's fun, and really, that's why you should be playing games anyway. 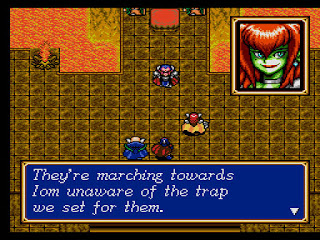 Speaking of tactical RPGs, the Shining Force series also made an appearance on the Sega CD.  Chronologically it takes place between the first and second Genesis games and design-wise is more or less a remake of the two Game Gear titles (one of which was never officially localized), though with some new content added.  In terms of gameplay it's not terribly different than its predecessors, but that's no bad thing as it still plays great - command a wide variety of characters (from archers to mages to knights some wilder ones like centaurs, birdmen and flying squids) and battle your way through large maps full of enemies.  All with colorful backdrops and a charming anime style presentation.  Good stuff. 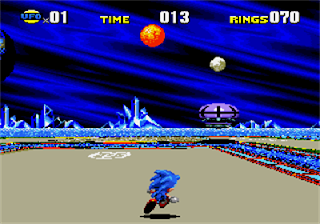 I know I've sung the praises of almost every Sonic game from the 16-bit era, but it really was a standout franchise for its time; smooth animations, fast-paced gameplay, crazy and imaginative stages and some of the best music in all of gaming even today. But of all the classic Sonic games, Sonic CD might just be the best.  It combines all the strongest elements of both the first and later Sonic games into one solid package with its complex stages (each with four different layouts representing the past, present and a "good" and "bad" future), puzzle-solving elements and numerous routes, and its presentation is fantastic thanks to some colorful visuals, fluid animations and a soundtrack that manages to be very mellow and mesmerizing (and yes, I prefer the reworked US soundtrack to the peppier Japanese one). It brought so many innovations to the formula while losing none of the fun. The series may be a target of ridicule these days, but classic 16-bit Sonic will always be one of the greats in my book. 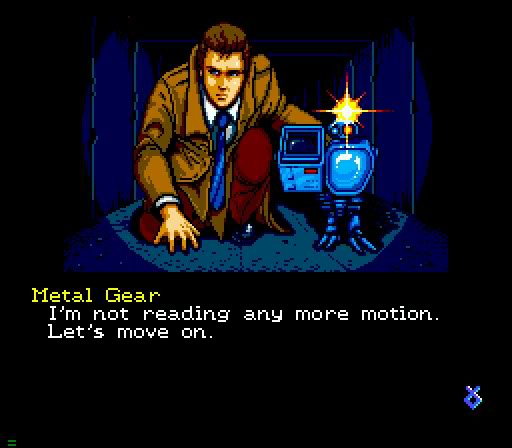 One of many acclaimed games from legendary developer Hideo Kojima, Snatcher was a memorable take on the graphic adventure genre. The plot was something akin to Terminator meets Blade Runner, complete with all the gory deaths and intense shootout scenes that descriptor implies. Stack that up with strong visuals (including some clever technical tricks to display 128 colors onscreen at a time - double the number the Sega CD was normally capable of), an excellent soundtrack and the Kojima standard of a large cast of surprisingly complex and well-written characters, Snatcher was definitely something to behold. Even the voice acting was surprisingly good for the time and holds up quite well today. Well alright, you can tell they're not professional actors, but at least they're trying to make it sound good. The real tease here, though, is that it ends on a cliffhanger for a sequel, which they still hadn't delivered on twenty years later (and given the current state of Konami, probably never will)... 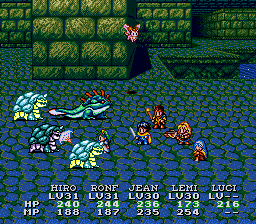 The sequel to Game Arts'  Lunar: The Silver Star, and it's a logical step forward in almost every respect.  It still sports the same unique combat system, but the dialog and cutscenes have been expanded to an unprecedented 50+ minutes apiece, and were remarkably well produced and acted for the era (albeit with some of Working Designs, erm, "colorful" accents added). Working Designs also implemented some changes to the original release, toning down the difficulty for some extremely difficult battles and implementing a unique save system that required a certain number of points to be earned (as they saw little challenge in letting the player save at any time).  It later received wider recognition and some substantially refined gameplay and presentation on the Playstation, but the original Sega CD release is still a standout title for the platform, as well as one of the games that helped to revolutionize the way stories were told in games.