Released on the Windows 95 installation CDs as a demonstration of just what the operating system was capable of, Hover has a simple premise - drive a hovercraft around an arena and capture all of the enemy drones' flags before they do the same to your own.  Flags are placed randomly and drones, while not especially smart, do get increasingly aggressive and numerous as levels go on.  In addition, each of the three stages is laden with traps - panels that will cause the player to get stuck, launch in a specified direction, lose speed or even lose flags if they touch them, to name a few.  To aid with both these obstacles, one is also given three types of powerups - a jump spring, a wall that can impede enemy drones, and a shield that will temporarily protect the player from traps.  It's a simple little game, but surprisingly fun if you have a few minutes to kill. 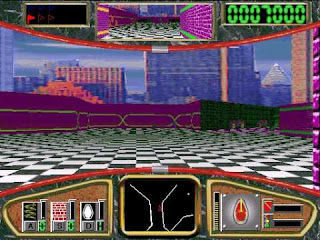 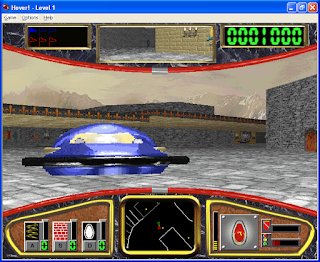 A 3D remake was also available as an in-browser game on Microsoft's site and downloadable via its app store for a time, offering multiplayer support and three types of hovercars to play as with varying stats, but as of April 2019 this version is no longer available save on the Internet Archive.