I caught the Baron Garayan, too.

Information on exactly how it's done is inconsistent across the internet (and seemingly in the game too), but what got it for me was:
Watch Dark Cloud 2: Caught the Baron Garayan from spoonshiro on www.twitch.tv

I also made judicious use of the fish duplication bug (courtesy of the always awesome Pokemonfan4000) and got myself an uberfish, which I used to win the Master Class in the Finny Frenzy.

Unfortunately it seems you can only win one prize per Finny Frenzy.  There also seems to be a hard upper limit on how many points you have on any single fish (about 400).  Once you go above that threshold, the game freezes. 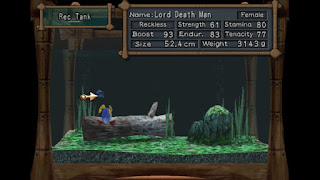