Also known as "Untitled Fighter 'BB'", this is a bizarre, corrupted and very unfinished artifact that I found one day while perusing MAME roms, and in all the years since, I've never forgotten it.  The name 'BB' apparently comes from a stamp on the ROM board the game was found on, since there's no identifiable title in the game and very little legible text.  It's also not really playable - no button inputs seem to actually work yet, and there don't seem to be any hitboxes (let alone attacks) programmed.
Watch Unknown Fighting Game 'BB' from spoonshiro on www.twitch.tv
This game was an enigma for a long time, but some investigation has revealed that it's most likely a very early prototype of an obscure Konami fighting game, Martial Champion.  This is most readily evident with the first character one sees, with some unused graphics in the ROM revealing his name is "Avu".  A character featured in Martial Champion has the same name and a similar appearance: 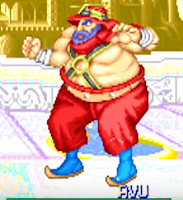 The other two (non-corrupted) characters are a bit tougher to pin down, but the blonde guy bears a resemblance to Jin:

And the strange mohawked woman more than likely became the character called "Bobby".

So there you have it.  I think it's a pretty safe bet that this is just a odd, barely-functional prototype that somehow found its way into the hands of a private collector and was dumped to the internet for everyone to puzzle over.  But regardless, it left an impression on me.