A trilogy that made its rounds on the shareware circuit back in the mid 1990s, Exile draws a lot of influence from games like Ultima (most prominently in its dialog system) and various Dungeons and Dragons inspired games, most especially the Gold Box series and its top-down, turn-based combat system.  Its UI and overall aesthetic is similarly simple, though with a more modern (for the time) UI that supports both mouse and keyboard input.  The setting is an interesting one too, largely taking place in a subterranean world where humans are the minority next to two native races: The cat-like Nephilim and the Slithzerikai, a lizardman race.

There's more to tell, but I'd be doing it a disservice by going into too much detail.  So if you're a fan of old-school RPGs that are heavy on the storytelling and challenging combat, Exile is one you may want to check out.  And since all three games are now freeware (as is the game-creation toolkit, Blades of Exile), you've got nothing to lose by doing so.  You will probably need to use a VM, though, as they are 16-bit executables and are not compatible with 64-bit operating systems. 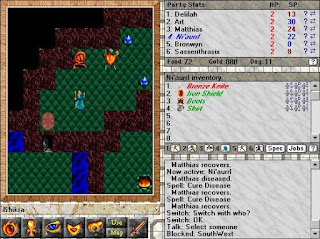