Most Disappointing Games of 2018 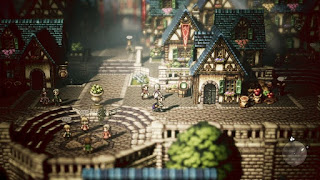 How long has it been since the last time Square released another forgettable "homage" game to appease nostalgia-worshipping fanboys who piss their entire lives away waging internet wars from a time capsule of the 1990s in their parents' basements?  ...Two-three years?  Good enough; crank out another one.

I'd like to say they were at least competent in making something to pander to the worst people in the world, as I wouldn't even bother putting it on the list if it were just bland and boring.  But sadly, I can't do that in Octopath's case.  They didn't even attempt to replicate the visual style that fanboy wet dreams are built on, instead throwing 2D sprites, 3D voxels mimicking 16-bit spritework, fake distance blurring and harsh directional lighting into a gigantic clashing mess that just looks gaudy and horrible.  The narrative is equally cringe-worthy, being packed to the brim with terribly-acted, purple-prose-laden dialog that makes the whole experience about as enjoyable to sit through as a killer bee enema.  Even putting those basic failings aside, though, there's simply nothing worth seeing here for any discerning genre fan - it's the same empty bash-A-to-win gameplay, cookie-cutter story tropes and flat characters Square has been repackaging over and over again for decades for people who are afraid to ever play anything with post-1996 design sensibilities because it might force them to think that maybe, just maybe, they don't know better than everyone else who's ever lived after all.  Leave this dreck where you find it and support something that's content to try new things, not just live forever in the comfort zone of unemployable troglodytes who still think gaming, much like themselves, peaked when they were ten years old.

* You may think this entire rant hypocritical coming from someone whose top 100 games list includes numerous titles from the 1990s, quite a few of which are RPGs.  Well, you'll just have to figure out why that isn't the case on your own, Mr. Knee-jerk Sophism-spewing Narcissist. 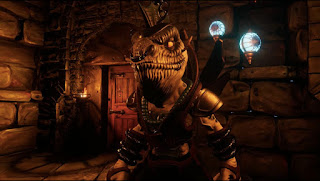 Underworld Ascendant got people buzzing at the time of its announcement, and it isn't hard to see why. A spiritual sequel to a cult classic DOS franchise (the Ultima Underworld spinoff series) from a company founded by Looking Glass and Irrational Games alumni and later joined by legendary developer Warren Spector; how could it go wrong? Well, the answer turned out to be "releasing a very buggy, unfinished disaster with clumsy collision and physics, graphical bugs aplenty (with models often stretching into indecipherable masses of polygons) and a save system that puts the player back at the start of a level, regardless of their progress". This, plus just generally feeling amateurish and poorly-optimized, with memory leakage, uneven framerates and frequent crashes emblematic of amateur-led Unity games, makes Underworld Ascendant a cautionary tale about the risks of crowdfunding and coasting on residual prestige. There has since been a patch released to attempt to fix some of these problems, but as far as I'm concerned, it's too little, too late; if you want a good action-oriented dungeon crawl, you have plenty of better options than to wait for this one to maybe possibly reach the realm of "passable" one day. 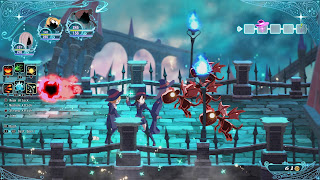 An action-RPG lootfest based on the anime series, Chamber of Time features gameplay reminiscent of Dragon's Crown, only nowhere near as good.  The dungeons have very little to them (only about 3 screens in length outside of story-related ones, which just get tedious puzzles instead) and the overall variety of enemies, spells and characters is severely lacking, resulting in a game that gets tiresome quickly.  Moreso when the game forces you to adhere to a schedule for timed events, which means either a lot of waiting around or burning through dozens of Movement potions to teleport back to your room so you can sleep and wait for the next thing to happen.  There is some charm in its visual style and animated cutscenes (many of which were created just for the game) if you're a fan of the show, but overall, it's just a forgettable, mediocre beat-em-up lootfest with a pretty paint job.  One Bandai Namco had the gall to sell for nearly full price, even!  Dragon's Crown came out on the PS4 this year too and is available for half the price of Chamber of Time, so do the right thing - pick up that game instead.
3. Iconoclasts (Konjak, PC/Mac/Linux/PS4/Vita/Switch)

It seems that with the advent of the indie scene, Metroidvanias have more common than any other genre made these days.  More than that, though, they're just starting to become overdone; they have to be immaculately well-made to hold my attention anymore, and Iconoclasts sadly stumbles on that front.  The puzzles and combat are all one-note and get tiresome after only a short while, and the environments really aren't interesting or fun to explore, making the constant backtracking a chore.  The story didn't thrill me either, mostly just feeling like another trite dissertation on religion and faith from someone whose only exposure to such is skimming a few Wikipedia articles and watching Fight Club's first half before building an entire worldview, lifestyle and set of mantras around the words of its amazing hero Tyler Durden without a single shred of irony.  I was tired of that self-aggrandizing whinefest long before I graduated high school, and by extension, I got completely bored of Iconoclasts only a few hours in. 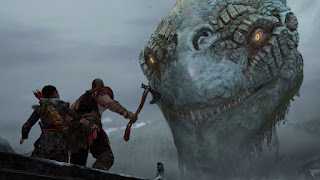 I actually didn't want to include God of War on this list.  In fact, for the first several hours, I actually really enjoyed the tone and narrative of a God of War game and the fact that it told a legitimately good tale of a father and son bonding over the course of a tragic and personal journey - a stark contrast to the old games' stories, which were little more than a series of excuses to put things in your path to kill, curse words to yell and boobs to grope so you can feel like a MANLY MAN.  Just a shame, then, that the emotional angle gets all but forgotten and the gameplay wears thin well before the end.  Constant, repetitious encounters with the same half-dozen enemies just get grating after the dozenth time you see them, and 90% of the puzzles and subquests you encounter are more of the same - content for the sake of content with virtually no variation, satisfaction or tangible payoff for completing them.  If God of War were fifteen hours shorter, kept to its opening premise and dropped about 90% of its lame subquests it would be gold, but as it stands it's just a chore to slog through, much less get full completion in.  Just more proof that knowing to stop when you're out of ideas is a concept stunningly few AAA developers can grasp. 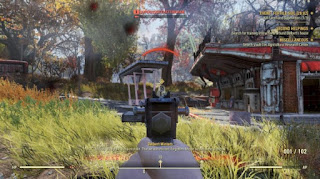 Rarely has a mighty franchise fallen so hard without the poop-smelling hand of EA to push it.  Fallout 76 is an online multiplayer co-op take on Fallout 4, which sounds like a good idea on paper - they could finally take the numerous underdeveloped concepts from that game and work them into something more substantial, letting the player lay claim to territory in the wasteland by scavenging materials, building towns, setting up defenses and arming settlers (other players) to fight against other player factions looking to do the same.  Too bad what they actually did was just more of the same underdeveloped ideas, only now with the ability to drop missiles on parts of the map to turn them into irradiated zones with *sigh* stronger enemies and randomized loot, and that's... really about it.  There's no decent storyline, no non-player human characters to interact with, and really not much to do other than kill monsters and complete dull cookie-cutter quests with very little tangible payoff.  Making a thoughtless multiplayer mod for an old game and selling it at full price is bad enough, but more damningly, Bethesda has neglected to implement some extremely basic anti-cheating measures, opening the floodgates for rampant player hacking the likes of which have not been seen since Diablo 1 and Phantasy Star Online on the Dreamcast; how do you not have that kind of foresight in 2018?!  Being a product of this era of gaming, let us also not forget scammy microtransactions, misleading advertising and some of the worst attempts at damage control I've ever seen, because no online game is complete without those anymore.  But if that's still not enough, then how about the fact that the game is the target of lawsuits for being so unplayably broken, wasn't launched on Steam to avoid having to give out refunds, and was already put on discount when it had barely been out for one week?  Yes, even a week out, with a prestigious company name and a beloved IP behind it, Fallout 76's reputation was already such that it couldn't even sell copies during the holiday season; that is simply pathetic.  If you want the same concept of a co-op lootfest game but done well, you've already got a million better options than this.  If you just want a competent open world RPG, dust off any of the earlier Fallouts and give them a replay.  Hell, I'll even recommend the much-hated Fallout: Brotherhood of Steel over this one, because at least that game doesn't crash every twenty minutes...