The Gold Farming of the Avatar

I switched out Mariah for Dupre off-camera, as he can use a bow while she cannot. We just need a decent ranged weapon for our secondary characters; it's not as much of an issue in the NES version to have an underequipped party because the last dungeon is done solo anyways.  He can be found in the bar in Trinsic. 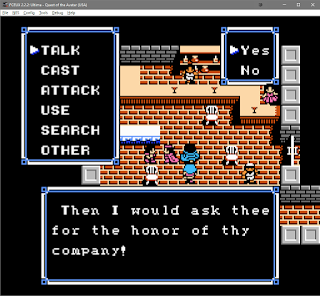 A relatively quick way to earn money is by visiting Shame.  There is a room on the 6th floor that has 22 chests to collect.  Exiting the dungeon and re-entering resets the chests, which can earn you about 1000 gold per trip.  There are two relatively quick ways to get there.

Through Shame
Through Hythloth (requires the Key from Buccaneer's Den)
To quickly exit from the bottom floor, return to the Room of Courage.  Go thorugh the north doorway to end up in Destard, then cast Exit.  Destard's entrance is with a relatively short walk to Castle Britannia.

Quick Exit
Go back to the bottom floor of Shame, but when you go north from the dragon room, follow the hall to the end and enter the Courage room instead.  Go south from here to reach Destard, then cast Exit.  This is within walking distance of castle Britannia.
Weird Stuff
I also hit a weird, glitchy random encounter on the eighth floor of Shame where my entire party was outside the bounds of the battlefield, fighting some enemies within the bounds.  Both sides could freely fire ranged attacks at one another, and once I beat it I had to walk off the screen to get out.  Not sure if this is an emulator-only trick or if it occurs on an actual console as well, but I thought it was a bit humorous (and worrying considering I was close to the gold total I needed). 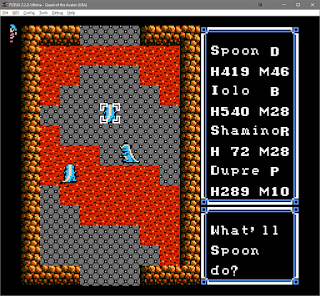