Places of note
Some useful Fluxes
Some useful artifacts
You can also run into the Starship Enterprise itself in an encounter, though you annot communicate with them and they will immediately open fire on you, forcing you to destroy them or flee.  From what I gather its location is entirely random, but here's a screenshot of it in the Commodore 64 version of the game (taken from Mobygames): 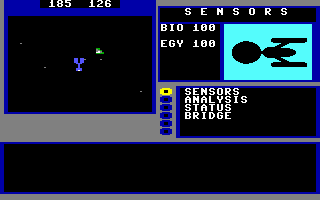