As I've mentioned before, Ultima IX is a strange case; originally planned as a grandiose title worthy of the Ultima name, a short EA-mandated deadline forced numerous rewrites and plot cuts, resulting in a final product that barely resembles an Ultima game at all, let alone its creators' original vision.  Still, the developers attempted to salvage what they could from their original project, resulting in many strange and disparate elements. This is perhaps best highlighted in the game's FMV sequences, so let's take a look at them all one-by-one.

No early trailers show footage of the introductory sequence, suggesting it was one of the last FMVs to be completed.  It simply establishes the appearance of the columns, which are a central focus of the plot in both the original script and the final game.

A lengthy FMV showing the Avatar arriving in Britannia (only to immediately be attacked by a Wyrmguard) and some dialog between Blackthorn and the Guardian.  There is a noticeable shift in the CGI quality between the Avatar and Guardian segments, showing that the former was created much earlier in development.  The latter was most likely added after the script was finalized; Blackthorn and the Guardian are still in league in the original script, though the former plays a much larger role, covertly spurring on the civil war brewing in Britannia by sowing distrust among its three major factions.

The "Armageddon" FMV seen in the final game only really serves as a premonition of doom; the Avatar sees it upon examining the magic mirror in Lord British's room, and it plays again later in the game as a vision of what will happen if Lazslo the gypsy refuses to help the Avatar.

This FMV was famously intended for the game's original ending, which would depict the Avatar and Lord British atop Stonegate casting the Armageddon spell and destroying the planet to prevent the Guardian's resurrection.  However, the people of Britannia would be spared by taking refuge upon Skara Brae, which, protected by the Barrier of Life, would then blast off into space and touch down on another world.

The shot of the villagers being reduced to charred skeletons was most likely edited in later; it doesn't really make sense in the scene's original context.

The first story-related sequence, depicting the Avatar being ambushed by Blackthorn as he exits Despise.  Raven comes to the Avatar's rescue, killing the Wyrmguard and injuring Blackthorn's eye.

The original script instead has the Avatar be ambushed as he makes camp by a dragon-riding Wyrmguard named Slaine (Blackthorn is not present).  Raven comes to his aid in the battle, spearing Slaine through the eye and driving her off.  Slaine was intended to be a recurring villain throughout the game.

A scene of the Avatar opening a maelstrom and diving in to reach Ambrosia.  Again, no early footage of it seems to exist, suggesting it was created after the script was finalized.

Another FMV created after the revised script was finished, depicting Samhayne's betrayal and the Avatar's capture by Blackthorn.  However, it immediately leads into another FMV...

...Which is of noticeably lower quality and does not match the jail cell you see in-engine.  That's because this FMV originally had a much different purpose; it would depict the Avatar being locked up in Wrong for spying on one of the members of Lord British's tribunal.  Lord British himself would also be present due to the scene being a vision/nightmare sent to him by the Guardian.  The final cut excludes the shots of Lord British, but they are visible in some of the early trailers.

At roughly the midpoint of the game, the Guardian summons the Avatar to Terfin and destroys Skara Brae as a demonstration of his power.  This FMV was created once the final script was in place.  Ironically they did not use the Armageddon FMV to depict Skara Brae's destruction, even though it would have fit the scenario perfectly.

A scene of Raven branding the Avatar with the symbol of the Guild.  This originally occurred much earlier in the plot, with the Avatar joining the Guild in order to work undercover and unravel the conspiracy behind the brewing civil war.  Like the jail FMV, this was intended to be another vision/nightmare shown to Lord British by the Guardian, intended to sow distrust between the two of them.

These sequences would eventually culminate in a vision of the Avatar standing over a small army of soldiers outside of Lord British's castle and a menacing shot of him with flames at his back, suggesting to Lord British that the Avatar had turned on Britannia and intended to overthrow him.  This is visible in some of the early trailers, but makes no appearance in the final game as that subplot was entirely removed.

One of the game's most notorious scenes depicts the Avatar summoning Pyros to gain access to the Stygian Abyss, which is entirely contradictory to Pagan's story and the lore of the Ultima universe. Like many, this scene originally tied into the subplot about the Guardian manipulating Lord British through nightmares; this would be one of the first ones shown to him.  This FMV was also heavily recut from its original incarnation, which depicted Lord British witnessing the event from his castle balcony, Pyros towering into the sky above him and Lord British awakening just as Pyros moved to attack him.

The final cut excludes all the shots of Lord British and fills the background with trees and clouds to cover up the castle, though they missed a bit of the outer wall in one shot: 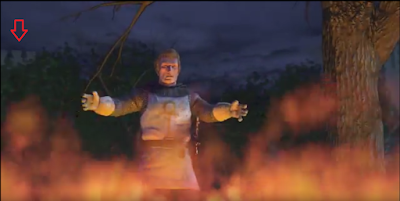 This scene depicts Lord British aligning the moons and opening a Moongate so that the Avatar can travel to the Shrine of Spirituality.  This one was definitely created once the final script was in place, though some of Lord British's spell-casting animation may have been reused from the original Armageddon FMV.

And finally, the ending, which depicts the Avatar and Guardian becoming one being again, destroying the columns and departing Britannia for good, leaving Raven and Lord British behind.  Again, this was clearly created for the final plot, though its premise somewhat ties into the original script.  In it, Hawkwind (aka the Time Lord) is revealed to be the last of a race called the Ultima, who separated from the darkness in their minds; these "Dark Avatars" would later go to war with the Ultima, with their battles nearly resulting in the destruction of the universe as a whole.  With Hawkwind and his dark counterpart as the only survivors, they eventually gave up fighting and became one being again, gaining tremendous power and knowledge in the process.  With this, Hawkwind created the eight Virtues (and the Quest of the Avatar) as a means to ensure that such a catastrophe would not occur again.  This lends some urgency to the story, as history threatens to repeat itself should the Guardian (a dark mirror of the Avatar in both versions, though with a vastly different backstory in the original script) be successful in his plan to destroy Britannia.

The final version of the story makes no reference to the Ultima race or the Dark Avatars, though it is mentioned that the Guardian is the Avatar's "evil half" and that in order to save Britannia, he must become one with him again and transcend his mortality in the process.

On a final note, one (in)famous element of Ultima IX's trouble development was that Michael Dorn was initially hired to voice the Guardian, and even recorded most of the character's dialog.  However, the developers had Bill Johnson reprise the role in the final version of the game; possibly owing to the plot cuts rendering much of his dialog unusable.


And now, a few pre-release trailers that reveal snippets of unused, unfinished and recut FMVs.

This trailer from 1998 shows that many of the character animations and spell effects were changed as development went on (probably a good thing, as most of them look very jerky and cartoonish here).  More importantly, it also contains many shots from FMVs that were either recut or went completely unused in the final game.

Mostly indicative of the final product,  though it contains part of an FMV that went unused in the final game, depicting Lord British asleep on his throne before a pair of giant red hands drags him into the ground.  Its context isn't entirely clear, but it was most likely intended as another nightmare scene.

Another trailer from 1999.  This one includes brief shots of Lord British awakening and the Guardian's eyes, as well as unused shots from two of the "nightmare" sequences - Lord British is attacked by Pyros and witnesses the Avatar being jailed.  Another close-up of the Guardian's face is also seen, most likely intended to fade into one of the nightmare scenes.

The intro to Ultima Online: Renaissance, which is noteworthy for the fact that its footage is almost entirely comprised of deleted scenes from Ascension; the developers simply recut them and dubbed in new dialogue to match the Renaissance's storyline.

And finally, the Armageddon FMV with some shots restored: namely, those depicting Lord British and the Avatar on Stonegate's roof casting the spell and a brief line of dialog afterwards.  None of the voiceover is in place, but according to the Ultima Codex, Lord British's line is:


Not directly related, but the Avatar's Ultima IX model also appears in the introductory video to Ultima Online.  The scenes depict him (as the stranger) entering Mondain's castle, slaying him and viewing Britannia in the shattered Gem of Immortality. 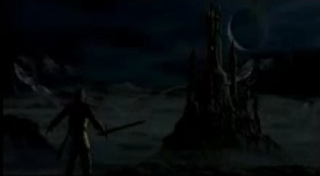 The stranger in front of Mondain's castle. 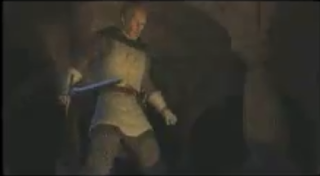 The stranger stands over the slain Mondain and the shattered Gem.

Britannia, as viewed through a shard of the Gem