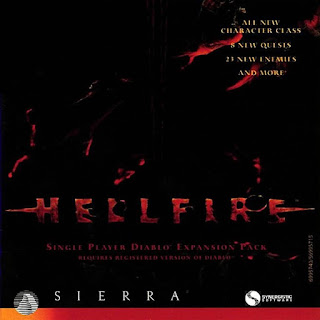 To unlock the two hidden classes (Bard and Barbarian) and enable a couple of unused quests, install the Hellfire 1.01 patch, then create a file called COMMAND.TXT (all caps) in your Hellfire directory.  Have this on a single line in the file:

Note that the Bard and Barbarian, while fully functional gameplaywise, do not have their own graphics; they simply reuse the Rogue and Warrior's sprites.

A quick rundown of the new classes.

Barbarian - The Barbarian is a more specialized Warrior, having much higher vitality and health gain but no innate magical ability whatsoever.  Barbarians can wield two-handed weapons with a single hand, or, when using them two-handed, can hit all enemies in a three-square arc in front of him (the latter is preferable, as he only gains half the defensive bonus from shields).  Additionally, he also gains an innate +1% bonus to all resistances with each level gained, and an extra point of Armor Class for every four levels earned.  His special ability is Rage, which allows him to gain a temporary boost to Strength, Dexterity and Vitality for twelve seconds followed by a twelve second "cooldown" phase with a substantial penalty to all stats.  This also permanently lowers their maximum HP, but due to a bug, interacting with one's inventory in any way will reset it to its normal value.

Bard - Bards have average stats all-around, which means that they can be used fairly well in any role but will never be as good as a specialized class in any of them.  On the other hand, they make up for it with the ability to dual-wield one-handed weapons; this lets the Bard take advantage of two magical weapon effects at a time and hit enemies in a three-square range in front of her at the cost of defense.  Her special ability is Identify, which allows her to discern the effects of magical items without using scrolls or paying Cain.

Monk - Fighters who do better with fists and staves rather than more traditional weapons and armor.  They get much greater attack speed with fists and staves, and the latter allows them to hit all three spaces in front of them with a single swing.  On the other hand, they actually gain much less Armor class from mail or heavy armor than they do from light armor, and their relatively low health makes them unable to take much damage themselves, effectively turning them into a "glass cannon" archetype.  Their special ability is Search, which allows them to highlight all items on the ground in the current map.