Just to prove that I can make a top ten about anything.

But first, a couple of honorable mentions.

Mach Rider and Excitebike are fairly obscure games today, but they has a legacy as some of the very first titles released for both the NES and the Famicom, and still enjoy a small cult following. In their rush to port Famicom games to America, though Nintendo would often cut corners, from simply throwing simple pin connectors onto Famicom boards (which clever fans can utilize to play imports without a third party adapter) to porting over games without bothering to remove code for unused features. These two games are an example of the latter; they both features a custom course builder that required a tape-driven peripheral called a Famicom Data Recorder to save custom-made tracks. In the NES version, though, attempting to save or load a track will simply hang the game as it tries to access a device that's not there. Perhaps the funniest part, though, is that even the manual explains that the options don't work and even gives a pithy excuse that they were left in "for potential product developments."

Thankfully, the Virtual Console release addresses this issue and allows custom tracks to be saved and loaded as intended.

A below-average platformer released in the mid-90s by Interplay, Boogerman's password system is the first one I can recall that perplexed me. You don't save your progress with a series of letters, numbers, or even symbols - you use character sprites. Yeah, they expect you to write down "Scab Creature, Fart Ghost, Abdominal Sewer Man, Boogerman" if you want to come back to your game later. At least it's only four characters long, I suppose.

A simplistic RPG from the early 80s that remains a cult classic in Japan but never really had a chance in the rest of the world (primarily due to not seeing a release there until Zelda had been out for over two years), it also featured one of gaming's most confusing save systems. Well, okay, it's not too bad once you know how it works, but it certainly isn't very inuitive. I'll explain; the game has both a "save/load" feature and a password system, but they both serve very distinct purposes. Save/load essentially serves as a savestate - you can save the game at any time and reload to end up at that exact point. So where does the password come in? Well, the savestate data isn't backed up to any internal RAM - in fact, Hydlide doesn't have internal RAM at all, so the savestate data is erased once you shut off the game. If you want to be able to shut off the system and come back to it later, you'll need to write down the password and punch it in.

Mega Man's Soccer is a game that's notorious for being released incomplete, to the point that the means of accessing the ending and credits weren't even programmed in (the game simply boots you back to the title screen after winning the last match) and there's a "hidden" team that can only be accessed via Game Genie or a similar device.  But that's not why we're here, so let's get back on topic. Most Mega Man password systems aren't too bad; you simply plunk down 5-6 dots on a 6x6 grid and you're good to go. Sometimes there's more than one color of dot, but that's not too big of an issue. But this one, oh hell:

IS THIS REALLY NECESSARY?!

Here's one for a game you've probably never played on a console you probably never bothered with. As highlighted in Mikeyspiky's review, this game's password system is downright asinine. Not only does it use SYMBOLS in place of numbers or letters, you're given only a few seconds to write it down, so you'd better draw fast or have a good memory. But if that's not bad enough, get this - the symbols aren't even shown in plain sight on the title screen, they're all obfuscated by numbered calendar pages. You have to decode what calendar number maps to what symbol just to punch the goddamn thing in.

It's pretty rare to see a password system on a platform this recent, but they do make an occasional return, usually as a means to import data between players or different games. Etrian Odyssey is one such case, allowing you to input a password the first game gets you to get a couple new items and some other fringe benefits in Etrian Odyssey II. However, it's not very well implemented. Not only is it an extremely long code to punch in (45 characters), it utilizes a combination of uppercase letters, lowercase letters and numbers, and it's also quite buggy - many users (myself included) would punch it in exactly as shown and get nothing for their work, eventually forcing Atlus to release one that was confirmed to work in order to address complaints.  Unsurprisingly, the 3DS remakes of the first two EO games discard this feature entirely, instead transferring data between titles via optional "Extra Data" files stored to the system's SD card.

Ah yes, Rambo. A shoddy clone of Zelda II created by the masters of 8-bit crap, Pack-in Video (the same guys who brought you Knight Rider, Thunderbirds, Die Hard and that horrendous Predator game). But without question, one of the game's worst facets is its password system. It's obnoxiously long (32 characters) and utilizes uppercase, lowercase, numbers and even punctuation, making it a total nightmare to write down. On top of all of that, the game is notorious for handing out bad and invalid passwords, which can unfairly force you to repeat a lot of work. The best advice I can give (if you actually want to play this game for some unfathomable reason) is to get no less than three passwords at each checkpoint before you shut the system off.

One of the finest sidescrolling beat-em-up/RPG hybrids ever made. Actually, probably one of the only sidescrolling beat-em-up/RPG hybrids ever made. But man, is its password system a nightmare. 33 characters with uppercase, lowercase, numbers, symbols and even apostophes that can go over letters just to make it even more annoying. But even stranger, if you exit the screen and come right back in without doing anything in between, the game hands out a completely different password that gives you the exact same stats upon punching it in. I have no idea how this thing even works!

The US version of Maniac Mansion is a game with an amazingly complex and well composed soundtrack for the NES, and my personal pick for the greatest adventure game of all time. However, not too many people know that two years before its release, the Famicom got an entirely different version; while it did feature uncensored violence (unlike the US version), it also lacked screen scrolling and had pretty bad sound. But undoubtedly the biggest step down was that rather than utilizing a disk or battery backup, this version of the game had passwords that were a whopping 104 characters long. 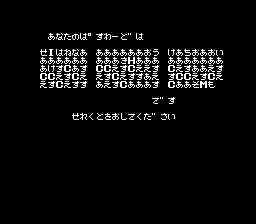 No, your eyes do not deceive you. 104. Fucking. Characters. I don't know about you, but I'd rather just start over than spend twenty minutes punching all that shit in!

UPDATE: TCRF reveals a hidden apology for the atrocious password system in the game.
1. Golden Sun: Lost Age (Game Boy Advance)
Oh, you thought 104 characters for a password was bad?  Well, how about we double down on the crazy and have you punch in a password consisting of 260 characters instead? 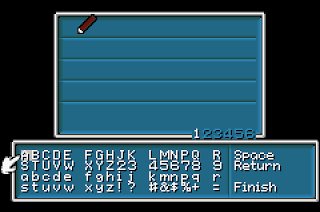 Yes, if you want to carry over all of your character stats and items to the second game, you need to first complete the game, find the hidden menu that gives you the password, and then punch it all into the second game on a menu spread out over six pages.  Aye.  To Camelot's slight credit, though, they do omit some of the characters that are easy to confuse such the letter O and the number 0, as well as the uppercase I, lowercase l and the number 1... but inexplicably decided to keep the upper and lowercase S letters and the number 5, as well the lower-case i and j and an exclamation point, so there's still plenty of confusion to be had unless your handwriting or typing is impeccable.  Not to mention you're doing all of this with a D-pad; Etrian Odyssey at least had the benefit of a touch screen!

Also to their credit, they offer an alternate solution to transfer data via a system link cable instead; yes, that requires two systems, a copy of each game and the link cable itself, but it is a far less headache-inducing alternative to typing in all of that nonsense by hand!