We meet up with Pagan's forgotten gods and finally get a bit of direction to our quest.  Unfortunately, that direction entails solving more annoying magic quests...

I neglected to show it on-camera, but here's the purpose of the Skull of Quakes.

(Thanks to Prescient Dragon's Ultima 8 site for the map!) 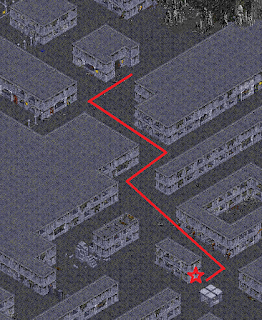 From the entrance to the Birthplace of Moriens, head east by southeast to find a small area with an odd structure and a red indentation in the wall. 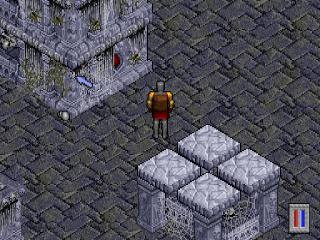 Use the Skull of Quakes on the indentation and the structure will collapse, revealing a small area below.  Drop down and enter the door to find a hidden teleport pad. 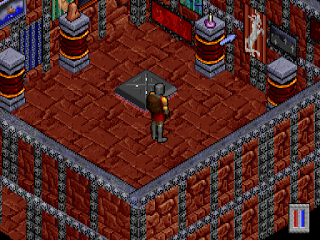 A letter in the palace reveals that Mordea was seeking the Skull of Quakes, hinting that it may have had a larger role in the plot at one point.  It was probably intended to open the path to some dungeon or another, but as it stands, it's just a curious remnant in a very hastily-tied-together product...

Another leftover in the game was also brought to my attention. 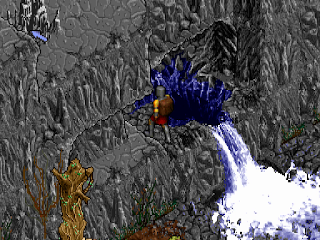 If you follow the path out of town in West Tenebrae and then head north, you'll come to a small waterfall.  Climb up onto the ledge next to it and you'll find a hidden cavern with a skeleton and two mandril enemies.  Inside is a chest with some chainmail armor, some explosives and a red and black potion. A decent little bonus for the early game, but there is also a curious oddity here: searching the skeleton in the south corner of the room also reveals an odd blue bottle with no name and no apparent functionality. 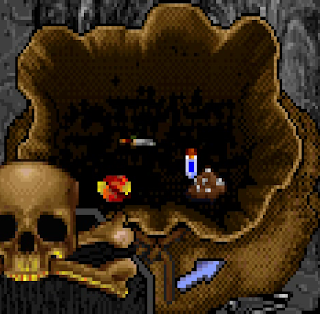 To the best of my knowledge, the bottle does not appear anywhere else in the game.  Was this intended to be some kind of plot item that ultimately went unused?  We may never know for sure.