Very much a departure in style from the previous Ultima games, Pagan is not so much an RPG as an isometric action platformer with some light RPG elements.  Which would be fine if it were a quality game, but unfortunately it also suffers from an awkward mouse-driven control scheme, a confusingly layed-out game world and heavy plot cuts due to a rushed development schedule.

As for me personally... I don't recall it being very fun.  Or even particularly good as a game.  We'll see if that holds true this time around, I suppose.

After numerous fan complaints arose, a patch for the game was released that introduced several interface hotkeys, allowed for mouse-targeted jumping and disabled all moving platforms in the game, making it considerably easier to navigate.  If you have an older version of the game, I highly recommend downloading the 2.12 patch here.

A short overview of the controls

If you have the patch installed, there are also several hotkeys to utilize.

An expansion pack called the Lost Vale was also planned for Pagan, but was ultimately never mass-produced due to the game's poor reception.  The code for it has also since been lost, so the only surviving remnants of it are some box scans and a handful of low resolution screenshots.  From what we can gather, the plot was supposed to center on three of the missing gods of emotion who were sealed away by the Titans (only briefly mentioned in the core game), and that it would have you confront several minions of Hydros as enemies.  Other additions would have included a bottomless "Bag of Reagents" that would eliminate the need to collect them (similar to the Ring of Shal from Serpent Isle) and a "Tiny-Tar" spell that would cause the Avatar to shrink, allowing him to enter new areas only accessible through small gaps.

Ultima VIII: Gold Edition on GOG (includes the patched version with the Voice Pack installed)
A comprehensive fan site for the game


And finally, some miscellaneous stuff I didn't point out in the video: 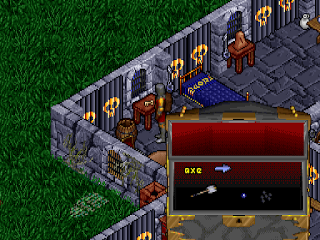 You can visit Shaana the executioner's house in West Tenebrae if you want, though she won't have much to say.  However, you can also rob her chest in order to get an axe (a major upgrade from your dagger), a gem and a bit of obsidian.  The key is under the book on her nightstand. 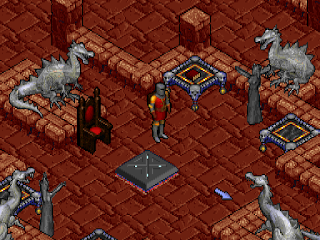 You should also visit the recall pad on the second floor of the palace, so that you can quickly return to Tenebrae at any time via the item Mythran gives you.  I do this off-camera to save a bit of time in the next video.