We visit the six temples, revive Gwenno and prepare our means to stop the Banes.

Stuff I didn't get on camera due to a mistake on my part! 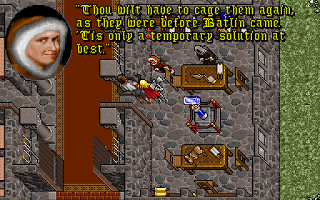 First, you will need to talk to Gwenno once she is cured of her madness.  She will mention trapping the Banes again, and that the mages of Moonshade may hold the key to this. 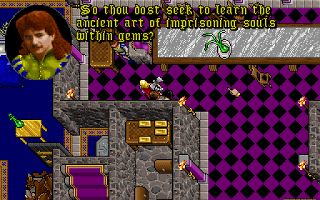 Talk to Torissio about soul gems, and he will give you the Create Soul Prism scroll in exchange for the Philanderer's Friend.  Transcribe that scroll into your spellbook immediately, as it's a one-of-a-kind item and we'll need to cast it multiple times. 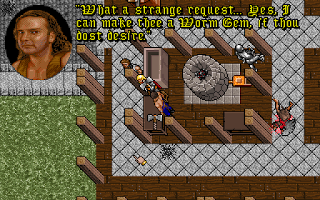 Next, talk to Ducio, who will create three Worm Gems for you at a cost of three Worm Hearts each.  (This seems to be a bit finnicky; you may have to talk to him several times before he actually makes one, let alone all three.)  Then cast Create Soul Prism on each one to turn them into Soul Prisms.

Now we need to make a trip to the three Chaos Shrines to empower them. 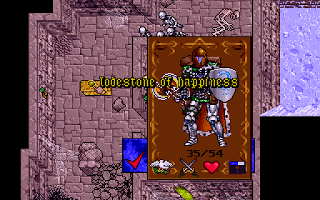 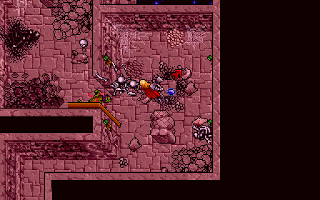 These are much shorter than the Shrines of Order, probably due to more plot cuts.  First up is the Shrine of Emotion, where you must gather the four lodestones and place them atop the four small pillars at the fountain to cause the Water of Emotion to flow once again.  Be sure to click on the green spot on the wall to talk to the ghost, and smash the nearby column to find the fourth one. 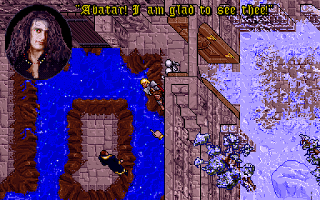 We actually don't need to visit the Shrine of Tolerance just yet (since the shrine we need to get water from is in Gustacio's basement), but since we're doing this all in due course anyway, we might as well get it over with.  Here you find Mortegro, who is trapped. 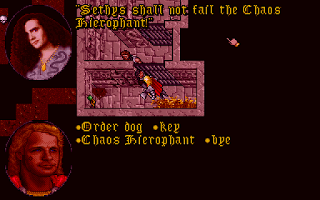 Go into the basement and talk to Sethys, who won't have much to say to you as he confuses you for a follower of Order.  He does reveal that he's lost the temple's key, however.  So cast Serpent Bond and sneak into the wall beside him to find a hidden cache full of gold (and the gold key).  Use that to free Mortegro, and he will give you another vitally important spell in Summon Shade (again, you should transcribe it immediately).  He'll also sell you any other spells from his catalog at half price.

He offers to join the party, but as soon as you step outside the temple, he'll be hit by a Teleport Storm and whisked away to parts unknown, never to be seen again.  You can avoid this by using Serpent Bond to sneak Mortegro past the plot flag, allowing you to keep him in your party.  He is rather wimpy, however, so you may want to give him the Belt of Strength and a ranged weapon to make him a bit less vulnerable.

(Note that, due to incomplete coding, he will refuse to leave the party when told to, and he has no reaction to returning to Moonshade, so the only way to remove him from your group hereafter is to kill him.  Or take him back to the shrine and let him get teleported away.)

We'll come back to wrap up Sethys' subplot a bit later. 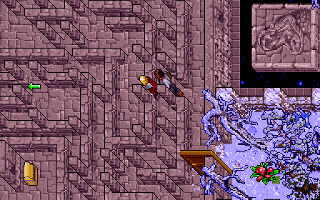 The Shrine of Enthusiasm is another bare-bones dungeon, just consisting of a maze that spans three floors.  With a bit of trial and error, you should make it through and reach... 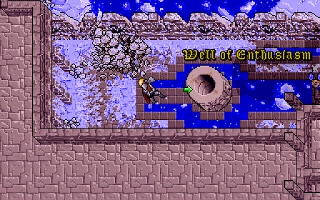 (We'll be back here later too, but we don't need to traverse the maze again, thankfully.) 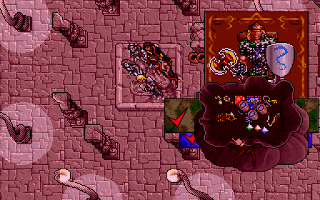 Once you've got the three waters of chaos, use them on the three Soul Prisms to create the Prisms of Enthusiasm, Tolerance and Emotion.  Then fix up the Black Sword with the Flux Analyzer to repair its soul-trapping capabilities.

Finally, you'll need to track the Banes.  Each of the three Chaos Temples has a different means of doing this in the form of a unique object in each - the Web of Fate in Tolerance, the Moon's Eye from Emotion, or the Magic Lens in Enthusiasm.  Each one will show you a scene of the Banes gathering in the Castle of the White Dragon.

(Alternately, you can have the Hound of Doskar track Iolo's Lute, Shamino's Book or Dupre's Shield; this will not show you the scene, but the castle will be unlocked regardless.)

Regardless of your chosen method, though, this will enable you to enter the Castle of the White Dragon.  Arm up your party (return to Spinebreaker to fill your empty party slots with automatons and retrieve your allies' equipment if you haven't yet) and be prepared for a tough battle!