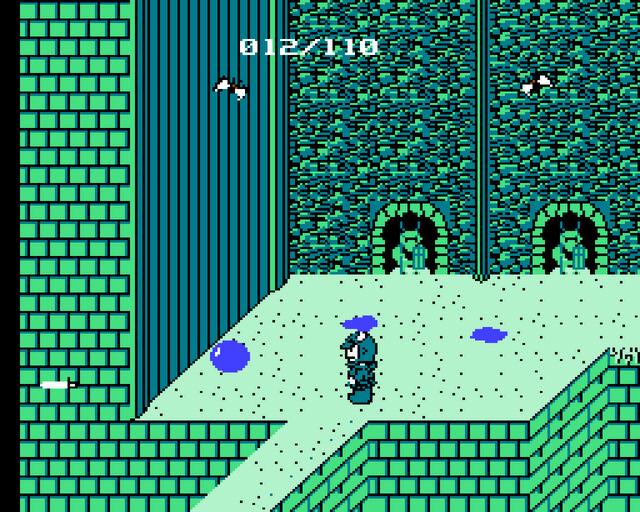 One of the first Japanese RPGs to be released in North America, and like Hydlide, it's another example of a game that was passable in its day but which has not withstood the test of time whatsoever.  As in many old RPGs there is a very heavy emphasis on grinding in order to earn money and upgrade gear, and the sheer size and number of enemies in each tower you had to traverse was downright staggering, requiring you to either have an impeccable memory or make maps.  Death also came very easily, with enemies able to deplete your health in only a few hits and you easily being able to fall off the tower to an instant death in almost every room, only exacerbated by the fact that you frequently had to exit rooms via very narrow pathways with nothing stopping you from slipping right off.  There's a lot of content and longevity for a 1987 release, but with the advent of far more refined and playable action-adventure games like Zelda, Crystalis and Rygar, Deadly Towers was destined to be left in the dust. 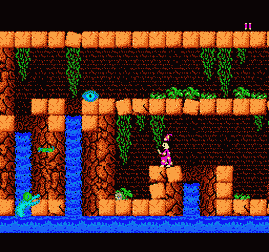 It's our old friends Color Dreams/Bunch Games/Wisdom Tree again, and they've brought us another lousy gaming experience in Castle of Deceit.  While the game's visuals are decent, everything else is just very off-putting.  Your awkward attack (a single shot that travels slowly and can only have one instance onscreen at a time), countless cheap shots from enemies who all take multiple hits to kill, your incredibly awkward jumping and slippery walking.  And of course, what game is complete without bad music, ear-piercing sound effects and uninspired find-the-key level design?   Ah yes, and the last stage of the game is one of those famous mazes of identical looking rooms, and you know how much I love those.  Ill-advised on every front, Castle of Deceit is just one more reason why Color Dreams should have exited the gaming industry at the first opportunity. 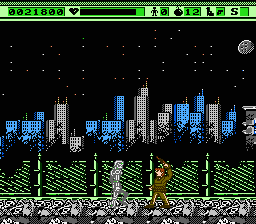 Yep, we've got another bad licensed game here from two companies known for producing much of the same.  Programmed by Radical Entertainment and published by Mindscape, that is.  One would think that a license like the Terminator would be pretty easy to adapt to video game form, but they once again found a way to screw it up with sloppy hit detection and an awkward aiming system that requires you to both be on the ground and holding a button to aim, then pressing a direction and another button to fire.  That's bad already, but then they throw in some extremely ill-advised puzzles just to make the experience pretty much unbearable.  And by that, I mean that to escape the police station, you have to find a box, then somehow know to carry it with you and throw it in just the right spot in a pit of fire to give yourself a platform to jump across it.  Discounting that none of the other fire in the level is an instant death and that the matching scene from the film did not have the building on fire.  Then you come to the factory where you have to hunt keys and crush the Terminator in a steel press to match the end of the film, notwithstanding that you've been gunning him down every five seconds throughout the entire stage.  Terminator is an exercise in asininity no matter how you cut it and a prime example of bad licensed schlock to boot. 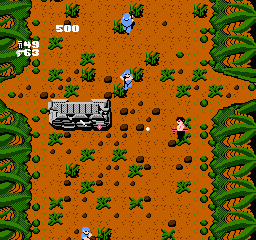 Ikari Warriors honestly wasn't a bad game in the arcades, making use of an experimental "rotary joystick" to allow your character to move and fire in two different directions simultaneously, and providing a bit of good, if repetitive, shoot-em-up fun.  The NES port, however, is proof that excess leads to ruin.  In attempting to emulate the rotary control of the arcade, your character now just slowly steps in rotation to orient his shots, making dodging attacks all but impossible, especially later on when enemies and explosions being to swarm the screen.  Levels are excessively long and tedious, taking upwards of fifteen minutes apiece to complete, and they are laden with countless cheap deaths due to extremely fast enemies and bullets, shots that appear with no warning, and mines lain on every blind spot imaginable (whenever you see a bridge or overhang you have to pass under, there's probably a mine there).  But perhaps its most inexcusable flaw is the fact that you can get stuck behind scenery and unable to advance, forcing you to reset and lose all of your progress; in a game with levels this long and monotonous, that is simply inexcusable.  Commando came out on the NES the previous year and is a far better experience, so just play that one instead. 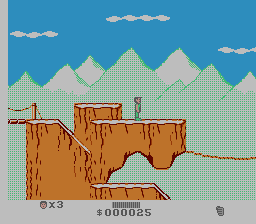 Yes, the date on that header is correct; this game really was released in 1993.  And yes, that screenshot is an accurate representation of this game's visual style.  You can probably already see one of my major gripes with this game.  Well, there's a lot more that can't be gleaned from just that.  Like the shrill random noise that's supposed to pass for music, the lousy collision detection that makes killing enemies a chore, and the fact that even from the very first stage of the games, the platforming requires pixel-perfect jumps or you'll likely fall down, hit spikes and die instantly.  In short, pretty much everything that can be done wrong in a platformer is done wrong here, and the fact that this game was released this late in the NES' lifespan and had several better games in the genre to draw inspiration from is simply shameful.  But I guess I can take some solace in the fact that, being a late release on the platform, nobody really played it either. 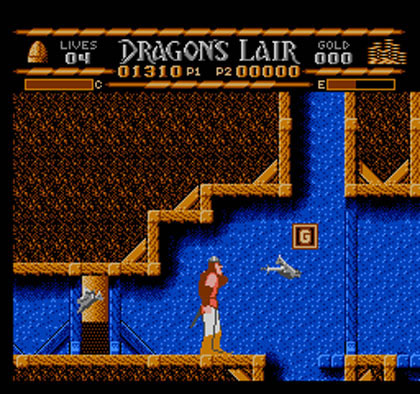 Another arcade hit in its day which the technology of home consoles simply wasn't up to the task of reproducing.  In the arcades, Dragon's Lair was an animated adventure that ran off of a laserdisc, having the player make choices and react quickly to on-screen hazards, and while it mostly came down to trial and error with a dash of random chance, the brilliant animation by Don Bluth made it an engrossing experience nonetheless.  So how do you convert that to the NES?  ...Well, you can't, really.  So instead MotiveSoft opted for more of a trial-and-error based platformer, having you avoid hazards, defeat enemies with thrown weapons and fight the occasional boss battle.  Which would be fine if it were well handled like, say, Out of This World, but they dropped the ball here by having the controls be extremely delayed - to the tune of you pressing a button, waiting almost a full second, and then your character responds.  That alone makes the game almost unbearable, but then you add in one-hit deaths from things as mundane as getting hit by a rock or touching a tiny spider, and you have a recipe for pure frustration.  Some fluid animation and large sprites for the NES can't save this one from being a miserable experience.

(And before I get a thousand e-mails about it: Yes, the PAL version does have a much higher framerate and more responsive controls.) 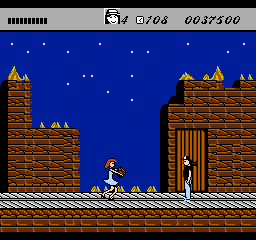 Our third entry on this page from Radical Entertainment, and once again, it's a late NES release that completely squanders a perfectly good license.  ...Granted, I don't know what a good video game based on Wayne's World might look like, but I can guess that it wouldn't look anything like this.  A platformer with drab graphics and bad music, with levels simply littered in TVs and signs reading "No way!" and "Way!" just to remind you in the laziest way possible that this is a Wayne's World game.  That's bad enough, but then come the stages where you have to play as Wayne and kill things with his terrible kick that has a ridiculously small window to damage enemies and takes roughly a quarter of a second to start up, meaning every single attack you throw has to be perfectly timed or you take damage (and likely die since enemies tend to swarm you).  There was clearly no thought behind this game's design at all - it's just another bad licensed game churned by the lowest bidder to make a quick buck. 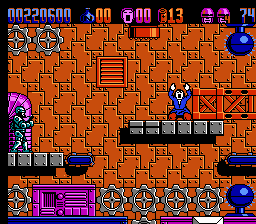 Another title brought to us by Painting by Numbers and published by Ocean, and once again, it's a rotten experience.  The original Robocop on NES was no masterpiece, but it was at least playable, if extremely difficult, and stayed relatively true to its source material.  No such luck here, as Robocop 2 is another lousy platformer with all the hallmarks of bad PbN/Ocean games - Gaudy visuals, uninspired levels and frustrating gameplay compounded by awful physics.  You move as if every platform is covered in grease, and  Robocop himself has some of the most awkward momentum I've seen in any video game - he moves at a snail's pace for roughly half a second, then suddenly gains a burst of momentum, causing him to move twice as fast and jump twice as far.  And yes, you will need to master this in order to get past even the first stage.  But worst of all, this game is the worst kind of tedious scavenger-hunt bullshit, having you find a quota of illegal Nuke in each stage (much of which is often hidden in secret areas), and if you fail to do so more than twice in a single playthrough, it's game over and you get to start from the beginning.  Did I mention you can't scroll the screen left either, so there's no backtracking to go find any you may have missed?  ...Yeah.   Simply and inexcusably terrible.  Take a cue from how bad the movie was and avoid this stinker.

Lucasarts was big in the 90s, bringing us many iconic adventure titles that continue to be regarded as classics to this day (including Maniac Mansion, one of my all time favorites in the genre).  Among their failed experiments, though, was Defenders of Dynatron City.  Clearly intended to become a media franchise, the game starred a team of six original superheroes defending Dynatron City from the evil Dr. Mayhem, even spawning a cartoon pilot and a six issue comic book series.  However, it stalled and died due to the game quite frankly sucking out loud.  It's a repetitive affair of walking from screen to screen fighting repetitive waves of enemies, with poor hit detection making destroying them far more of a chore than it really should be.  Once a screen's cleared, you just walk out an exit and onto another portion of the map to repeat the process all over again, and that's pretty much the entire game - no variety and hell, not even a two-player mode, which is a key part of these kind of beat-em-up adventures.  The only highlights were the eye for detail in the city backgrounds and the fact that your characters could pick up and hurl cars around to clobber enemies, which is a nice touch for a superhero game. 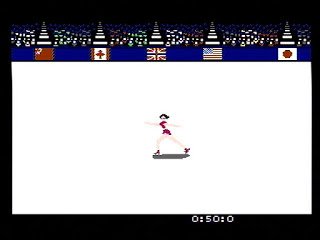 Winter Games was quite a popular game on various computer platforms, featuring impressive graphics, smooth animation and having a fair bit of variety with multiple events to play (which varied from version to version).  When it finally got made for the NES, though, all the magic was gone.  The animation was choppier, the smooth controls were gone, and the music was downright wretched, taking several recognizable tunes and making them screechy and tinny-sounding.  Hell, even the Atari 2600 version was better than this - it had twice as many events as the NES port did, and all of them looked and played better!  That's just sad, man.  At least the NES versions of California Games and World Games fared considerably better; they actually got two competent developers (Milton Bradley and Rare) to work on those, so they look, sound and play a lot nicer than Winter Games.
Previous - Next