We depart Moonshade and, after a long trip through Furnace, end up back next to Monitor, where we finally decide to complete that whole "stopping the goblins" quest we started a while back. 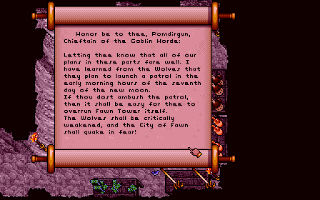 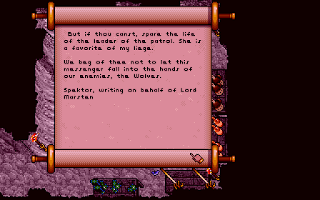 I overlooked the other scroll on the table in the Goblins' hoard.  It contains a second letter implicating Spektor.  If you show both to Caladin or Brendann, they'll both be jailed.  If you're missing one or the other when you show him the evidence, though, you won't get a second chance!

This also allows you to talk to Marsden and Spektor in jail, then to Lucilla, who will point you to a secret stash and give you a key. 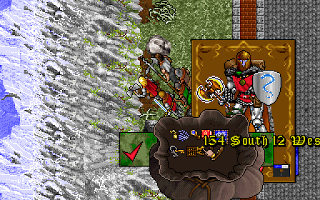 Enter a fake wall here and you'll find a cache with several powder kegs and four locked chests that contain some cash and gems (as well as Cantra's deceased father). 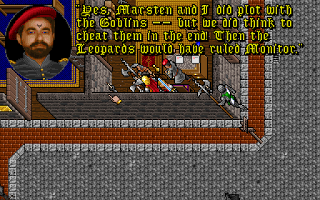 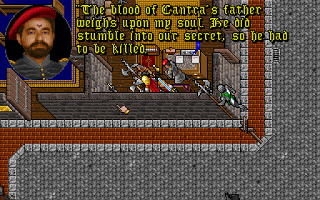 You can also get a confession from Spektor if you kill him while he's out of jail, but this doesn't seem to trigger the plot flag that causes Lucilla to give you the key...

And for a few other things I missed: 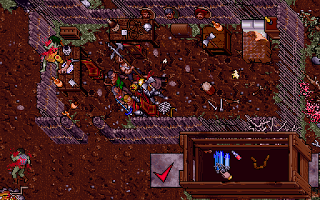 Pomdirgun's house has our missing Burst Arrows, so we can finally ditch that hairbrush we've been carrying around for the better part of the game. 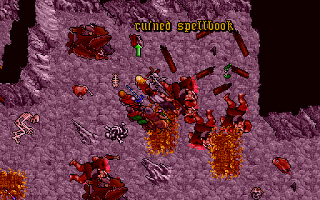 And our missing spellbook is just northwest of the bridge to the Monitor cave path in Furnace.  As that dungeon is a fiery inferno, though, it's now quite unusable.  Not that we need it anymore after our trip to Moonshade, but it's at least a bit of closure.

(Double clicking on it causes it to be hit by lightning and explode, by the way) 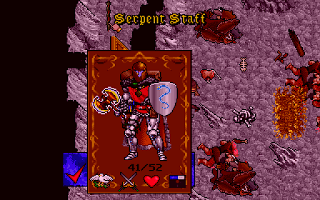 Much more vitally though, one of the trolls in this room has a key.  Behind a nearby locked door is another of the Serpent Items, the Serpent Staff.  This is absolutely necessary to finish the game, so don't forget to grab it! 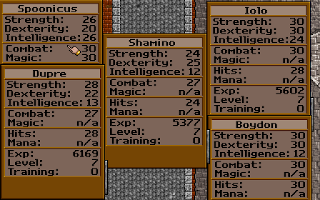 Oh, and I did some training off-camera because we haven't had an opportunity to do that in a while.  As you can see, our party is now quite beastly.

Finally, I went ahead and got the few spells Ensorcio has that no other mage carries - namely Great Douse, Sleep and Fire Ring.  That all but fills out our spellbook, save for three slots (which will all be provided to us as the plot dictates).

(You will have to talk to Ensorcio quite a bit to get him to offer you spells.  Click on the various options until Moonshade comes up, then click storms, Batlin, thugs, mentor and spells.  He accepts Guilders or gold coins, so be sure to bring some of those too.) 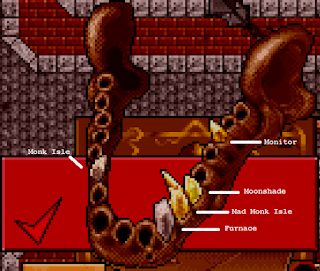