We visit the destroyed island of Skara Brae and get a bit more than we bargained for...

There's a hidden secret in Skara Brae to point out.  Head to the graveyard, specifically the statue just west of the crypt.  On the left side of the statue you'll be able to just barely spot a switch... 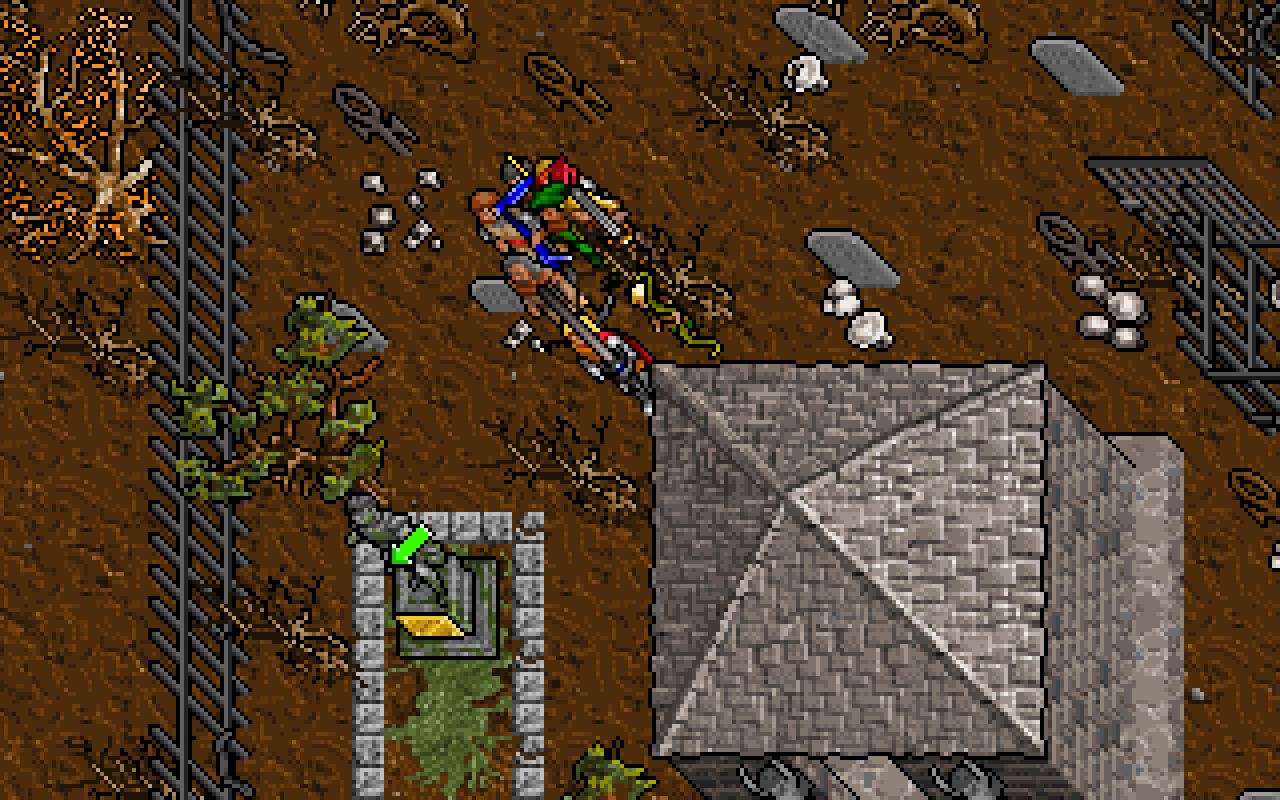 Flip that switch and a door will open in the side of the crypt, revealing naught but a nightstand.  Inside, however... 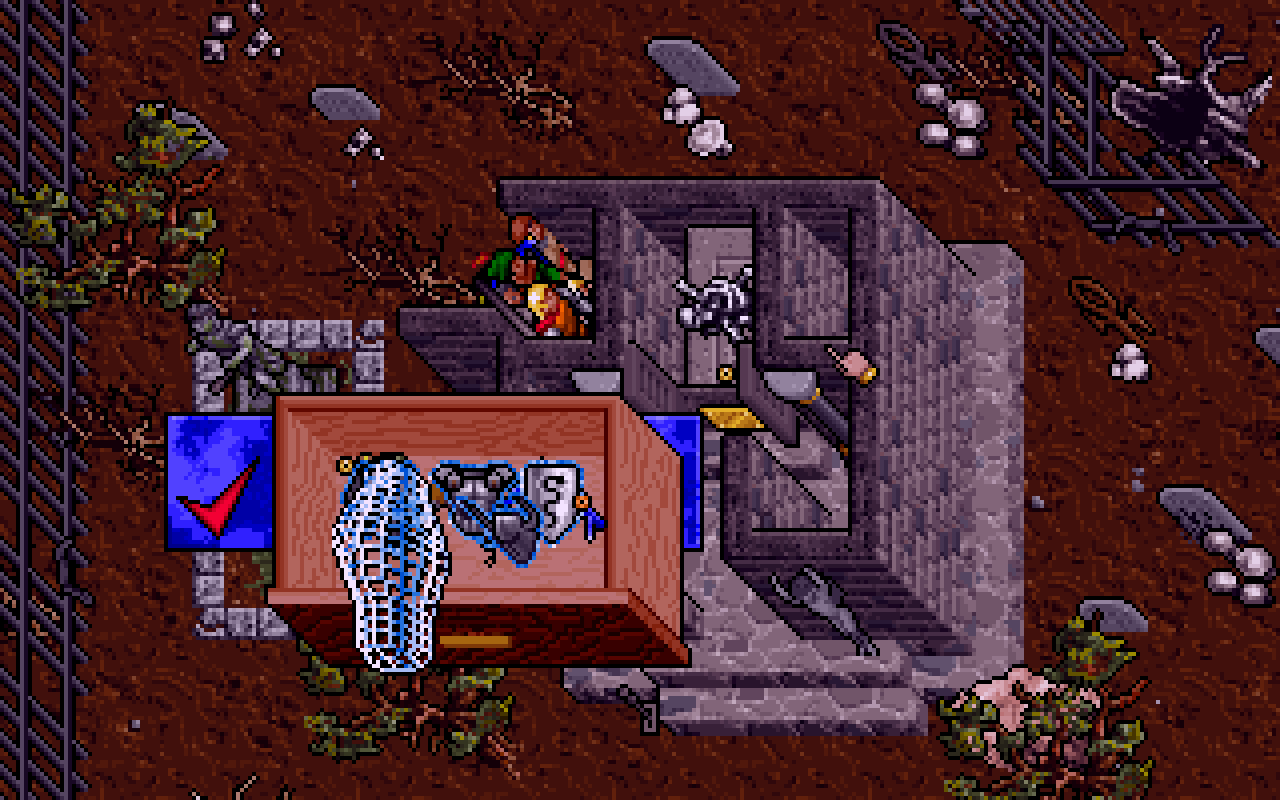 ...You will locate several magical rings, a Death Scythe, and a full set of magic armor, as well as several plot-relevant items for Skara Brae.  Namely the Soul Cage, Rowena's wedding ring and the fully-mixed potion you need to destroy Horance the Lich. Using these messes up the plot sequence and can potentially disrupt some story flags, hence why I didn't show it off during the video.  Definitely worth burgling once you've completed the story events in Skara Brae though.  (If you don't have the Forge of Virtue add-on or simply choose not to complete it, the Death Scythe makes a fine weapon for the Avatar!)


We'll do New Magincia's lone sidequest too.  Might as well since we never really visit there again. 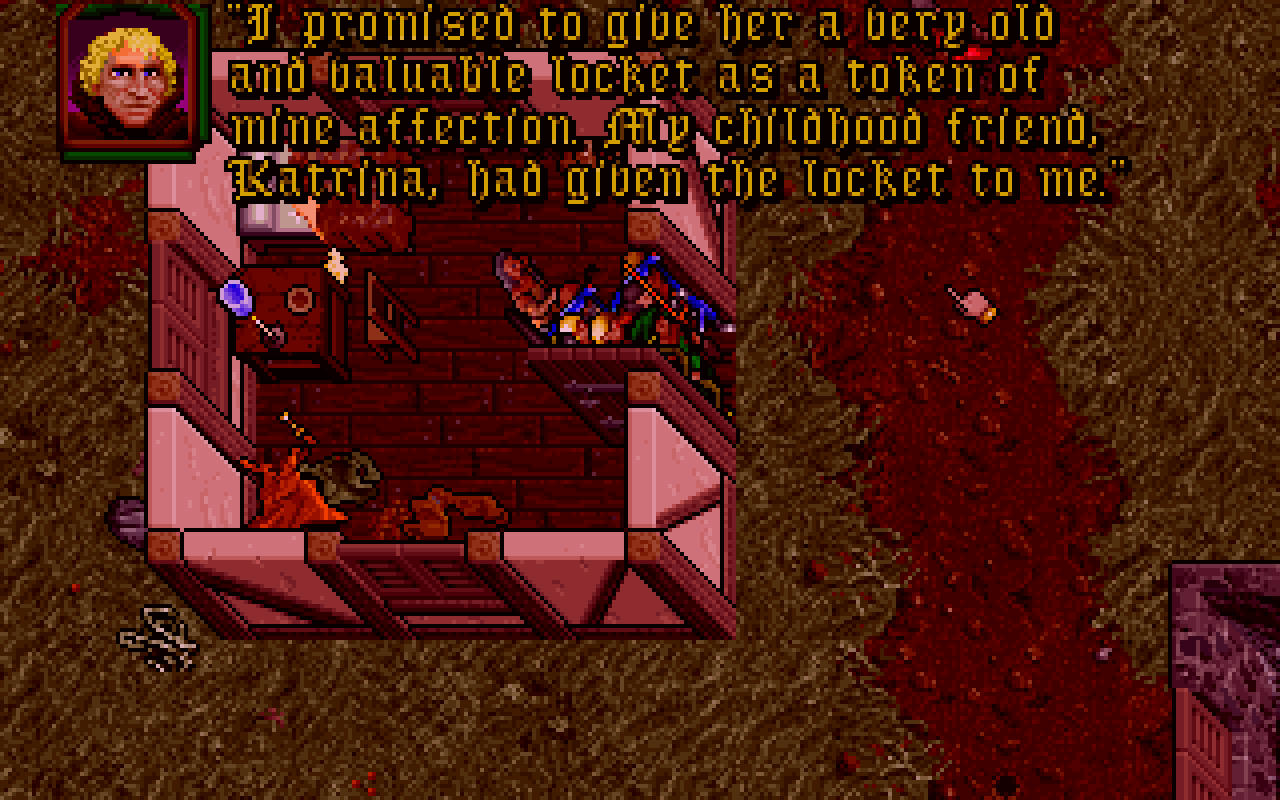 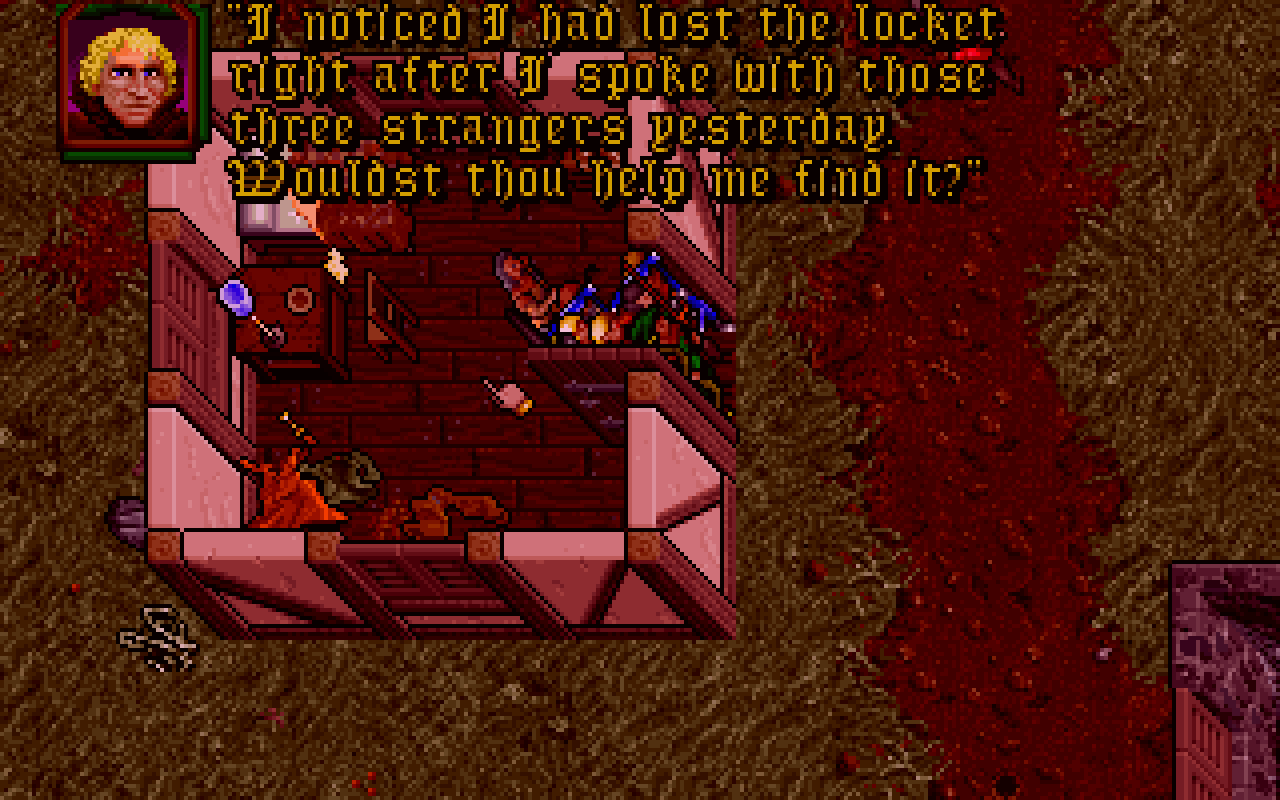 Speak to Henry in his house on the south end of town to learn that he has lost a locket he wanted to give to Constance.  He gives us a clue, saying that he remembers having it until he spoke to "three strangers." 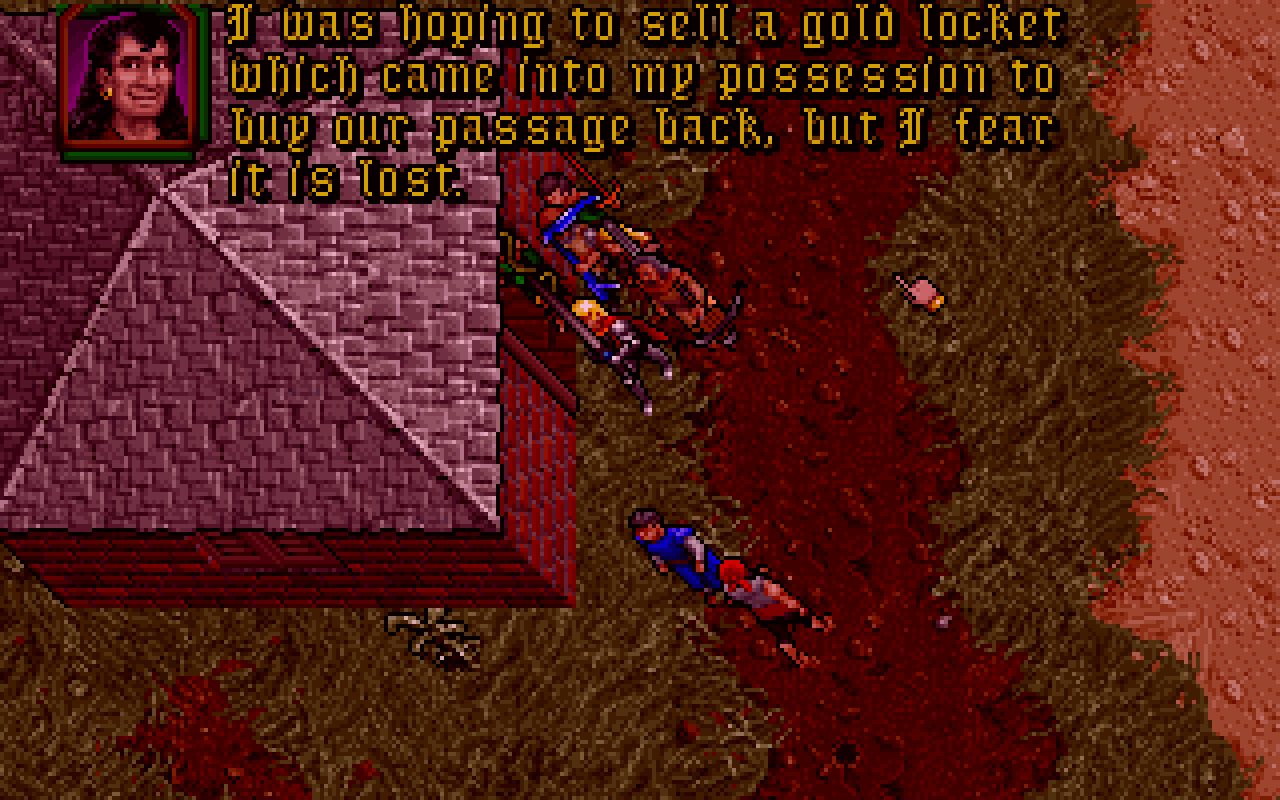 Wouldn't you know it, the three strangers he speaks of are three pirates who have been stranded here since their ship wrecked (its maker was our old friend Owen).  They usually hang out just north of Henry's house.  Speak to their leader, Robin, and he'll mention that he came across a locket, but misplaced it.  Speak to his comrade Battles to learn that the last time he saw it was at the local pub, the Modest Damsel. 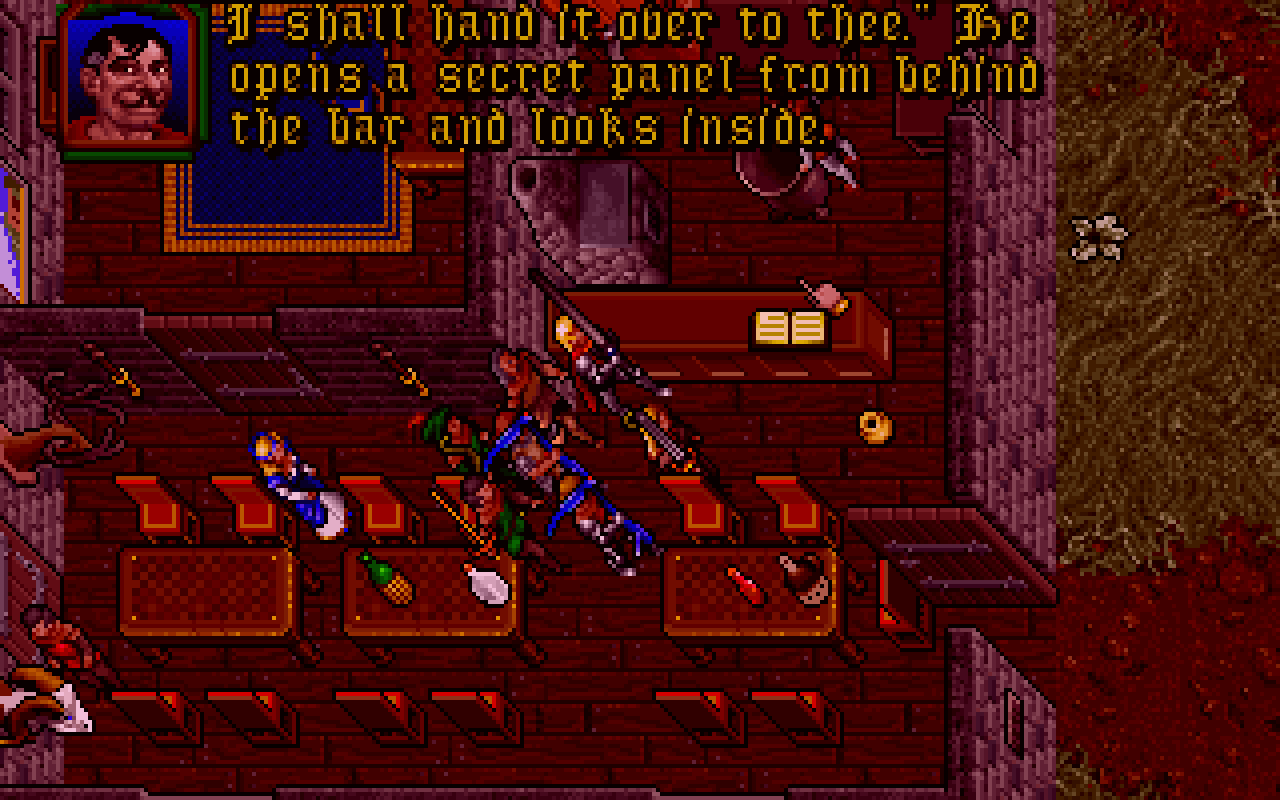 Visit the pub and speak to Boris about the locket (you may have to pay off Dupre's tab first).  He confesses to having taken the locket, but finds it missing from his hiding place in the bar.  Ask his wife, Magnenta, about it, and tell her the story.  She will return it to you.  Now you can return it to Henry for 25 experience and his gratitude (and if Constance is onscreen at the time, some reconciliation between them). 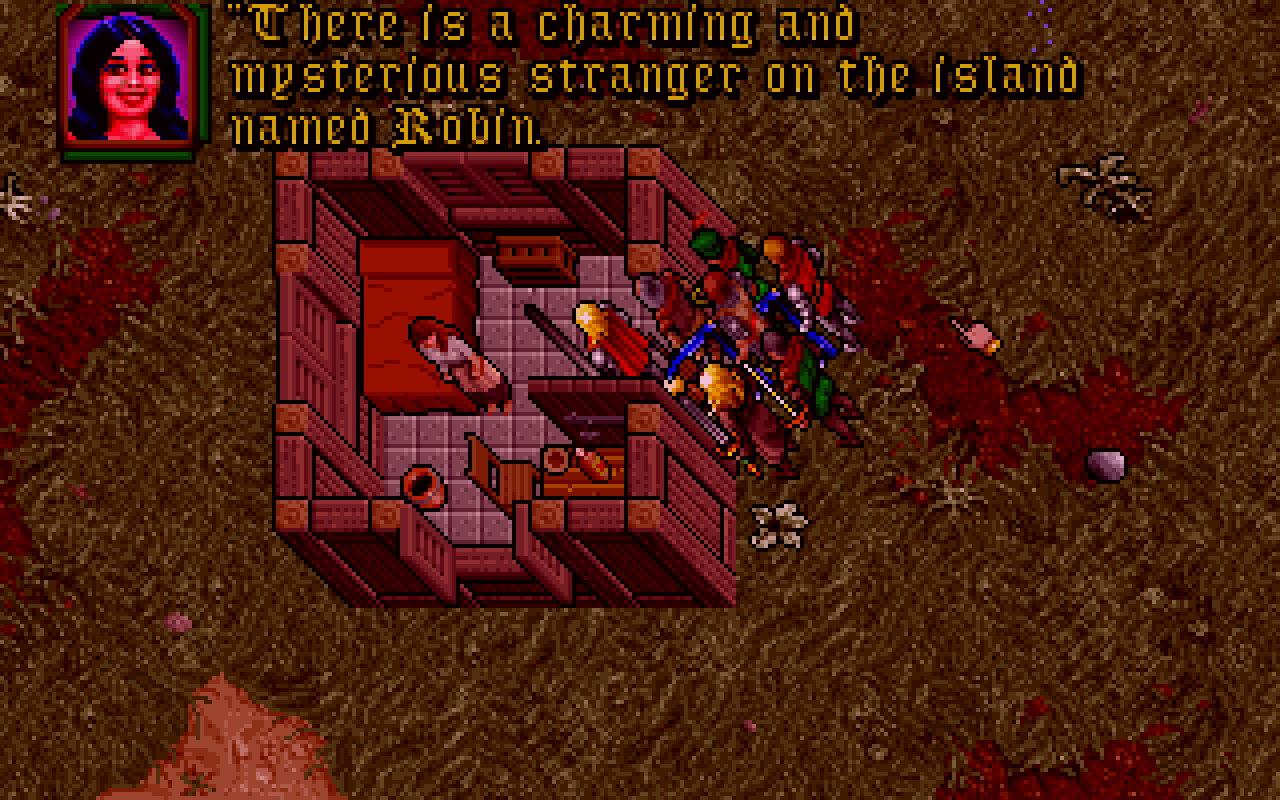 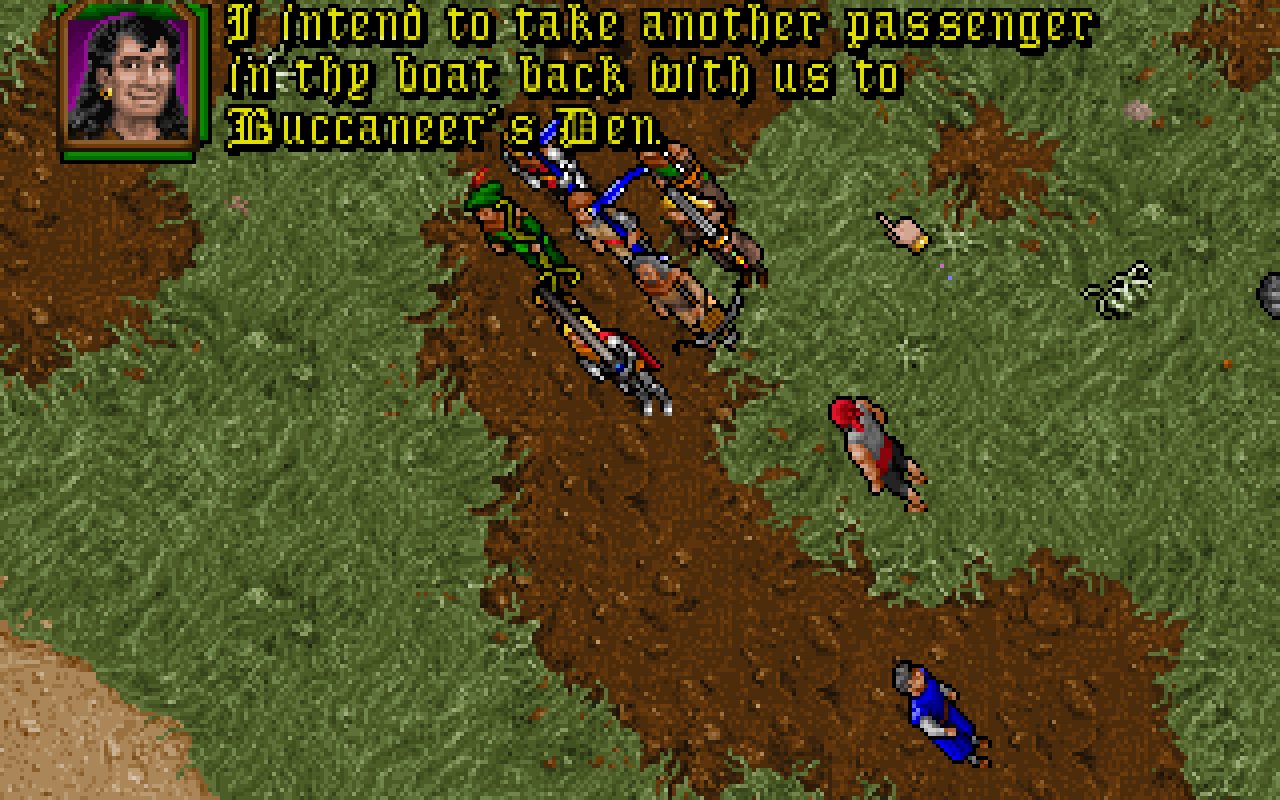 Speaking to Robin after getting the locket back (but before returning it to Henry) reveals a more sinister plot on his part - he had stolen the locket in an attempt to win over Constance so that he could sell her as a slave once he returned to Buccaneer's Den.  He'll try to threaten you into giving him your ship after revealing this; refuse and he and his men will attack you.

(Incidentally, if you agree to ferry him to Buccaneer's Den, he'll try to murder you anyway, so the end result is the same.)


Serpent's Hold also has two quests for us to undertake. 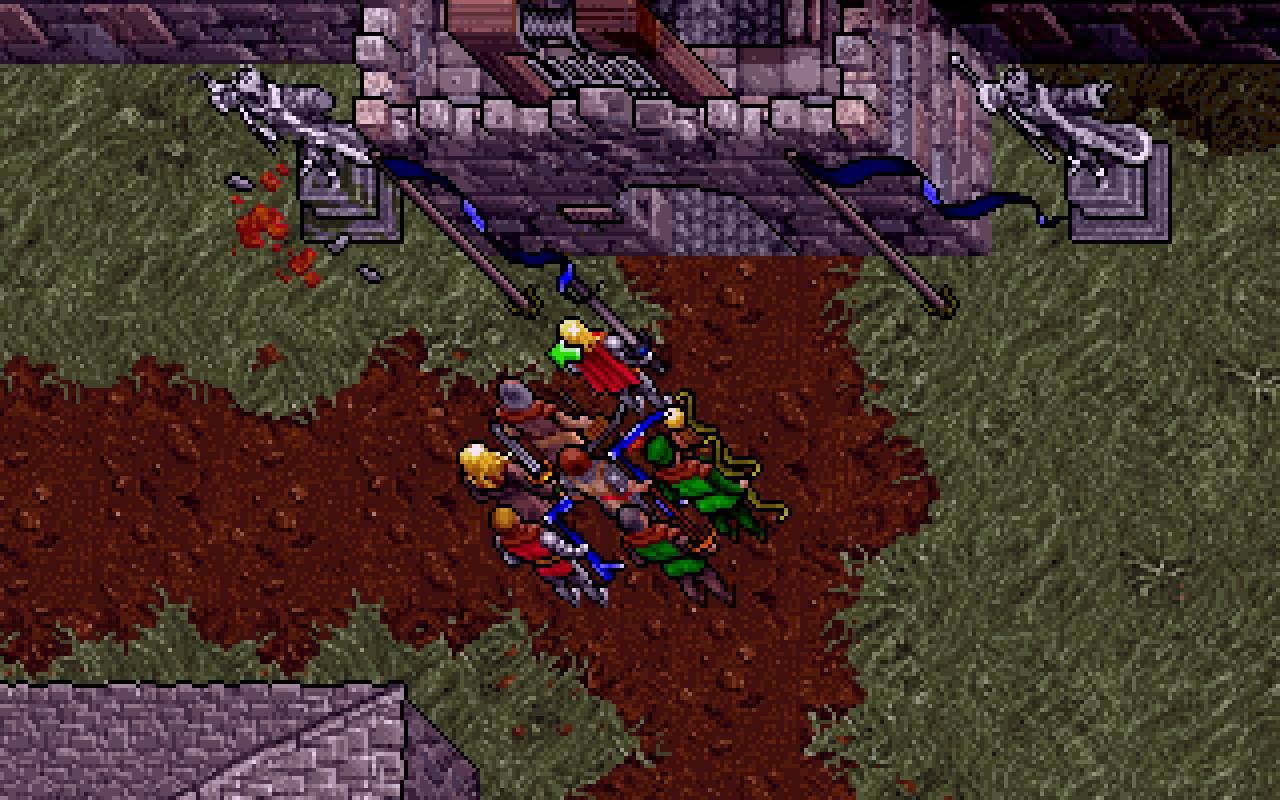 You may have noticed that one of the statues outside of the Hold has been defaced.  Talk to Lord John Paul about it and agree to search for the vandal.  He'll point you toward Denton, so be sure to speak to him first.  Then talk to Richter to get some stone chips, and talk to Leigh to discover that the chips to discover that the blood on them is gargoyle blood. 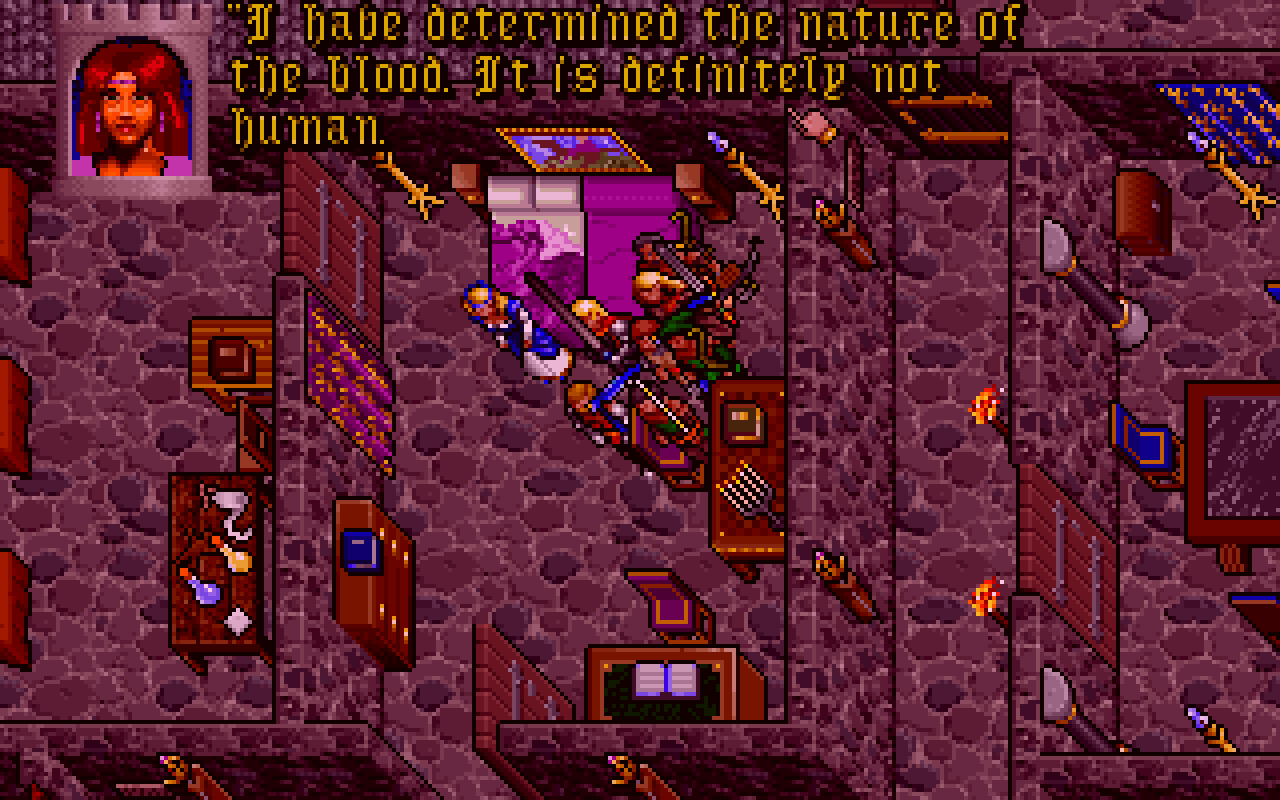 That points us to Horffe (the only Gargoyle on the island), who claims that he was injured protecting the statue from the vandal.  Next, speak to Lady Tory (who will have another quest for you, but we'll get to that shortly).  She'll tell you to speak to Sir Jordan. 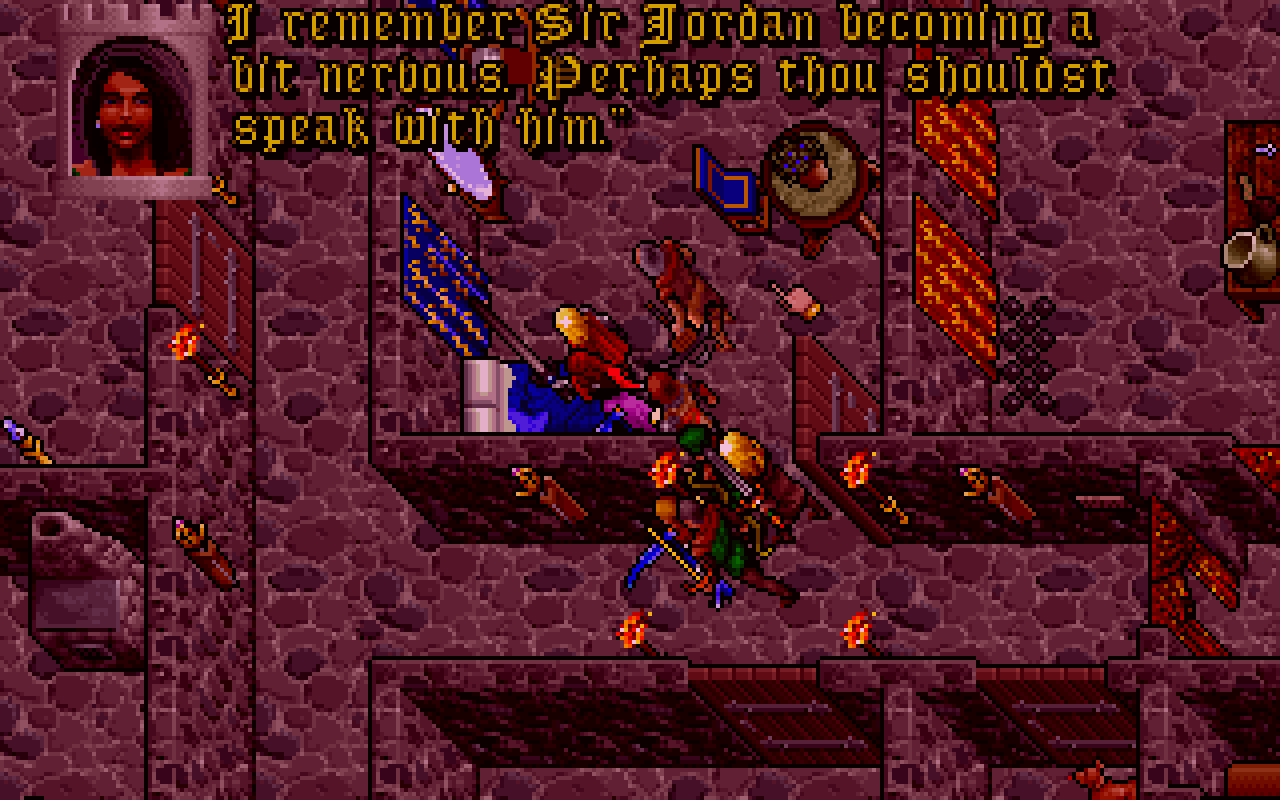 Jordan claims he heard a woman's scream during the night in question, believing it to be Lady Jehanne.  Speak to her to finally figure out who the culprit is. 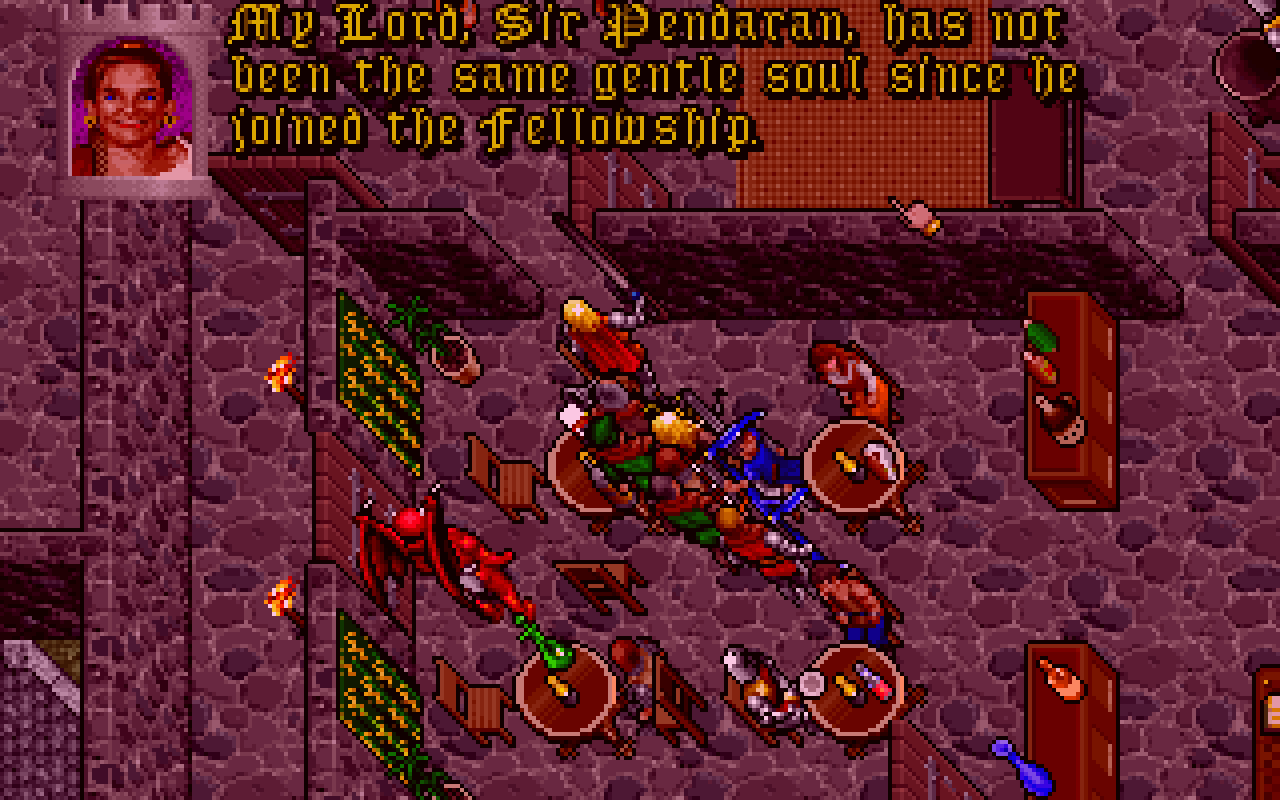 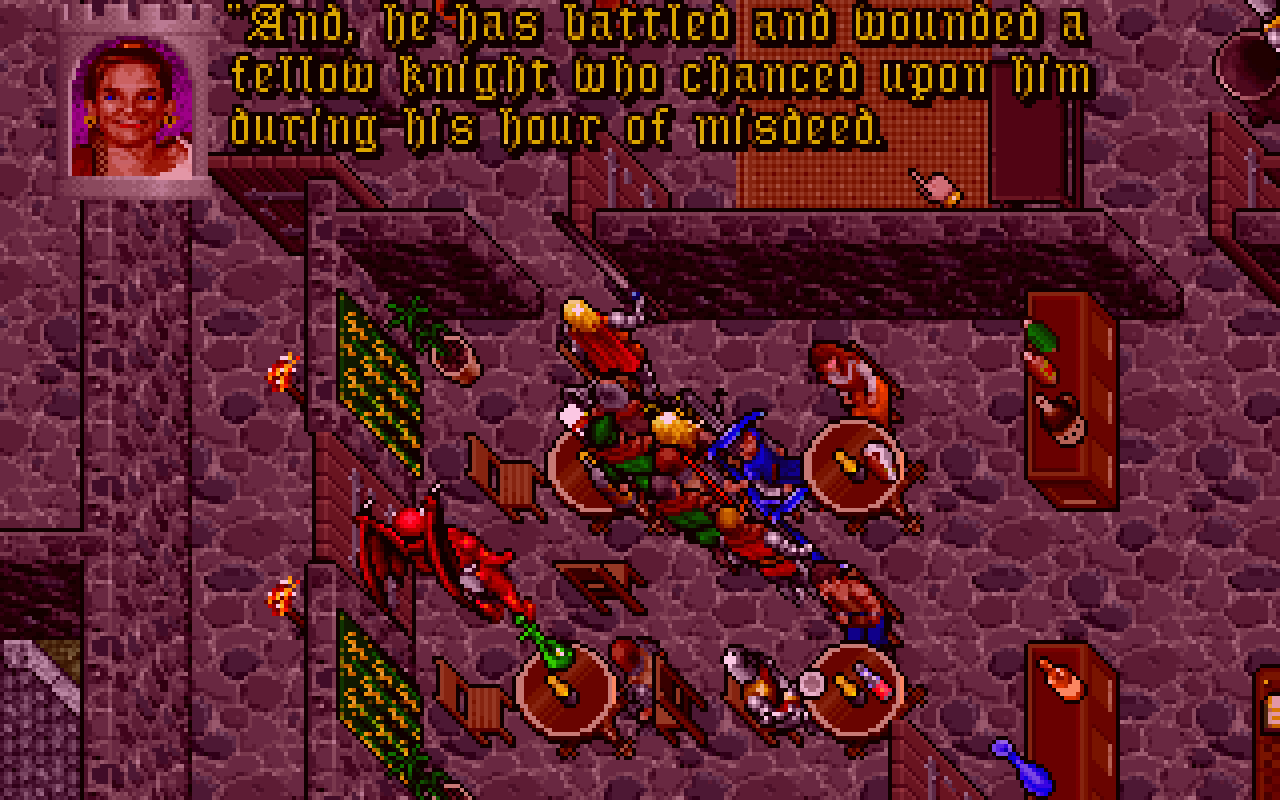 Finally, speak to Pendaran and he will confess, then report back to John Paul for 50 experience and his gratitude. 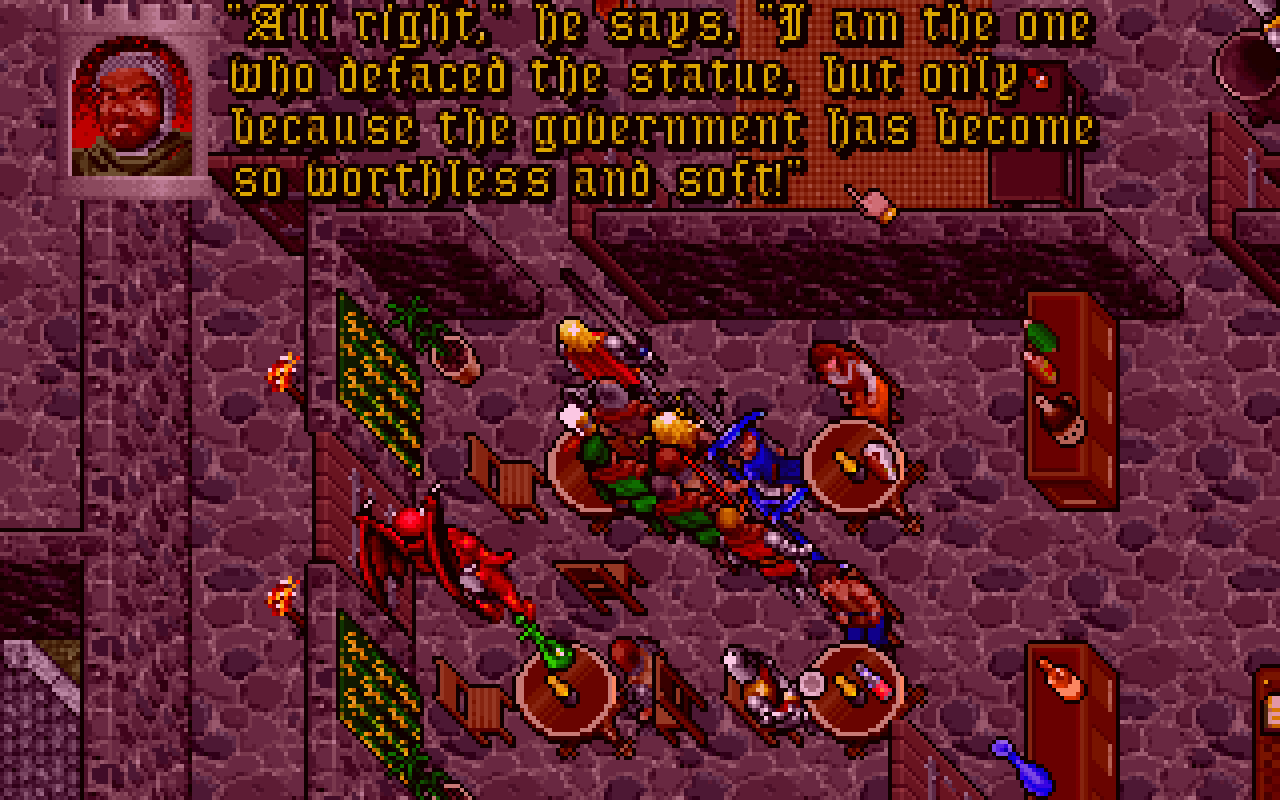 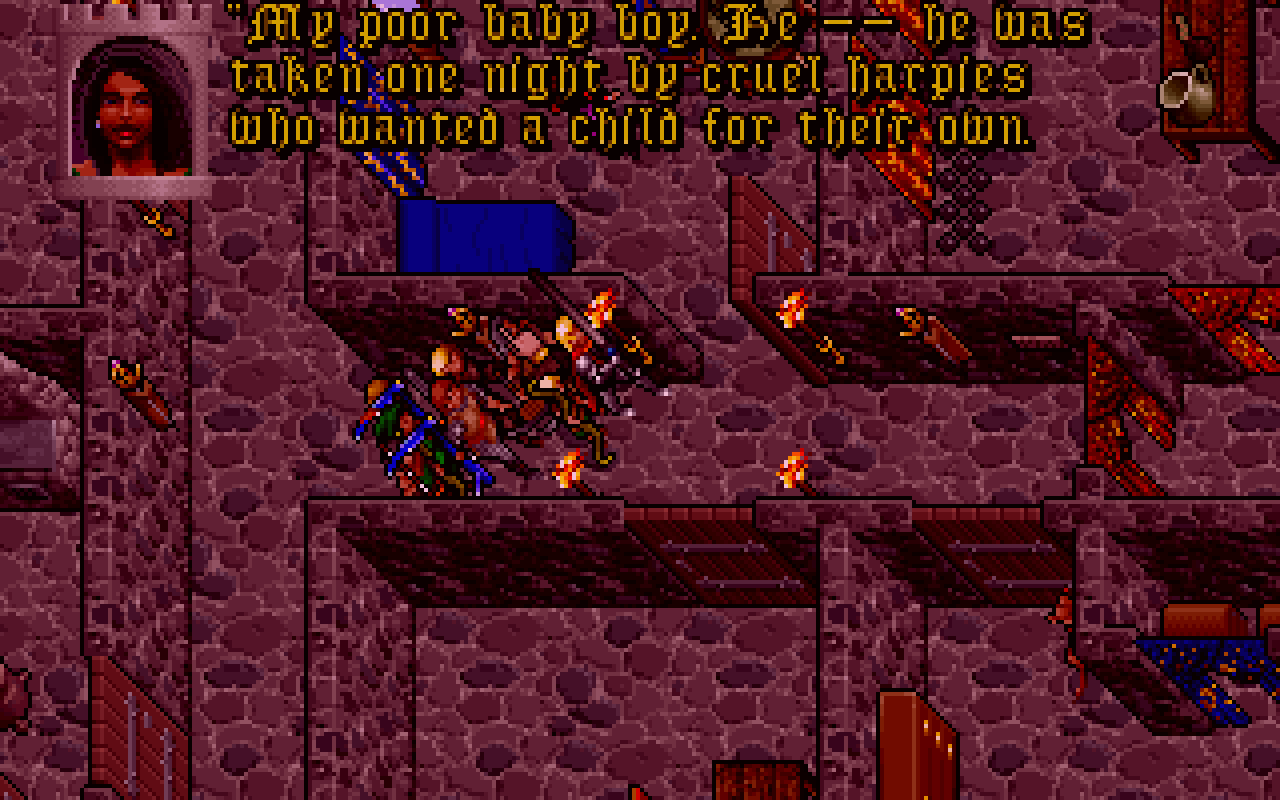 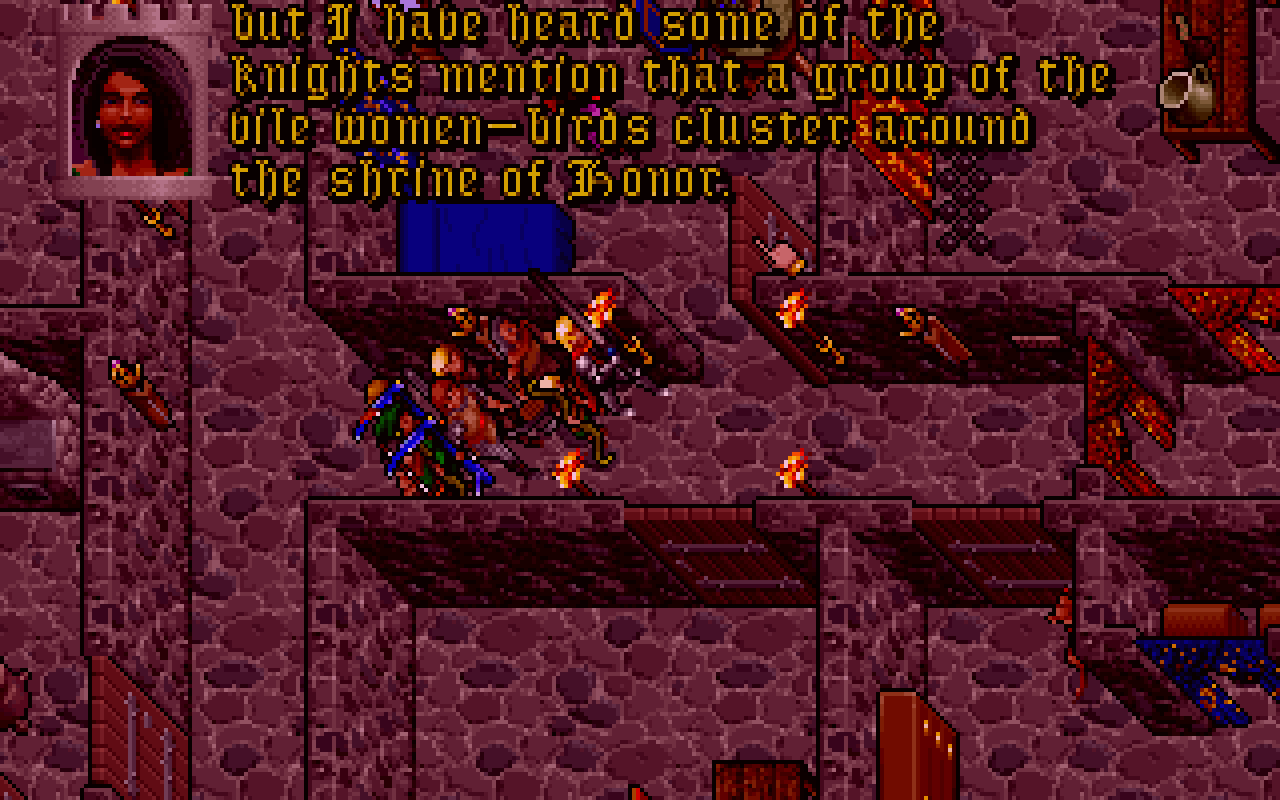 Lady Tory has another quest for you as well.  Her child Riky was stolen from her by harpies who have made off for the Shrine of Honor.  Teleport to Trinsic, seek them out (at coordinates 151 South by 9 West) and slay them, then return Riky to Tory for 25 exp and her gratitude. 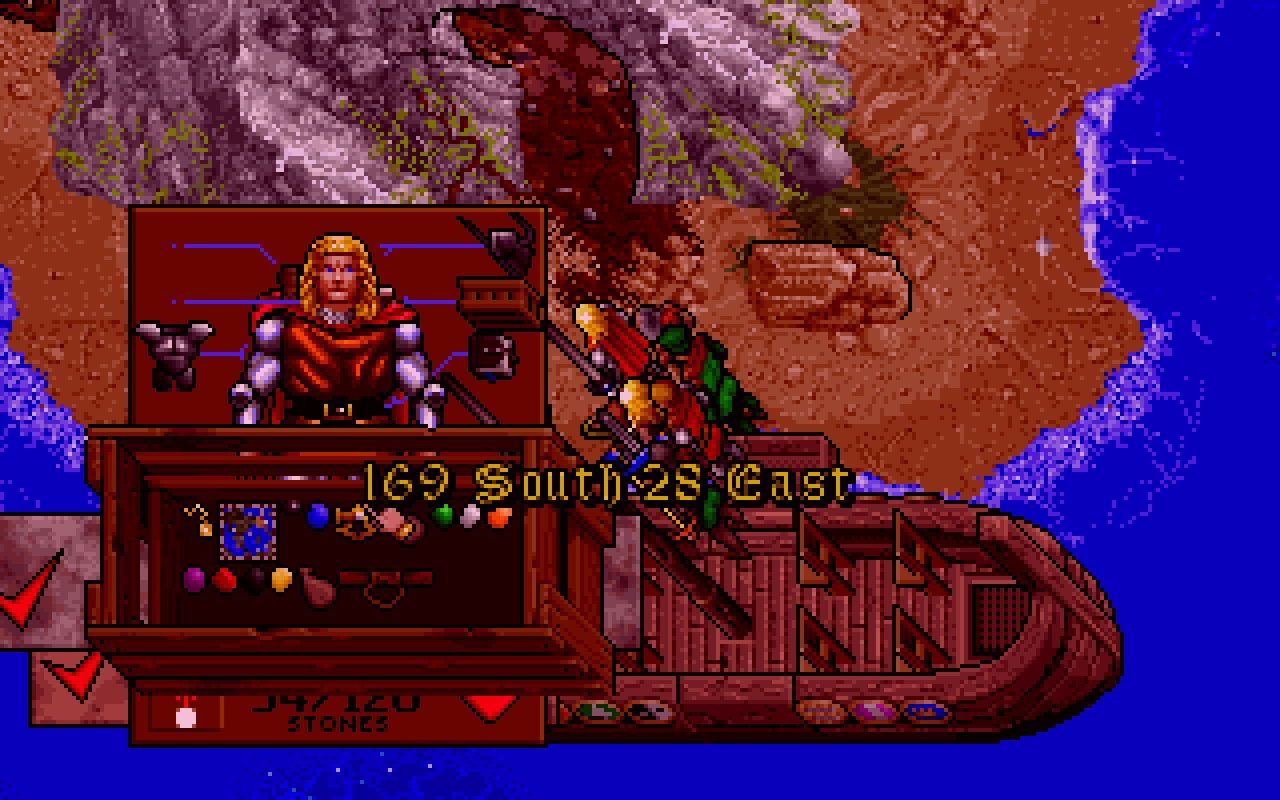 Remember those coordinates the parrots mention when you whack them with a gavel?  Following them will put you at a small island just off the northwest coast of Serpent's Hold which contains quite a bit of neat swag.  This includes about 500 gold coins, a Lightning Whip, some magic rings, boots and gauntlets, as well as some gold bars, serpent venom and two glass swords.  Not bad at all!

(Note that the invisible caltrops just inside the entrance are marked as "owned" property, so your comrades will complain about you moving them and may leave if you fiddle with them too much.  Of course, you can always just set them in your backpack first to make them "your" property and then move them around as much as you like...)


You may also be asking about two very prominent locks in Serpent's Hold - Namely a mysterious locked chest in the meeting hall and the door to the armory that contains several awesome magical weapons. 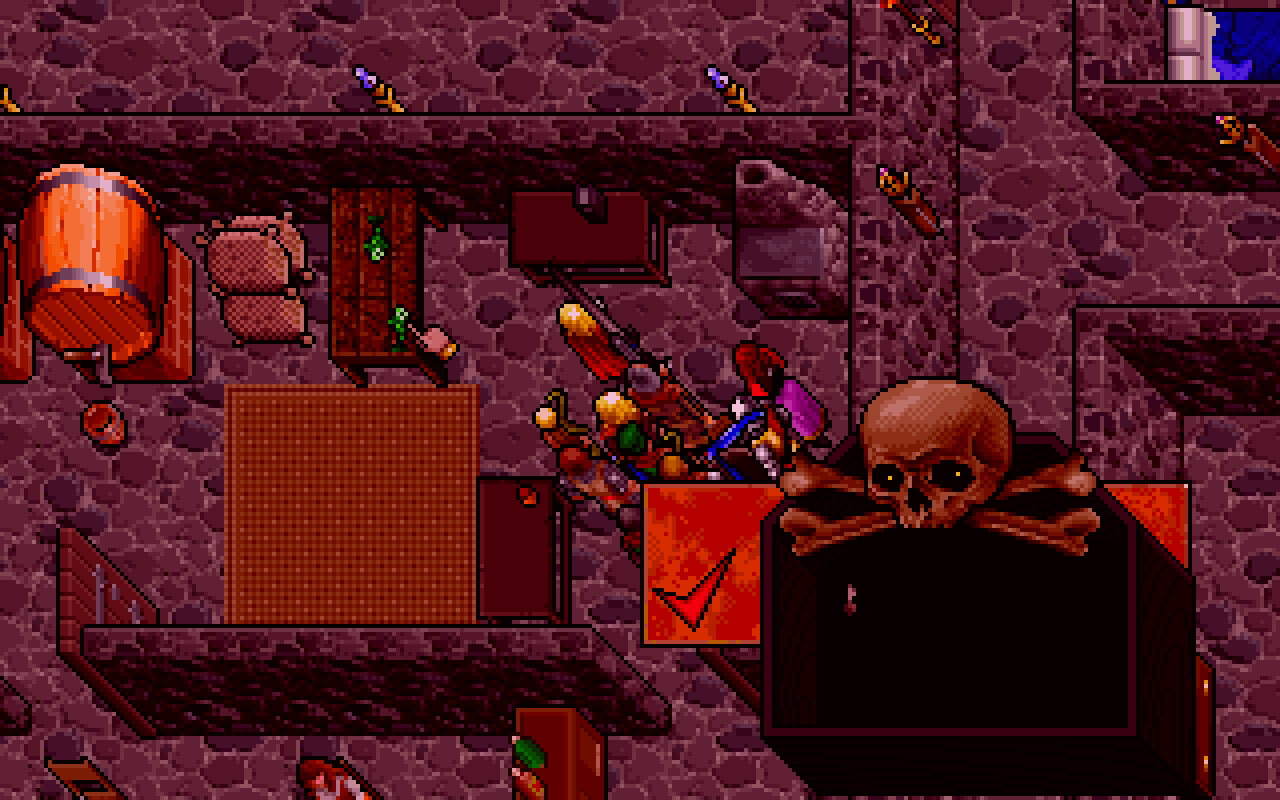 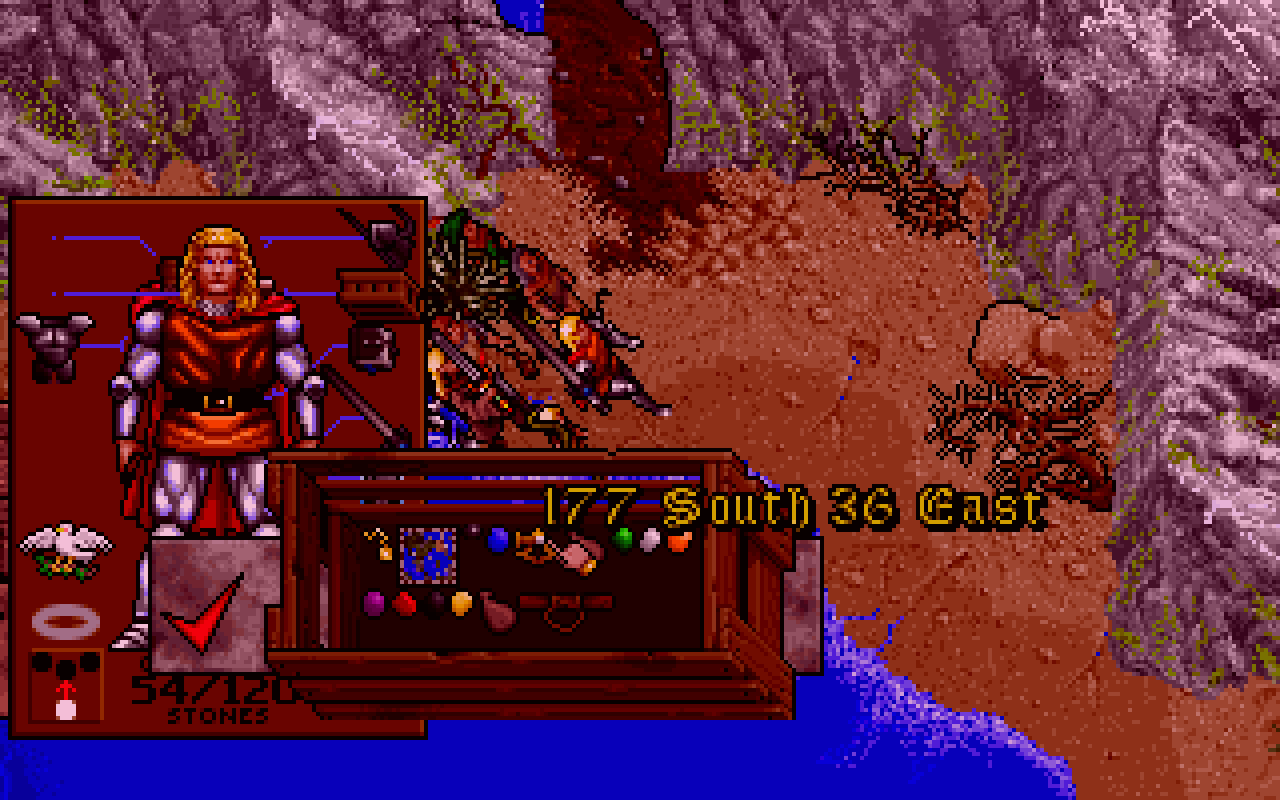 For the armory door, search the up-facing fish in the kitchen (it will read "body" when you click it) to find a key.  Take this key to coordinates 177 South by 36 East to locate a cave (it's on the south end of Serpent's Hold, but you need a ship to reach it).  Follow the linear path around the lake inside to find two dead bodies and a chest.  Unlock that chest with the key you found to find another key. 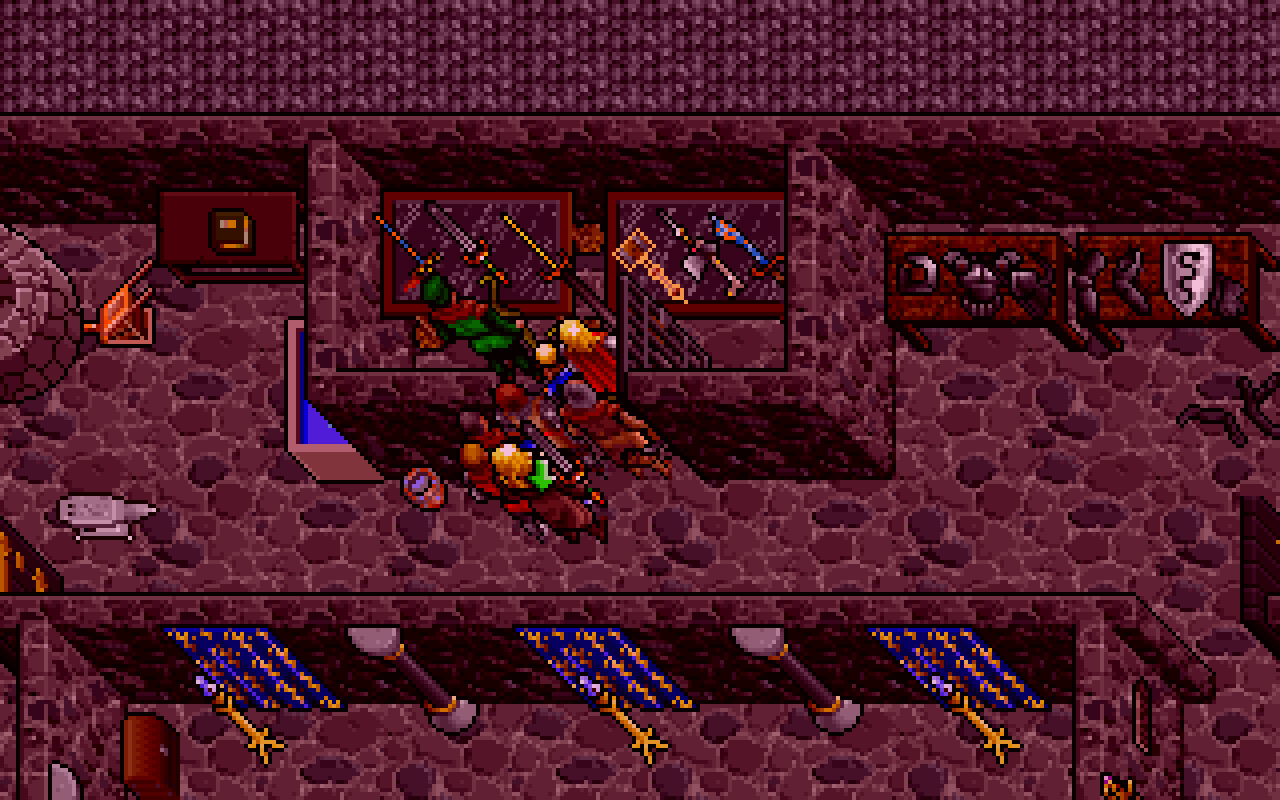 Now you can return to the armory and help yourself to those weapons if you're feeling unvirtuous today (the Magebane in particular is quite handy against magically inclined enemies, and the Juggernaut Hammer is a powerful ranged weapon).

As for the chest in the meeting hall, travel to 48 North by 138 East (far northeast of Vesper) to find a big "X" with a chest in the middle (and two glass swords nearby). 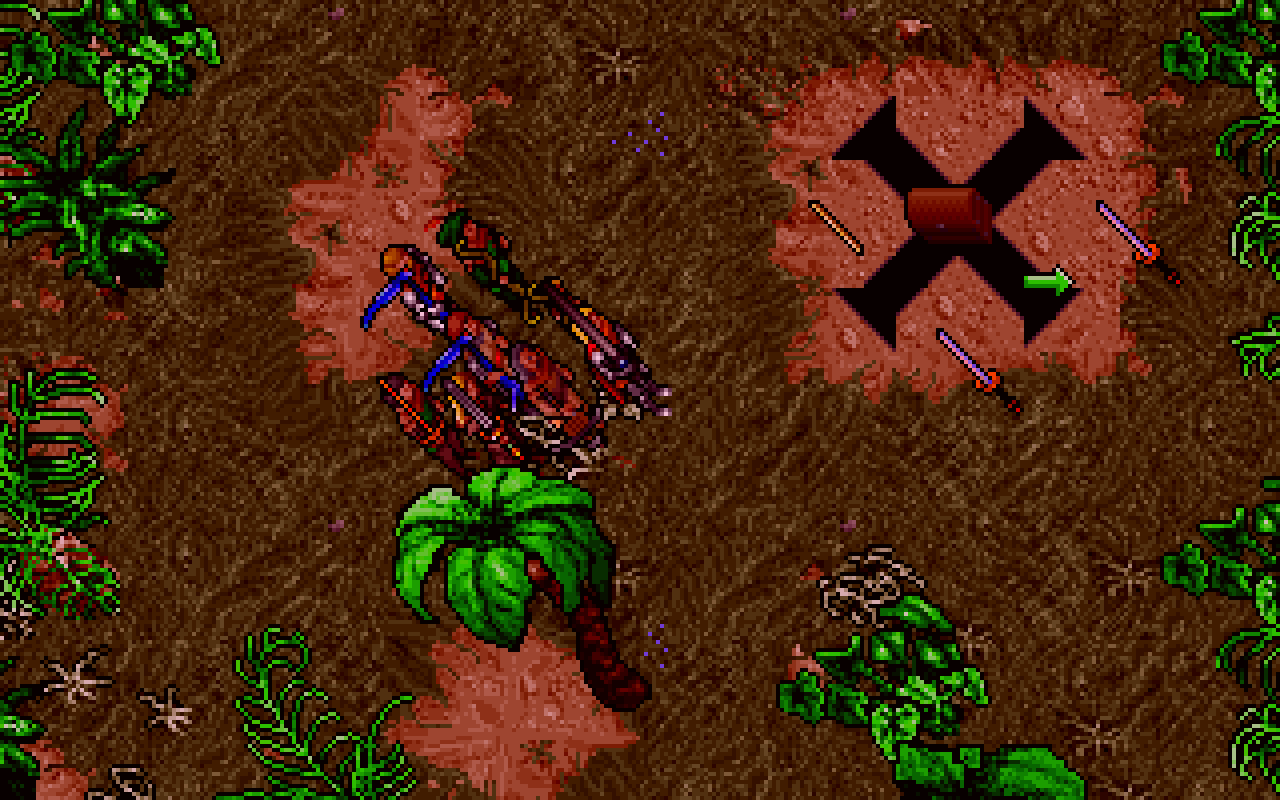 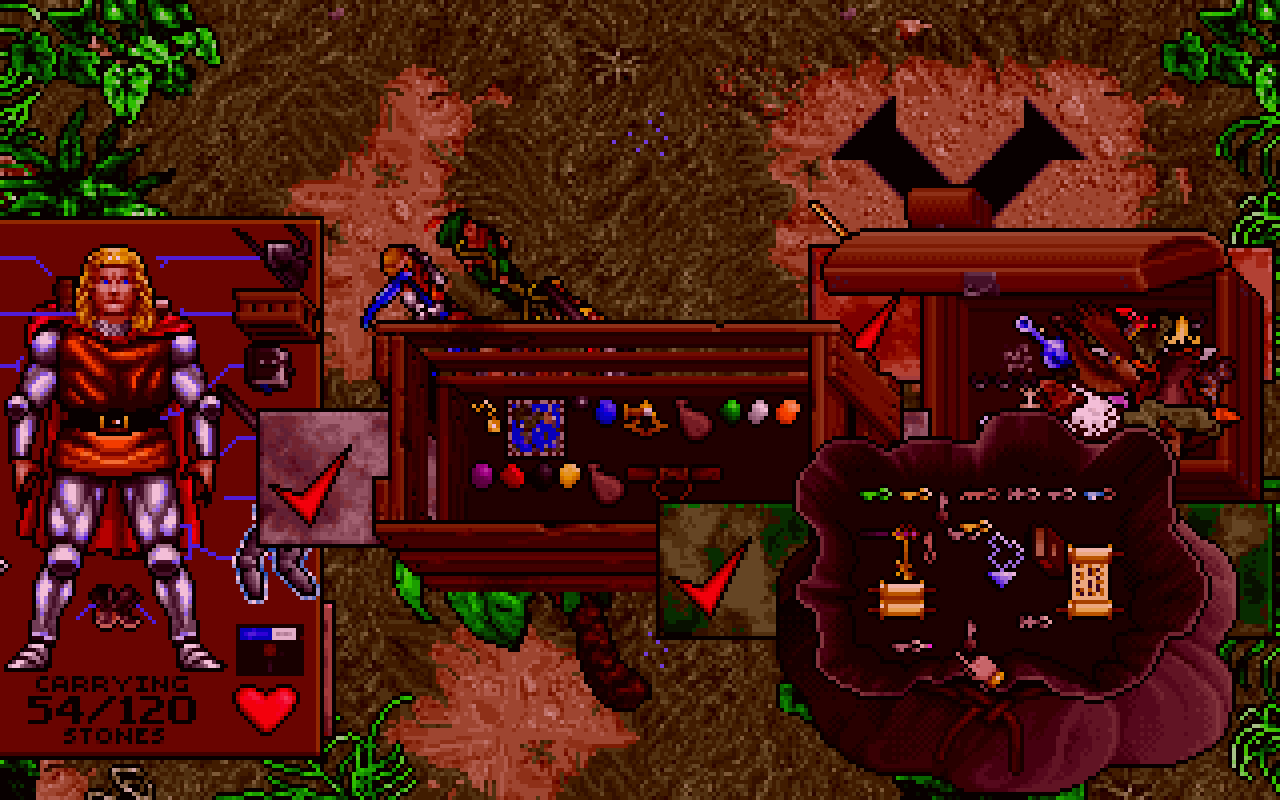 (If you're wondering what the Guardian is saying when you get here, it's "I am the Pagan Lord!" played backwards.)

Root through all the garbage to find the key, then take it back to Serpent's Hold and unlock the chest to find... 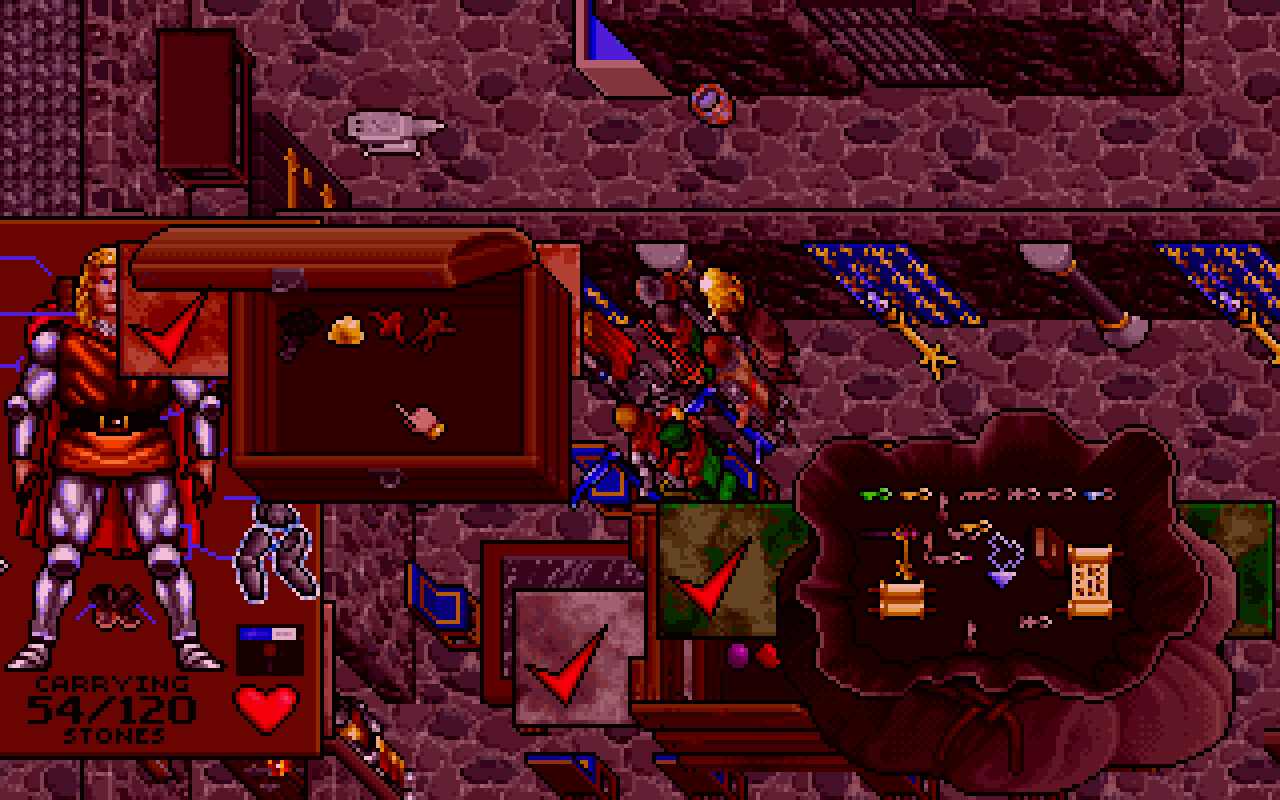 ...A small handful of spellcasting reagents.  Well, that's a disappointing payoff to such an obscure puzzle. 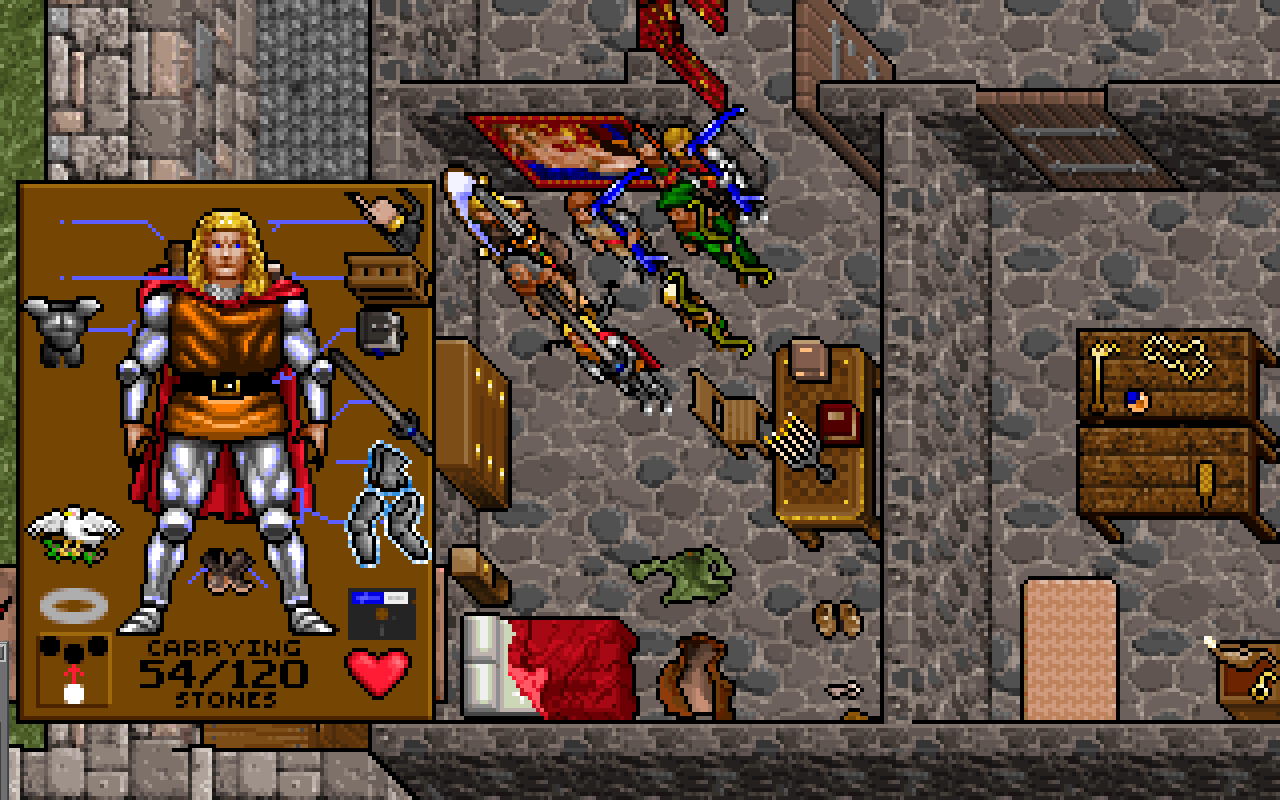 There is also another key buried under some clothes in a west room of Serpent's Hold, but I have no idea what (if anything) it unlocks...


On the way to finding the X, you may also discover a small fort with some continually respawning pirates.  (You may also get put here if you take a wrong teleporter in Dungeon Despise.) Inside is a locked chest. The key can be found under a bucket on the shore just east of the hut here.  Inside is some gold and lockpicks.  Not much, but it's something.