Fun in a jet addicted little mining town.  Well, not really, but let's say it is.

Some stuff I overlooked and some other things I did off-camera to spare you from the tedium of watching me travel all over the map to tie up loose ends. 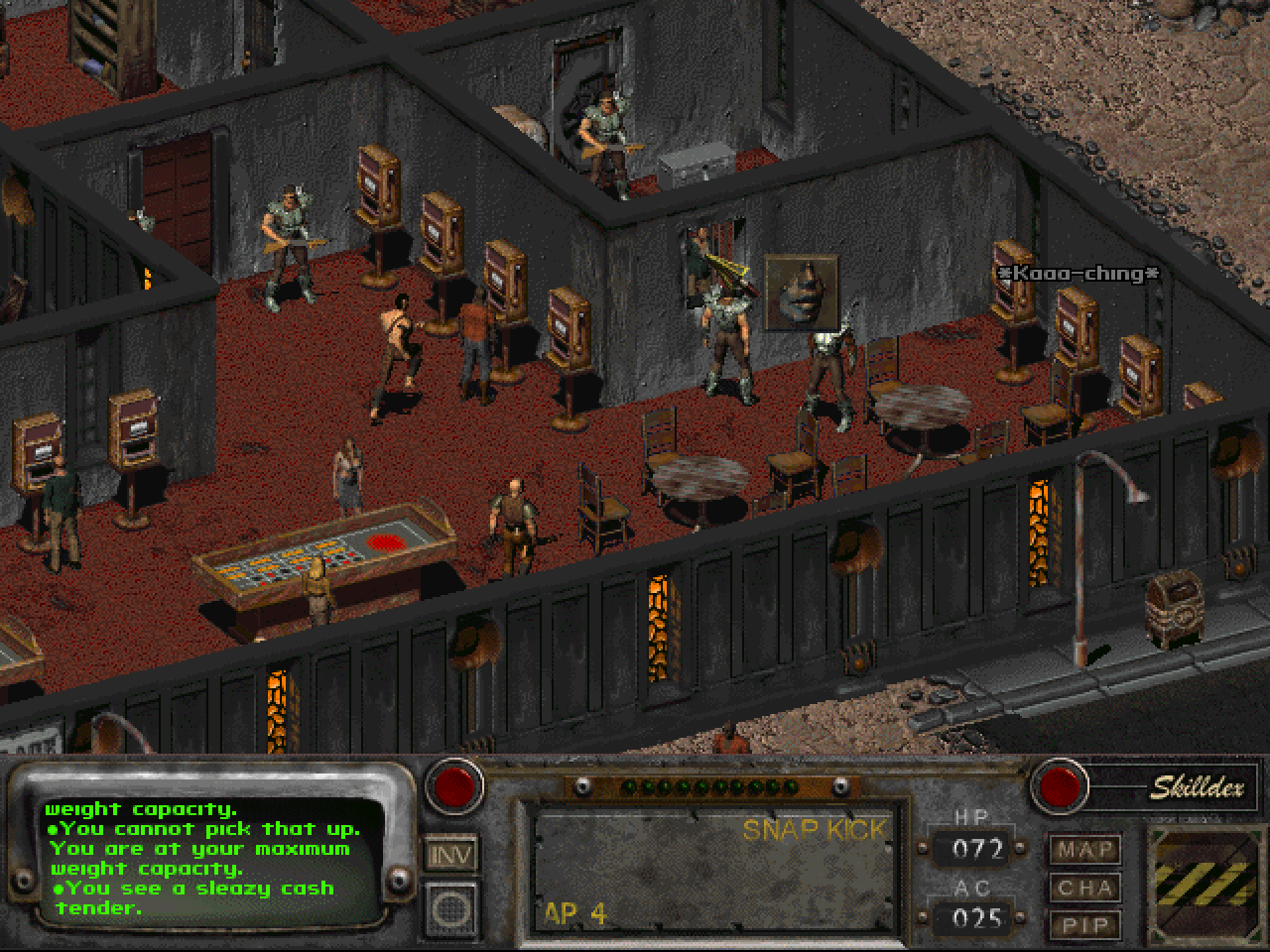 The cash tender at the casino carries around $3500 and restocks every few days or so.  Good place to convert any spare weapons at this early stage. 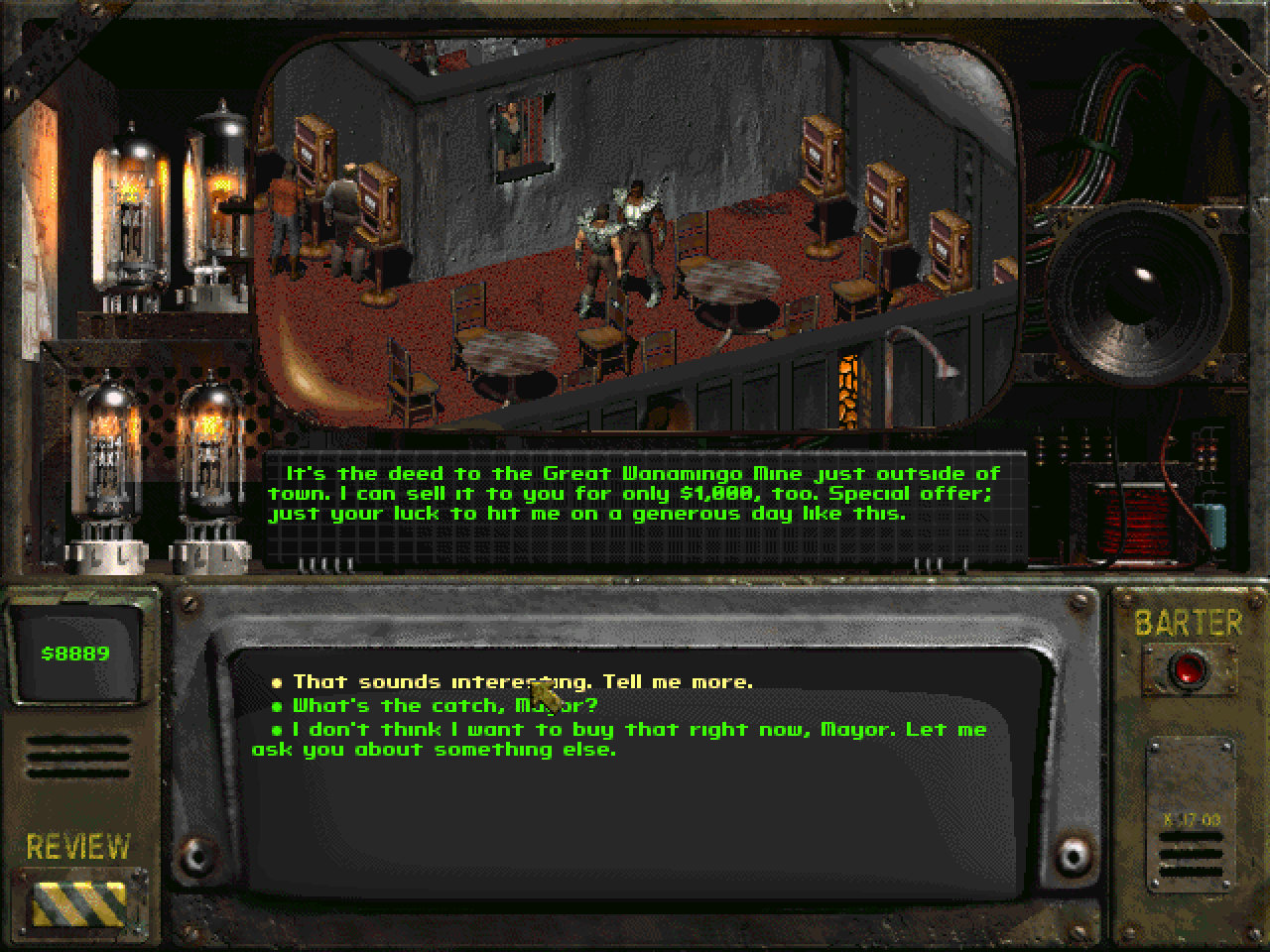 This was a quest I attempted to fulfill the conditions for, but couldn't complete due to the wall bug.  You can buy the deed to the mine from Redding's mayor for $1000, then sell it back for $2500 once you clear out the wanamingoes.  This also earns you 3500 experience once you kill them all and another 1000 experience once you sell the deed back. 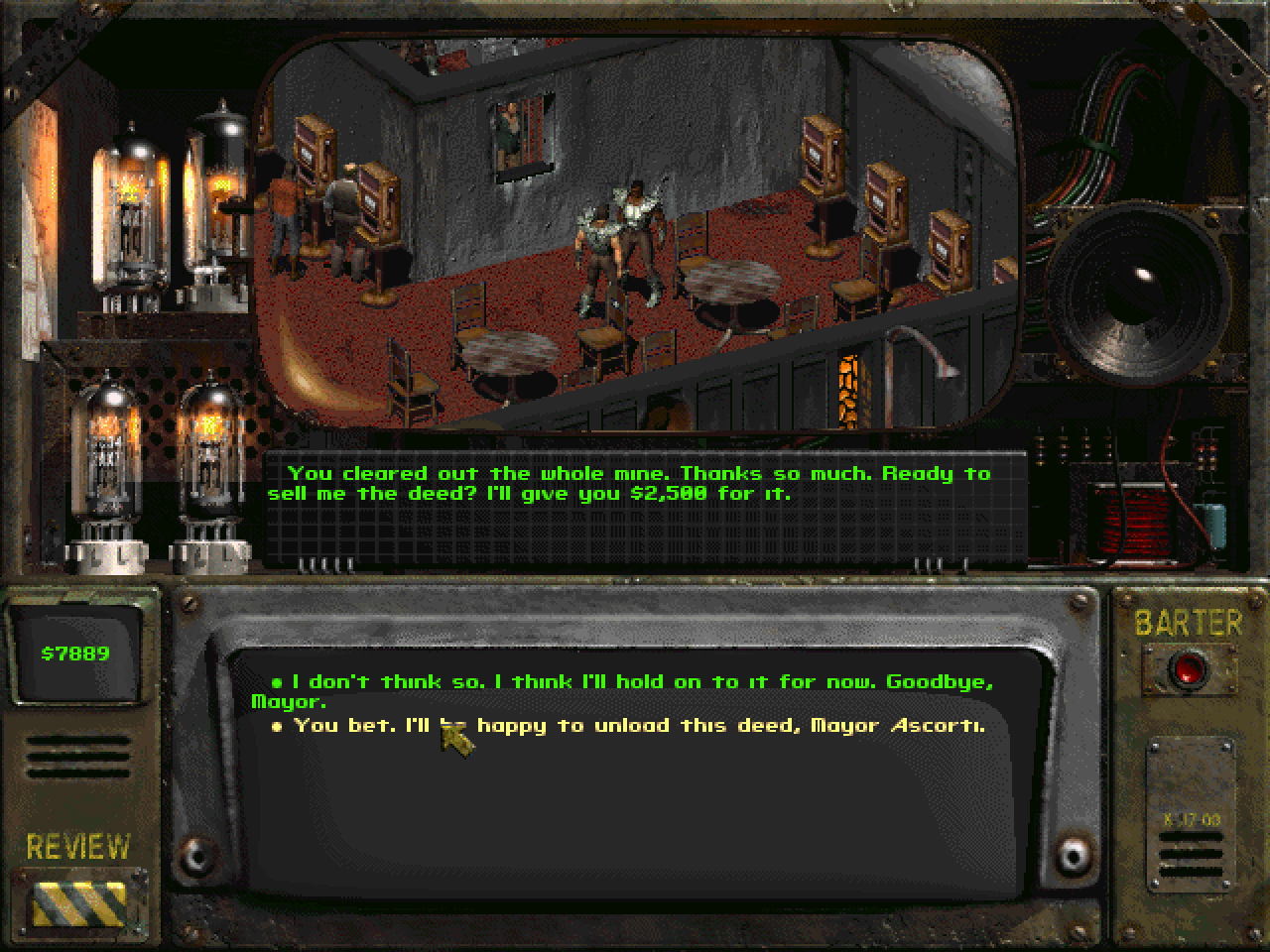 (I used a save editor to flag the quest as complete, since that's a large reward I'd miss out on otherwise) 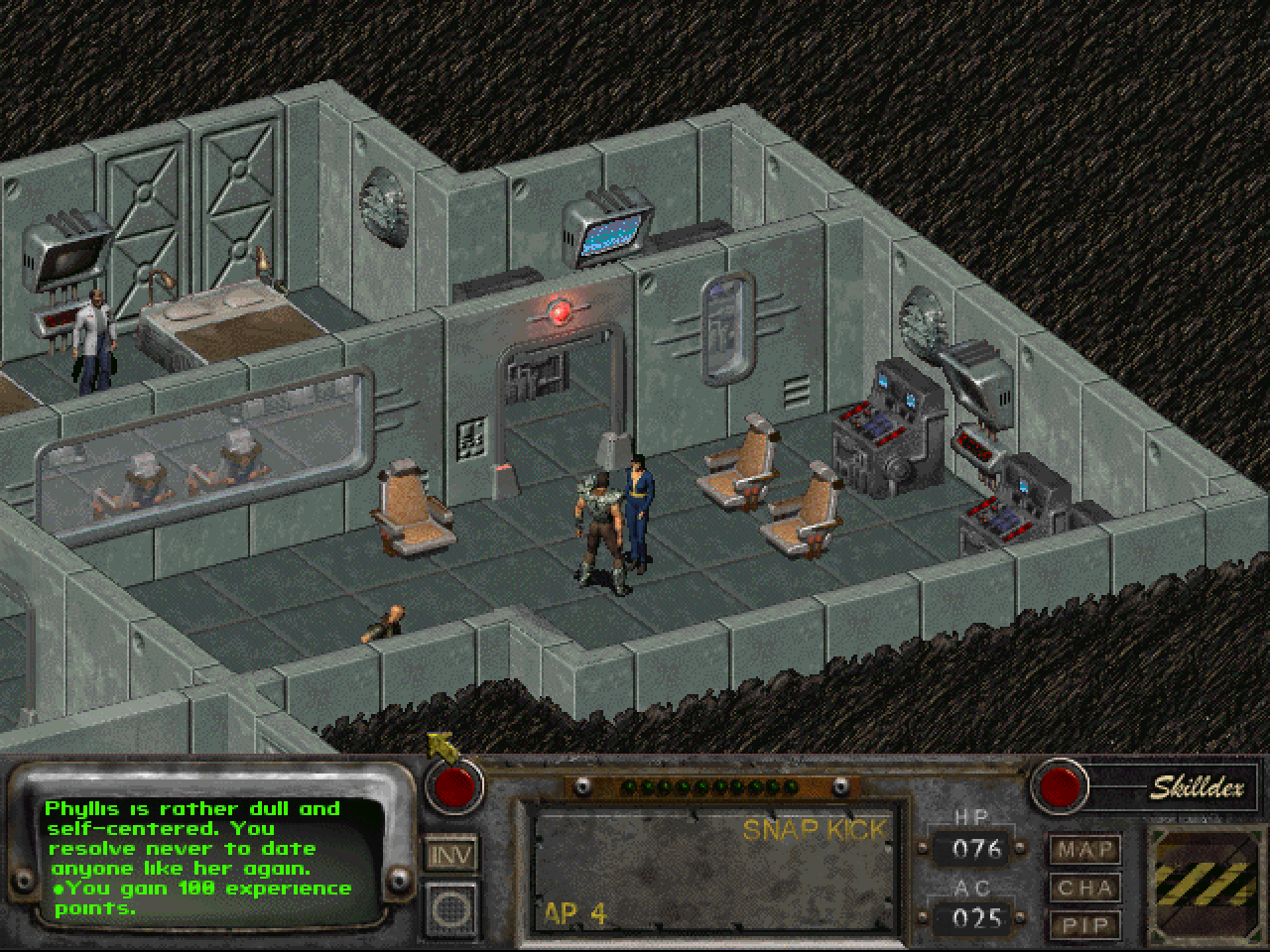 Back in Vault City, you can talk to Phyllis about a few things once you have 75% in Doctor skill.  With high Charisma and Speech, you can date her for 100 experience... 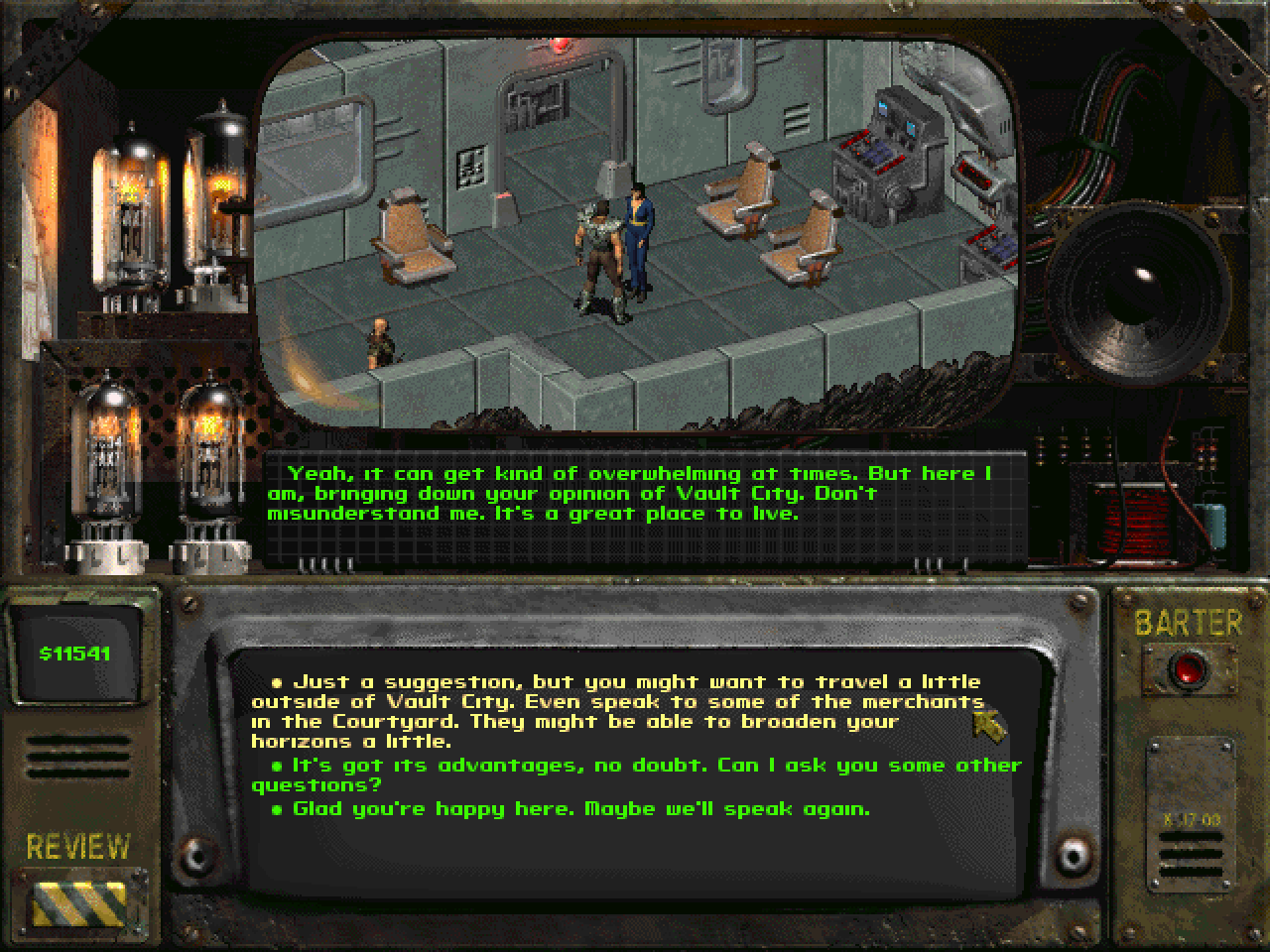 ...talk to her about leaving the city for 300 experience (choose the "similarity of Citizens" option)... 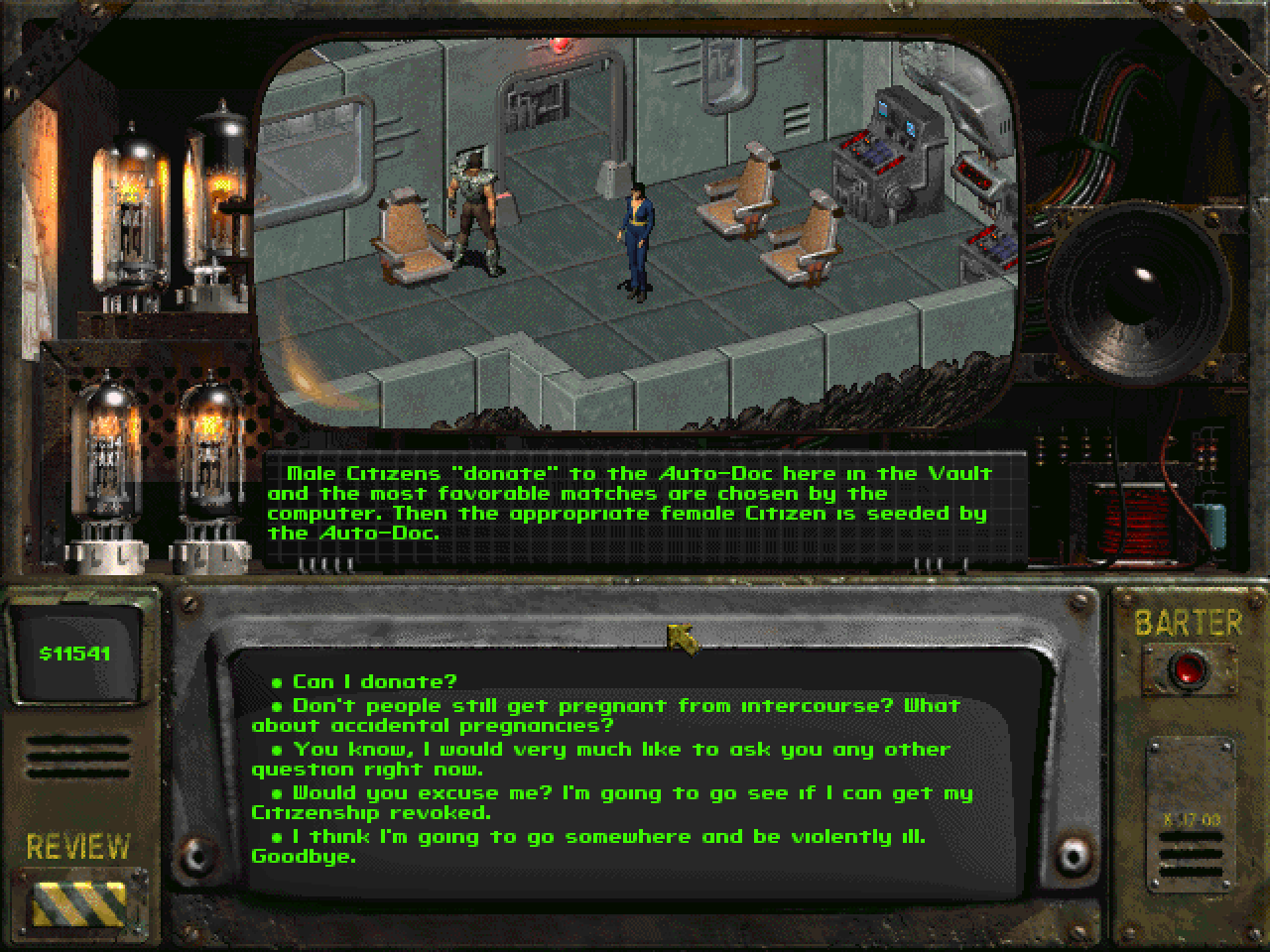 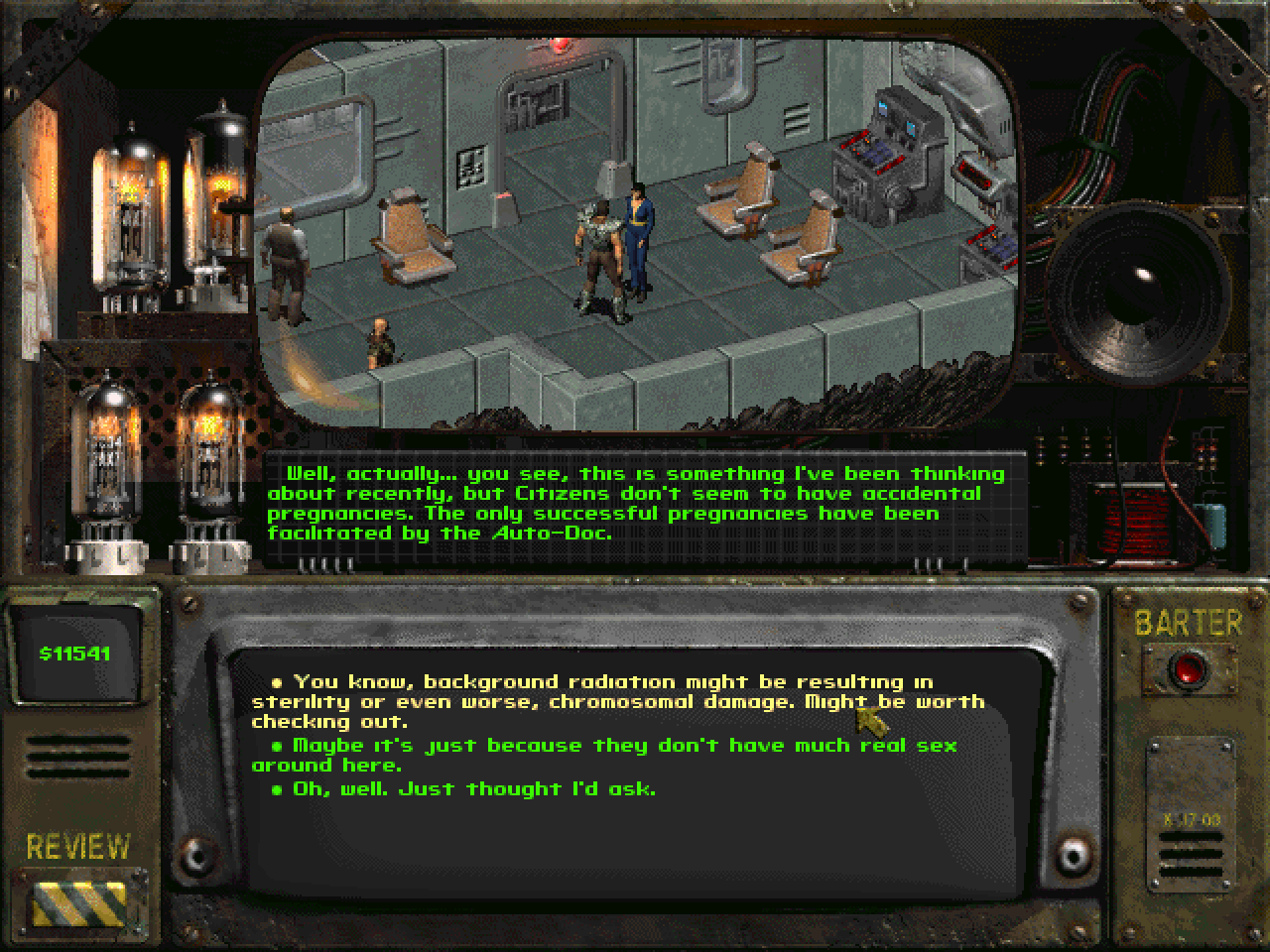 Finally, you can talk to her about Vault City's potential sterility for another 300 points. 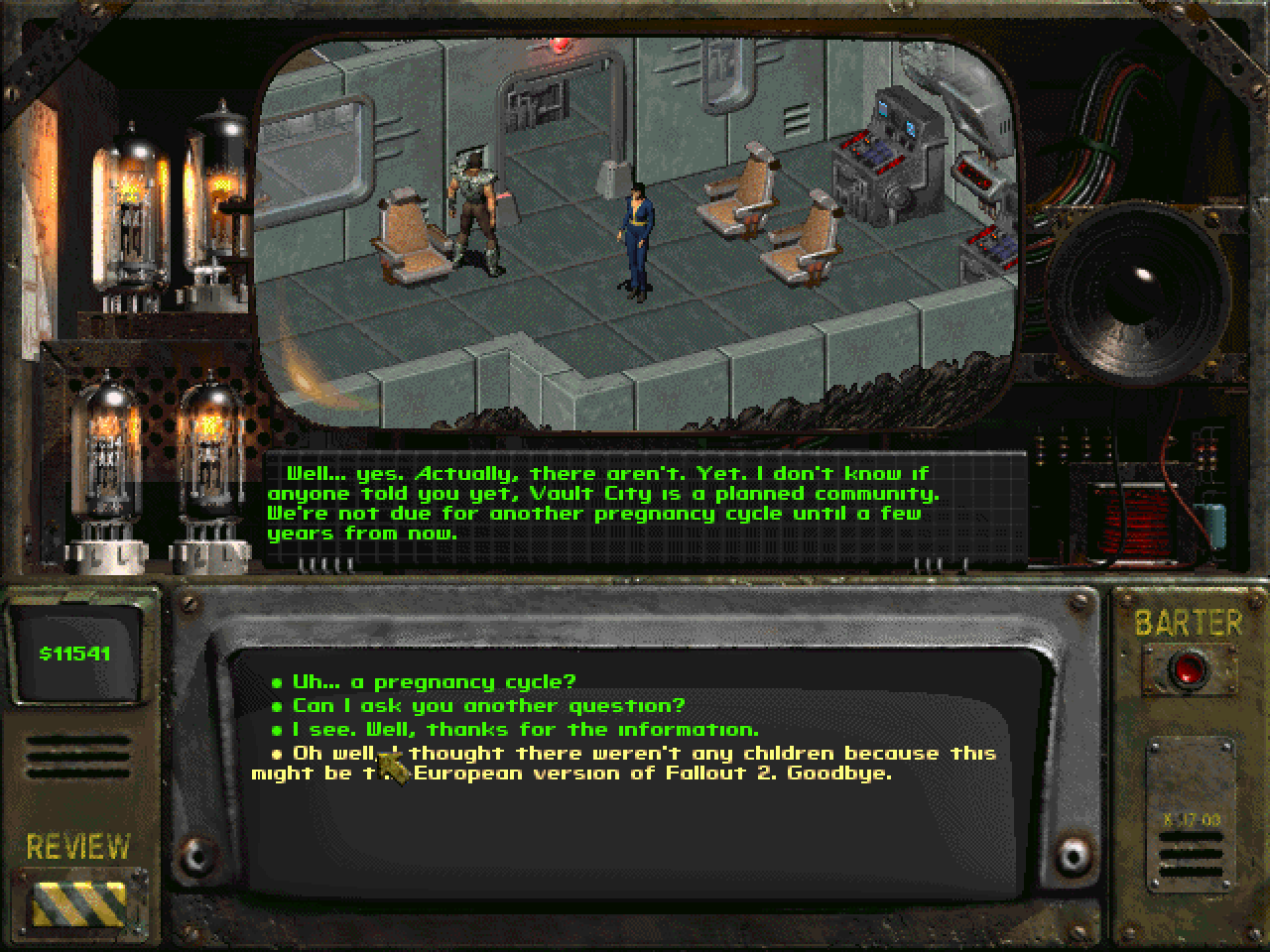 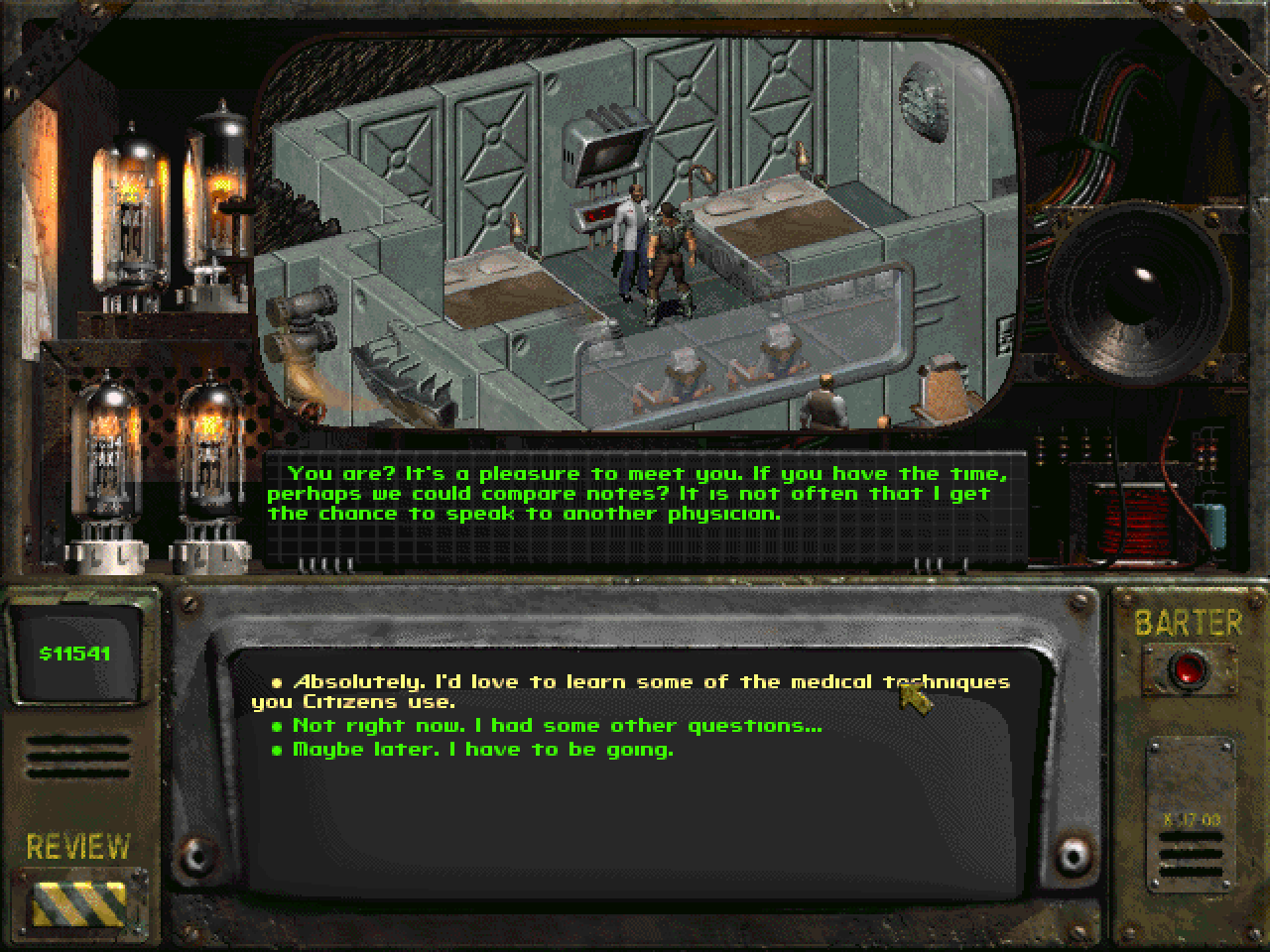 If you have 75% in Doctor you can also talk to the doc about Vault City medical techniques.  This gets you a 5% bonus to First Aid and Doctor. 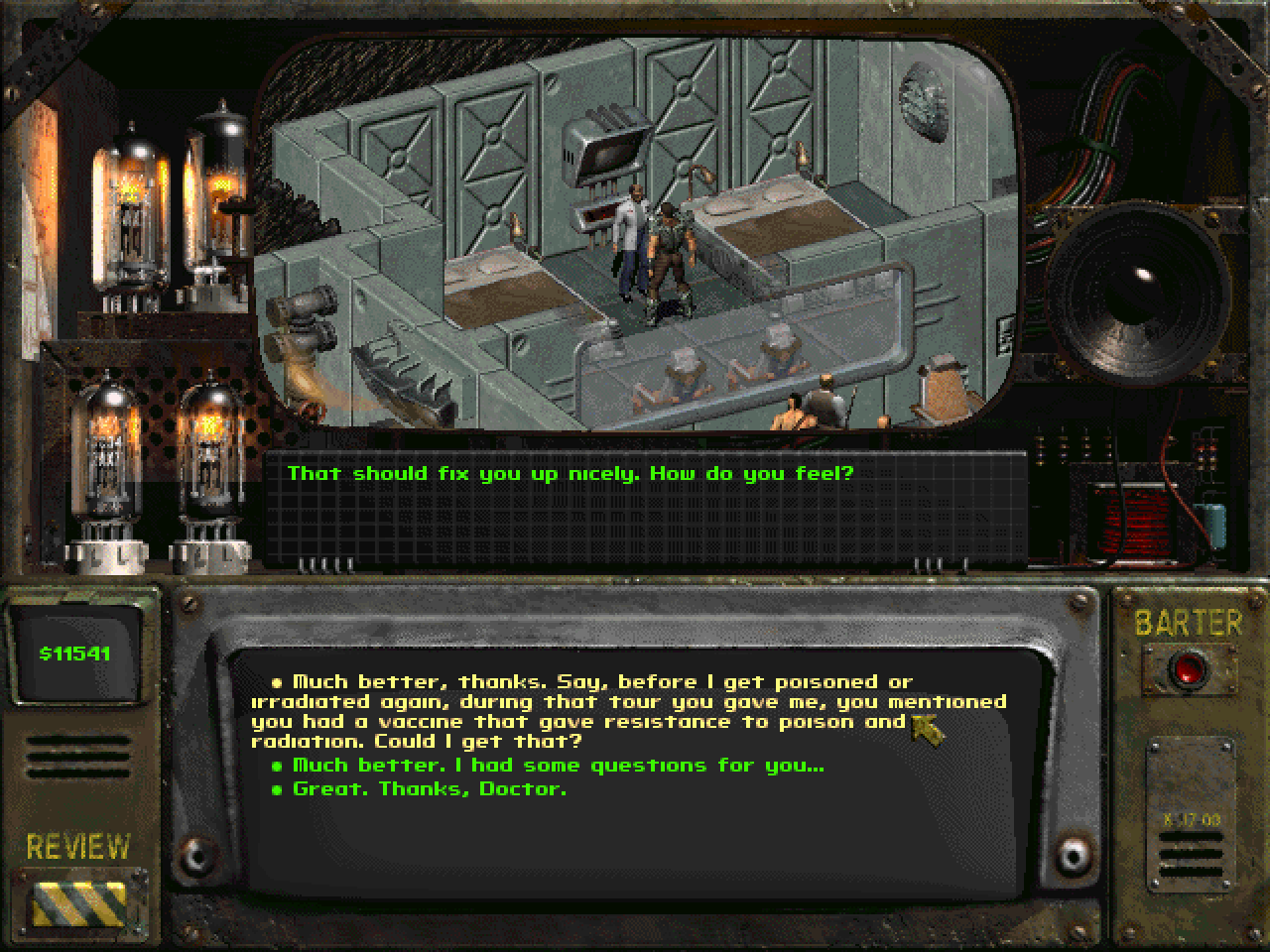 Getting un-poisoned or un-radiated with a 75% Doctor skill will also allow you to talk to him about innoculations.  This gives you a 10% bonus to poison and rad resistance. 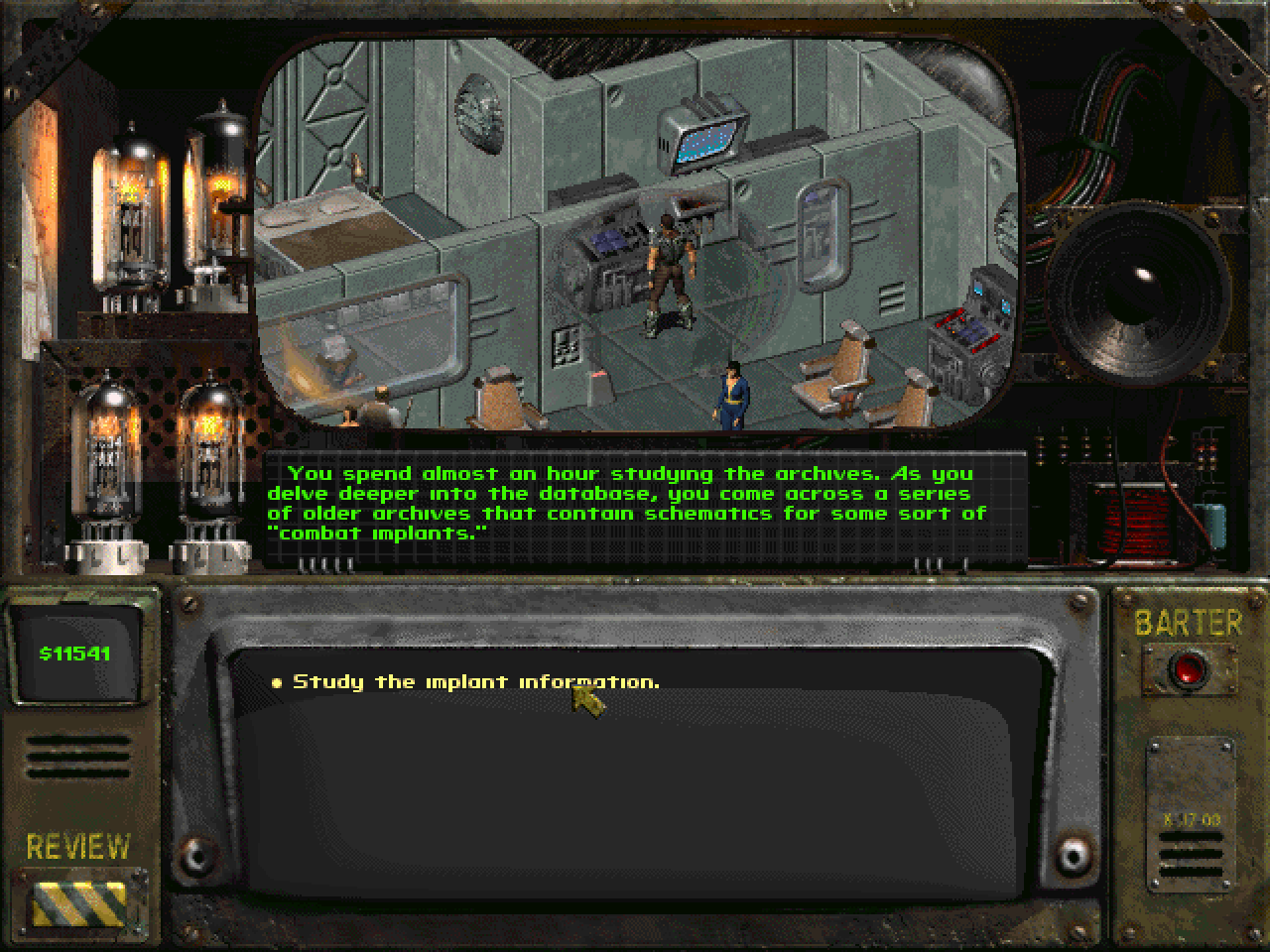 You can also examine the computer in this room.  With 75% Doctor, you can learn about combat implants.  The doc here won't install them, but some others will.  You'll need a suit of Combat Armor to dismantle in order to get them, though. 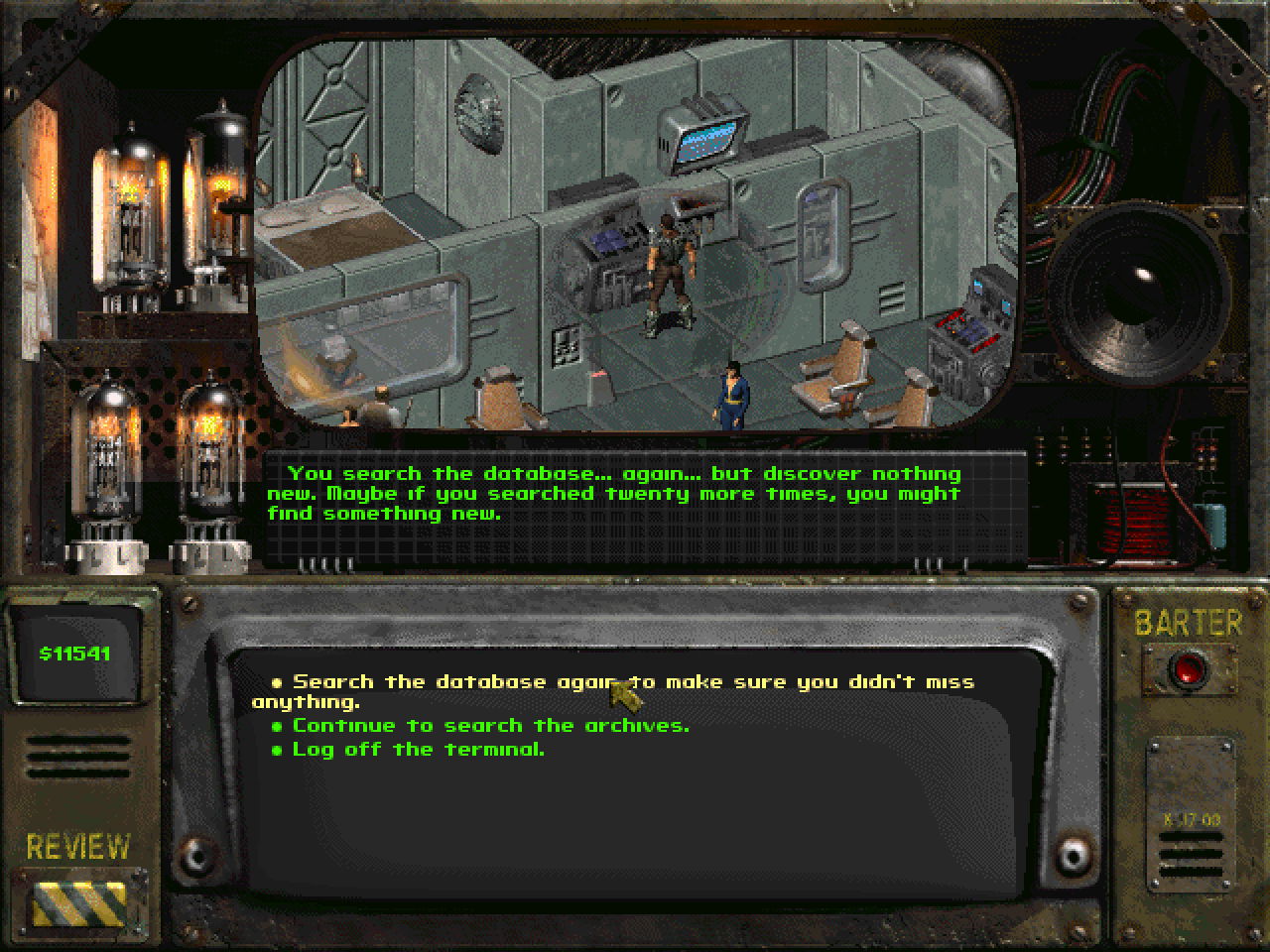 There's also a small easter egg with the console.  I'll just leave that for you to try yourself. 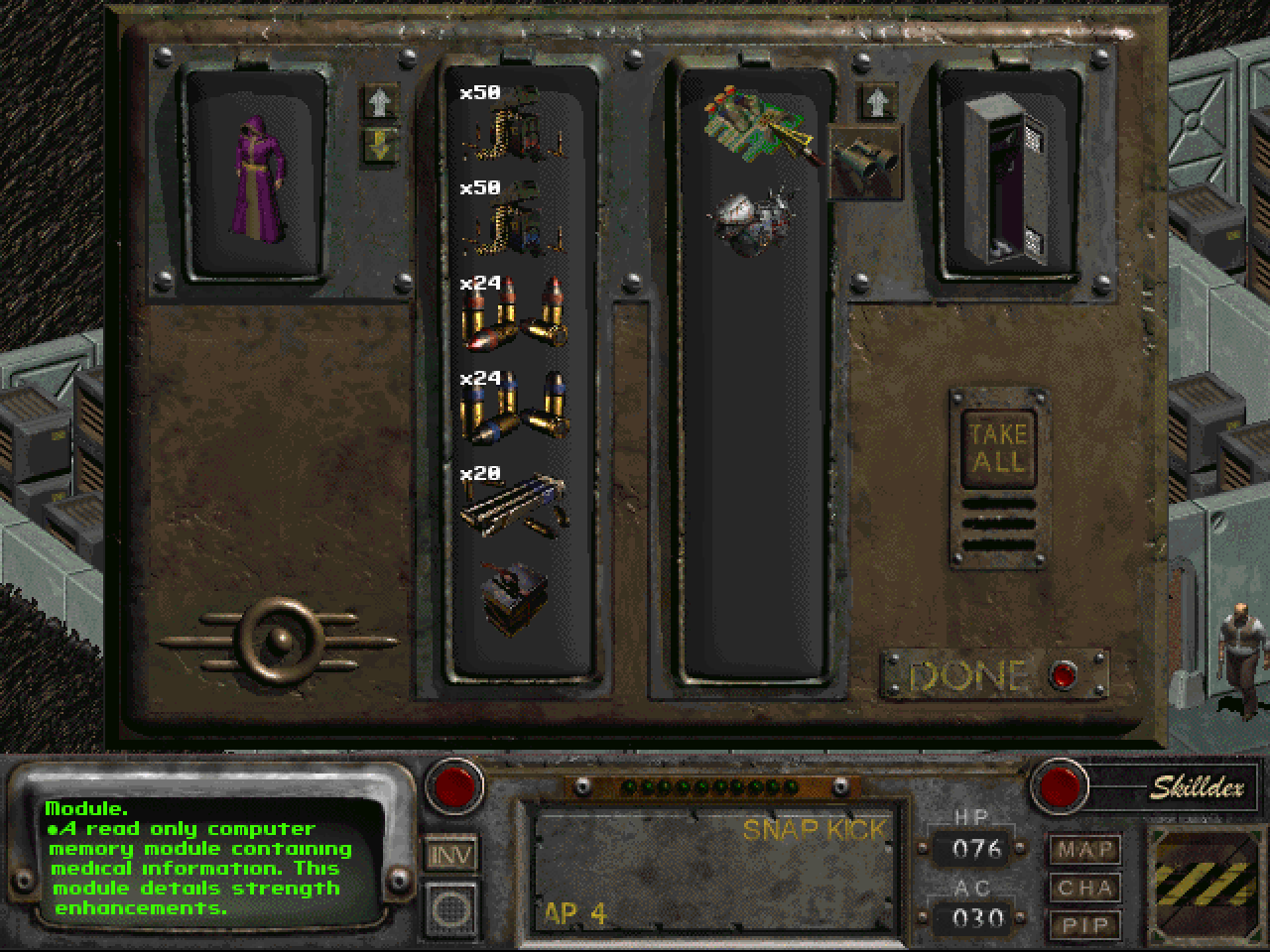 Finally, if you have 8 Strength (or 7 Strength and a Crowbar) you can pry open the doors on the second floor of the vault and find a Red Module.  This will be handy later.  (The rest of the rooms just contain scores of Water Chips, which are useless to you in this game). 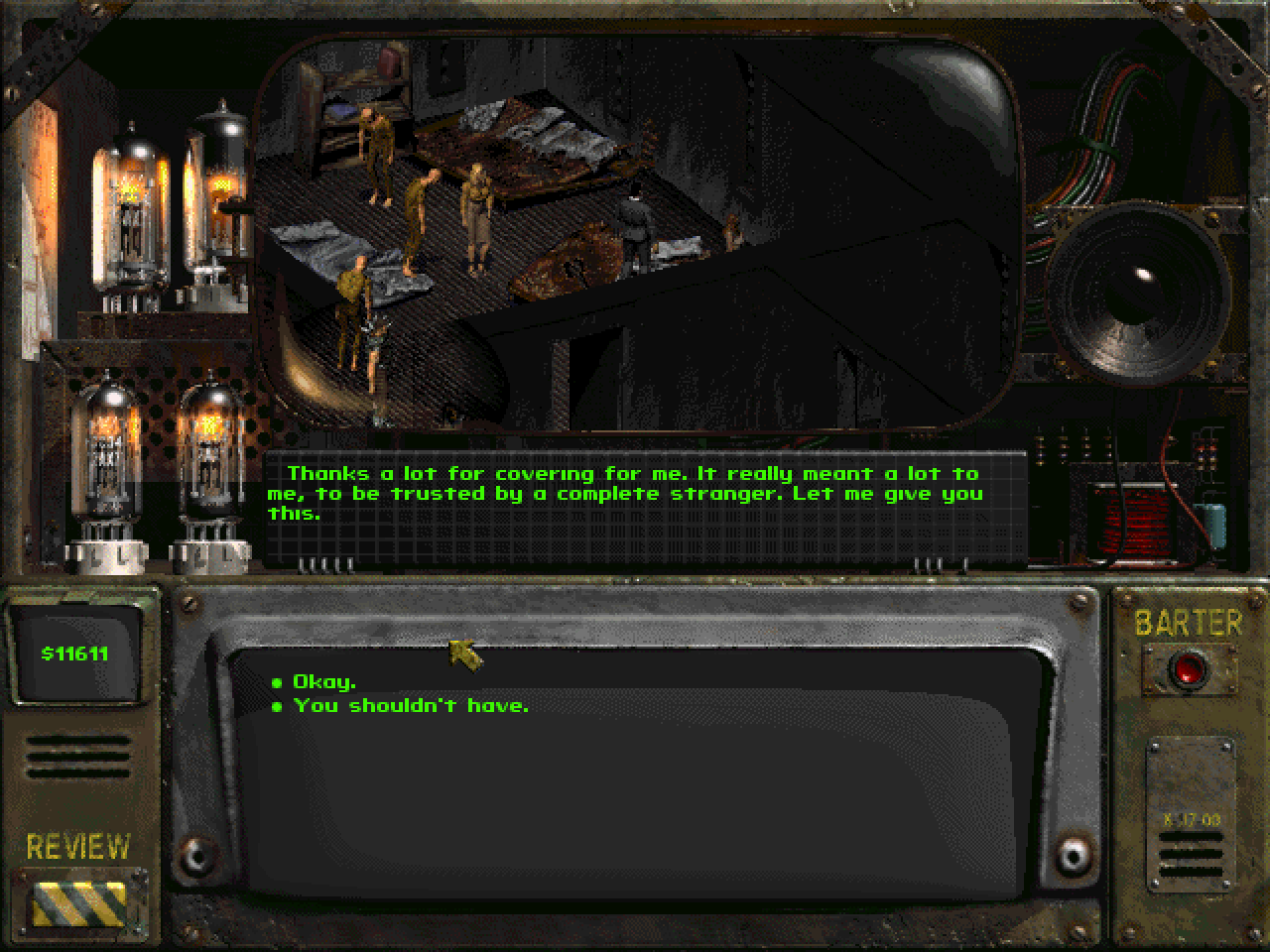 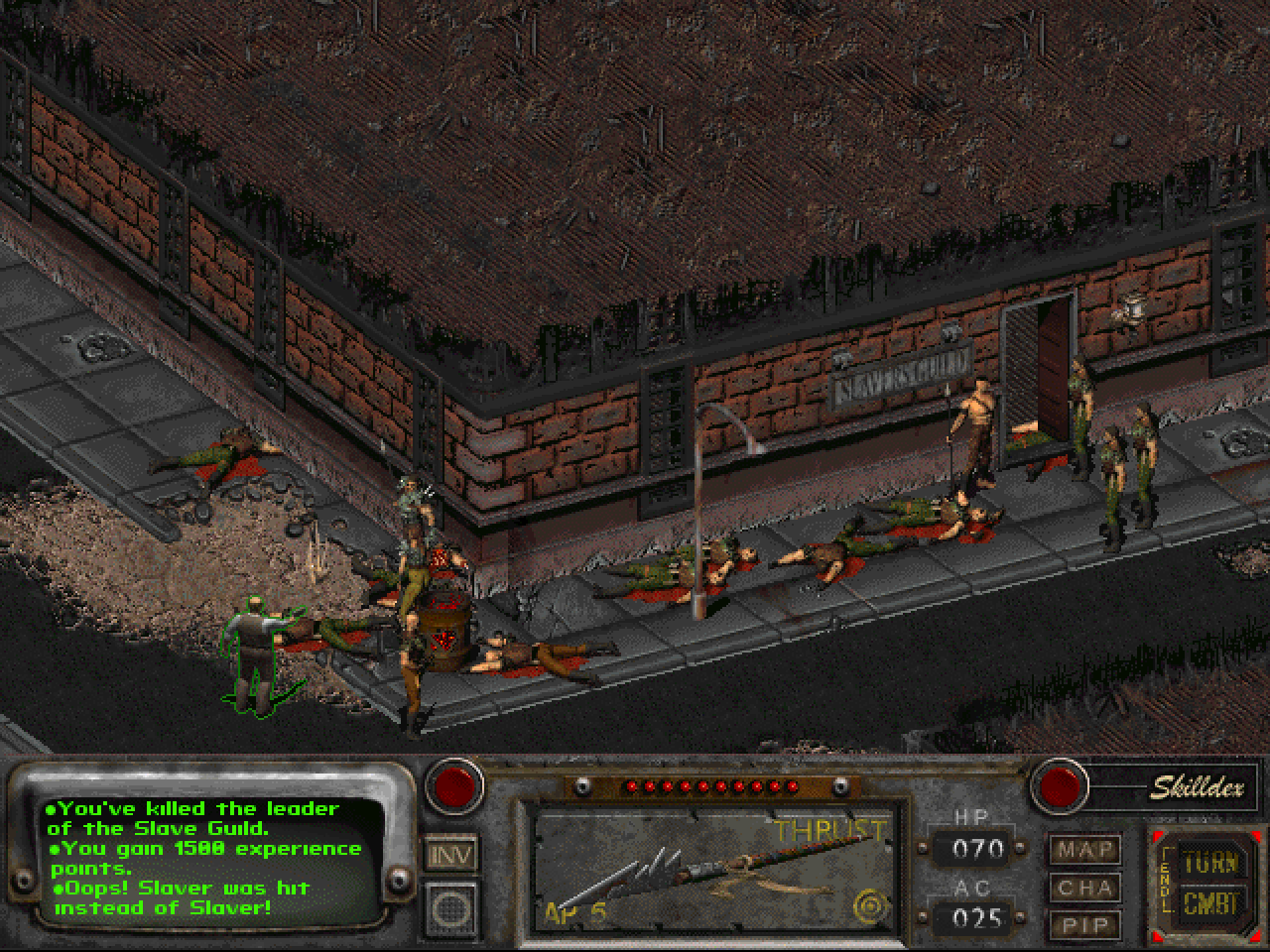 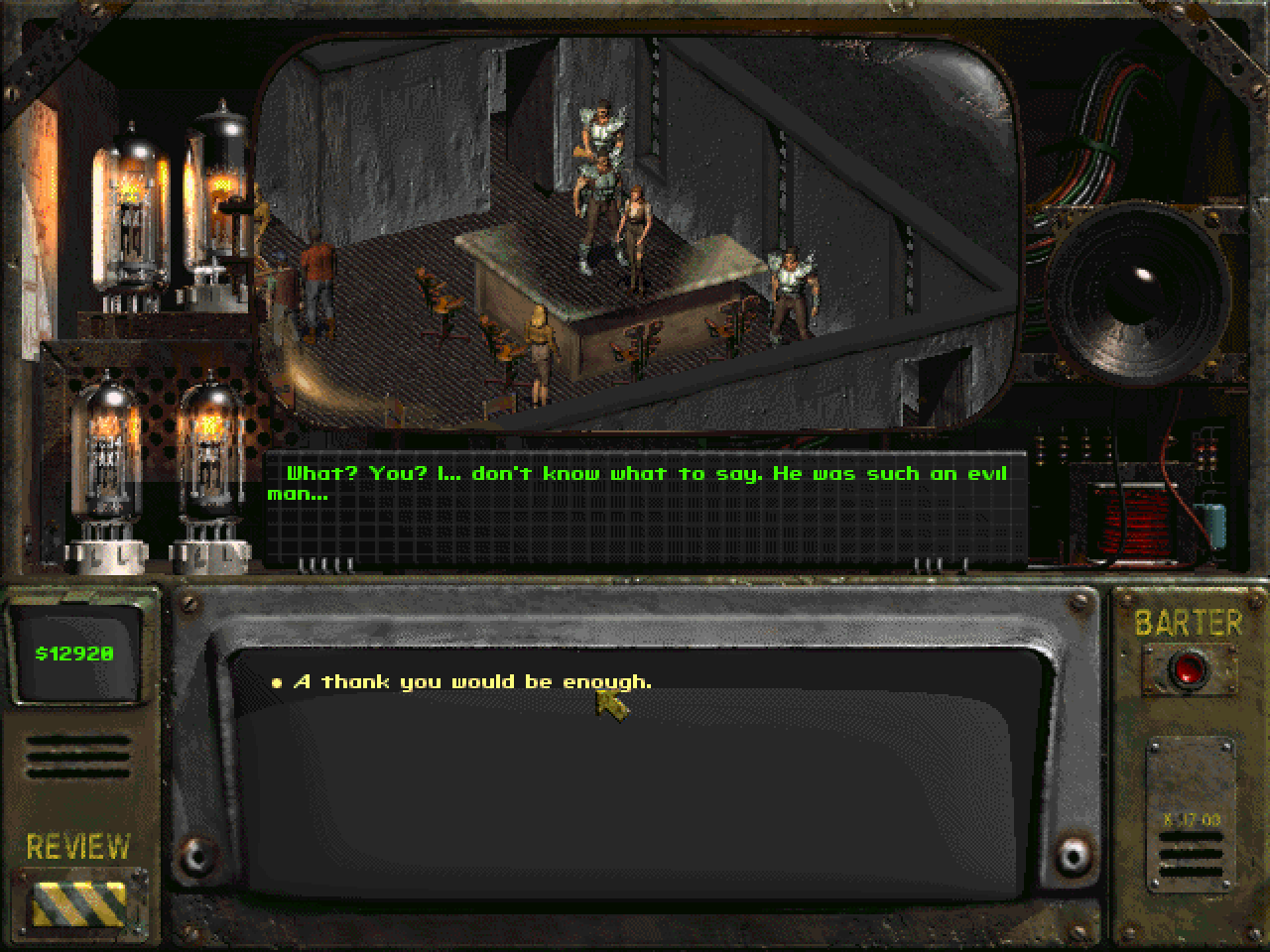 Killing Metzger will not only earn you 1500 points and some positive Karma, but you can talk to Becky afterwards for $1000 (if you didn't destroy her still).  Don't forget to free the slaves for some more experience and Karma! 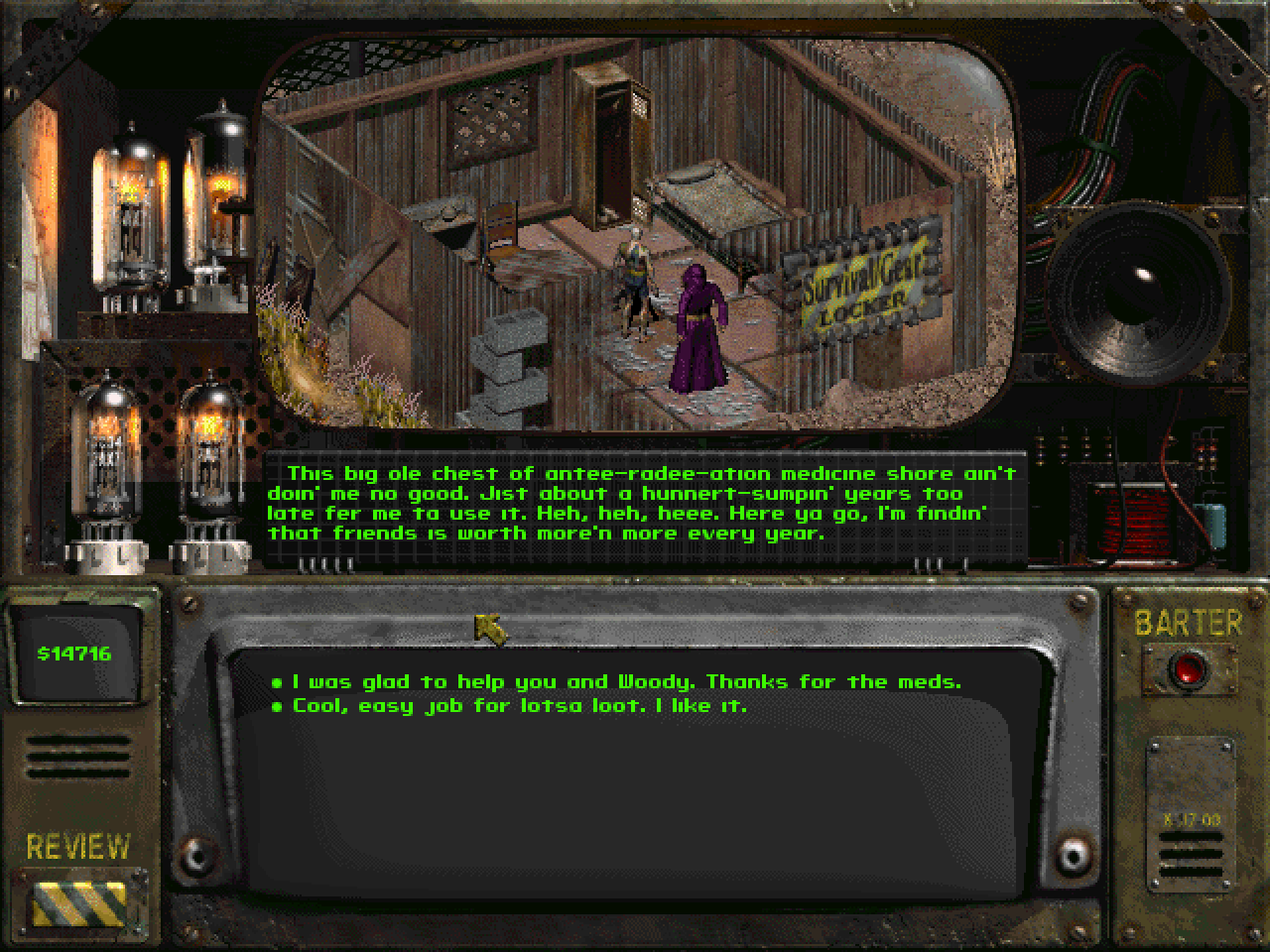 Finally, I went back to Gecko and talked to Percy to get some sellable goodies.

I didn't get a screencap of it, but I fought one of the Morton brothers outside town.  He had a .223 pistol and another random group had an H&K CAWS, so I gave Sulik and Cassidy some new equipment.  The .223 Pistol is one of the few pistols Sulik will wield, since it has the sprite for an SMG.
(Incidentally, these guys are very dangerous for this stage of the game, so it took me quite a few tries to actually win that encounter...)


Oh, and I hit a special encounter on my way back: The Bridgekeeper.  A not so subtle reference to Monty Python and the Holy Grail.  You can either answer his questions legitimately or not; answering his third question with another question will cause him to explode.  Answering incorrectly causes YOU to explode.

The robes are quite awesome, by the way, giving all the same protections as Combat Armor but weighing half as much.  The only downside is you have to be at least Level 10 for this encounter to appear...