Might and Magic VI: The Mandate of Heaven Part 2

Mastery of all things.

It may be to your benefit to recruit a Factor NPC in either Blackshire or Bootleg Bay; they take 5% of all gold you earn but you get 10% more, so you come out ahead in the end. 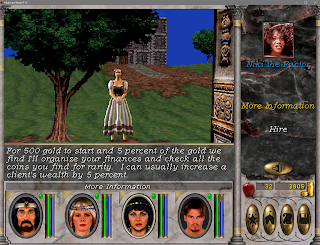 (Later on you can also get a Banker at Dragonsand, who takes 10% in exchange for earning 20%, but Dragonsand is dangerous as all hell so we won't be going there for some time). 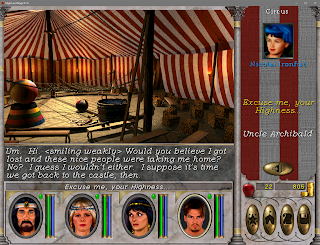 I also went ahead and did the "Find Nicolai" quest since it's kind of annoying.  If you talk to him at Castle Ironfist he'll come with you, but as soon as you click "Rest" or travel to a new area, he vanishes.  You'll have to track him down at the circus and bring him back to Castle Ironfist before you're allowed to re-enter.  The annoying part being that the circus is only in operation three months of the year at three different places:
Blackshire - March 28 - April 27
Mire of the Damned - July 28 - August 27
Bootleg Bay - November 28 - December 27
It happened to be December in my game, and Bootleg Bay is just north from Castle Ironfist, so I went for it.  You also get 7500 XP out of the deal.