Okay.  This is probably better done after you get Locke as he has a much easier time stealing items than the rest of these chumps do waiting for random drops, but regardless.  I did some farming off-camera to get a hold of a full set of Imp Gear, a Snow Muffler and the all-important Offering.

Go to the northwest continent and stumble around until you find Sprinters; they have a 1-in-8 chance of dropping the Imp's Armor (or a common steal with Locke).  Get five of these. 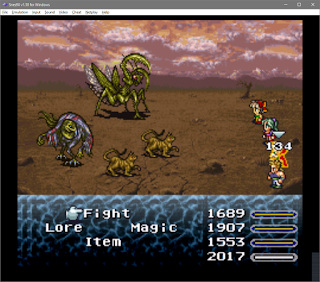 The guys in the back
Go into the woods there and fight the ever-nasty Tyranosaurs until you have an Imp Spear.  They have a 1-in-8 chance of dropping it. 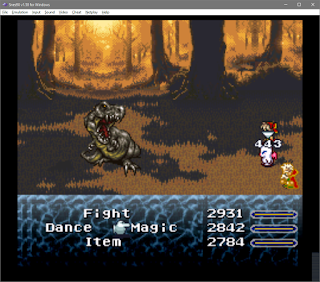 Now go to the arena, bet your Behemoth Suit and get the Snow Muffler.  This is a pain in the ass since Outsider is a jerk who tosses shurikens (which ignore Mblock%) and spams instant death abilities constantly.  He is vulnerable to death spells himself, though, so give Setzer a pair of Doom Darts and cross your fingers.

Now, work down the chain.

Bet three Imp's Armors, fight Rhyos three times, win three Tortoise Shields.  A Float-casted Edgar with Red Armor and a Thunder Shield can avoid almost everything they throw at him.

Now deck Mog out with the Snow Muffler, Pearl Lance and Thunder Shield, and a good helmet; and he'll have 255 Defense and some very useful elemental resistances, making him extremely hard to kill.

Bet two Tortoise Shields, fight Steroidite twice.  With our new Snow Muffler, this is dead easy; equip Mog with a Thunder Shield, Safety Bit and a Holy Lance and he's basically untouchable by anything Steroidite can throw at him.  You'll win two Titanium helmets with ease.

Now equip Cyan with all of the Imp gear, and cast Imp on him. 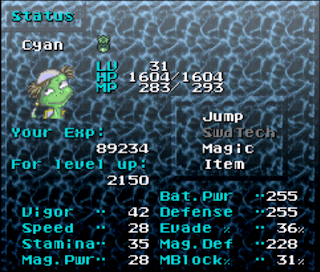 Okay, he's not actually that much more useful in this form.  But it's good for a laugh
Back on track.  Bet one of your two Titaniums to face Brachosaur.  Thankfully, its a variant nowhere near as nasty as the death-dealer you meet on the world map, since all it does is physical attacks.  With Mog's roided-out Defense, you'll beat it with ease and win the Cat Hood.

Finally, bet that Cat Hood to face Hoover.  Another dead easy fight; cast float on your decked-out Mog before going in and he's no trouble at all.  You'll at last win the mighty Merit Award, and Gau will be one step away from becoming a Wind God.

I also went ahead and grabbed a few spare BehemothSuits.  The SrBehemoth shows up on the Veldt after you defeat him once, and he's guaranteed to drop one.  Then I bet one of those and got a spare Cat Hood for Relm.