Kingdom Hearts wrapped in a dungeon crawler with card-based combat slightly similar to the card game "War".  It's actually pretty fun once you figure out how everything works.

As I noted in the video, this is a remake of the original Game Boy Advance version of the game, which was just called "Kingdom Hearts: Chain of Memories". It's essentially the same game overall, just with 2D graphics and much less in the way of voiceover.   (Though it should be noted that while the Japanese version had voiceover in some scenes, it was not dubbed for any other release). 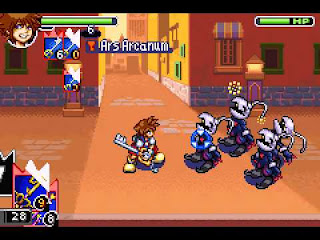