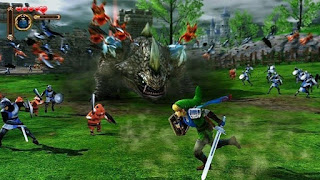 Omega Force's Warriors franchise, while somewhat divisive among reviewers, is a consistently popular series, with seven sequels and countless licensed spinoffs to its name and it shows no signs of stopping.  Hyrule Warriors was a dream come true for those who were fans of both it and Zelda, as it combined numerous characters and scenarios from several Zelda games into a shared universe and even threw in some clever new characters like Lana, Volga and Linkle.  The puzzle solving element of Zelda certainly wasn't lost either, with certain weapon types being required to defeat some enemies or clear obstacles from the field, and a number of hidden secrets and unlockable bonuses adding significant replay value.  It may be rather one-note and repetitious, but it's a satisfying game to play whenever you're in the mood for some over-the-top action with a Zelda flavor. 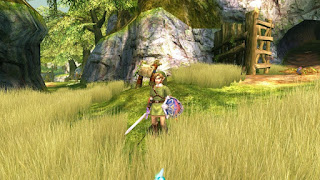 The Wii U was home to two excellent remakes of the Gamecube Zelda titles, and both do a fantastic job updating them by removing some superfluous elements, giving them a visual upgrade and tightening up their overall design.  It was a tough decision between Twilight Princess and Wind Waker, but in the end I had to go for my old favorite on the Gamecube for the fact that it basically includes the best elements of all versions - the quick item swapping allowed by the Wii U's gamepad, the flipped maps from the Wii version and the tight controls of the Gamecube.  All in all, just a stellar update of a fantastic game. 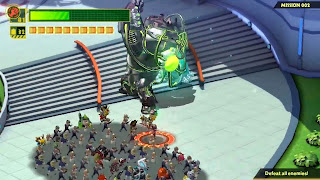 Pikmin meets Devil May Cry with a few visual elements reminiscent of Viewtiful Joe.  That's the Wonderful 101 in a nutshell - you control a whole horde of masked heroes (up to 100) and battle enemies by having them unite into numerous different forms - giant fists, swords, guns and time-slowing bombs just to name a few prominent examples, and there's nary a hint of slowdown or framerate droppage as you play.  Of course, as per the standards of Hideki Kamiya games, there are also a ton of hidden secrets, challenges to overcome and plenty of crazy humor throughout.  The game also makes clever use of the Wii U's gamepad, allowing the player to perform Unite Morphs by drawing shapes on the screen (though I personally found it easier to just use the Pro Controller) and shift to a closer-in view for navigating small areas.  While a bit rough in some respects and not all of your objectives are immediately clear, The Wonderful 101 is exceptionally fun once you're used to its high-energy style and difficulty level. 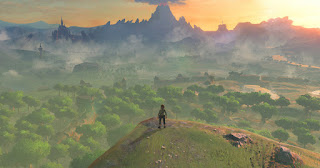 Breath of the Wild is the most divisive Zelda game since the last one (a divisive Zelda title?  The hell you say!), but I found a lot to enjoy in it.  With BotW, Nintendo finally stepped into the realm of modern gaming with an open-world adventure that features a polished physics engine and nearly totally free-form exploration and gameplay.  The player is essentially given control of Link and only provided with sparse mission objectives, with how and when they carry them out being left completely left up to them.  And given how vast, beautiful and amazingly well-crafted the gameplay and environment are, it'll likely be a long time before you get back to working on the main storyline.  Dungeons are generally much shorter, but feature puzzles that are up to the series' standard in every respect, requiring the player to make clever use of their abilities (as well as the physics in the game engine) to make their way to the end.  The physics also come into play quite often in combat, allowing the player to ambush enemies by detonating nearby powder kegs or roll boulders down hills at them.  Even the cooking and potion crafting in the game is surprisingly fun, giving the player a new way to solve problems they encounter by temporarily bolstering their own abilities in a number of ways (such as a temporary health boost or fire resistance).  Even just wandering around the world is surprisingly fun thanks to some clever new abilities - in addition to spell-like effects that allow the player to use the in-game physics to solve puzzles and traverse obstacles, one can fly around with a hang-glider and climb up almost any surface (to the limit of the player's Stamina bar) - in essence, if you can see it, you can probably reach it through some means or another.  It all culminates in a vast gameplay experience that grants the player a tremendous amount of freedom to explore and experiment, and while it does have some serious flaws (most prominently the idea that more content is better than concise, well-designed content), there is a lot of fun to be had in Breath of the Wild.

And hey, any game with dynamite fishing is okay in my book! 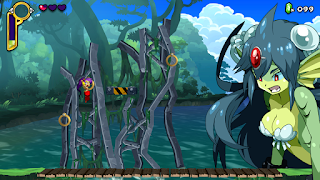 Half-Genie Hero is easily the most fluid, fun and enjoyable of the Shantae games, substantially polishing up its design while losing none of its charming characters, setting or dialog.  The overall gameplay has been changed up drastically, turning the experience from a slow-paced Metroidvania into more of a Mega Man X styled format.  The player gathers new abilities after completing a stage, which they can use to reach new secrets while exploring previously-cleared levels; the mouse form lets the player slip through narrow passages in some platforms, for example, while the bat form grants limited flight.  Fantastic 2D animation and a stellar soundtrack complete the package, making this feel like a classic 16-bit platformer in every respect. 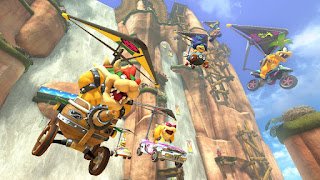 Mario Kart 8, to me at least, is redemption for a franchise that slumped into mediocrity many years before, as I found all of the MK games since 64 were severely lacking in one way or another.  Whether it was clumsy mechanics and awkward track design (Double Dash), horrendously unbalanced gameplay (DS, Wii) or game-breaking bugs that inexplicably took months to patch (7).  8, however, returns the franchise to form in fine fashion with its polished mechanics, surprisingly strong balance and an incredible sense of speed.  The new mechanic (anti-gravity stretches on the tracks) is surprisingly fun, giving both players a burst of speed when they collide, but the heavier of the two involved wins out on controlling their direction, so it gives a nice way to balance things out between the lighter and heavier characters.  Even the DLC for the game is surprisingly well thought-out, adding in new characters, cars and tracks inspried by other Zelda games and giving you a substantial amount of value for your money.  Honestly, the only real fault with the game was the terrible new take on the battle mode, which lacks any sense of tension due to its massive, open environments and short time limit. 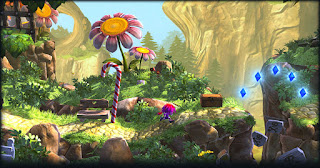 Born of a controversial franchise that has its origins on home computers all the way back in the 1980s, but I don't think anyone expected that it would make a grand comeback over twenty years later and become one of the finest titles of its generation.  Twisted Dreams combines elements of Sonic and Donkey Kong Country together and does so exceptionally well, providing fast, puzzle-based gameplay and surprisingly large, nonlinear stages that the player is free to take their own paths through.  The central mechanic of the game is on your character's ability to shift between two modes - Punk and Cute - each of which not only changes up your character's abilities (from a fall-slowing spin to being able to turn into a fireball in order to ricochet through narrow corridors and smash through blocks), but also changes up the game's environment from bright, colorful and friendly to a darker, more sinister version; however, this also makes subtle changes to the level design, causing some enemies to become platforms (and vice versa) and causing some damaging hazards to retract, so frequent swapping between the two is a necessary mechanic to traverse the stages.  Clever, gorgeous to look at and incredibly fun to play, Twisted Dreams is a masterpiece in the genre. 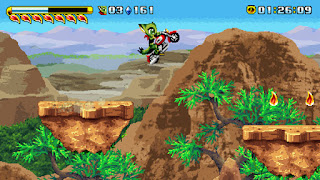 An unabashed homage to Sega Genesis action titles like Rocket Knight Adventures, Sonic and Gunstar Heroes, and it mimics their style with exceptional grace and skill.  Everything from the colorful environments to the fluid animation to the enormous, intense boss monsters are here in fine form, and it's all topped off by featuring three unique characters, each with their own distinct gameplay style - Lilac is the most "Sonic-like" with her ability to quickly build speed and perform deadly spinning attacks, Carol is a bit more of a physical fighter (with her maneuverability and abilities shining the most when she has a motorcycle to ride), and Milla, while the slowest and least durable of the three characters, can float for short distances, as well as generate shields and throwable objects to deflect attacks and damage enemies.  Overflowing with nostalgic charm but very distinct in its own ways, Freedom Planet is a fantastic title. 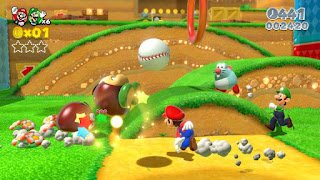 Easily the best Mario game of its generation, 3D World perfectly captures the crisp, challenging feel of the old Mario games with its uncomplicated yet challenging stages and fluid gameplay.  Of course, it also takes advantage of the strengths of modern gaming as well to deliver bright, colorful environments, fluid animations and co-op play for up to four players, which, unlike NSMB, does not detract from the overall experience, instead making the action just as fun as it is chaotic.  There's even some nice nods to previous mario games in the form of a very cool hidden character and a plethora of extremely challenging bonus stages after one conquers the main game.  A killer package for any Mario fan. 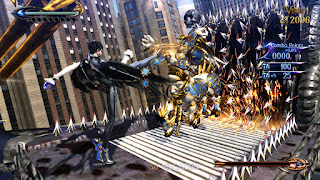 Bayonetta 2 had an extremely tough act to follow, as its predecessor was arguably the finest action game ever created, but Yusuke Hashimoto made a very worthy followup to the original game.  The gameplay is more frantic than ever, with numerous new angels, demons and over-the-top setpieces to battle through, and the scale is no less impressive, with bosses and their attacks being absolutely massive in scale.  Of course, the player also gets a plethora of new weapons, fighting styles and powers to match this menace, ranging from a giant bow to a three-bladed scythe to a Chain Chomp (yes, really).  Crazed, high-octane fun at its finest, and the fact that it came packaged with a fully-featured port of the original game makes it the definitive action package on any gaming platform.