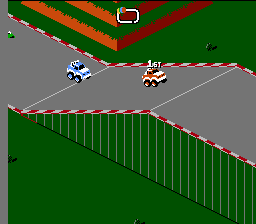 The original RC Pro Am was revered as a great racer at the time it came out, and rightfully so; it blended arcade-styled challenge with sharp graphics and the ever-present fun of blowing up your opponents with land mines and missiles to overtake the lead. Hell, it was practically an early predecessor to Nintendo's long-running Mario Kart franchise. RC Pro Am II managed to be even better, upping the challenge and visuals, adding in a four-player mode and introducing a more intuitive shop system for car upgrades, but sadly not many people noticed it as it came out well after the SNES had already debuted... 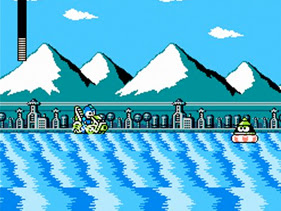 This particular Mega Man game gets a bit of a bum rap, being overlooked by many due to the fact that it doesn't really introduce too many new elements to the formula. But my argument is this: why fix what ain't broken? That seems to have been Capcom's philosophy for this game too - while it may not break a lot of new ground, it's just a well-made game with finely polished music and visuals and some cleanup to various mechanics of the game - notably the charge shot feeling a bit less clunky and the occasionally spotty hit detection of earlier games being airtight this time around. Perhaps the only real downside I'd point to are the early stages of the final gauntlet, which seem to have been engineered to be as annoying as humanly possible... 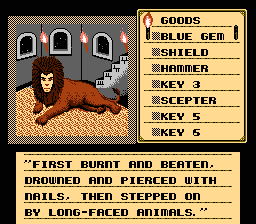 The third and final game in what's affectionately called the ICOM Trilogy, and it's definitely the most iconic and memorable of the three. This is in no small part due to its fantastic soundtrack that perfectly complements the haunting atmosphere of the game's environment - a booby trap laden castle populated by all manner of evil beasts and puzzles to solve. The solutions to the puzzles can be a bit opaque (you must use the spear on the troll in order to get across the bridge - nothing else will work) or even downright silly at times (throwing a star you got off a map to kill a wyvern...?), but it's nevertheless an engrossing experience with some very clever storytelling throughout. Oh, and don't forget to collect any torches you find - if yours ever burns out, it's an immediate game over! 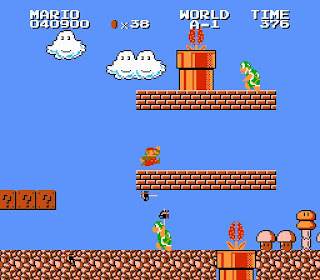 The "real" Super Mario Bros. 2, unreleased in North America for many years because of Nintendo's fears that it would be too difficult for North American gamers and that people would reject it for being too similar in appearance and gameplay to the original. Well, their fears weren't entirely unfounded, because the game is tough as nails; with some new mechanics like winds that push you around, piranha plants that no longer fear the player, and warp zones that take you backwards instead of forwards, as well as some truly sadistic stage design, it's a real challenge to complete. Oh, and there are also five hidden worlds to explore with some downright insane unlock conditions, which only keeps you coming back for even more punishment. That said, those who can endure its monstrous challenge are in for a rewarding experience.

Capcom created numerous licensed games in the NES and SNES era, many of which hold up surprisingly well to this day. By far the most fondly remembered, however, has to be Ducktales. Far from being a linear platformer, Ducktales features five large stages to explore, each with numerous hidden secrets to find, including two hidden treasures worth over a million dollars apiece. Finding them all was more than just a side-venture, though - it was a necessity to get the game's best ending, which required you having a score of over $10,000,000 by the time you completed the final stage. Having top-notch graphics and music per Capcom standards certainly didn't hurt its appeal either. All in all, a short but sweet adventure. 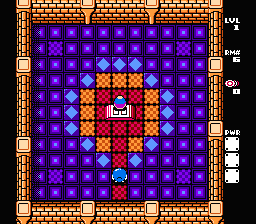 Spawned from the Japanese puzzle game series "Eggerland", Adventures of Lolo had a trilogy of games on the NES before fading into obscurity. Which is a shame, because they're all quite good games with well designed puzzles and some clever gameplay mechanics. As they all have very similar mechanics, visuals and music, I've decided to lump all three together under one heading. But if I had to pick one over the others, Lolo 3 would win out for adding in not only tougher puzzles, but a touch of non-linearity as well - there is actually an overworld this time, enabling you to do dungeons in any order you wish (to an extent - you'll still have to complete some dungeons in order to unlock others). There's even boss fights at the end of each dungeon now, giving the game some action-oriented variety instead of just room after room of puzzle solving. 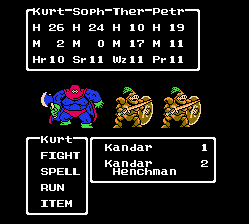 Probably the premier JRPG series, the first game was hugely popular in its time and the franchise has continued to be an unstoppable force in Japan, with most stores even refusing to sell the games on weekdays so kids don't skip class to go buy them.  Among them, Dragon Quest III continues to be regarded as the best of the NES era, and for good reason - it keeps the defining charm and simplicity of the series while working in a Final Fantasy style customization element, letting you pick from several classes to tweak the game's difficulty to your liking.  About halfway through the game you can even change their class, letting them carry over some stats from their original jobs while branching out into an other discipline to become even more powerful.  Story wise it also serves as a clever prequel to the first two games, with a lot of events that are only told in legend there becoming reality as you venture across the land and conquer the evils in it. 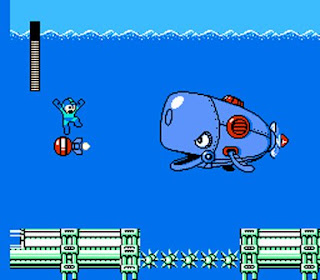 Mega Man 4 had a tough act to follow after the runaway successes of the second and third games in the series, but it managed to distinguish itself remarkably well. Returning the series to its difficult roots while retaining its improvements, the game also implemented a couple of other interesting features. Notably side-paths in some stages that led to new usable items and a new gameplay feature in the form of the Mega Buster, wherein Mega Man could now hold down the B button to fire a stronger charged shot that could pulverize weaker enemies and inflict more damage to bosses. There were some cheap deaths in places and a few instances of spotty hit detection, but all in all Mega Man 4 proved to be another worthy Mega Man game for the ages. 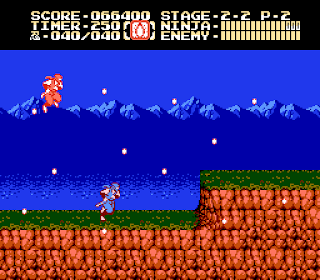 The followup to the smash hit Ninja Gaiden and in several ways its superior. Enemy respawning is a bit more manageable this time (they actually have to be offscreen now, not just close to the edge) and the hellish million-enemies-a-minute stages toward the end of the game are considerably less intense, though still very difficult. Best of all, though, you don't have to redo the entire final stage upon dying at the final gauntlet (though it still sends you back a fair distance). But by far the most well remembered feature is your new weapon - the shadow clones. Up to two of these guys can follow you and will mimic your every move and attack, albeit they will trail a bit behind you as you move around. When positioned properly they can be downright deadly, enabling you to rip through bosses in mere seconds while remaining relatively safe yourself. A clever feature to be sure, and it only makes it all the more impressive when skilled players give the game a run. Oh, and the music kicks ass too. 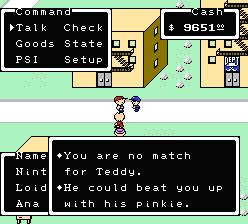 The predecessor to the legendary SNES RPG Earthbound, which was planned for a US release and even fully translated to that effect but ultimately never saw the light of day because it was deemed "unprofitable" in light of the SNES' release. Which is a shame, as it's a fun game with some quirky atmosphere and design. Unlike many RPGs of the time, this one was set in a modern era, complete with modern weapons like baseball bats, frying pans and yo-yos and psychic powers in lieu of magic spells. Even the enemies are a clever subversion, featuring aliens, runaway trucks, stray animals and yes, even crazed hippies. While it does have a few faults that prevent it from joining the ranks of other top-tier RPGs (most notably an unreasonable encounter rate and some very steep fluctuations in enemy difficulty), it is at the very least an unforgettable and unique experience. Plus it did spawn two other fantastic titles in Earthbound and Mother 3, so hey, take the good with the bad and enjoy this overlooked gem.