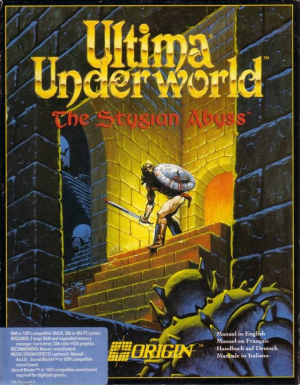 The Ultima franchise had a second spinoff in the early 1990s.  That was Ultima Underworld, a game which sought to provide a first person dungeon crawl with a revolutionary (for the time) 3D engine and incorporate a lot of "simulation" elements into the gameplay as well.  To this end, the game features a surprisingly intricate skill system, with skills for even mundane elements like swimming, lock picking, spell casting and individual weapons.  The magic system was also reworked, utilizing rune stones and keywords in lieu of a reagent system.  Not to mention a surprisingly complex control system that allows, among other things, crouching, laying prone, leaping pits, leaning from side to side and even levitating, flying and swimming.  It even has an auto-map and a note-taking feature on said map.  Pretty ambitious for a 1992 game, though as a result of its cumbersome interface and control setup, it's a bit of a chore to play today...

The basic plot concerns the Avatar being suddenly recalled to Britannia one night, only to find that he was apparently deceived by some greater force in order to be framed for the kidnapping of a lord's daughter and sealed within the Stygian Abyss.  Within the Abyss, he discovers the ruins of a failed colony devoted to the eight Virtues, as well as the plot of a mad wizard to summon a great demon known as the "Slasher of Veils."

The game was a critical success and served as a template for numerous other franchises, with its engine being reused in the original System Shock and the game's open-ended design serving as a primary inspiration for the Elder Scrolls franchise, both of which have since gone on to become legendary titles in their own right.

Ultima Underworld was the only Ultima game to be ported to the Playstation, albeit as a Japanese exclusive.  Released in 1997 (five years after the PC version), it's a relatively faithful port, though it suffers from a very convoluted control setup (all of the control features are present, just remapped to a PSX controller).  A few extra features are also included like 3D-modeled enemies, added sound effects and reworked music, and redone cutscenes with more dialogue. 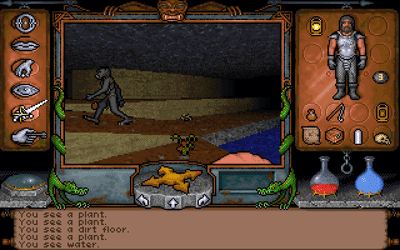 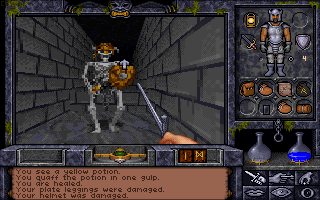