When you need a lazy way to separate the party for a pointless diversion, just have them fall half a mile into a flower patch/dumpster/stone floor/water trap (because falling from any distance is fine as long as you hit water!).  They won't even be any worse off for it!  Ugh.

11. Pointless collectibles
I know we live in the age of "achievements" and "gamer score", but fuck these things.  "Hur hur go around and pick up Arbitrary Objects hidden in obscure places by examining every single object throughout the game world so we can add another 15 hours of gameplay with no real effort!  It's not fun, it's not challenging, and most of the time you don't even get any tangible reward from it - it's just busywork so you can add another millimeter to your e-penis.

10. Character Amnesia
How do you make it so you don't have to write a character a personality and can drop a big "you're really the villain / the key to the world's salvation or destruction" bomb later on?  With amnesia, of course!  It's so fucking overused and needs to die already...

9. Unskippable cutscenes
Hey, that's great that you spent $40 million on an uncompressed HD bit of footage that plays every single time I want to replay your game.  But I've seen it already, and frankly it got a little old after the first time.  Can I skip it now?

8. Trite "daddy issue" subplots
Because that's what I want to see in an epic world-spanning quest that could determine the fate of the entire universe - petty family issues!  If I want an episode of Oprah, I'll pay for basic cable again.  If I want a character arc, I can certainly find a more interesting one than relying on trite crap like this (see: any given subplot in Persona or Baldur's Gate or even Xenosaga).

7. Stealth segments
Because when you've just punched, kicked, sworded and bulleted your way through thousands of guards without even breaking a sweat, it's somehow now imperative that you get through here without even being seen!  And guess what the penalty for failure is?  ...Nothing, really, you just go back to the beginning of the current room to try again.  More tedious trial and error I don't need.  Get rid of it.

6. Guide-based gameplay
You know exactly what I mean.  Games where you can't advance unless you know where and when every single secret is, and the only way to do that is have a walkthrough or $30 game guide next to you at all times.  Fuck that shit.  If I want to figure out something as esoteric as UNIX, I'll do just that; at least that has some useful application in real life.  Video games are where I go when I want to enjoy myself, not restart and reload old saves every ten minutes, or scrap my save and restart from scratch after 30+ hours, because of one small mistake. 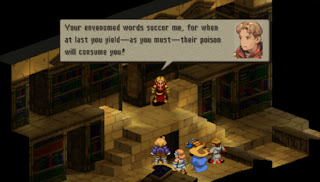 Hey guys, guess what?  Nobody ever talks like this, save for pretentious assholes who think that owning a thesaurus and using it eight times per sentence is a clever way to cover up their own ignorance.  Nothing takes me out of a story faster than a cast comprised entirely of wannabe Shakespeares...

4. Quest list gameplay
Just about the quickest way to kill my enthusiasm for any RPG is to trivialize the whole thing into a big checklist where it's a complete crapshoot as to whether the next task will advance the story at all or just be another bit of tedious busywork.  Even moreso if the first one is just "go kill rats in a cellar";  Fuck off and think of something interesting or challenging to do than falling back on that braindead bit of design.  You can spare me the lame old excuse of "well it's old school" too, because guess what?  That's just a tired excuse to never think of any new ideas.  Speaking of...

3. Pandering with 8-bit graphics and music to cover up a mediocre product
Yes, I grew up in the 8 and 16 bit era, and many of its games are still among my all-time favorites.  But guess what?  Adding 8 bit graphics, four channel music and dated gameplay tropes doesn't bring back 'nostalgic memories' of those games; it just makes you look like a pandering hack.  Swiping old ideas and putting a "retro" coat of paint on them so you never have to come up with anything new or interesting might earn you sales, but it's only going to get you so far when your game is just another boring piece of crap where all you do is traverse bland, uninspired levels and jump on the same three enemies over and over again.  There's a good reason 70% of NES and SNES games are all but unknown nowadays, and it's not because of the younger audience playing games now - it's because said games were mediocre and uninteresting.  I mean hell, do you remember King's Knight or Awesome Possum or Arkista's Ring or the Yogi Bear game nowadays?  No, and that's because those games were crap.  Knock off the pandering and make some gameplay that isn't instantly forgettable - that's how you get ahead.

2. Walk around and talk to everyone and click on everything fucking ad nauseum
Because when you're too lazy to code in a cutscene, having the player walk around and click on everything and talk to everyone over and over in one big guessing game is the way to go!  WRONG!  It's tedious, stupid and frustrating, and the fact that games are still doing this shit in 2014 serves as a reminder that game design philosophy has a long fucking way to go.  Have a little respect for your audience's intelligence and patience, that's all I'm asking.

1. "Real ending" DLC
What's that?  People are claiming that your game's shitty ending was a lame cop-out and that you're a hack for making them sit through three games and $50 worth of DLC (which added a whopping two hours of gameplay overall) just to get a shitty conclusion that doesn't satisfy on any level?  Well lucky you, we can just patch in another shitty, one-size-fits-all ending and call it good!  And all it's going to require you to do is pay more money to fight some nigh-impossible uberboss before you get the privilege of seeing the ending we, quote unquote, "Meant to create in the first place but couldn't due to deadlines hubris".  Stay classy, boys.  No wait, go bankrupt and drop out of the industry before you set more bad precedents.