In the 80s, there were two major players in the adventure game genre: Sierra (best known for King's Quest, Police Quest, Quest for Glory, etc) and a little studio called "Lucasarts" which became famous for a few IPs of their own.  Sierra's games became notorious for their high difficulty level and unforgiving puzzles while Lucasarts took a different philosophy, having few to no player deaths (or unwinnable states) and a quirky sense of humor throughout. 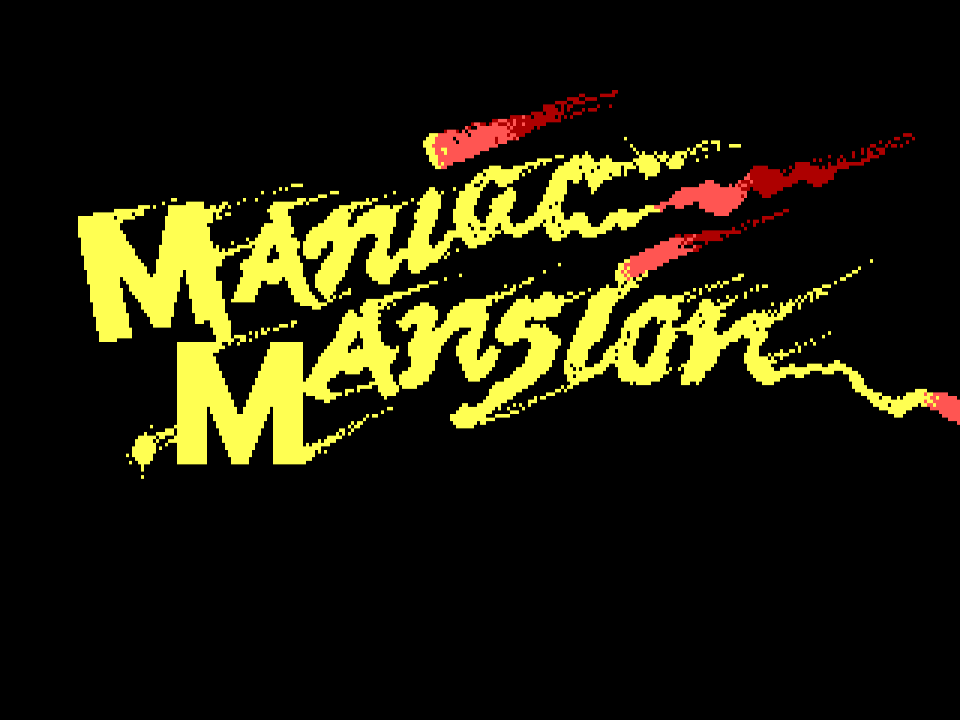 Case in point, Maniac Mansion was one of the first adventure games to be released by Lucasarts, and highlights several of the key differences between the two companies, as well as a few other ideas that few (if any) adventure games have replicated over the years.  It's also attained a cult following for its unorthodox design and replayability owing to its multiple endings (eleven in total, to be exact). 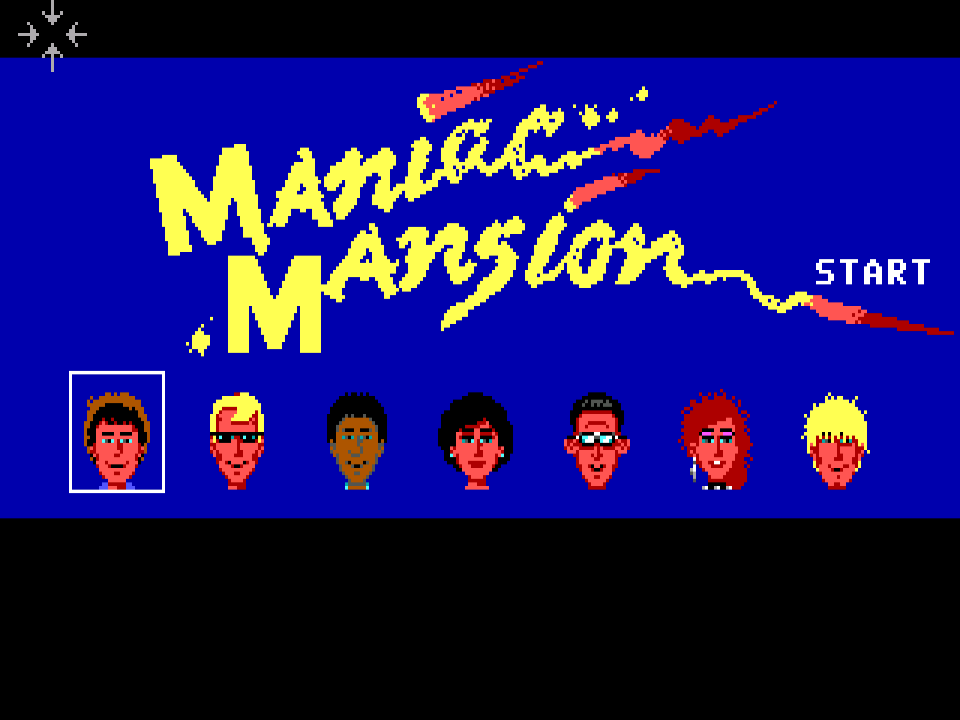 For one, the game actually features multiple playable characters.  Besides Dave (the organizer of the rescue mission in-game), you pick two other characters to play through the game with.  While the end goal is the same regardless of which team you pick, you will have to take a different approach to some puzzles and skip some in favor of others depending on who you select.  Let's take a look at all seven of them.


From left to right:

Dave - The game's protagonist who recruits two other kids to rescue his girlfiend Sandy from the clutches of the mad scientist Dr. Fred.  Dave unfortunately has no special abilities to distinguish him from the rest of the cast.

Syd - A musician who can play the piano like nobody's business.  He can also microwave the hamster if you're feeling particularly cruel (or just want to see a rather humorous death scene).

Michael - A photographer, and as such he's also versed in the art of developing film.

Wendy - A novelist looking for a big break.  If you ever find something in need of rewriting, she's the one to go to.

Bernard - Your 80's vision of the stereotypical nerd, with taped glasses, pocket protector and all.  That does work in his favor by allowing him to fix the radio or the phone, but on the down side, he is afraid of the Green Tentacle.

Razor - Another band member, this time the lead singer of the band "Razor and the Scummettes."  Functionally the same as Syd, which means she can also nuke the hamster and play the piano.

Jeff - A surfer dude whose only special skill is the ability to fix the phone.  The hint poster packaged in with the game implies that he gains temporary psychic powers when he sustains an electric shock, but this doesn't seem to actually be implemented in the game at all.  As such, he's the only character besides Dave who doesn't have a way to get past one of the major puzzles in the game.


Once you've made your choice, you begin the game outside the mansion. 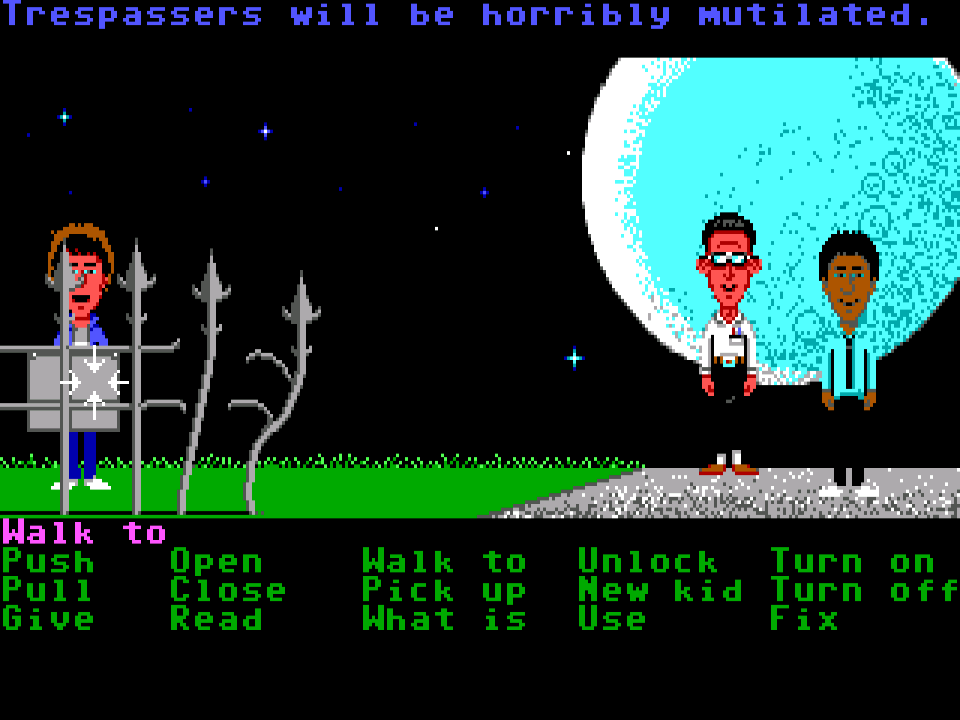 Despite that foreboading warning, though, there are relatively few ways to die in the game (and you usually have to be pretty foolish to find them).  You generally have a higher chance of getting stuck in an unwinnable state due to wasting a key item than you do getting killed.  Save often!

In any case, your first puzzle is pretty mundane. 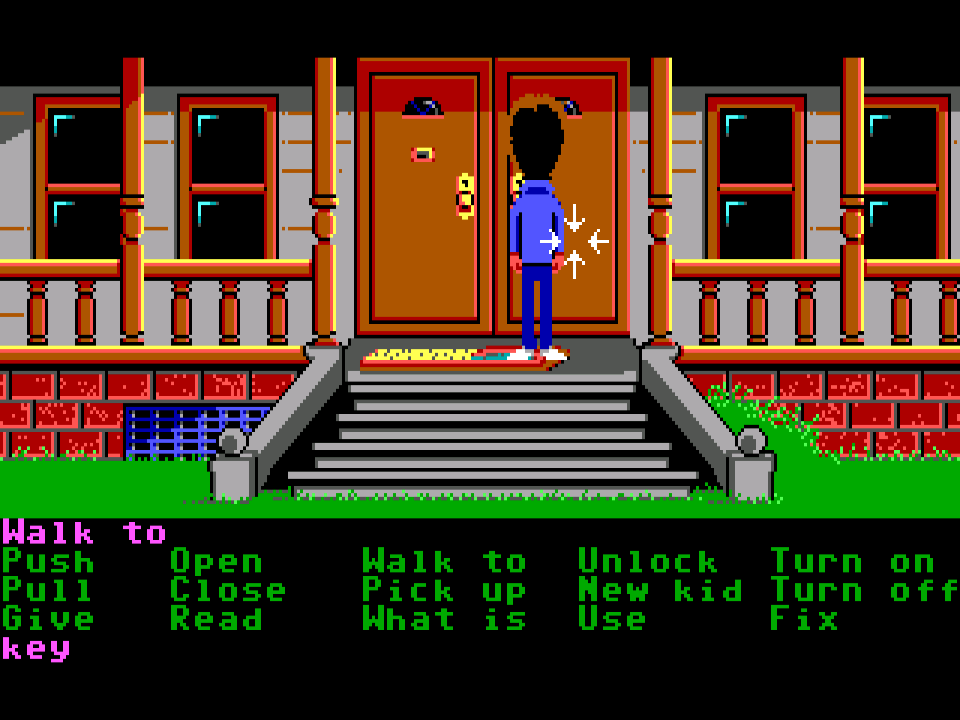 There's a small red herring in the form of a grate behind some bushes, but that won't get us inside.  In fact, none of your characters can even budge it since they're not strong enough to move it.  Keep it in mind, though, as you may need to come back later!

The real solution here is to search under the doormat for a key, then use the key to unlock the front door.  Pretty simple. 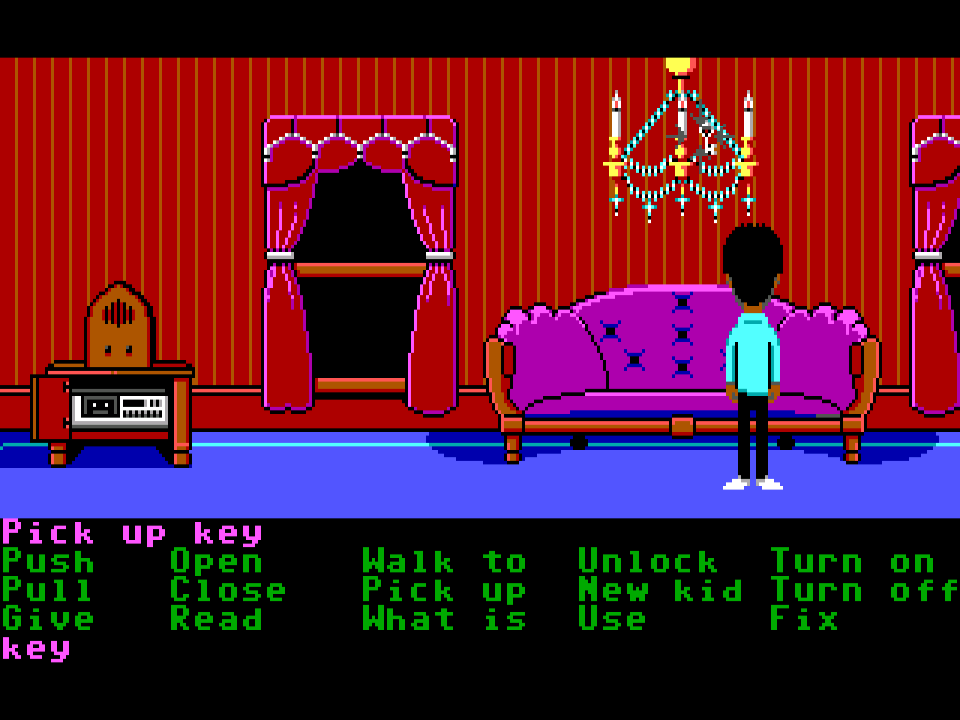 From here, you have access to the first floor, including a library, a living room and the kitchen (which you'll want to avoid at first, as Nurse Edna is in there waiting to capture you and throw you in the dungeon).  Some searching in the living room reveals a key on a chandelier you can't quite reach, as well as a radio (complete with an old tube inside) and a cassette tape player.  Because it's the 80s! 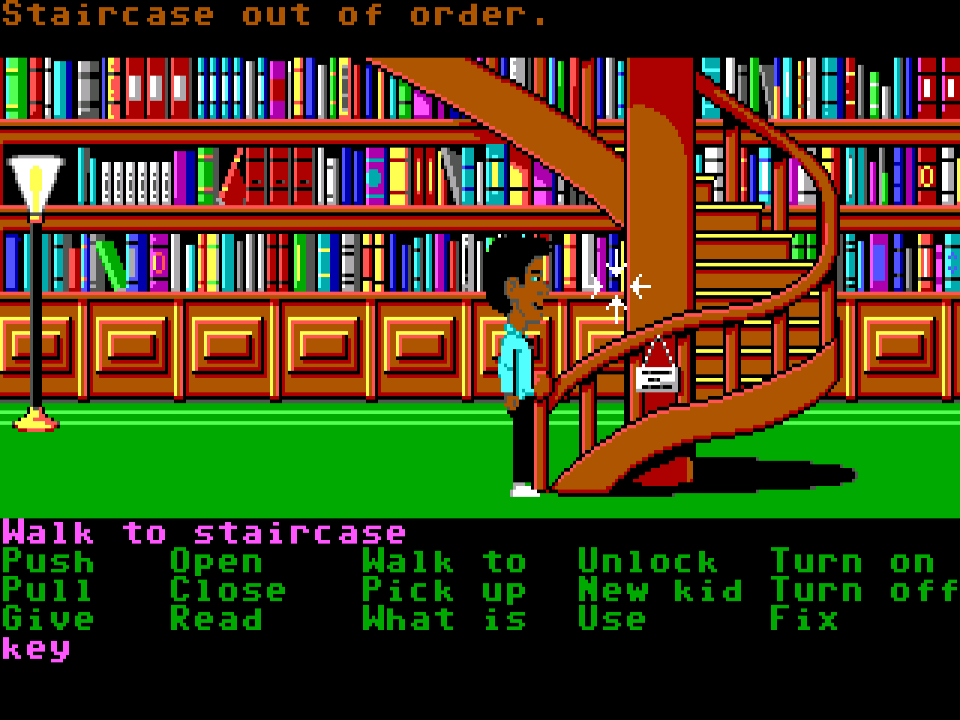 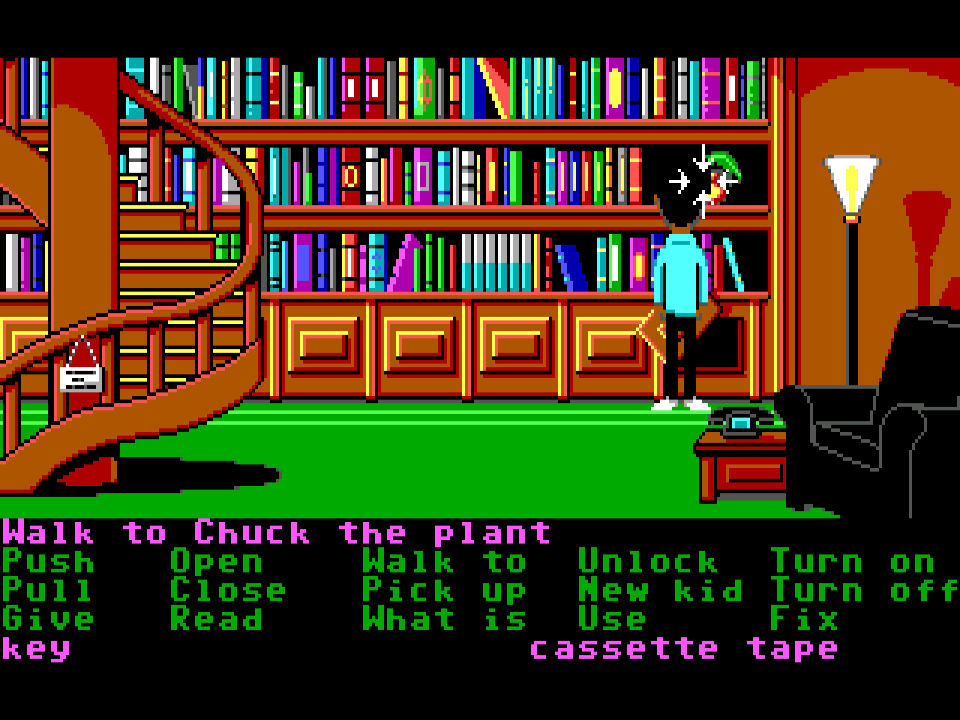 The library reveals two of the game's most famous red herrings.  The "out of order" staircase that doesn't lead anywhere (and cannot be fixed) and of course "Chuck the Plant", a recurring gag in many Lucasarts games.  It never serves any practical purpose; it's just a strangely-named plant positioned somewhere in the game.

There's also a cassette tape hidden in a loose wall panel and a broken phone, which both lend themselves to later puzzles.

After a few minutes have passed, we can explore the kitchen, which reveals a couple of grisly sights. 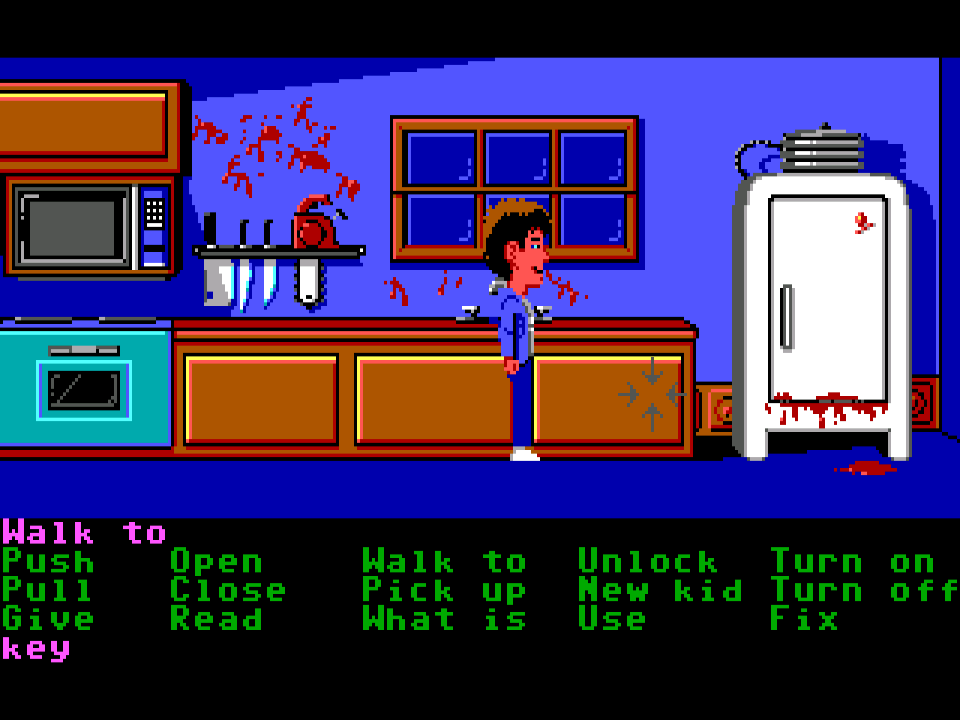 Looks pretty gruesome, but closer examination just reveals some broken ketchup bottles in the fridge.  The knives are also glued to the wall and the chainsaw has no gas, so neither can be used as a weapon (though as a gag, a canister of gas can be found in another Lucasarts game, "Zak McCracken and the Alien Mindbenders). 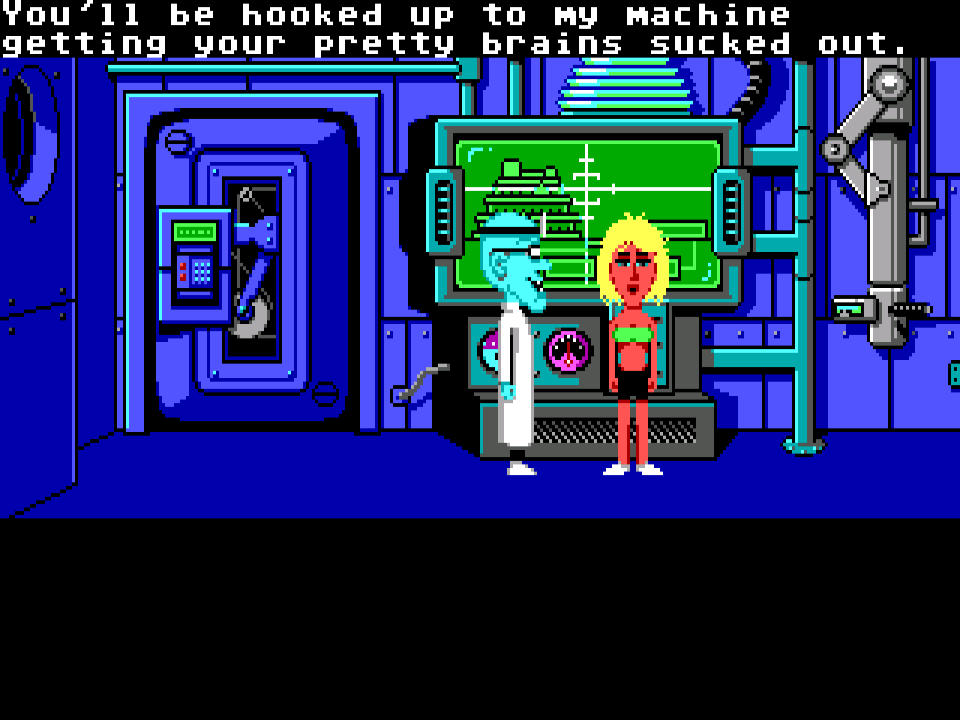 The inhabitants of the house are not idle, however.  Periodically you'll get a cutaway showing events going on elsewhere in the mansion.  The first one you're likely to see involves Dr. Fred speaking to Sandy about the fate that awaits her at the hands of his "Zom-B-Matic" machine.

The most active member of the family is "Weird Ed", who awaits a package of unknown contents to launch a plan against his father's schemes.  Being a paranoid militaristic type, he's also highly suspicious of you and will throw you in the dungeon on sight, though you can win his trust if you help him with his schemes. (Woe to you if you try to mess with his hamster or his piggy bank, though.) 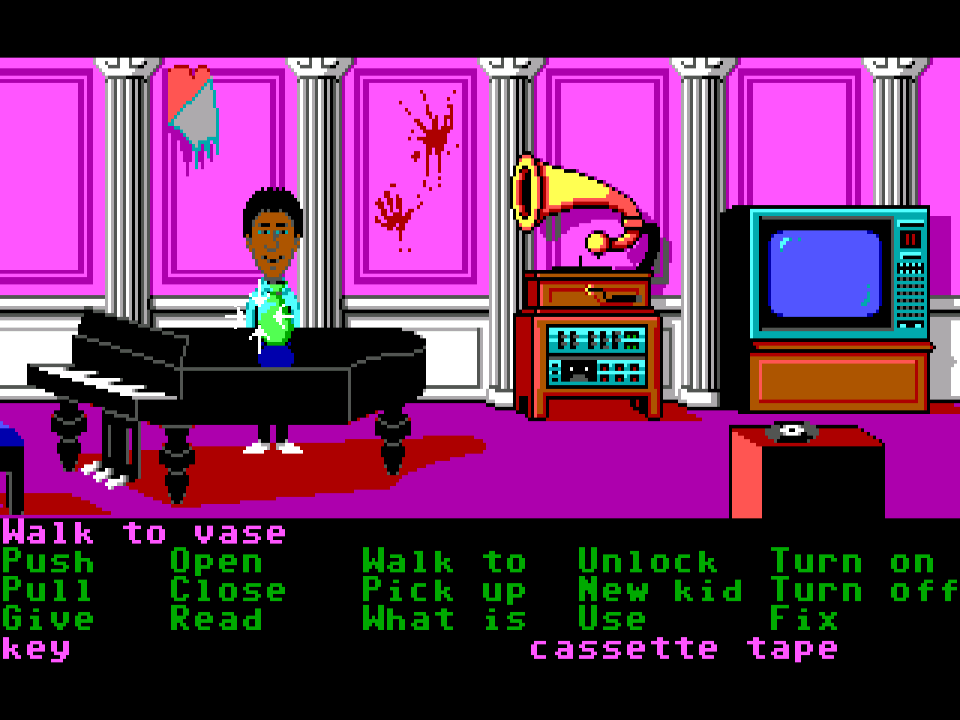 Searching upstairs reveals an art studio and a music room with a piano, a victrola and a tape recorder, as well as a TV which gives a clue important to several characters. 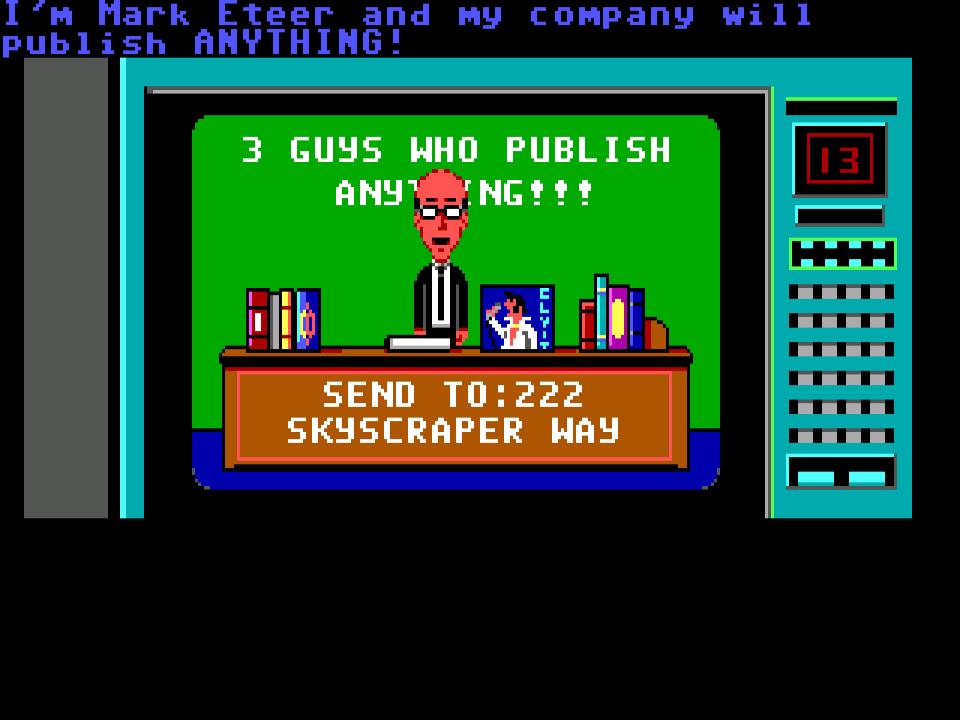 Yep.  But we'll need an envelope and some postage before we can take advantage of that... 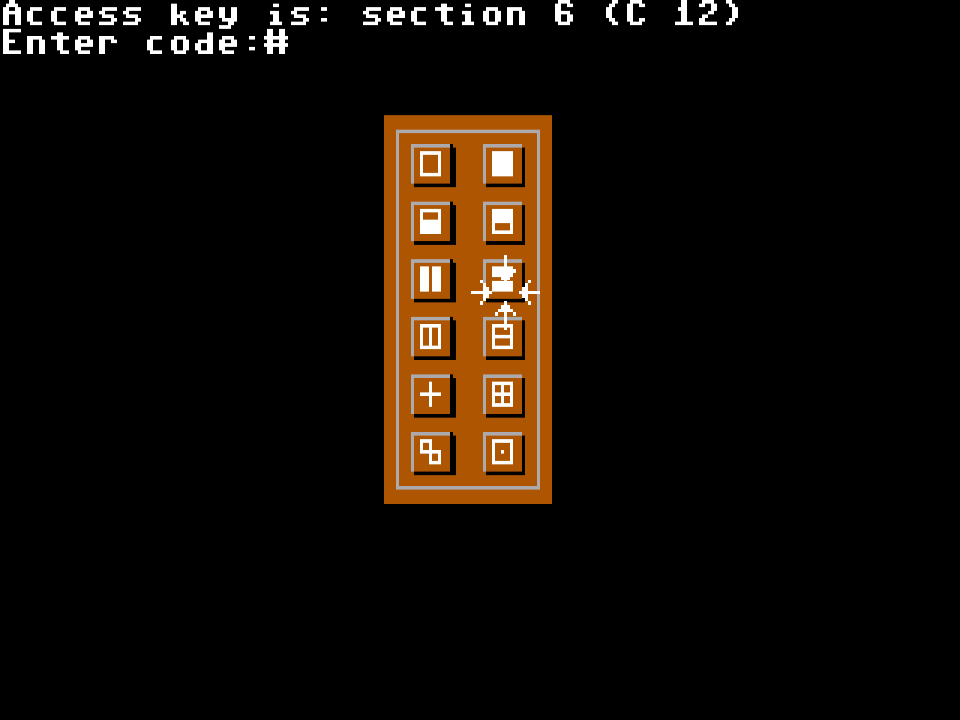 There is also a steel security door up here, which serves as a form of copy protection.  Hope you have the manual, because if you put in a wrong code.. 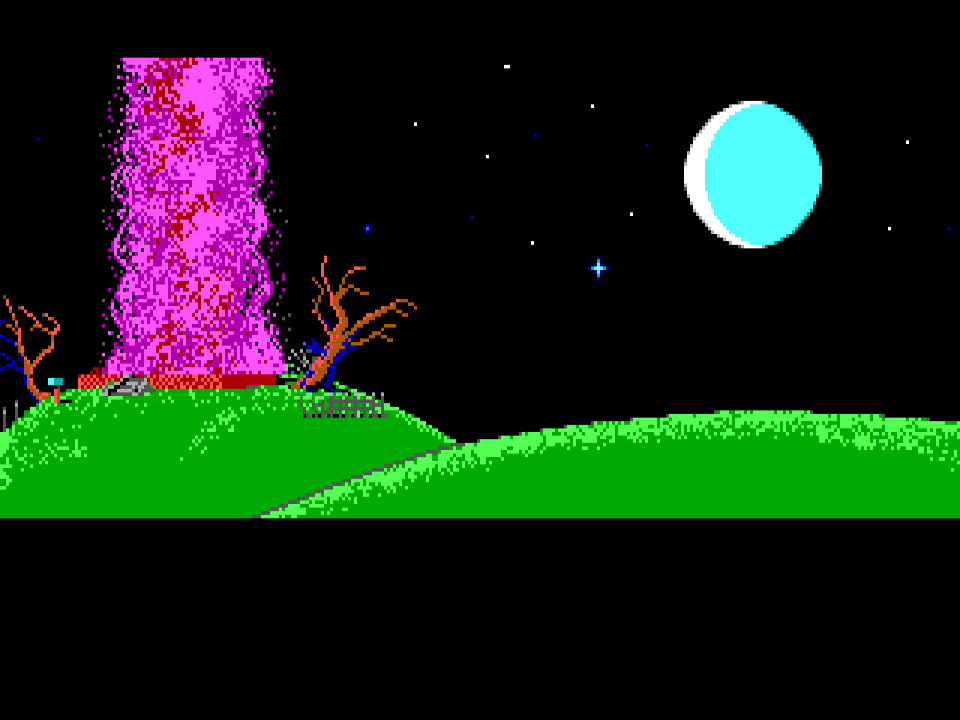 ...The nuclear reactor in the basement overloads and blows the house sky high.  Let this be a lesson to us all in home nuclear safety. 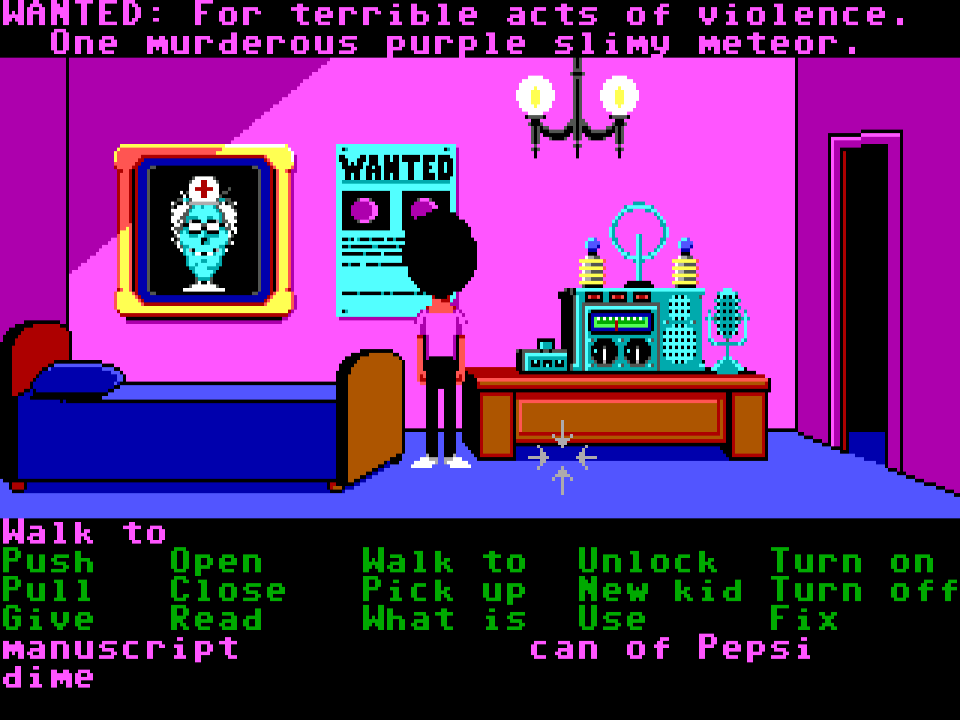 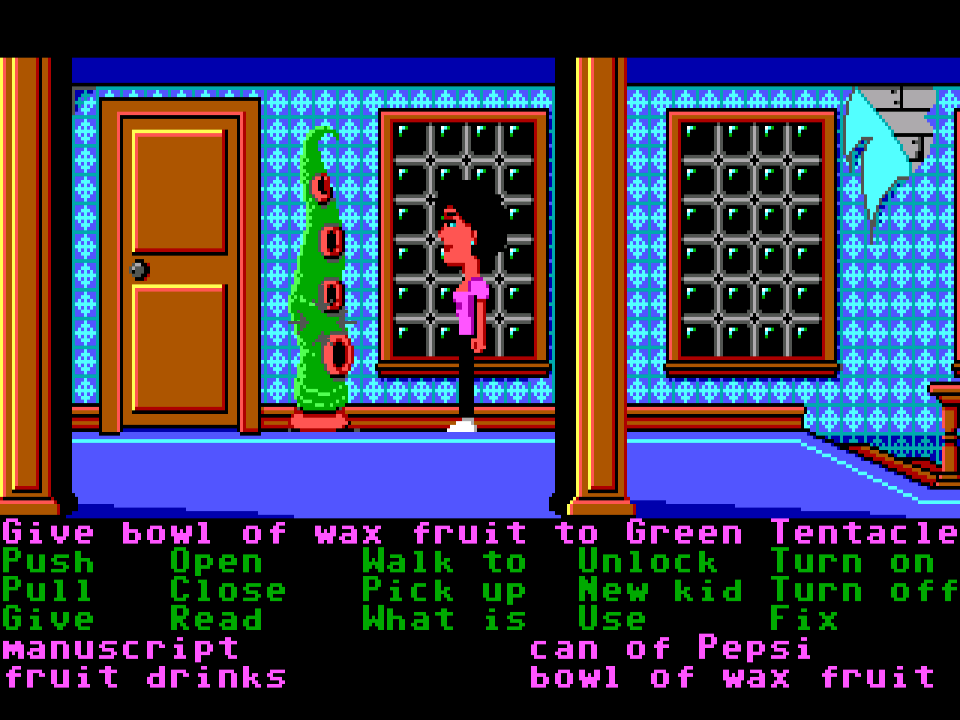 That's just the tip of the iceberg for Maniac Mansion, but it gives you a good idea of what to expect - a game with plenty of silly humor atop a B-movie styled plot about a mad scientist trying to turn kids into zombies.  As well as a murderous purple slimy meteor, a sentient green tentacle who dreams of forming a band, and a mummified "Cousin Ted", among other silly elements.  The fact that the game offers a different set of puzzles depending upon your choice of characters also lends it some considerable replayability, and the eleven different endings that freedom of choice provides also gives plenty of reason to keep coming back.

The game did have a few different versions, mostly unremarkable ports to other home computer formats of the time (including the Atari ST, Amiga, Commodore and Apple II).  It also received an enhanced DOS port that improved the visuals and sound quality dramatically, which is what I've pictured in this review; for comparison, here's what the original version looked like. 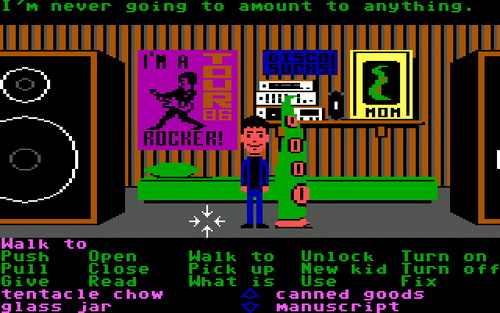 Probably the best known version, however, is the NES release, which featured some of the most detailed and interesting music on the platform.  However, it also underwent censorship for some of its more questionable language and content, though ironically the blood on the kitchen wall and the hamster-exploding event remained untouched (in the US version at least).

Regardless of which version you play, though, Maniac Mansion is a classic game, introducing the world to Lucasarts' unique brand of humor and relatively forgiving style of gameplay compared to most adventure games of the time.  The fact that it features numerous solutions to each of the major puzzles and endings also give it some considerable replayability that few other games in the genre possess.

The franchise also spawned a short-lived TV series (which has little connection to the game) and a single sequel released for DOS and Mac, which I will cover next week.