DOS Dungeon: Day of the Tentacle

The original Maniac Mansion became a cult favorite in its day for its open-ended setup and multiple endings that lent it some replay value.  It would also ensure that Lucasarts would become a name in the adventure game genre, allowing them to create games like Indiana Jones and the Fate of Atlantis, Full Throttle, Sam and Max Hit the Road, and the Monkey Island franchise.

As for Maniac Mansion itself, it would get a single sequel six years after the original was released. 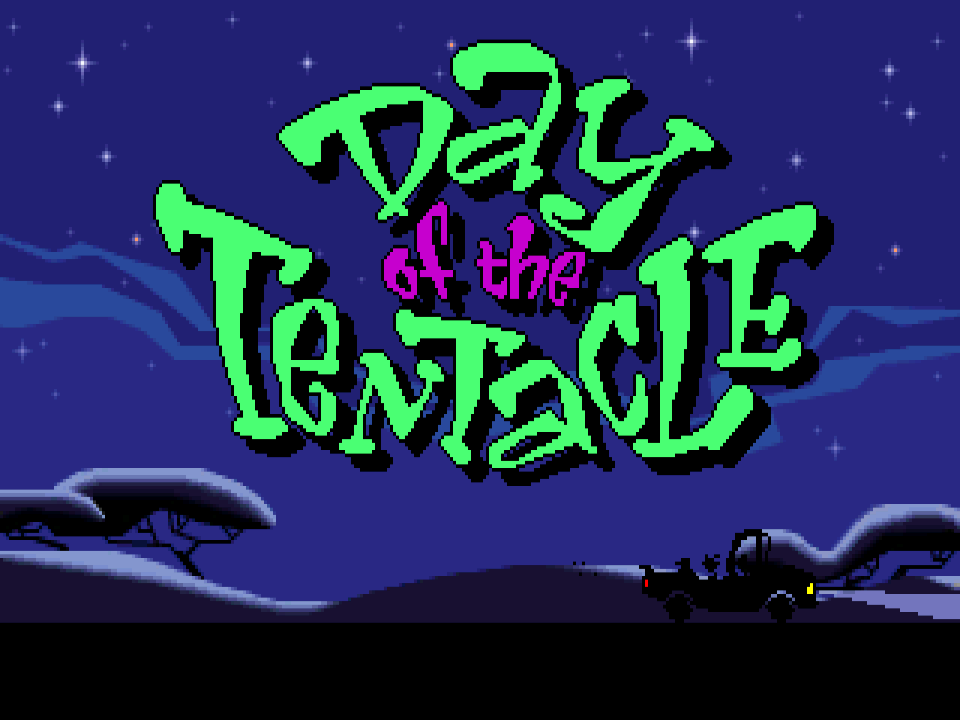 Set five years after the original game (har har), Day of the Tentacle took a slightly different approach to the story.  With the evil meteor's defeat at the end of the first game, they needed a new villain to take center stage. 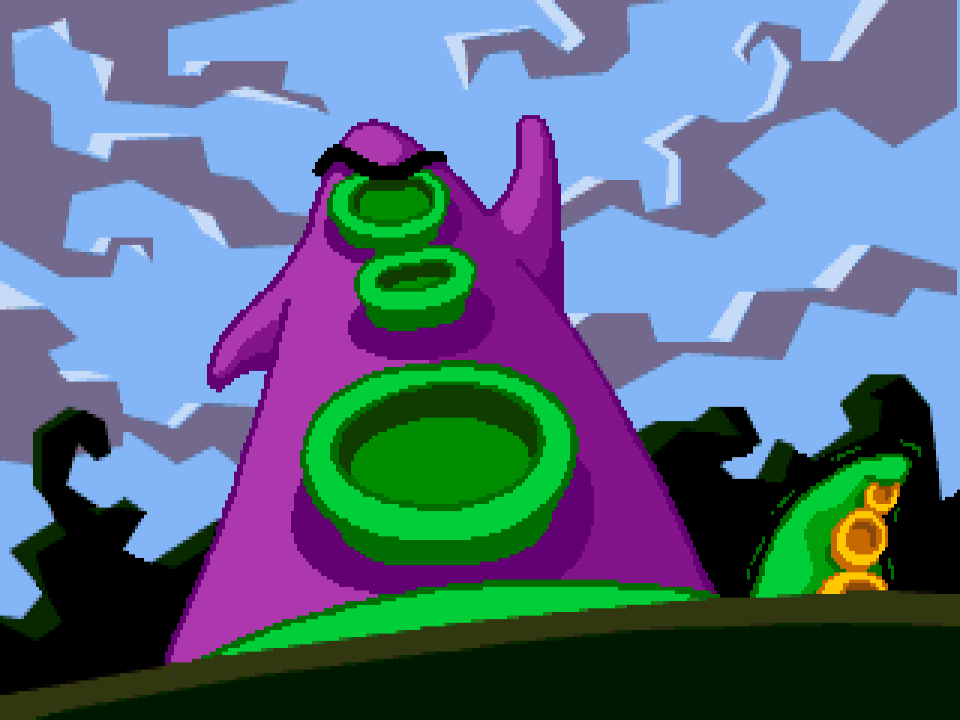 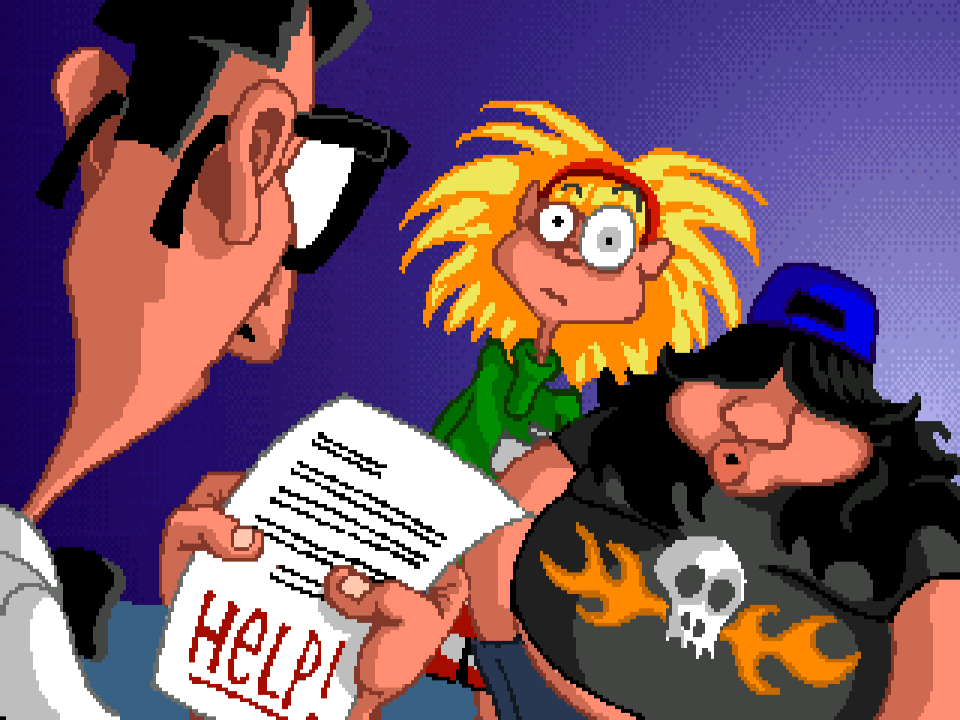 A newly-mutated Purple Tentacle (now with stubby arms and enhanced intelligence) declares that he will conquer the world, which results in both of the Tentacles being tied up and scheduled for destruction by Dr. Fred.  Green Tentacle sends a help message to Bernard (the only returning protagonist from the first game), and he and his roommates Hoagie and Laverne set out for the old mansion in an attempt to free them. 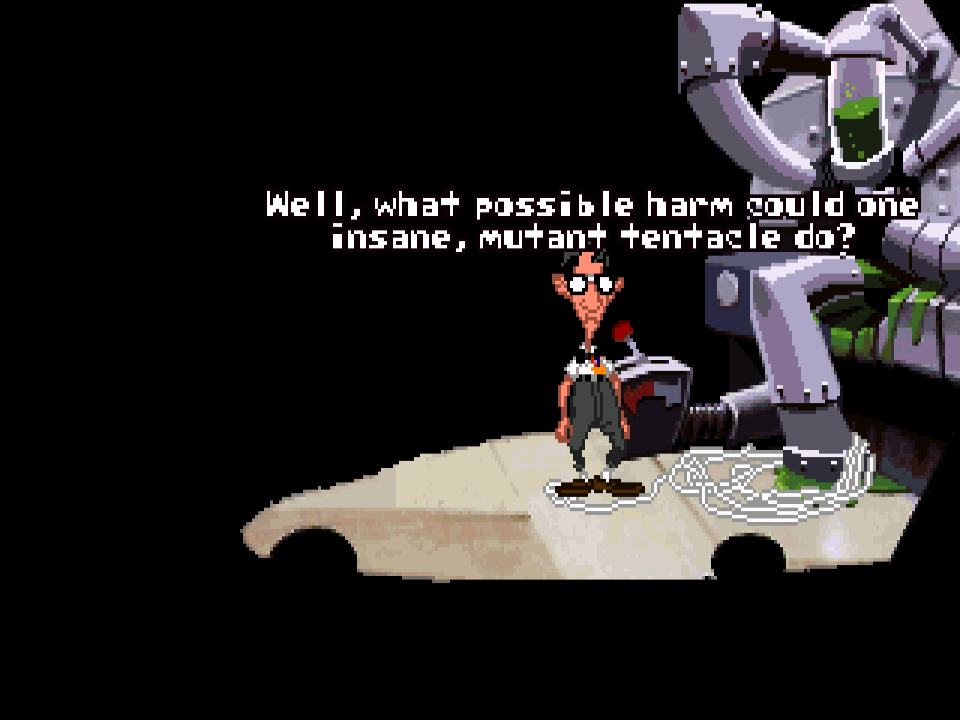 However, Bernard unwittingly frees the Purple Tentacle, allowing him to flee and resume his plans for world conquest.  As a secondary measure, Dr. Fred decides to have the group go back in time (via another invention of his, the Chron-o-John) and shut down his pollution machine to prevent the Purple Tentacle from mutating. 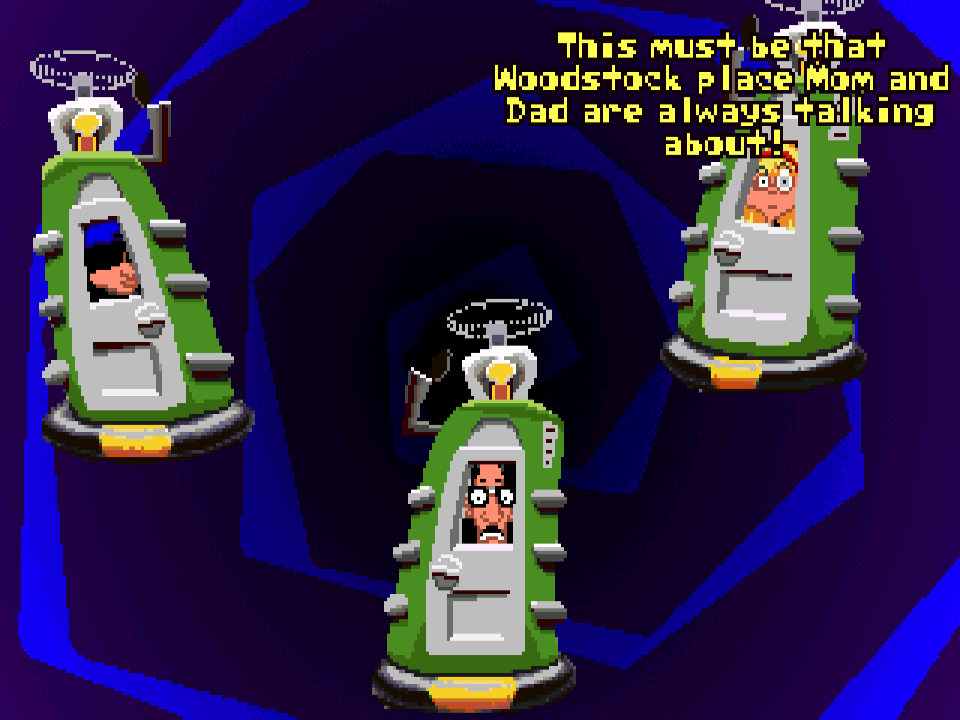 Of course, that doesn't work either, since he was using a fake diamond to power the machine.  As a result, Bernard is flung back to the present, Hoagie ends up 200 years in the past, and Laverne 200 years in the future, where the Purple Tentacle has succeeded in conquering the world.

The game begins here, with your group attempting to reunite in the present, secure a real gigantic diamond to power the time machine, and put an end to the Purple Tentacle's plans.  To do that, you'll have to frequently swap between characters and even pass items back and forth between them owing to another unique property of the Chron-o-John. 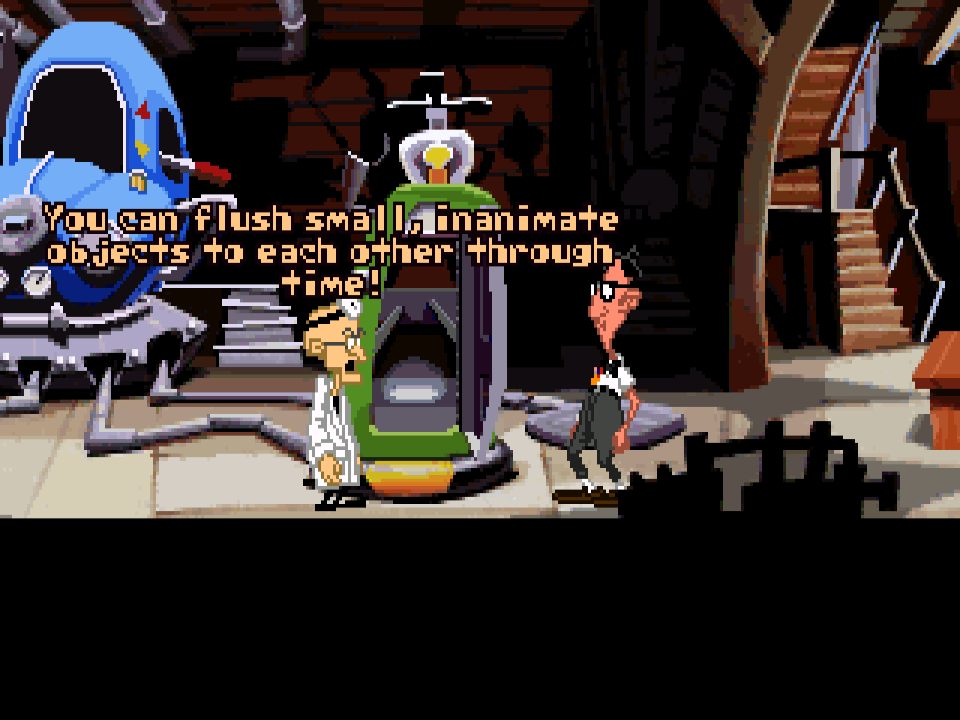 You can also save a bit of legwork by simply choosing the "Give" command and clicking on a character's portrait, so they don't have to constantly walk back and forth to the time machine every time you want to exchange items. 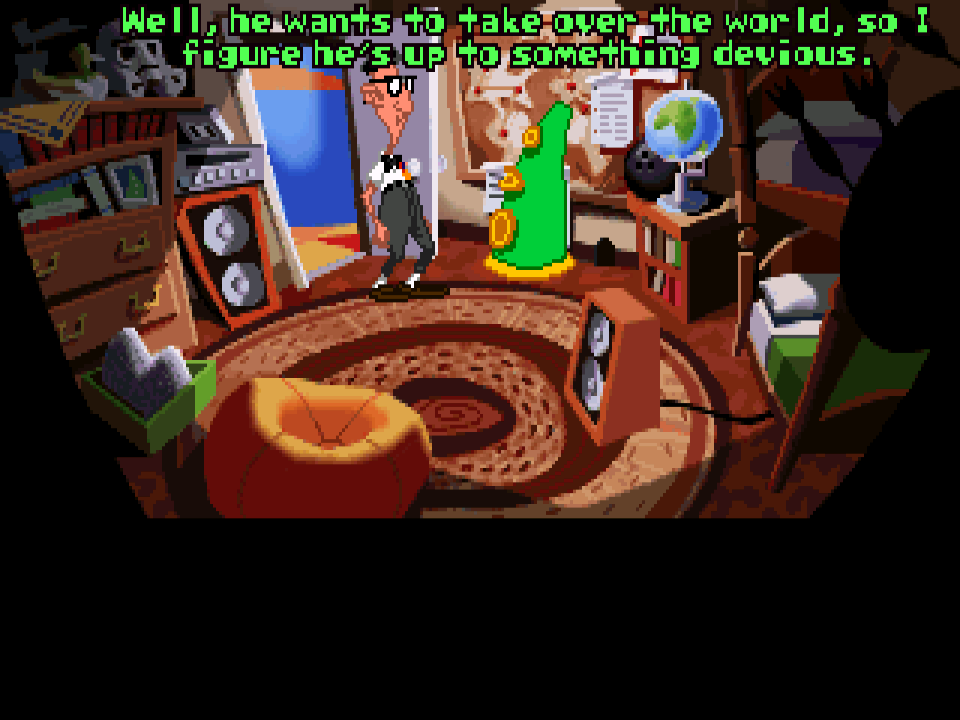 Another thing to note about the game is that it's very much modeled after later Lucasarts games like Monkey Island rather than the original Maniac Mansion.  Unlike that game, there is only one ending and not much variation in the pathway you take to reach it.  On the plus side, though, this does alsmo mean that there are no player deaths from mundane choices (like messing with the Security Door without the proper password), no unwinnable states, and virtually every item in the game has a purpose.  Even things like a single dime in a phone booth or a bottle of white-out all have a purpose somewhere, though you may have to do a bit of guesswork (and adapt to the game's brand of humor) to figure it out. 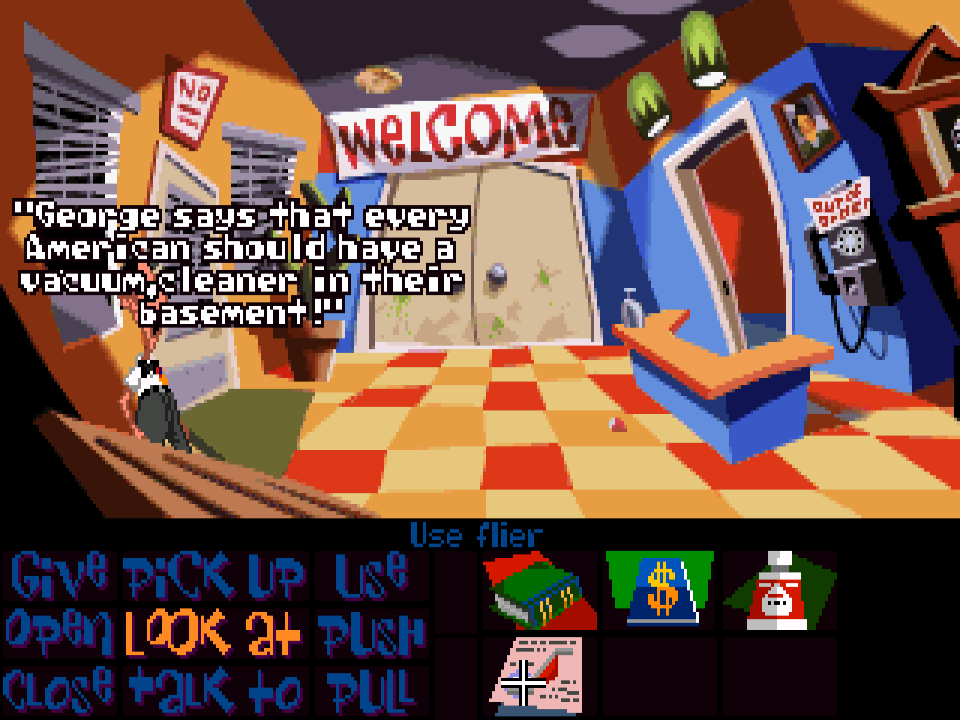 Of course, being a game involving time travel, the puzzles also tend to involve making changes in the past to alter the future.  As one example, you find a flier for a hardware store in the mansion's lobby in the present. 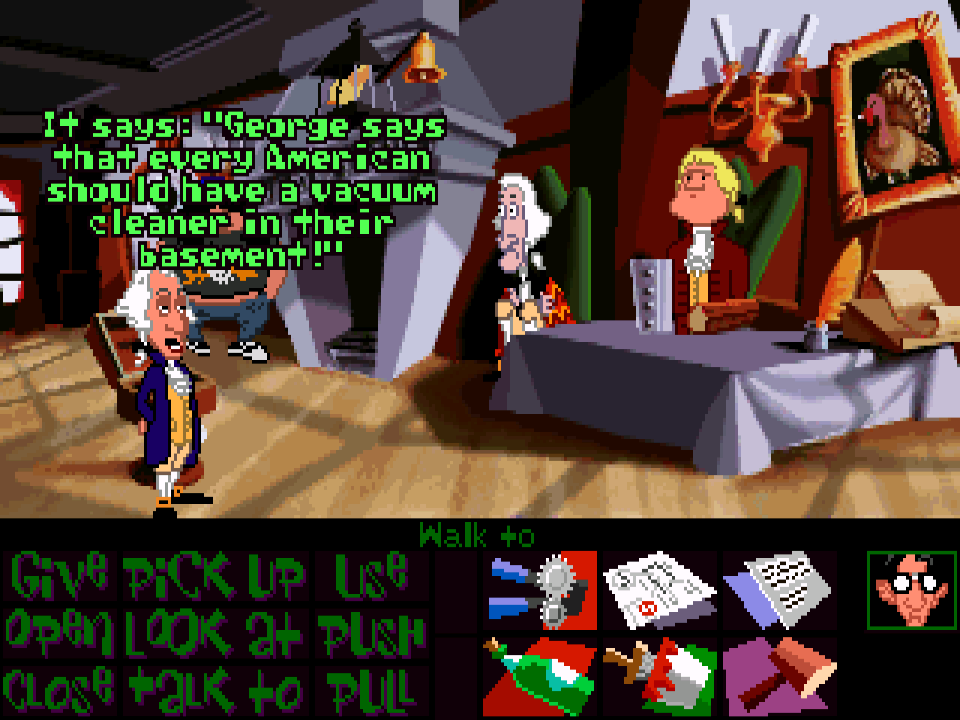 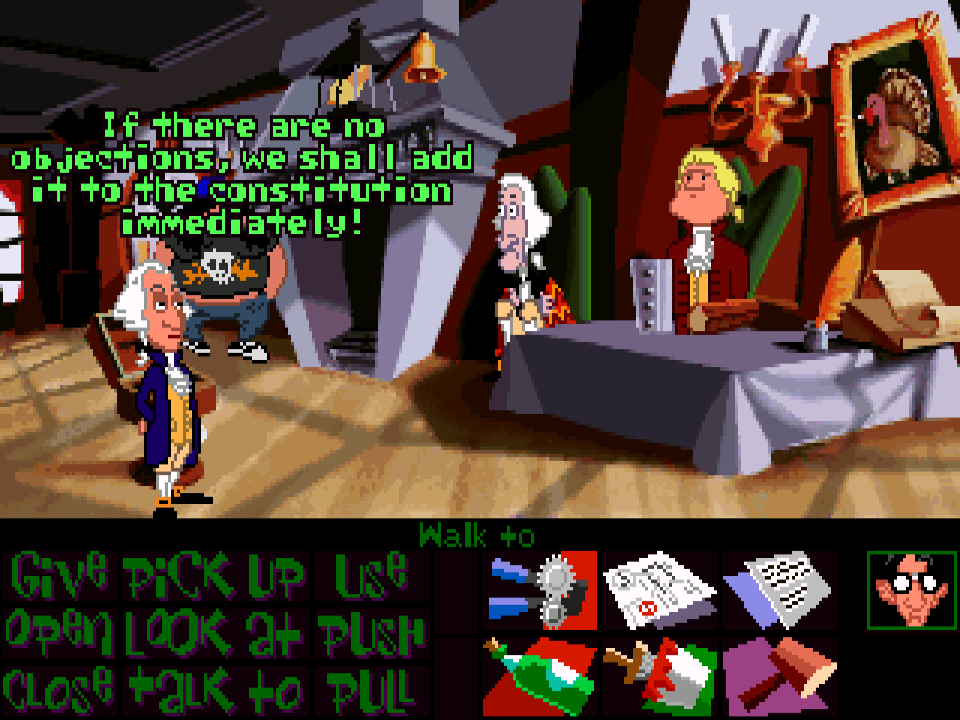 Giving that to Hoagie and having him drop it in the suggestion box at the drafting of the US Constitution results in it becoming a law.  This results in the appearance of a vacuum cleaner which Laverne can use in the future.  Fun stuff. 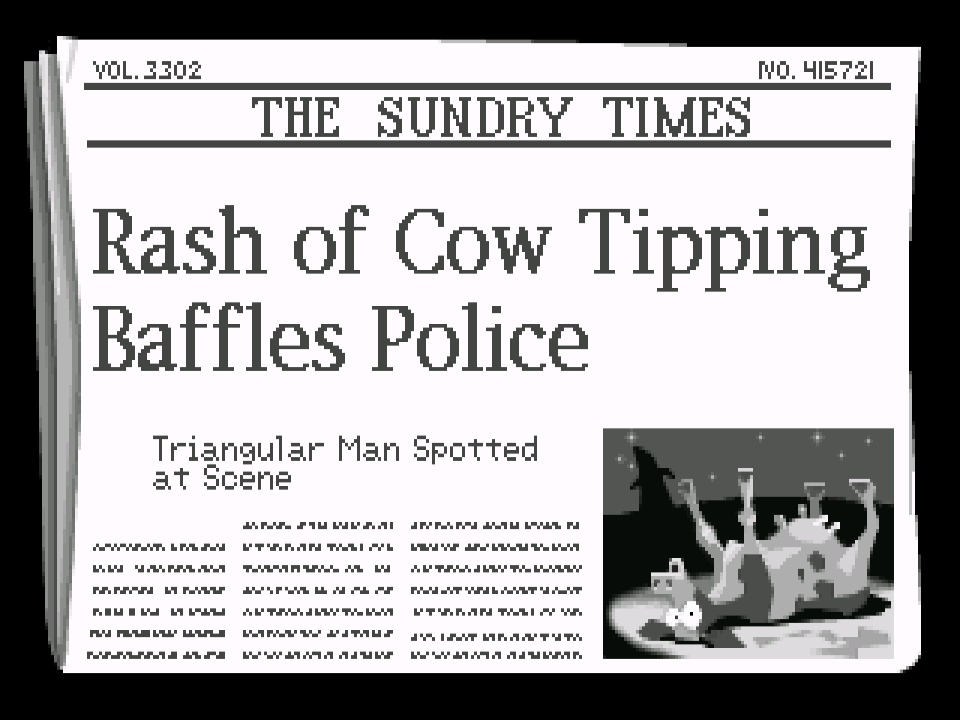 The game also benefits from Tim Schafer's distinct and irreverent charm, utilizing off-kilter visuals, exaggerated character designs and a quirky sense of humor throughout.  The CD version of the game also features surprisingly good voice acting for the era, which also lends itself well to the proceedings. 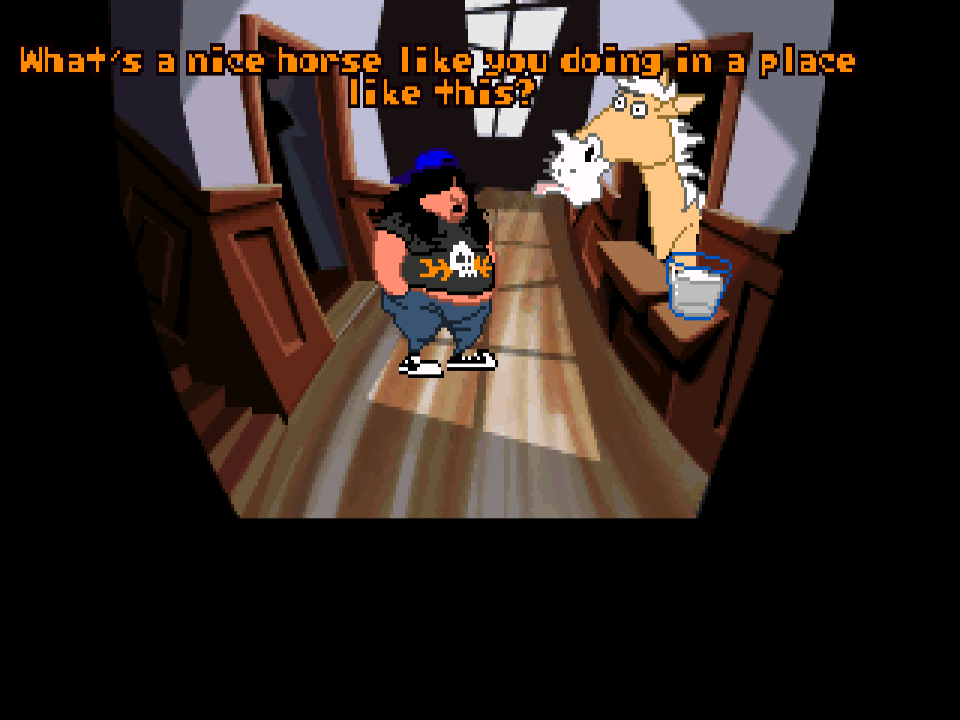 Unfortunately, neither of the Maniac Mansion games have seen a release since the 90s, so they're a bit hard to come by nowadays.  However, several of Lucasarts' games have recently seen releases on Steam and GOG, which implies that they may appear there in the future, barring some odd rights issues I'm not aware of.  Both games also run just fine in either DOSBox or ScummVM, so unlike a lot of older PC games, it's not an issue to play them on a modern system. 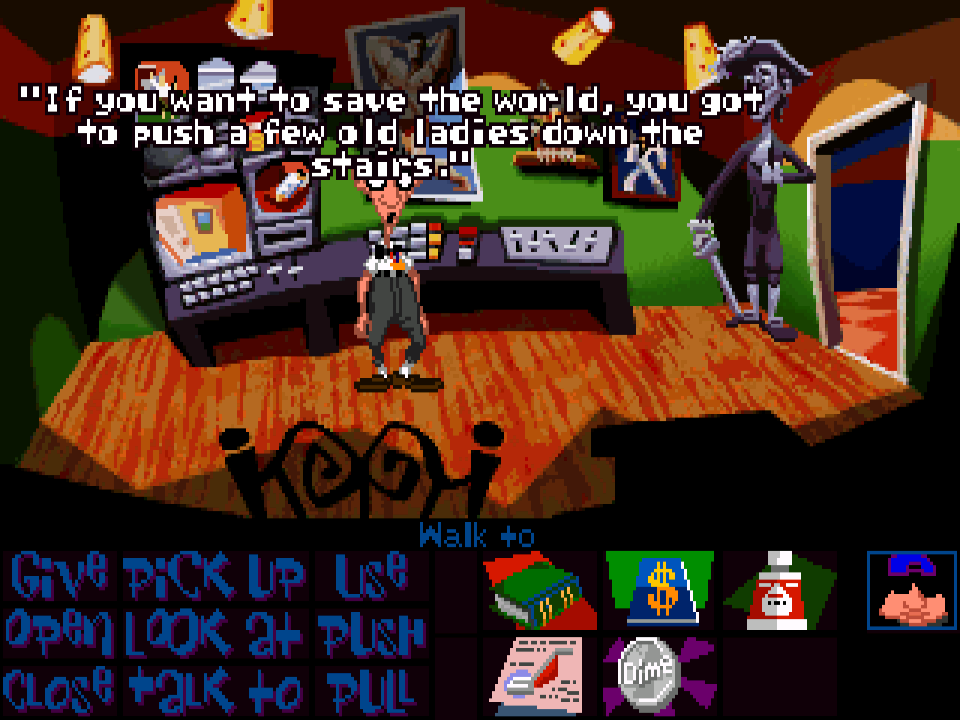