DOOM is a game which needs no introduction.  Not only was it one of the pioneering games of the first person shooter genre (which, if you haven't been paying attention to games for the last twenty years or so, is kinda, sorta wildly popular), but it was unparalleled in its time for its impeccable design; for 1994, DOOM sported amazingly high-quality 3D visuals and level designs that were a cut above everything else in realism.  Yet despite this, it retained a fast-paced, arcade-esque feel to its gameplay that makes it an absolute joy to play even today.  In short, it's a true classic. 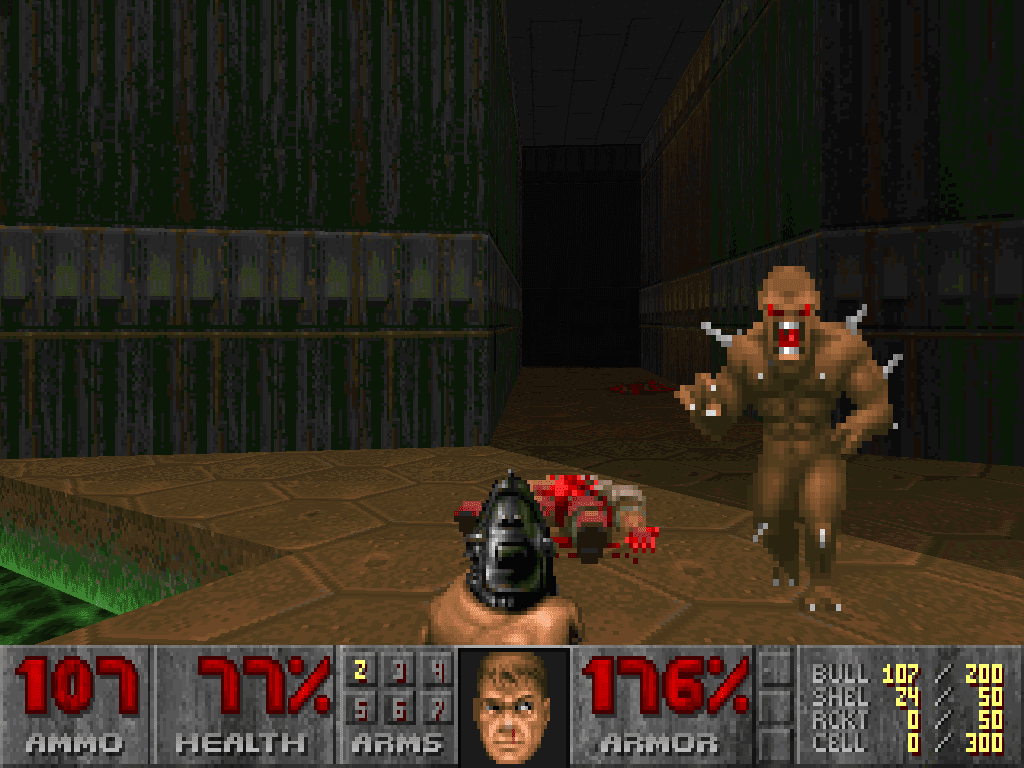 DOOM's premise is simple: It's the future, you're a space marine on Mars' moon Phobos, and demons have begun to escape from hell and go on a rampage, murdering everyone on the base.  As the only survivor of the attack, you're left to battle your way through their hordes and singlehandedly repel the invasion.

Not the deepest of stories, I will readily admit.  But the impeccable design of the game's environments makes it work; the levels actually look like a futuristic military base, with computer consoles, bulkhead doors, stairways and metallic floors and walls inlaid with switches and lights.  There were even windows and courtyards, giving you a view of the moon's surface and mountains in the distance.  It was quite a sight to behold for the 90s. 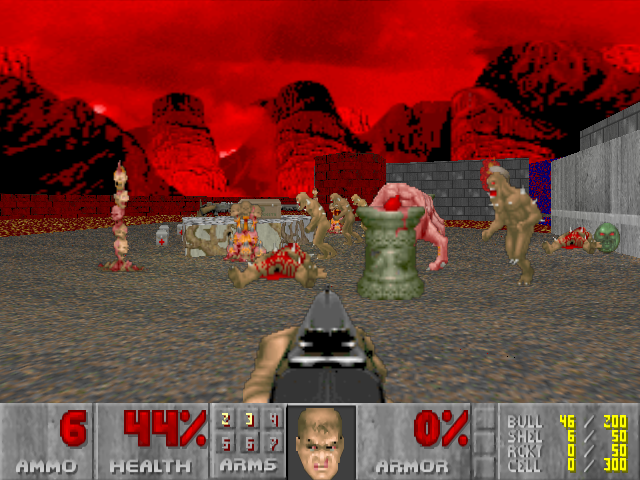 Of course, once you venture into hell, it takes on a much darker tone, with environments now composed of harsh brick buildings, decaying plants, a deep red sky and mountains and some gristly stage artifacts like skulls on poles and deceased soldiers hanging from meat hooks (some still twitching).  Not to mention the requisite devilish imagery one would expect from such a place - decorations of pentagrams and goat-horned and hooved men abound.  Pretty dark stuff for 1994.

Despite its realistic aesthetic, though, Doom is still a video game though and through.  You'll be hunting for keycards and flipping switches to unlock doors, as well as finding hidden secrets littered throughout every stage.  Some of these are fairly obvious (mismatched wall textures, switches which open distant doors on a short time limit), while others you'd be hard pressed to find without a guide (such as one in the first stage which only opens as you approach the exit switch to the level).  Each episode even has an entire hidden stage or two for the especially observant secret hunter, which lent itself to cameos from Wolfenstein soldiers and even Commander Keen in the sequel.

Your enemies are also just as devilish as you'd expect.  In addition to a small army of your fellow marines raised as undead murder machines, you've got fire-throwing imps, demons (both visible and cloaked varieties), flying burning skulls that bite you and of course, the game's most iconic monster, the Cacodemon.  A spherical creature with horns, one eye and a huge mouth full of sharp teeth that belches lightning at you. 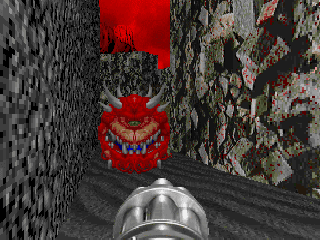 They do go down surprisingly easily to a chainsaw, though

The occasional boss crops up as well, and these guys can take an absurd amount of punishment before they go down... 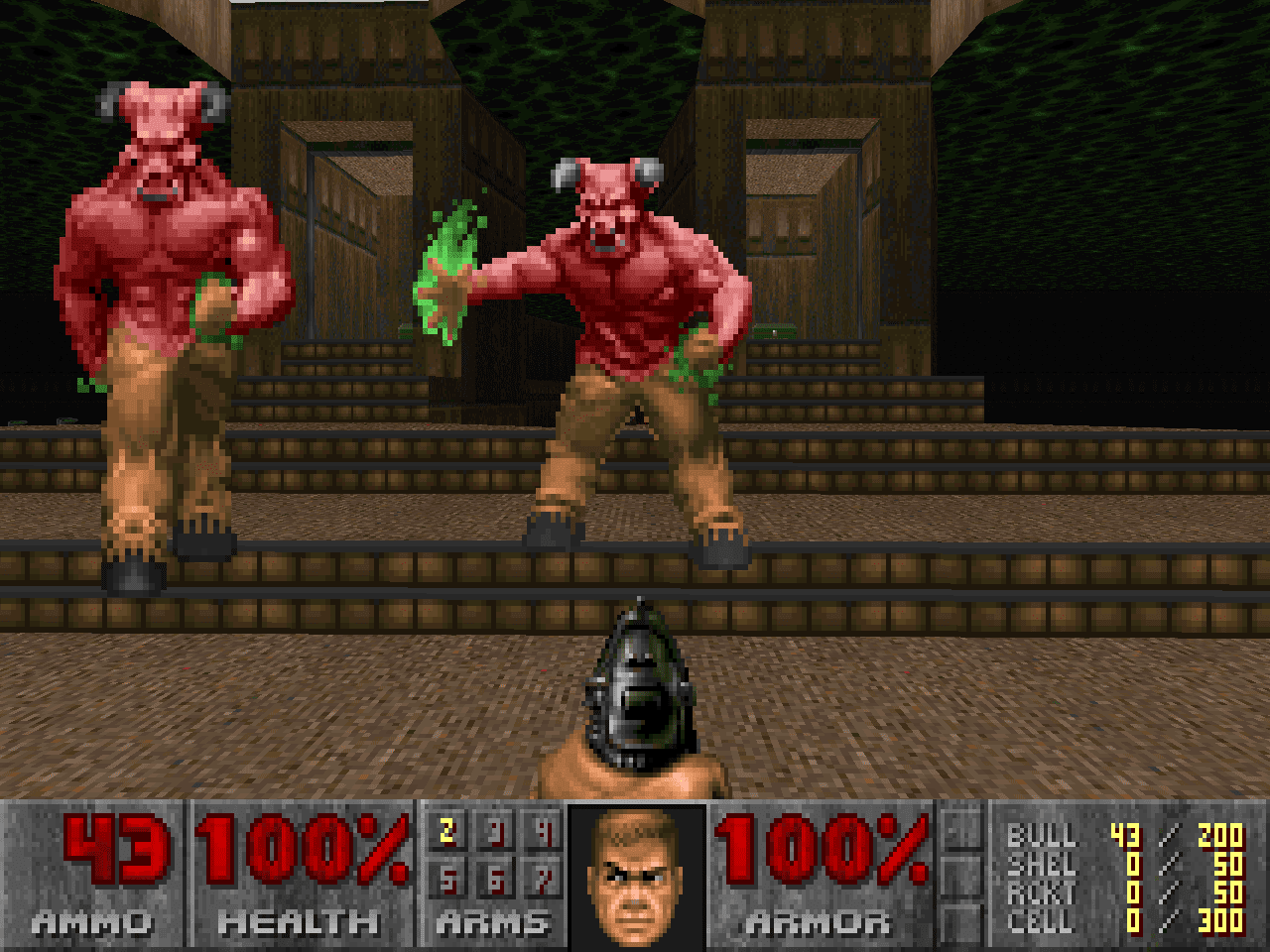 Meet the Barons of Hell.  The manual describes them as "tough as a dump truck and nearly as big", and that's a pretty apt description as they can sustain multiple hits from a rocket launcher and keep coming right at you, either hurling deadly green plasma or tearing you apart with their claws.  They even start showing up in later stages as normal enemies, though thankfully they're relatively sparse compared to other enemy types.

Oh yeah, and there are two even bigger, nastier bosses waiting for you at the end of later episodes.  Have fun with that!

Of course, you're also given a pretty solid variety of weapons to combat hell's hordes.  You star with little more than your fists and a basic pistol (which, as every DOOM fan knows, is complete rubbish and only exists so you have a fighting chance to get something better).  However, you'll soon come across a shotgun, then move up to a chaingun and rocket launcher for bigger enemies.  Episodes 2 and beyond also introduce the plasma rifle, which fires a constant stream of green plasma, and of course the game's most iconic weapon, the BFG 9000.  An enormous beast of a weapon that fires green bursts which decimate everything onscreen and deal massive damage to even boss characters.  It's usually well hidden though, so you'd better be up for some secret hunting! 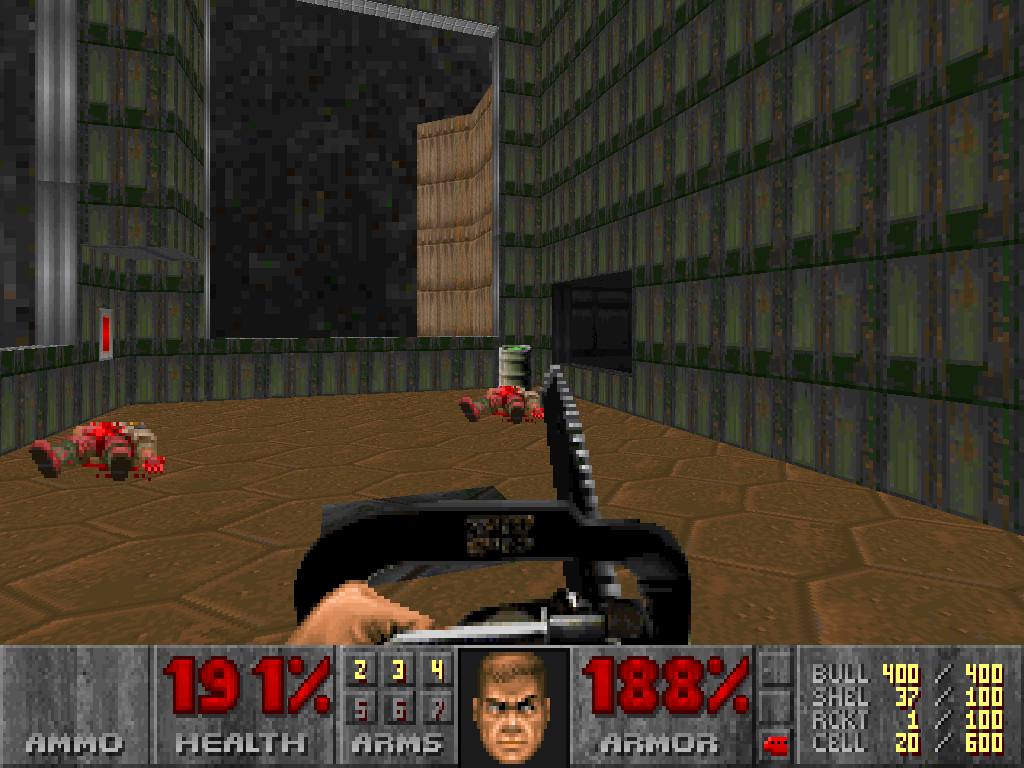 Ah yes, there's also a melee weapon in the from of a chainsaw.  Good, brutal fun.  And somewhat out of place on a Martian moon with no plant life, but I won't hold that against it.

Once again hailing back to its video game roots, there are also a number of temporary powerups the player can utilize.  From environmental suits and light amps to provide protection against toxic waste and darker areas to more fun ones like the "partial invisibility" (which makes enemies have a harder time targeting you) and the invulnerability sphere.  Or my favorite, the Berserk pack, which not only restores you to full health but multiplies the power of your punches tenfold, allowing you to splatter smaller enemies with one punch.  Very fun. 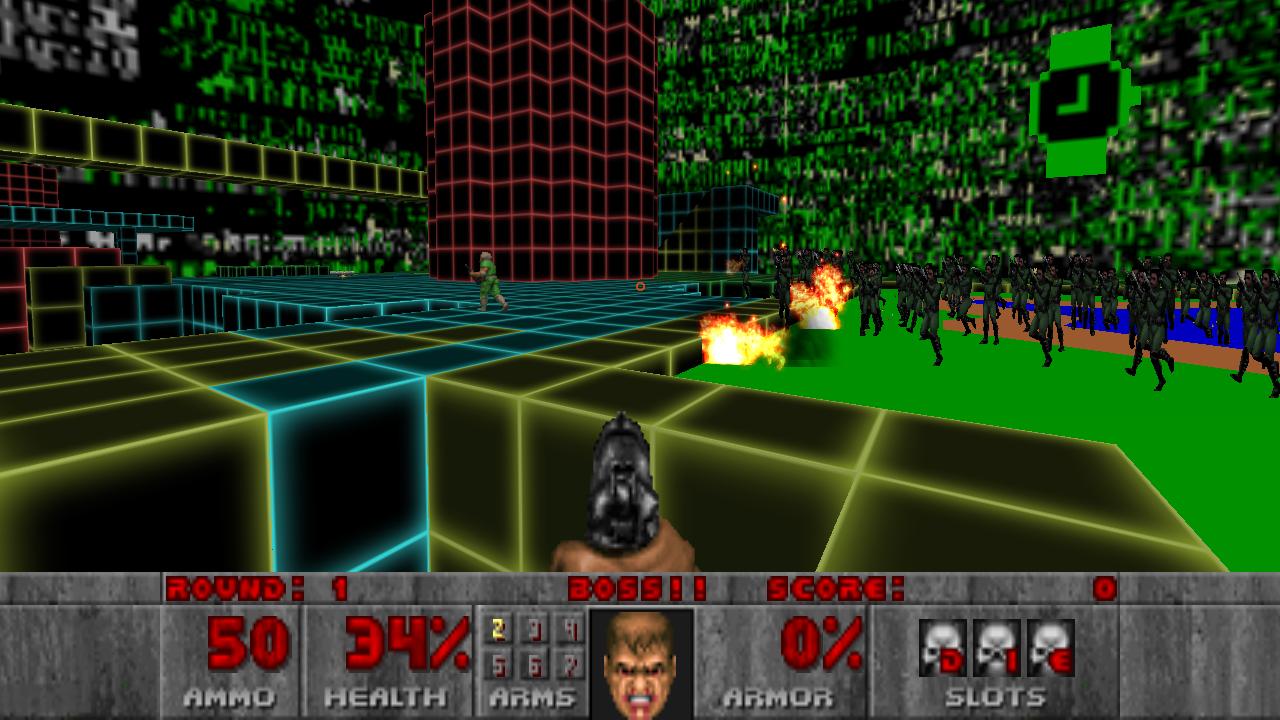 That stuff's all well and good, but DOOM wouldn't be the fondly remembered classic it is today were it not for one big thing: Replayability.  From square one, DOOM was intended to be a highly modifiable game, even having level-building tools packed in with the game itself.  From this thousands upon thousands of fan-made levels have been made and passed around the internet since its early days, and numerous fan tools only pushed this further by allowing things like weapon behavior and enemy AI to be modified, effectively allowing them to turn DOOM into almost another game entirely.

The real tipping point, however, came ten years after DOOM's release, when the game's source code was made public.  This allowed for source ports, total conversions, mods and even reconstructions of other games, all pushing the engine well beyond what was thought to be possible.  Everything from putting the player in a small environment and having waves of enemies attack Smash TV style to turning doom into a Roguelike or even a recreation of SNES games like Donkey Kong Country.  All things which, in no small part, lend themselves to turning DOOM into a game with virtually infinite replay value.

Chex Quest - A DOOM total conversion famously packaged in boxes of Chex in the mid 90s, turning it into a non-violent adventure where you play as a cereal-esque spaceman teleporting aliens back to their home planet.  Yes, it's silly, but it's a lot of fun, and it's worth checking out just for the cheesy CGI opening.  It's also a free download nowadays and even includes a third episode that was never commercially released, so that's a plus too.

Reelism - Effectively Smash TV in the DOOM engine, setting you in a small level and giving you random weapons, enemies and special effects to contend with as you try to rack up a high score.  Very addictive.

The Sky May Be - By the author's own admission, this is basically a mad science experiment intended to create something never before seen in the DOOM engine.  For better or worse it succeeds in that endeavor, sporting some truly bizarre level design, surreal enemy behavior and a lot of off-the-wall humor.  Even almost two decades after its release, there's still no clear consensus on whether it's a work of genius or the worst DOOM level ever created...


In short, DOOM is an indisputable masterpiece of PC gaming.  While it may have been surpassed in technology, its gameplay remains the gold standard for the genre, mixing equal parts puzzle solving, fast-paced combat and strategy.  Not to mention a huge, thriving modding community that exists to this day providing an endless amount of new content and conversions to continually keep things fresh for old and new players alike.  A definite A+ in my book.

As an added bonus, here's an actual Microsoft presentation from 1995, featuring Bill Gates chromakeyed into the game: